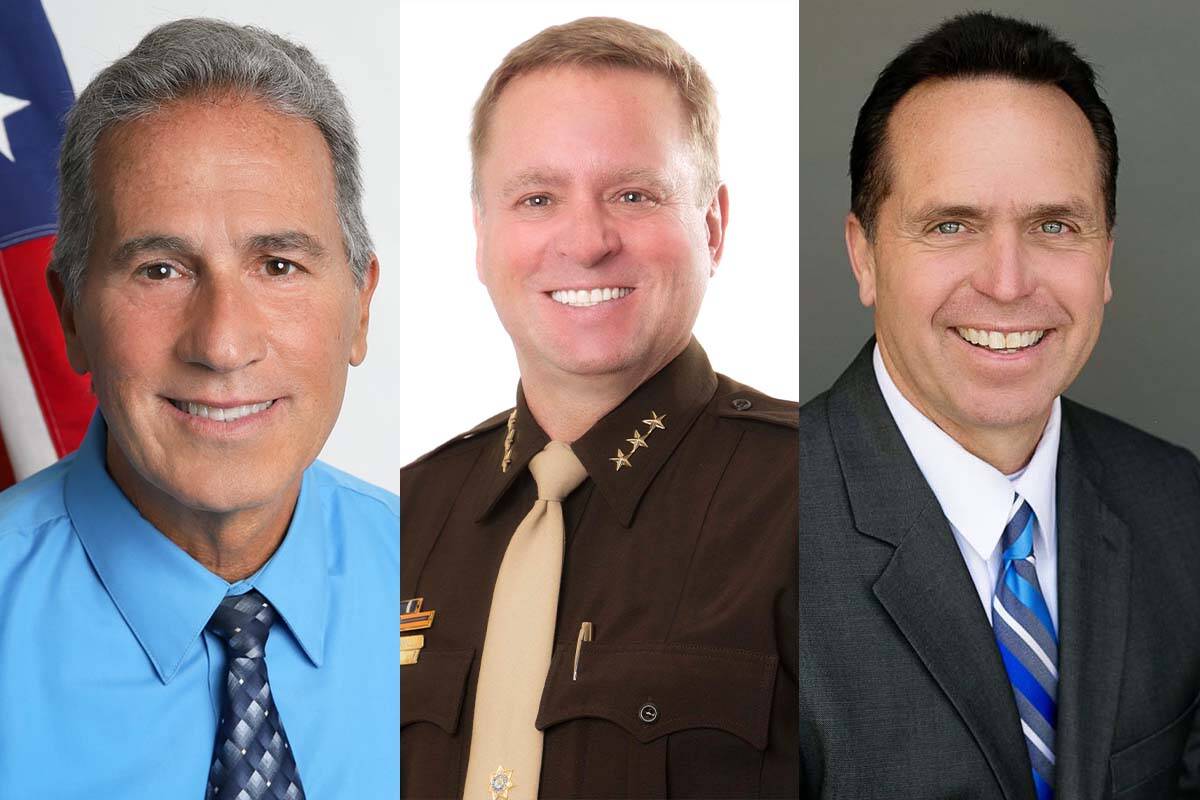 There will be a new sheriff in town come January 2023.

After nearly eight years at the helm of the Metropolitan Police Department, Clark County Sheriff Joe Lombardo’s bid to become governor opens the door to three Metro veterans vying for his position.

The sheriff’s race pits former Undersheriff Kevin McMahill, Nevada Assemblyman Tom Roberts, who retired as an assistant sheriff, and Stan Hyt, a retired Metro sergeant with 30 years of experience, against each other.

McMahill appears to be the establishment candidate, leading in fundraising, and endorsements from Nevada police unions, Lombardo and other former sheriffs.

“I love this police department. I love this community and I know what good policing looks like,” he said. “Nobody in the race has the experience that I did in running Metro for six years (as undersheriff).”

McMahill said he was an integral part of the department during the “most difficult and challenging” times in the Las Vegas Valley, including the Oct. 1, 2017, mass shooting and the “summer of unrest” following the murder of George Floyd by a Minneapolis police officer in 2020.

But Roberts and Hyt do not want to be counted out.

“It’s a job that I think I prepared myself my entire career for,” said Roberts, citing his 34 years with Metro, including his decade-long tenure in the department’s executive management team. “It’s something I love.”

Hyt said irregularities and fraud during the 2020 election (allegations that have been repeatedly disproven) and the department’s pandemic response inspired his run.

A candidate who gets more than 50 percent of the vote during the June 14 primary would win the race outright. Otherwise, the top two vote-getters will advance to the November 8 general election.

Thinking Lombardo was running for re-election, McMahill left the department at the end of 2020, only announcing his run after Lombardo said he would step down to run for governor.

Under McMahill, Metro would “double down” on its community policing efforts, and work with lawmakers to address mental illness, homelessness and drug addiction, which he said proliferate crime and pack the Clark County Detention Center.

“I think it’s a real opportunity for us to have a conversation around how it is that we can continue to treat those individuals,” he said. “Because we also know is that incarceration doe not fix a single one of those things.”

He vowed that if elected, Metro would become one the most technologically advanced police departments in the U.S., to reduce use of force and even streamline processes such as the release of body-worn camera footage, which he agreed was unaffordable to regular citizens. He said he would also explore ways for Metro’s operating budget to absorb some of those costs.

“I don’t believe we have anything to hide, and I think it’s important that we are open and transparent,” he said. “I’ll have to go back there and look at why we got to a place where it costs that kind of money to do it.”

McMahill said that the department was down about 275 officers, and he said his administration has worked on recruitment and retention.

“I think we have to make sure that we make a better job at getting into our local communities and convincing people of the importance of being part of this organization, so that we can continue to make it better,” he said.

McMahill’s campaign was roiled in recent weeks by allegations of wrongdoing dating to his time as a patrol officer, when a supervisor recommended he be terminated. He kept his job, however, and rose through the ranks despite the charges, which he has denied.

Roberts, who served two terms in the Nevada Assembly, touted his bachelor’s and master’s degree, in education and human relations respectively, and said he achieved “the highest level of executive, post-certification in the state.” He also spent time with the Major City Chiefs Police Executive Leadership Institute.

His experiences as a legislative liaison with Metro, and serving in the Legislature, gives him an upper hand, he said, adding that he was able to look at policing “outside in” and working with budgets.

“Metro does a really good job on a lot of things, I just don’t think that we’re touching every aspect of our communities, specifically our youth,” he said. “I think there are some stakeholder groups that we’re not engaging. For us to be really effective and to have really good, sound law enforcement strategies, we need to engage those people and listen to what they have to say and what their priorities are.”

The valley is experiencing rising crime and traffic fatalities and his administration would lean on academia and “evidence-based” policing to combat them, he said. “I believe we are all over the place when it comes to some of our strategies,” he said about the current state of Metro.

Traffic fatalities could be reduced with increased patrolling and enforcement on troubled roads, he said.

Asked about transparency, he mentioned body-worn cameras, but said the department could do a better job at making the footage available. “The taxpayers are already paying for that,” he said. “I don’t think that that should be passed down to the cost of reviewing and getting that video out. I think there needs to be some adjustments made there.”

Out campaigning, he hears complaints on the “customer service” aspect of Metro, such as non-emergency call centers and those trying to obtain concealed weapon permits. He said that can be alleviated through technology and partnerships with private entities.

“We’re down on manpower,” he said. “We’re losing officers at the top end … now we have a very inexperienced police department and we need to get that maturity back. We need to get more officers, we need to replenish so that we can handle the crime that is basically exploding before us.”

His administration would refocus its efforts into combating sex trafficking, and Metro would re-establish a partnership with immigration authorities to deport those who have committed crimes, he said.

His officers would address violent crime by “dealing with the small things,” such as minor crimes. “We just let it go because we haven’t got the manpower. Those things lead to bigger things,” he said.

To reestablish communication with the community, Hyt would overhaul the non-emergency call centers.

Metro is not transparent enough, and that leads to mistrust, he said.

“When we’re doing good things, they need to hear about what Metro is doing,” he said. “And if we do mess up, we need to own it, come forward with it.”