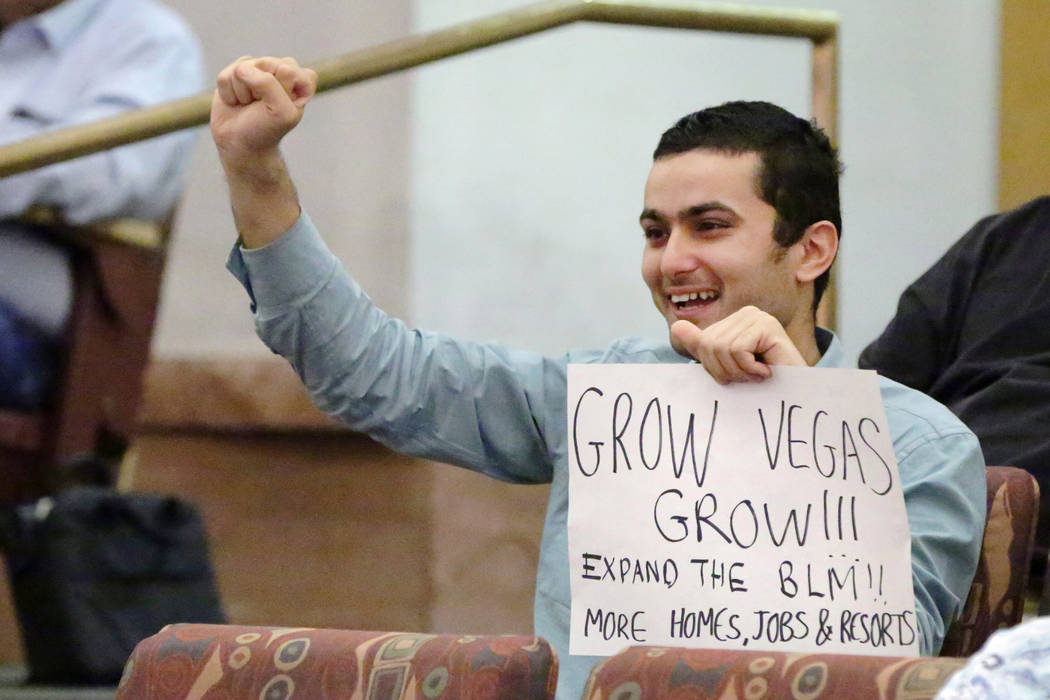 Cyrus Hojjaty shows his support of a resolution seeking federal legislation to open 44,000 acres of public land for development during a meeting of the Clark County Commission on Tuesday, June 19, 2018. (Michael Quine/Las Vegas Review-Journal) @Vegas88s 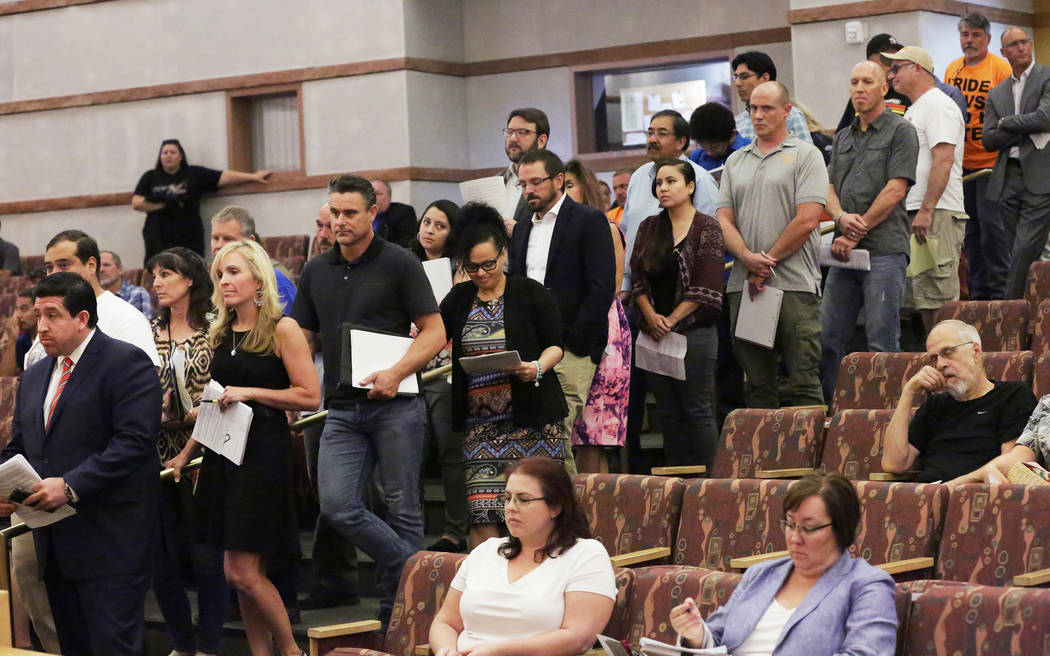 During meeting of the Clark County Commission on Tuesday, June 19, 2018 proponents and opponents line up to speak on a resolution seeking federal legislation to open 44,000 acres of public land for development and set aside more than 300,000 acres of new wilderness and protected areas for the desert tortoise and other threatened species. (Michael Quine/Las Vegas Review-Journal) @Vegas88s 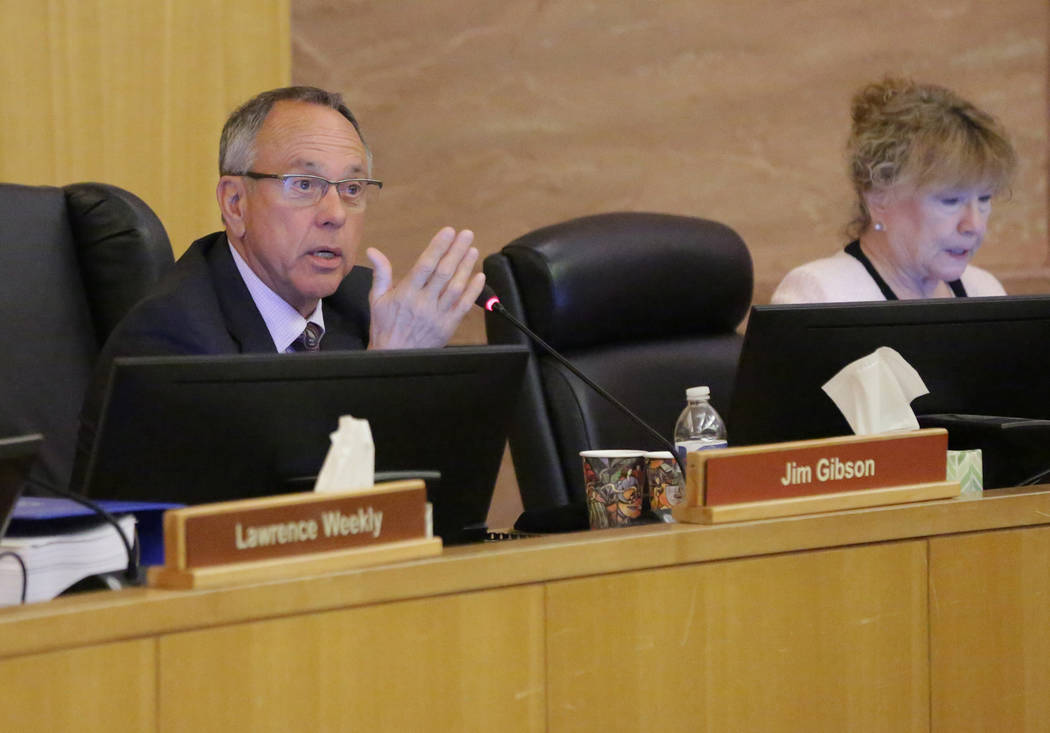 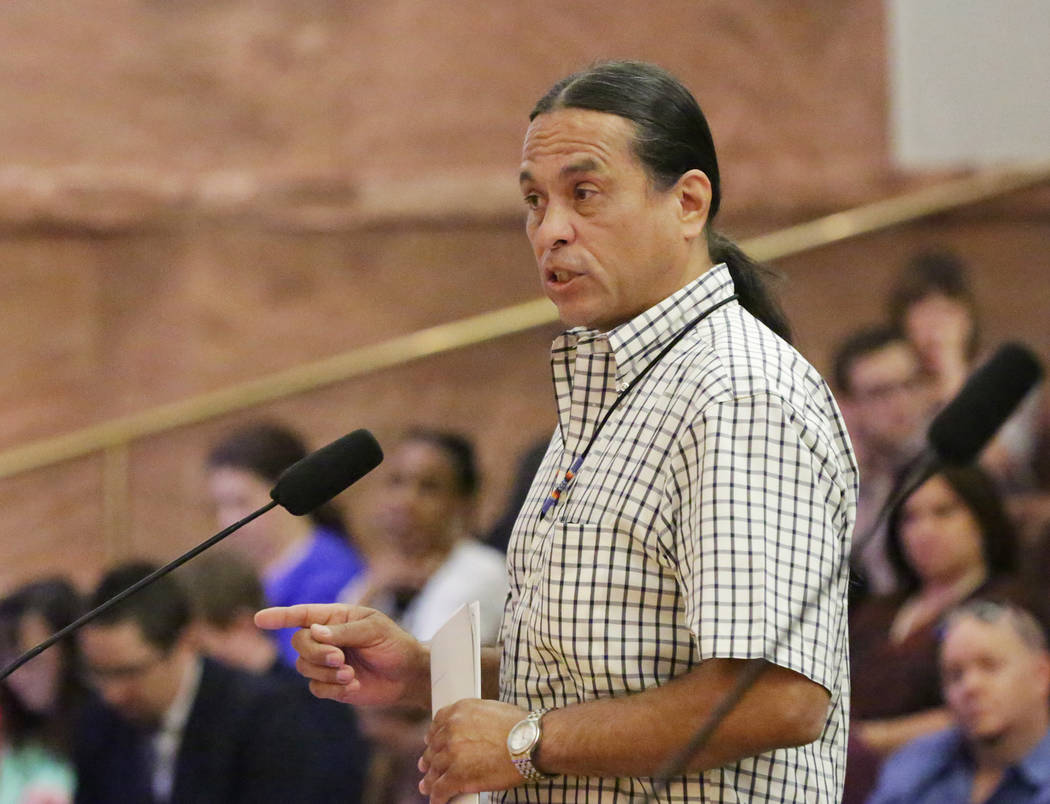 Ian Zabarte, principal man for the Western Bands of the Shoshone Nation, expresses his concerns over a resolution seeking federal legislation to open 44,000 acres of public land for development and set aside more than 300,000 acres of new wilderness and protected areas during a meeting of the Clark County Commission on Tuesday, June 19, 2018. (Michael Quine/Las Vegas Review-Journal) @Vegas88s 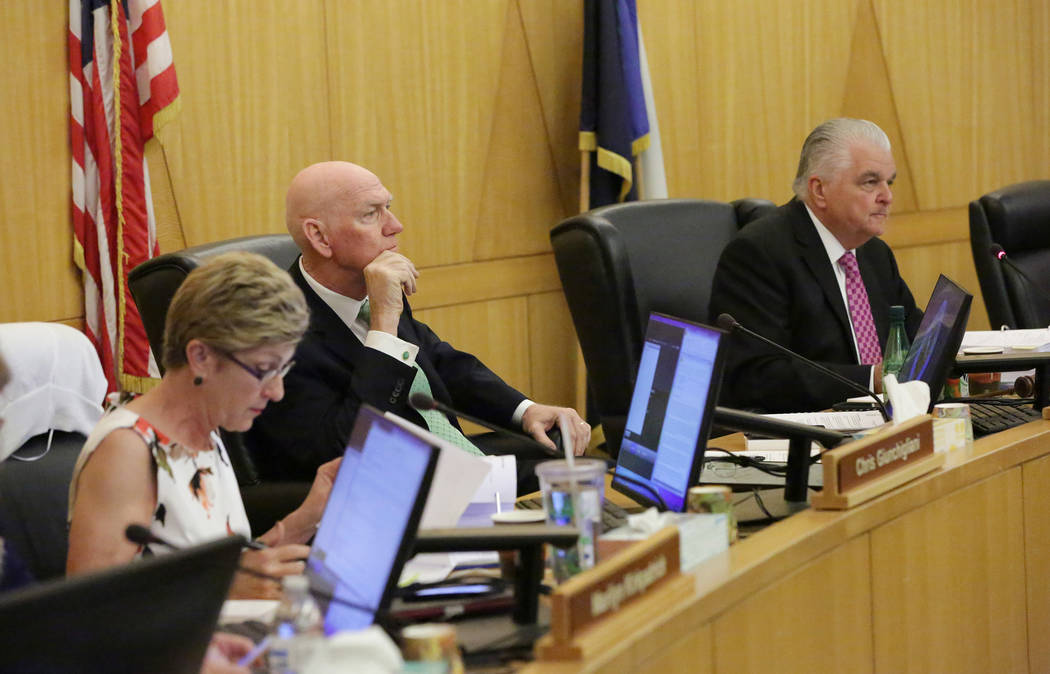 Clark County Commissioners Chris Giunchigliani, left, Larry Brown and Steve Sisolak listen to comments from the public before voting on a resolution seeking federal legislation to open 44,000 acres of public land for development and set aside more than 300,000 acres of new wilderness and protected areas during a meeting of the Clark County Commission on Tuesday, June 19, 2018. (Michael Quine/Las Vegas Review-Journal) @Vegas88s

Clark County commissioners approved a resolution Tuesday calling for federal legislation to open more than 44,000 acres of public land for new development south of Las Vegas and set aside more than 300,000 acres of new conservation land in the county.

The 6-0 vote came after almost two hours of mostly negative input from the audience, including a large contingent of off-road vehicle enthusiasts angry at the prospect of losing prime recreation land.

Commissioner Larry Brown did not take part in the discussion or the vote.

The four-page resolution will be forwarded to Nevada’s congressional delegation to guide the drafting of a sweeping bill that could steer growth in and around the Las Vegas Valley for decades.

Most of the 44,573 acres of federal land the county wants for future development is south of the valley between Sloan and Jean, where officials envision a large commercial manufacturing and distribution hub along Interstate 15 and new residential neighborhoods east of the highway in Hidden Valley.

If granted by lawmakers, that land would be developed using “smart growth planning strategies” designed to protect Red Rock, according to a separate resolution also approved by the commission.

County officials have been working on the broader resolution with input from a select group of stakeholders since last year, but they didn’t release the proposal to the general public until June 6.

Since then the amount of federal land being sought for development has grown from an estimated 38,636 acres to the current 44,573, and the county has released several conceptual maps that appear to contradict one another.

A map handed out by county officials at Tuesday’s meeting was different from one, apparently produced in error, that was still posted on the county’s website later in the day.

Several audience members complained about the lack of specific information and time for public input prior to the vote.

“It appears that just a small handful of developers and environmental groups were consulted in the development of this proposal,” said Patrick Donnelly, Nevada director for the Center for Biological Diversity, an environmental group. “It has all the hallmarks of a smoky backroom deal.”

But several conservation groups that worked with the county expressed support for the finished product, which calls on Congress to designate almost 83,000 acres of new wilderness and nine new “areas of critical environmental concern” on almost 293,000 acres across Clark County.

By protecting desert tortoises and other listed species in those nine areas, county officials hope to eventually unlock an equal amount of federal land for development.

Donnelly called that a “total subversion of the Endangered Species Act.”

“This would set a terrible precedent, where cities and counties across the country would run to Congress every time they want to develop on endangered species’ habitat,” he said. “Scientists and wildlife professionals, not politicians, should determine what’s best for the tortoise.”

County Air Quality Director Marci Henson, who headed up the drafting of the resolution, called it a county and local city “wish list” of land-related changes that require approval from Congress. Other provisions would add 41,000 acres to the Moapa River Indian Reservation, transfer to local control any federal land where schools, parks, flood control basins and other permanent public facilities have been built, and use fee money collected at Red Rock Canyon to reimburse county police and fire services for emergency calls at the conservation area.

“To us, this is the very first step in the process of letting the congressional delegation know what we want in a bill,” she said.

Henson said county officials will work closely with lawmakers as they write the bill and bring the draft legislation back to the commission for another vote once it’s finished.

County officials said the process could take several years, with additional opportunities for public input along the way.

But the loudest opposition came from off-roaders, who showed up in force, some dressed in bright orange T-shirts that read, “I ride OHVs and I vote.” Of the dozens who addressed the commission, many said they were tired of being forced out of areas where they have been recreating for decades and mad about not being consulted in advance.

Donald Jackson, operations manager for the Best in the Desert Racing Association, said no one but developers seems to like what the county has planned.

“When you have the Sierra Club and the off-road community on the same page, you need to reevaluate your proposal,” he said.

Josh Martelli, co-owner of the Mint 400 off-road race, said the proposed land changes would all but kill the world famous, 50-year-old competition by eliminating as much as half of its course through southern Clark County.

Henson said the Mint 400 should be able to finish out its current permit with the Bureau of Land Management, which lasts through the race in 2023. After that, though, she acknowledged that future of the race could be in jeopardy in a county that is running out of land for new growth.

“There are difficult decisions in front of us, and some trade-offs to be made,” Henson said.