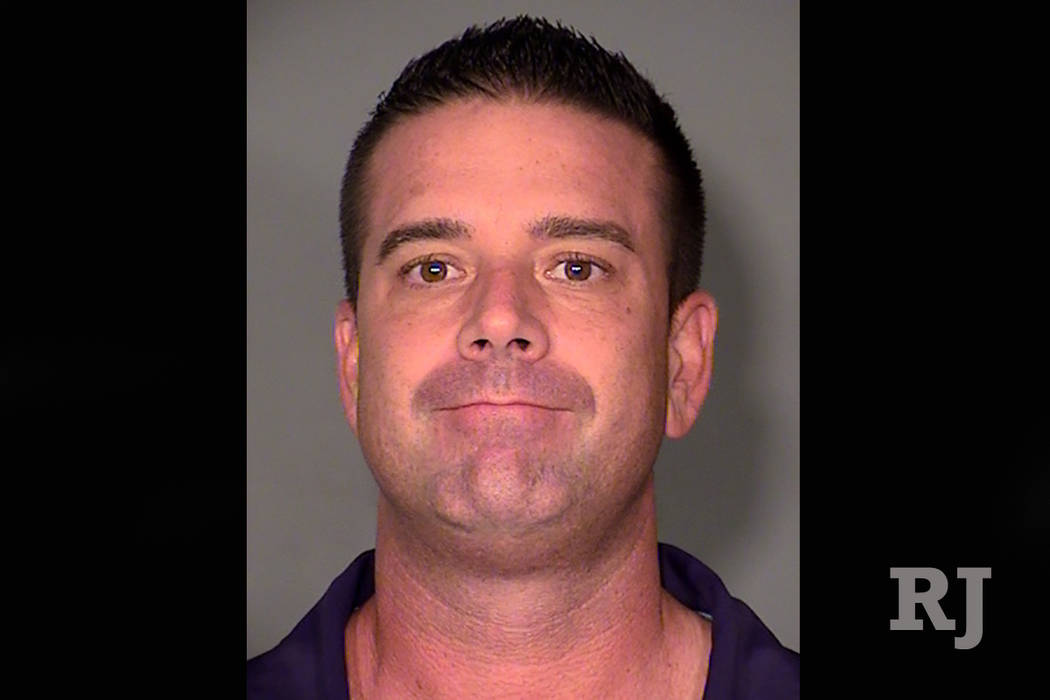 Aaron Manfredi, 42, was arrested on felony charges in 2012 and again in 2015. He is running for Clark County public administrator. (Las Vegas Metropolitan Police Department)

A Republican candidate for Clark County public administrator was convicted of a gross misdemeanor in 2015 following accusations that he had sex with a pregnant teenage inmate at the county’s juvenile detention center, police and court records show.

Aaron Manfredi, a probation officer at the time of his arrest in 2012, was charged with sexual assault of a minor. He pleaded no contest to a lesser charge and was stripped of his Nevada law enforcement certification.

In the weeks following his conviction, police arrested Manfredi again after a woman he was dating accused him of choking her during an argument at his home. A jury acquitted him of domestic battery.

Manfredi, 42, said in a phone interview Friday that the allegations against him in both cases were false.

“At some point, we have to accept the fact that men can be victims,” he said.

Today, the California native works in sales at a landscaping company and is also executive director at the Las Vegas nonprofit Asperger’s Training, Employment and Life Skills. Manfredi said the organization has helped find jobs for more than 165 adults with high-functioning autism and other disorders.

“Those who work with me and continue to do so with different organizations across the valley, at the end of the day, they know I’m a man of integrity,” Manfredi said. “These events are unfortunate, and I’ve moved past it. While some may judge me for these accusations, I would encourage voters to look at my long record of being active and helping those in our community who need help.”

But Manfredi’s sole opponent in the Republican primary for public administrator said the arrests and conviction call into question his ability to hold the office.

“It’s a problem,” said Thomas Fougere, a 62-year-old Henderson resident and real estate broker. “The very nature of the public administrator is a really important matter of trust. That’s basically the linchpin. … You’re talking about people at their most vulnerable when they’re grieving. You’ve got to have a bedrock of trust and honesty.”

Manfredi’s criminal conviction stems from his five-year career as a probation officer at the juvenile detention center.

A teenage inmate alleged that Manfredi coerced her to have unprotected sex with him in a laundry room at the detention center on North Pecos Road in winter 2009, according to court documents.

The pregnant girl testified she believed that if she didn’t have sex with Manfredi, he would blemish her record, causing her baby to be taken away when it was born.

The alleged crime came to light in early 2012 when the girl’s former cellmate told Metro officers about it during a misconduct investigation into Manfredi.

In May 2015, Manfredi pleaded no contest to conspiracy to commit coercion, a gross misdemeanor. Last year, the court allowed him to withdraw his plea and plead guilty to a misdemeanor charge of disorderly conduct.

Manfredi maintains his innocence and claims that his accuser’s story was fabricated and had shifting details, such as the month the alleged crime occurred.

“My family and I wanted to move on past this. There was no set time when trial was going to be,” Manfredi said. “What I did was what any reasonable person would do after dealing with this for so long.”

The court sentenced Manfredi to unsupervised probation and told him to stay out of trouble.

But less than two weeks later, police were investigating him again after a woman he was dating accused him of trying to strangle her. Manfredi was charged with a felony count of domestic battery.

The case went to trial in September 2016, and dueling narratives emerged.

The woman dating Manfredi said they were alone when the alleged battery occurred. He wanted her to leave his home after an argument. According to the woman, when she tried to leave, Manfredi grabbed her around the throat until she began kicking and scratched him.

“I thought I was going to die,” she testified.

But a longtime friend of Manfredi’s testified that he was in the room, too. James Taylor said he saw the woman attack Manfredi when he tried to take her bags to the door. Manfredi, he said, never touched the woman.

“He was in full retreat,” Taylor testified.

Manfredi and the friend, a former military police officer, were not present at the home when police arrived.

The jury acquitted Manfredi after a four-day trial.