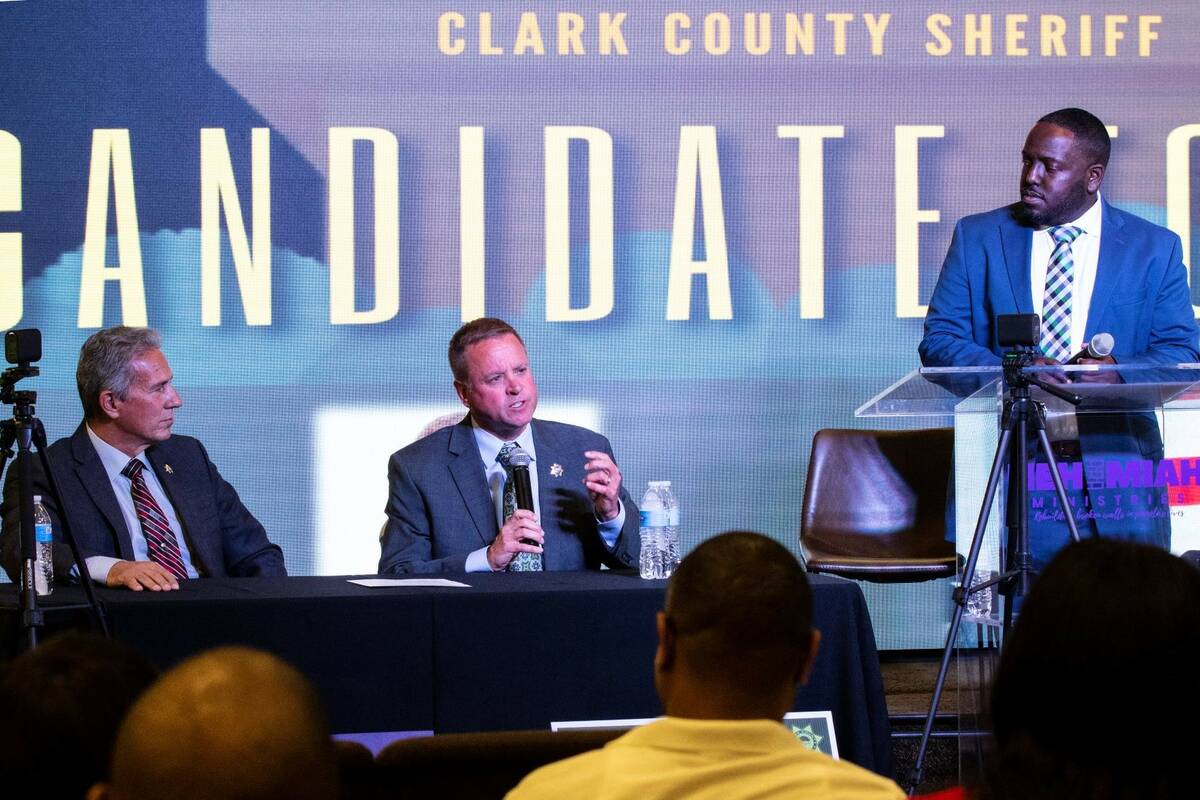 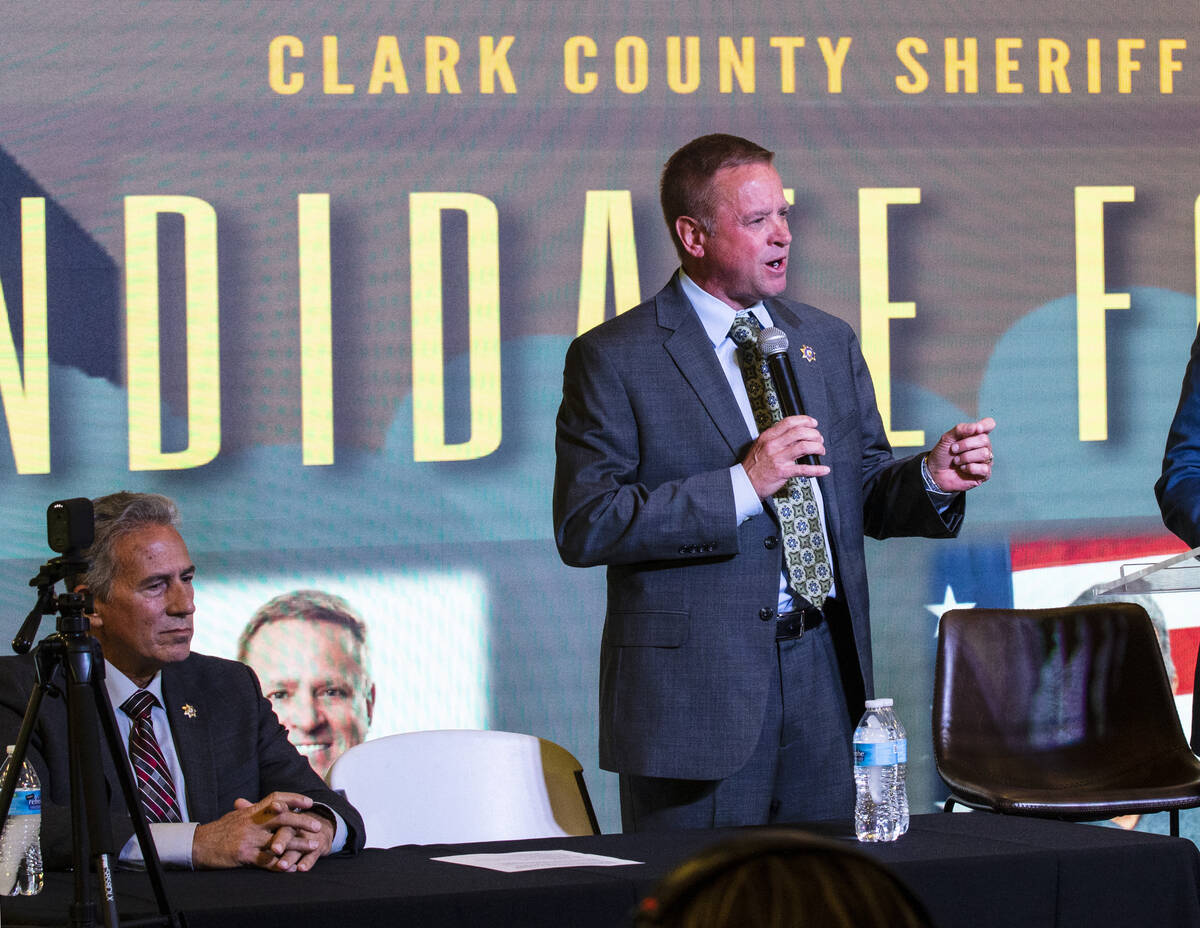 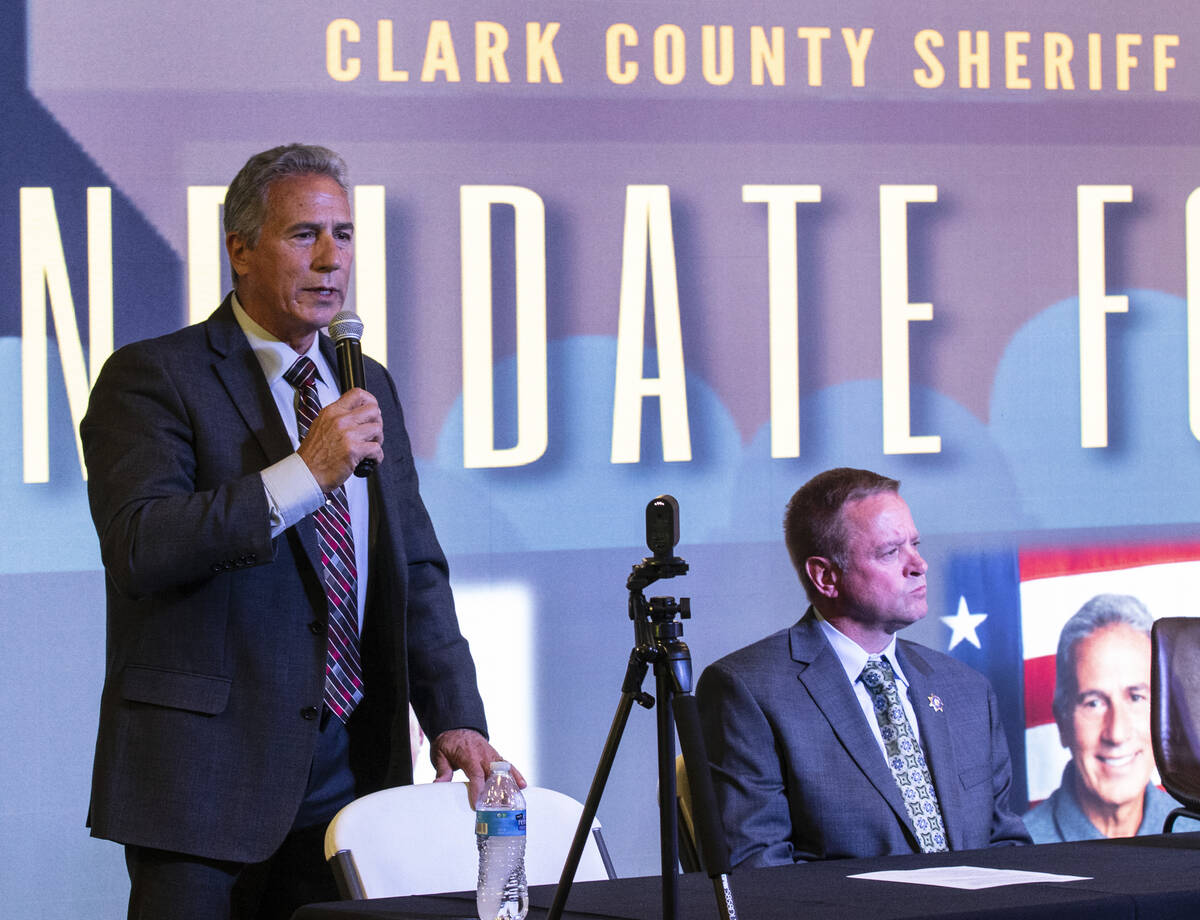 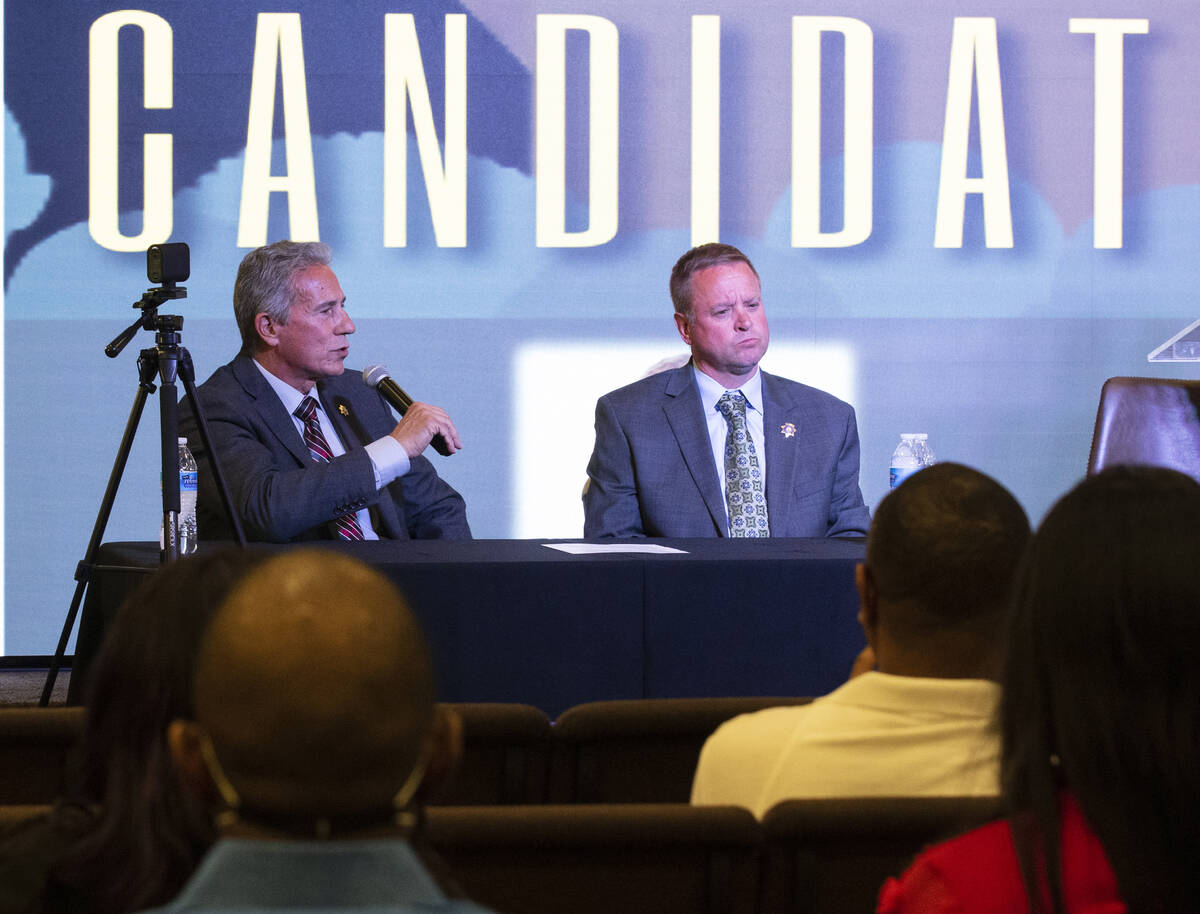 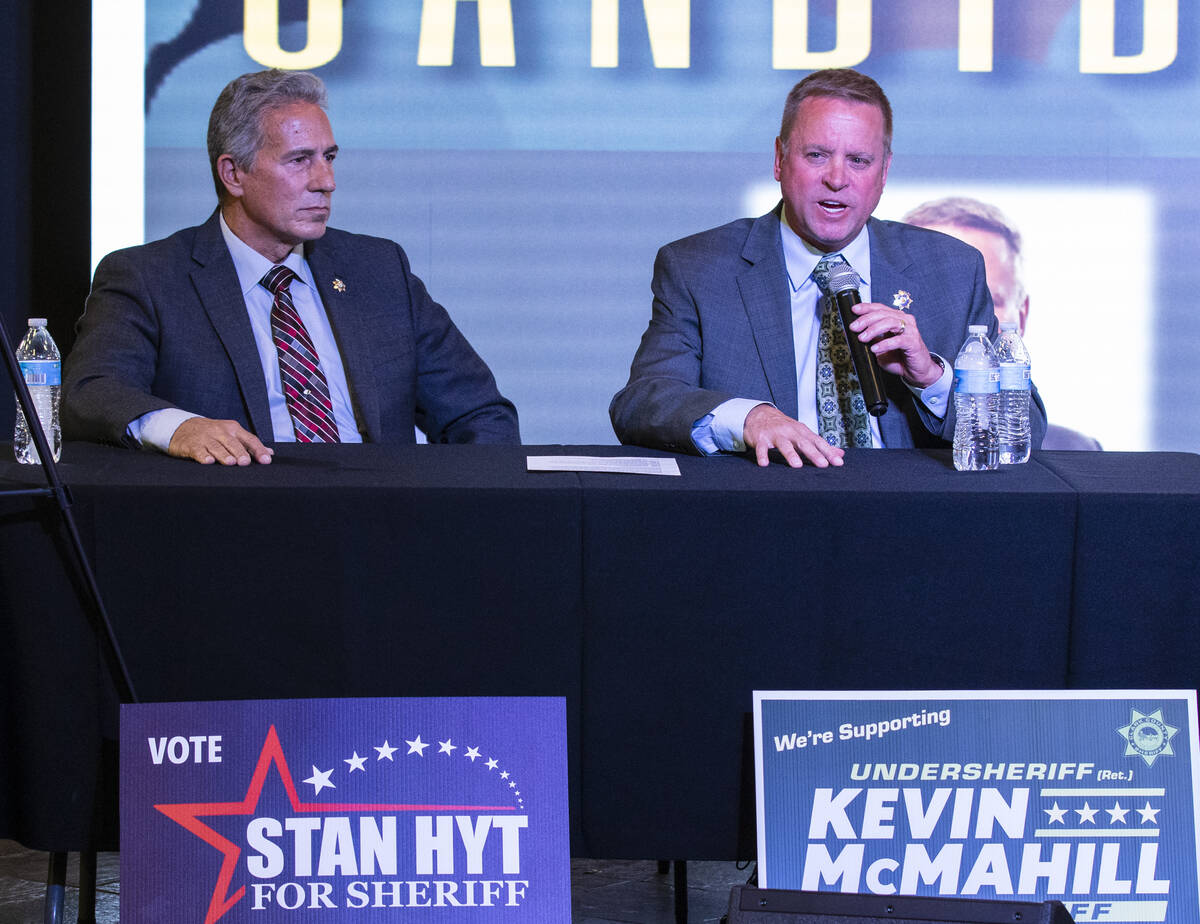 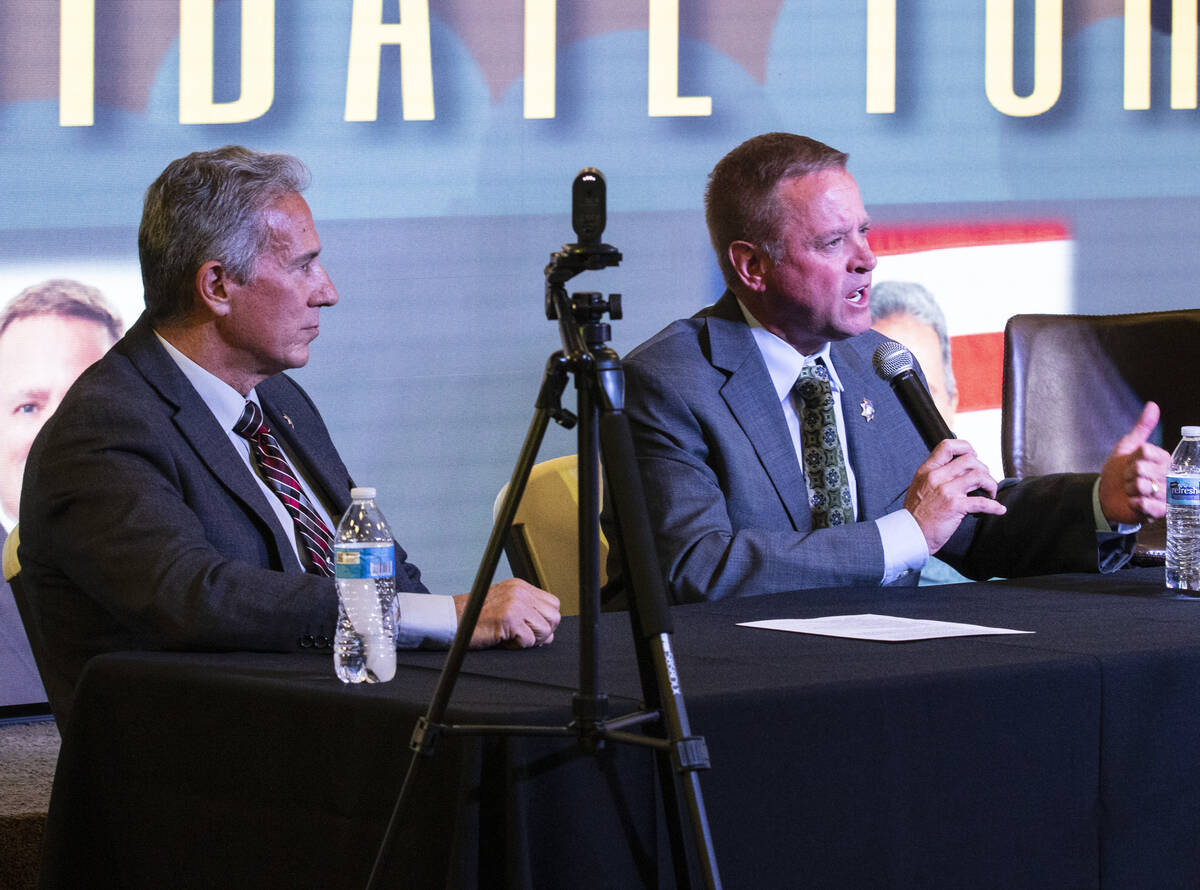 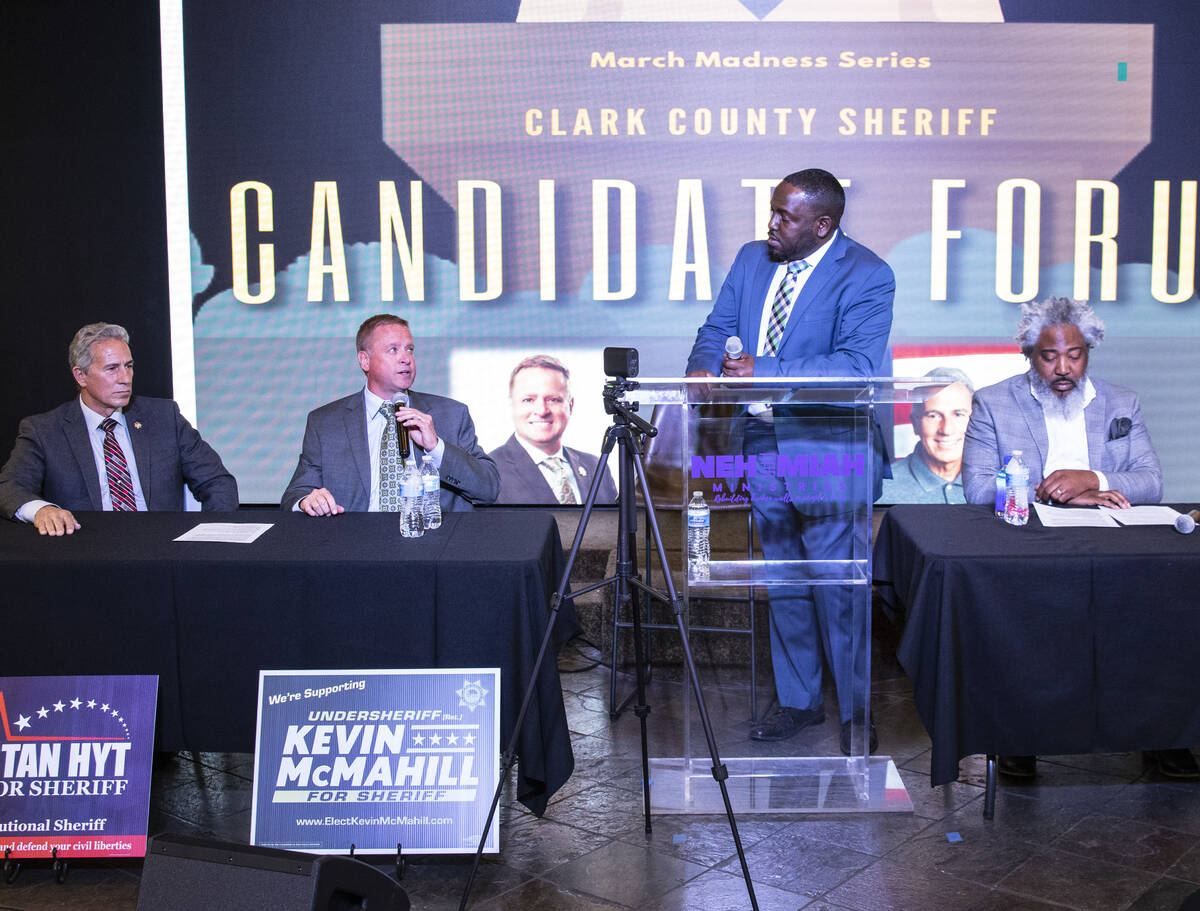 Two of three Las Vegas police veterans vying to become the next Clark County sheriff spoke at a panel Thursday night, discussing how the agency would hire and diversify the force, and how they would deploy technology and police low-level offenses.

Former Metropolitan Police Department Undersheriff Kevin McMahill emphasized community policing and a change in culture, while retired Sgt. Stan Hyt said he would use his faith, the Constitution and small-government mentality to guide his policies.

“Nobody stacks up against me when it comes to leading this organization,” McMahill told the crowd of a few dozen at Nehemiah Ministries in northwest Las Vegas. “I’m invested in you. I’m invested in this community.”

The Candidate’s Forum was part of a series of panels organized by the Clark County Black Caucus and local chapters of the American Civil Liberties Union and NAACP.

Tom Roberts, the other candidate in the three-way race to replace Sheriff Joe Lombardo, who is running for governor, did not attend. The Nevada assemblyman was out of town on “legislative duty,” Kami Dempsey, Roberts’ campaign manager, said in a text message.

“He conveyed this to the person who invited him which he also felt like he was an after thought since it seemed that the event worked around McMahill’s schedule,” the message said. “He is extremely disappointed he can’t be there.”

McMahill received the loudest cheer of the night when he mentioned Roberts’ absence, mentioning that the assemblyman is running for sheriff, not for re-election in the Legislature.

“I don’t know how not running for the Legislature can be any more important than showing up to a sheriff’s forum hosted by the NAACP and the ACLU,” he said.

McMahill has significantly outraised his opponents and is endorsed by Lombardo and other former sheriffs.

According to financial disclosures filed with the Nevada secretary of state in January, McMahill was leading his opponents in campaign fundraising with about $1.3 million. He was followed by Roberts, who had raised $114,000, and Hyt, who had raised $8,830.

At the two-hour event, the candidates were asked questions on race and policing, police technology and privacy concerns.

Recruitment needs to be taken to underrepresented communities, and mentorship will be key to diversify the agency, McMahill said.

Hyt spoke against hiring practices based on gender and race, calling the it a “handout” rather than a “hand up” by qualified candidates.

Both agreed on loosening strict hiring policies that might disqualify someone for small errors committed in their past. They did not expound on what that would look like, but McMahill has mentioned past marijuana use.

The philosophy of the two candidates on immigration and policing also differs.

“Immigration (enforcement) is not the responsibility of local law enforcement,” McMahill said.

Hyt, who said he believes in “closed borders,” said that immigration “is a police issue, and I think it needs to be dealt with,” noting that under his rule, Metro would strengthen its relationship with federal immigration authorities.

Both candidates embraced the use of police technology.

Under McMahill, Metro would be “one of the most technologically advanced,” he said. That would include street cameras to record, but not to store data for too long.

Hyt said he supports technology as long as there is no profiling, and the information is only used for crime “detection, prevention and investigation.”

5
Pharmacy board appeals ruling that bars it from regulating marijuana