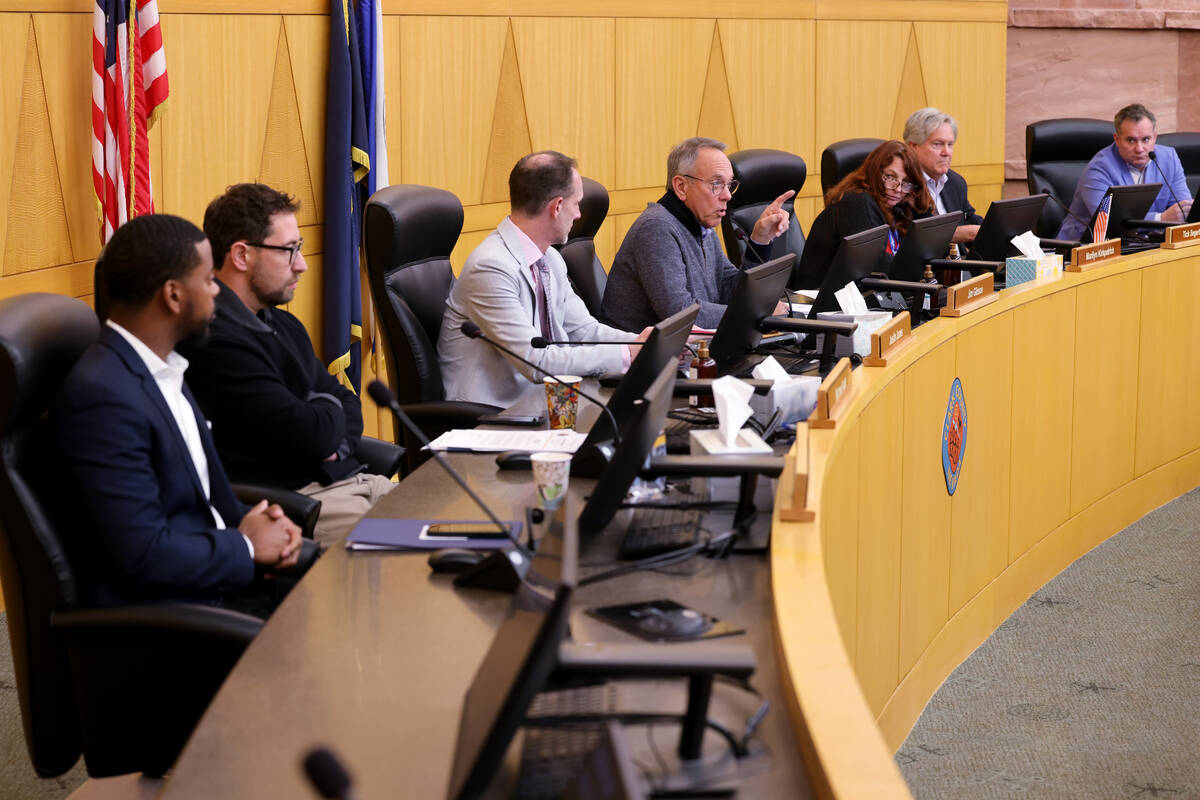 Clark County Commission Chairman Jim Gibson, center, chastises a member of the audience for an outburst during a commission meeting at the Clark County Government Center in Las Vegas Friday, Nov. 18, 2022. Commissioners voted unanimously to approve the results of the election. (K.M. Cannon/Las Vegas Review-Journal) @KMCannonPhoto

The Clark County Commission voted unanimously Tuesday to adopt an ordinance that will allow for creating community education advisory boards.

The action comes after commissioners introduced an ordinance in December. Each commissioner will have the option of creating one or more advisory boards within the district they represent, as long as it’s an unincorporated area of the county — not within a city.

Commissioner Tick Segerblom, who brought the proposal forward, told fellow commissioners he thinks it’s a great idea for his district.

“And truthfully, it’s a concept, so the details haven’t been worked out, but this would allow us to create this kind of a structure,” he said.

Under state law, local governments are allowed to create education advisory boards. Some, including North Las Vegas and Henderson, already have one. And there are similar groups in the Moapa and Virgin valleys.

The Clark County School District provided a statement Tuesday to the Las Vegas Review-Journal that was identical to the one it provided last month when the ordinance was introduced: “We welcome opportunities to continue engaging community members in support of our students and their academic success.”

Segerblom said commissioners can choose whether to create an advisory board in their district.

Advisory boards, which would meet at least quarterly and have unpaid members, would hold public meetings and be subject to the open meeting law.

A commissioner who chooses to create an advisory board would bring back a resolution outlining details such as how many members it would have and which geographic area it would cover.

“I support the creation of this because I think civic engagement and direct democracy are really important in our state, and we need more Nevadans being engaged so they know what’s going on,” College of Southern Nevada history professor Sondra Cosgrove said.

Cosgrove said she has been a professor at the community college for about 20 years.

“What’s going on at CCSD is getting worse. It’s bad,” she said. “We’ve got to do something.”

Dianna Walker, a member of the Moapa Valley Community Education Advisory Board for about 10 years, called education advisory boards a critical resource.

She said the school district has not always been able to recognize or provide support that rural areas need.

The boards provide real-time assistance to students and schools instead of relying on a time-consuming bureaucratic process, Walker said.

Parent and education advocate Anna Binder said she supports the idea. She noted that she sent a message to Commissioner Marilyn Kirkpatrick more than a year ago with a broad idea of what the commission could do with an education advisory board.