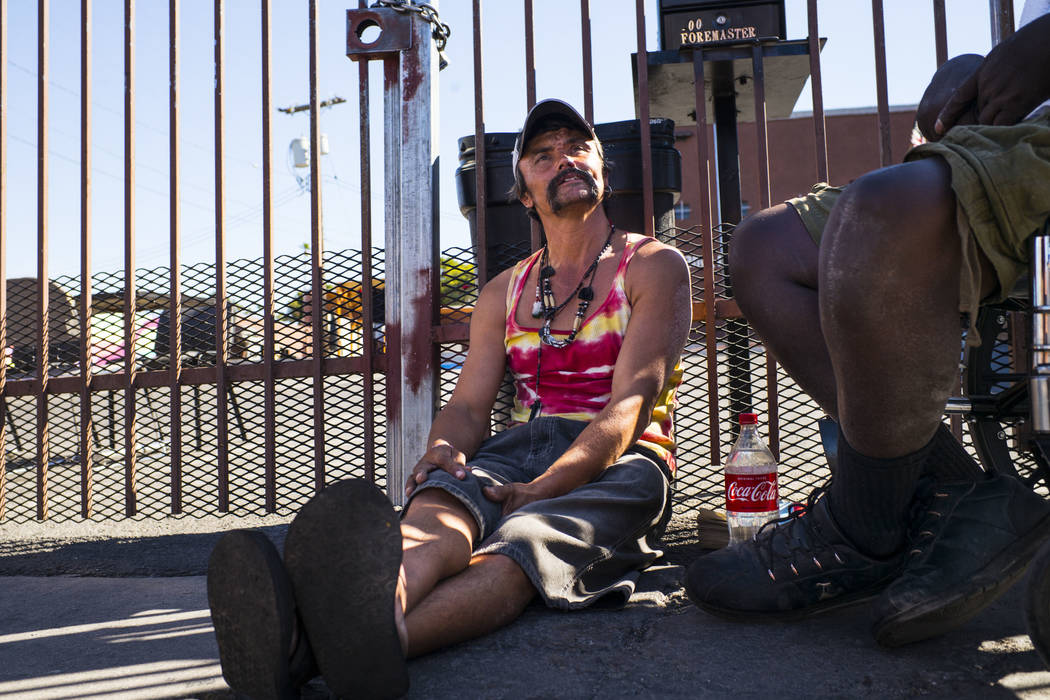 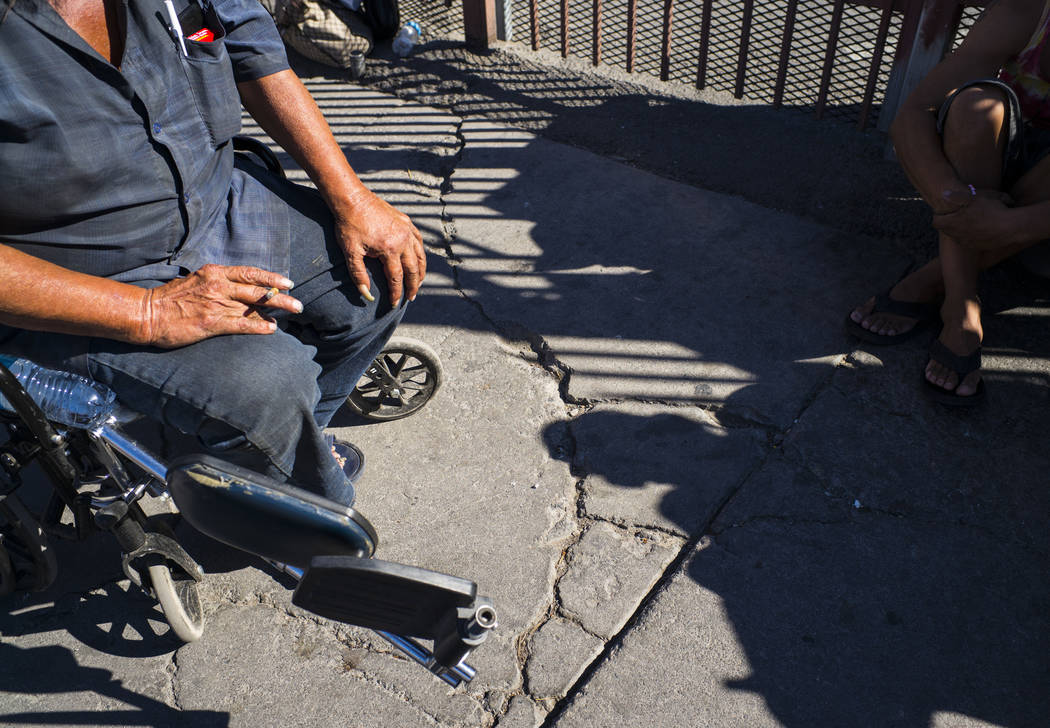 TJ, who declined to give his last name, left, talks about living homeless while waiting in line for food on Foremaster Lane near downtown Las Vegas on Thursday, July 18, 2019. (Chase Stevens/Las Vegas Review-Journal) @csstevensphoto 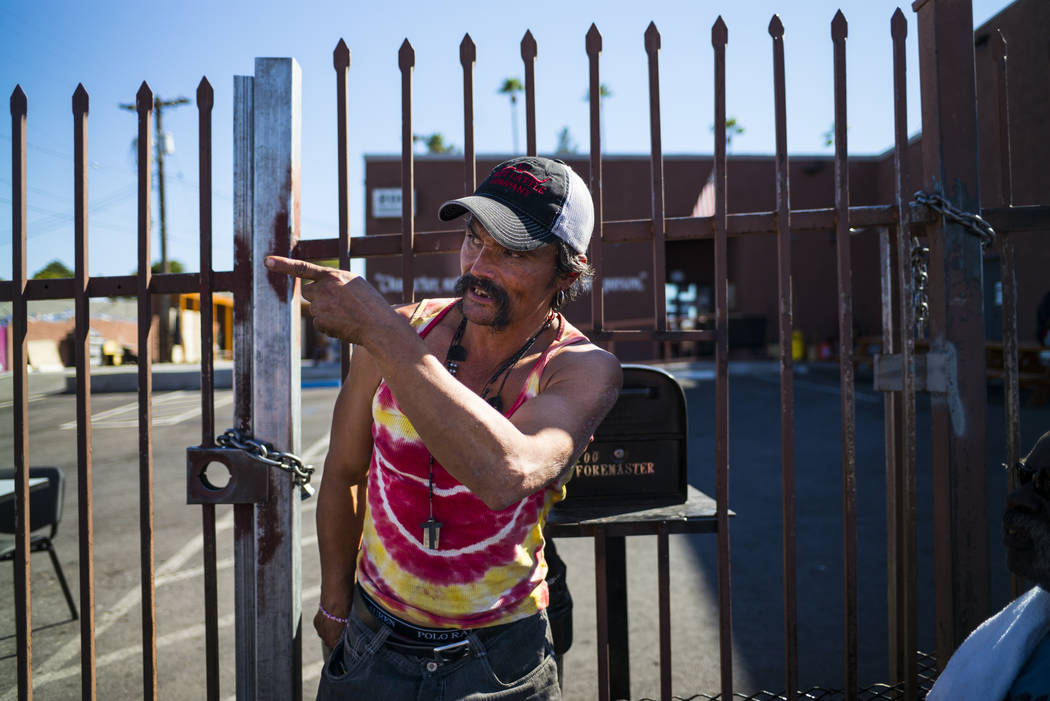 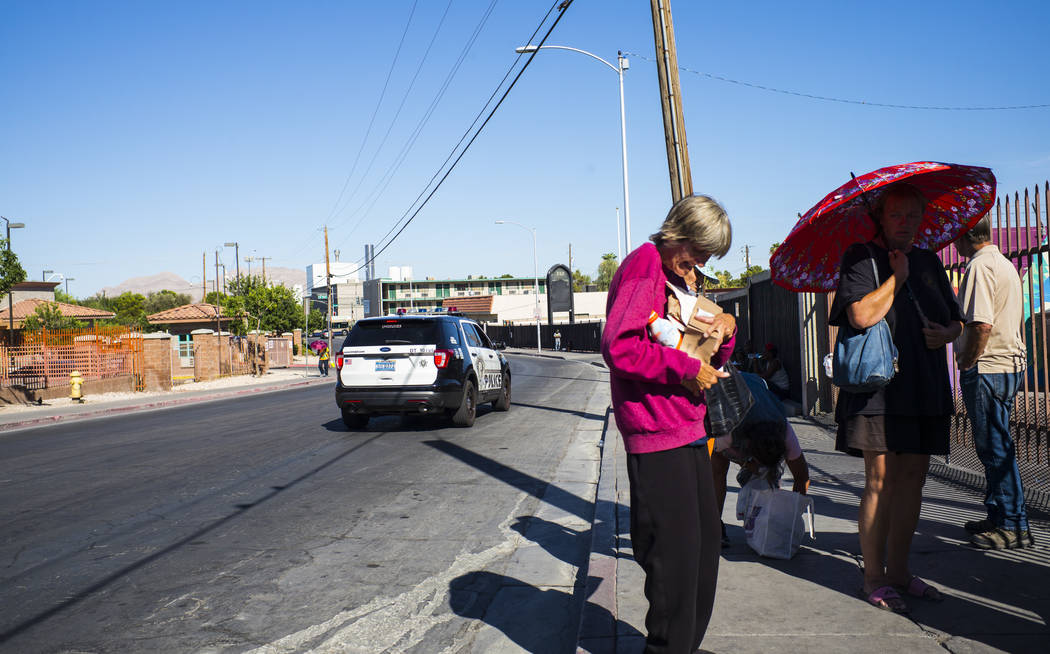 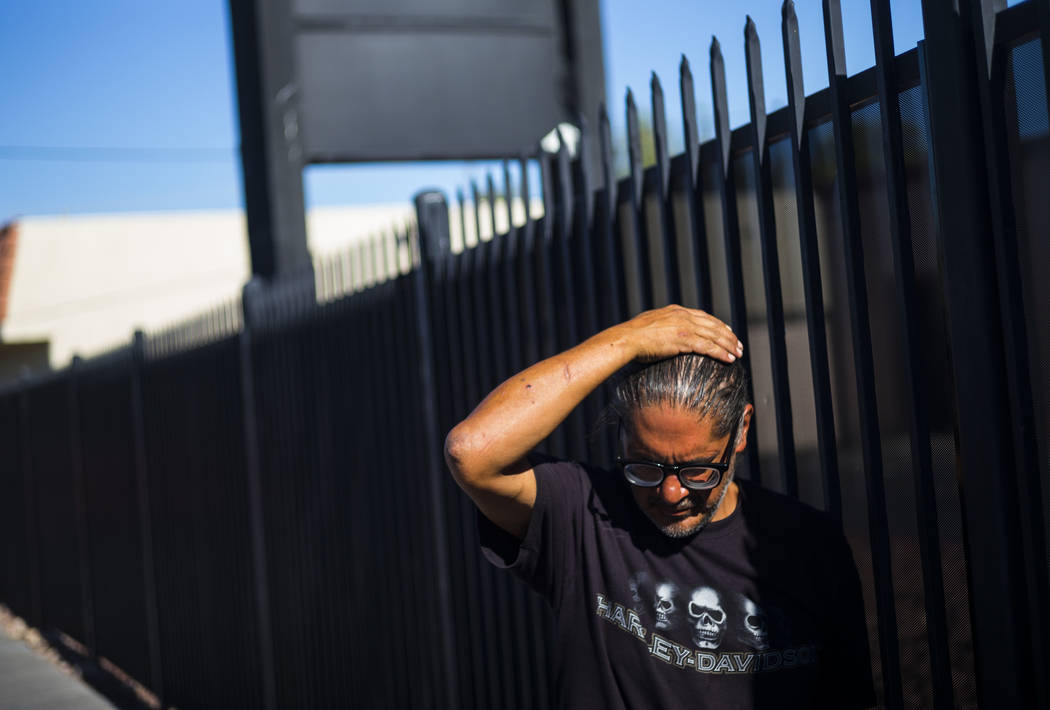 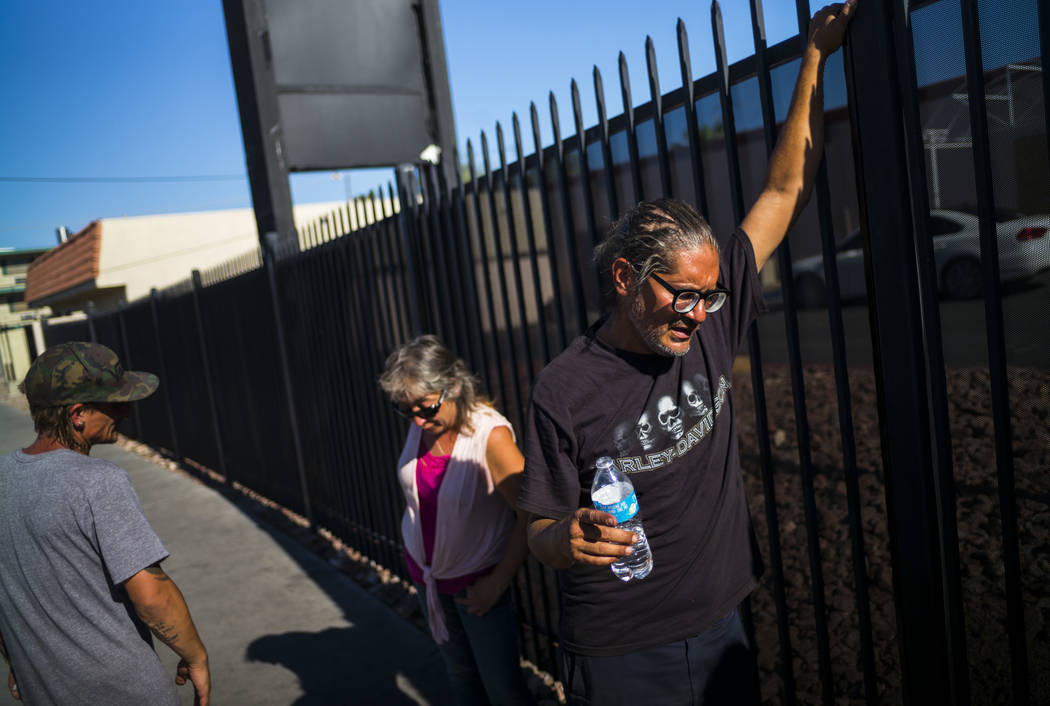 While the annual census of homeless people in Clark County released last week showed a 13 percent decline from the previous year, many of those laboring on the front lines of the battle against homelessness say they see no evidence that the stubborn problem is easing.

The survey, conducted over two days and nights in January, counted 5,286 living in shelters and on the streets — nearly 800 fewer than the total in 2018 and the lowest total since the county began counting the homeless 12 years ago.

Roberts and leaders of other local service providers say they can’t explain the decline but add that it contradicts what they see from the trenches.

“I don’t know where they got these numbers,” said Arnold Stalk, CEO of Veterans Village, which houses homeless veterans and provides food to more than 300 people three days a week through Three Square. “I’m not saying anybody did anything wrong. I hope it is going down. I just don’t see it in our facilities at all.”

At Catholic Charities, for instance, client enrollments “have risen significantly year over year,” Roberts said, and the nonprofit’s 520-bed shelter and free breakfast are overburdened.

Other emergency shelters in the valley say they, too, are operating at or near capacity.

Part of the puzzle

Clark County officials caution that the census is only part of the puzzle.

“It’s just like a picture, and it’s kind of a moment frozen in time,” said Clark County Social Service Manager Michele Fuller-Hallauer, who has been involved in the annual count since 2005.

“But the homeless service system and what’s happening is dynamic. It’s always changing and things are being implemented and programs are closing down. Things are really shifting every day.”

For example, Fuller-Hallauer notes that the county estimates 14,000 people will experience homelessness at some point during the year, which also is down from last year’s estimate of nearly 16,650 people.

This year’s count continued a downward trend, with 797 fewer people tallied than last year. The 2018 census total of 6,083 homeless individuals was itself down about 6.7 percent compared with 2017.

There could be many factors behind the declining numbers, but the number of volunteers wasn’t one of them.

Some 400 volunteers canvassed the streets this year, more than twice as many as last year. They covered the same amount of territory — 708 census tracts — but did it in less time, Fuller-Hallauer said.

Nor was a federal guideline implemented in last year’s count, which estimated that each tent spotted contains 1.21 people, rather than the 3.12 people used in previous years, responsible, since it remained unchanged this year.

Nonetheless, Roberts called the change in the tent formula counterintuitive.

“We very seldom see a person by themselves in a tent, because of the safety factor. Typically, there’s three and four, sometimes more, because it’s safer to be in groups,” he said.

Fuller-Hallauer said the lack of affordable housing and rentals in the county remains a sticking point in efforts to get people off the streets.

Though the county has made transitional housing a priority, setting aside about $12 million in marijuana business licensing fees toward housing programs for families with children in recent months, there’s still a bottleneck, she said.

Getting the numbers down is essentially “a matter of housing more people each month than become homeless each month,” she said.

No decrease expected in federal funds

She said about 1,000 people a month in Clark County exit dependency in the Homeless Management Information System (HMIS), a coordinated system that tracks clients’ use of social services. That generally means they either build up sufficient financial resources to strike out on their own or leave the area.

The county uses the census data and reports from HMIS to secure federal funding from the U.S. Department of Housing and Urban Development. In each of the past two years, Southern Nevada received about $14 million in grants for homeless programs.

Fuller-Hallauer doesn’t anticipate that the funding will decrease because the census produced lower numbers.

“We’re making an impact, and that’s going to put us at a better position to be more competitive for federal grants.”

Kathi Thomas-Gibson, the city of Las Vegas’ director of community services who oversees operations at the 24/7 Courtyard Homeless Resource Center, agreed that HUD funding is unlikely to be reduced as the result of the census. But unlike many other observers, she says the lower count suggests that city and county initiatives are beginning to bear fruit.

“I think the numbers are telling us to stay the course, and not to invest less, but to commit to the strategies that we’ve been implementing,” she said. “They’re beginning to show positive results.”

A random sampling of homeless in the so-called “Corridor of Hope” on the northern reaches of Las Vegas, also revealed skepticism about the latest count.

T.J., a 67-year-old with a scraggly gray beard and unkempt shoulder-length hair who said he has spent a decade living on and off the streets of Las Vegas, shook his head when he heard the numbers went down.

“I can guarantee it’s wrong; they probably missed half,” he said as he waited in his wheelchair in the 100-plus degree heat for a food delivery. “We know a whole lot more than they think they know about the homeless.”

He said there were places they go in order to not be seen, adding that he sees more people living on the streets than he did 10 years ago.

John Bell, 46, jumped into the conversation, saying that a census is a lousy way to count the homelessness.

“We spend hours in line waiting for meals and shelters. Sometimes there’s no time to look for work,” he said. “More people come every day. How can they count us? It’s a good question.”