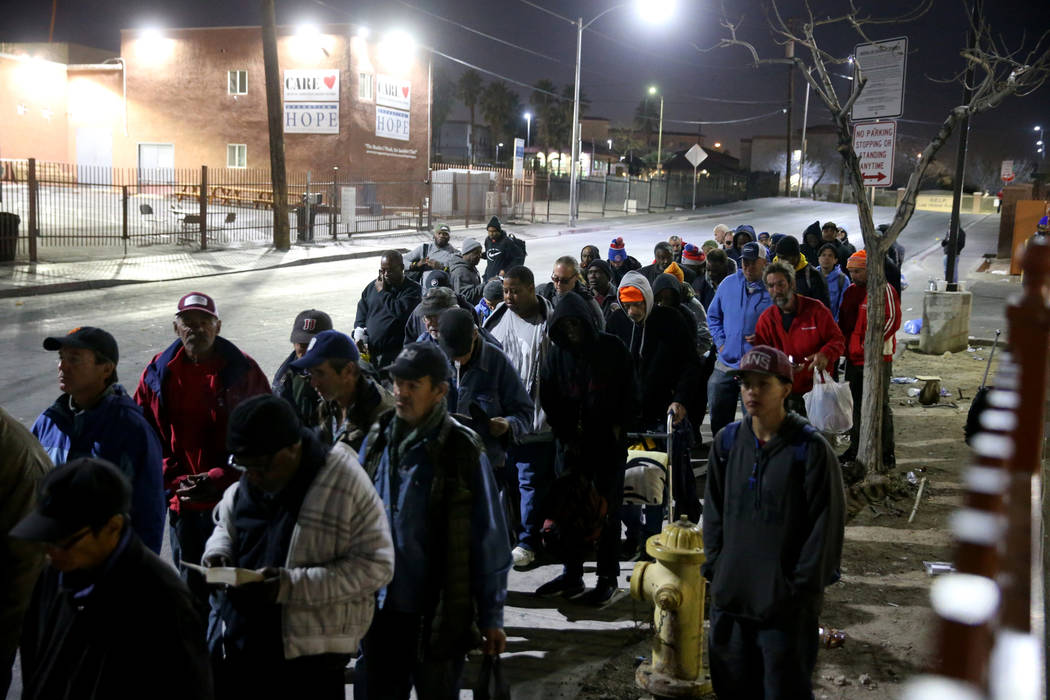 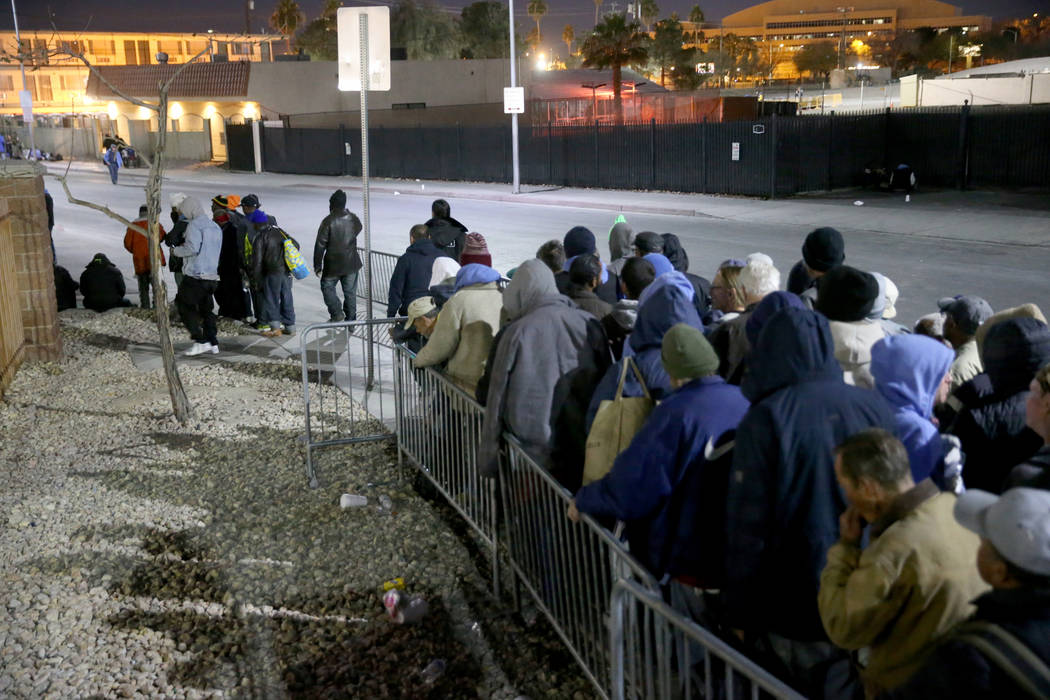 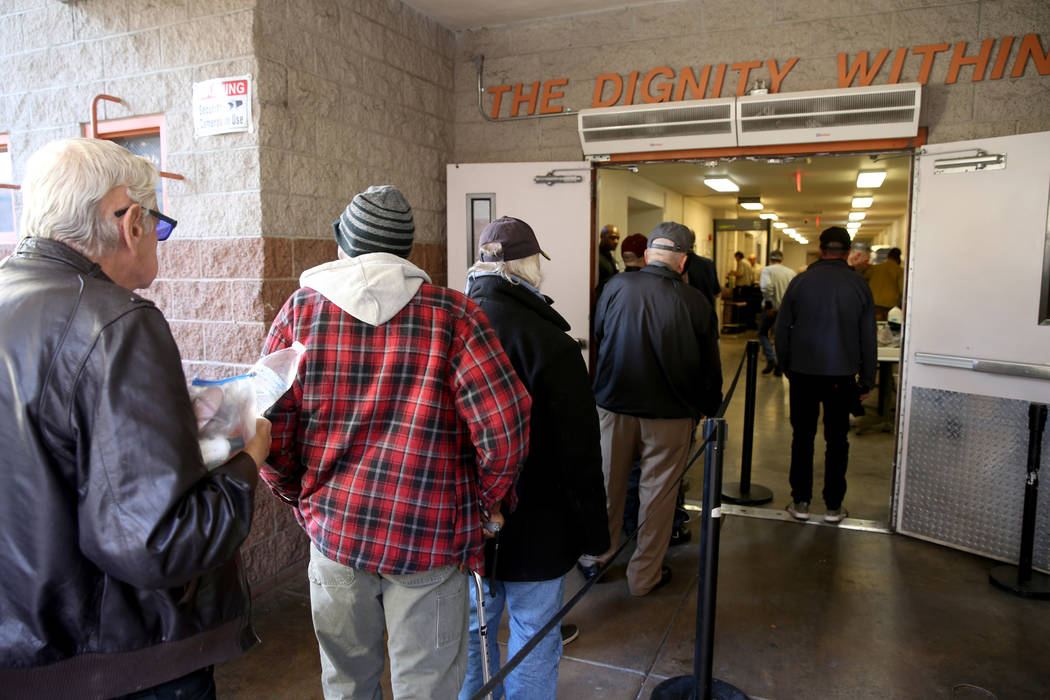 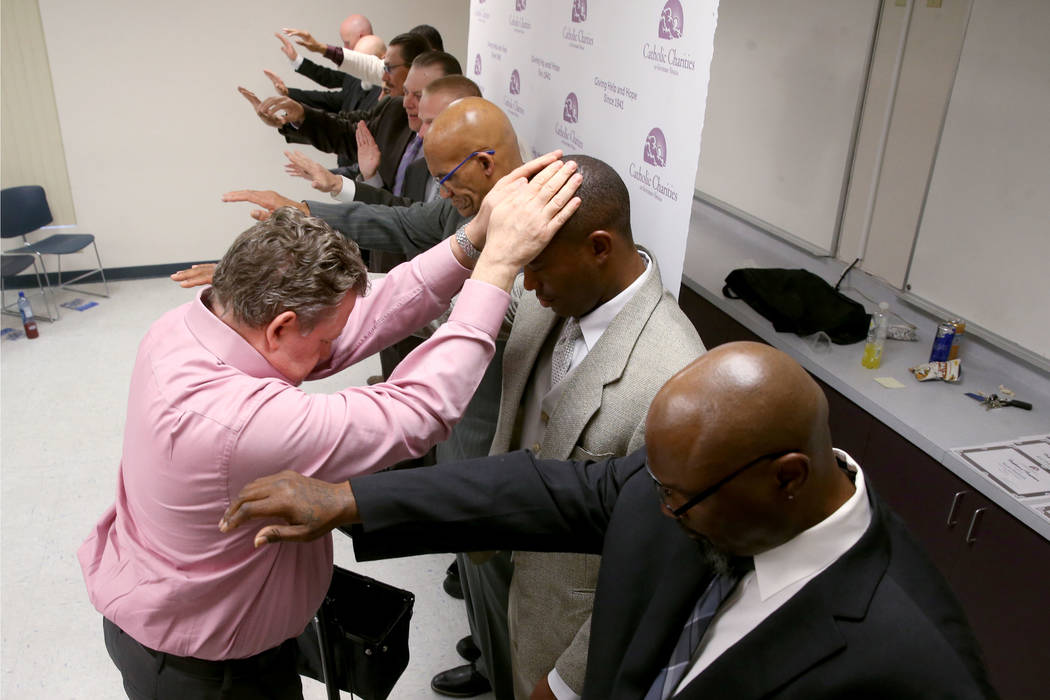 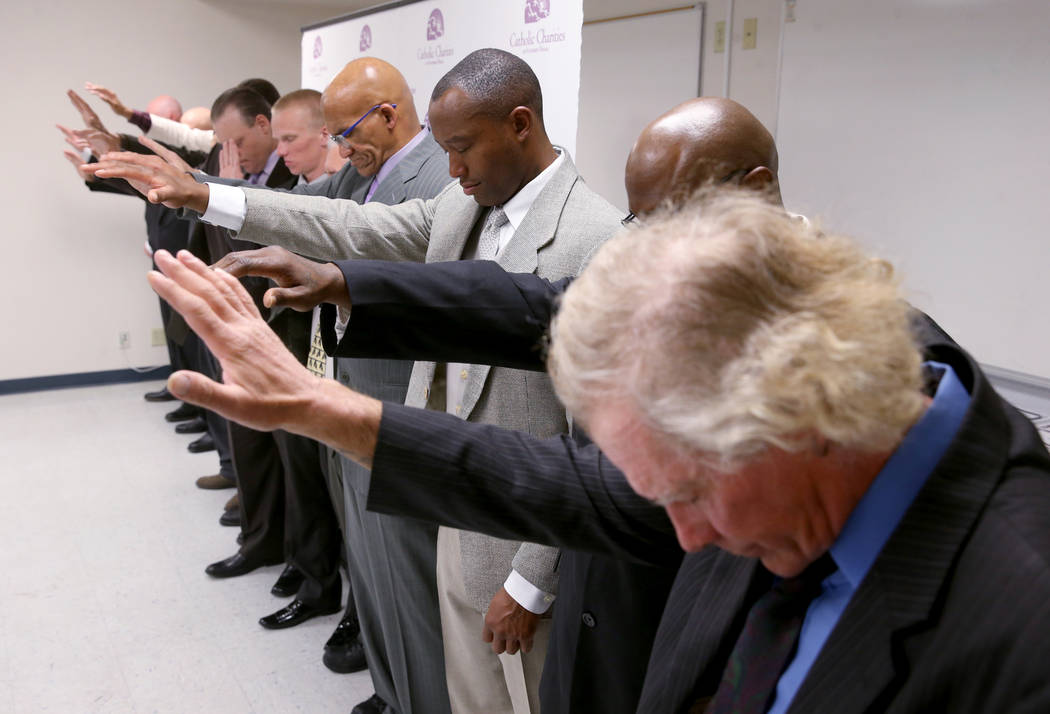 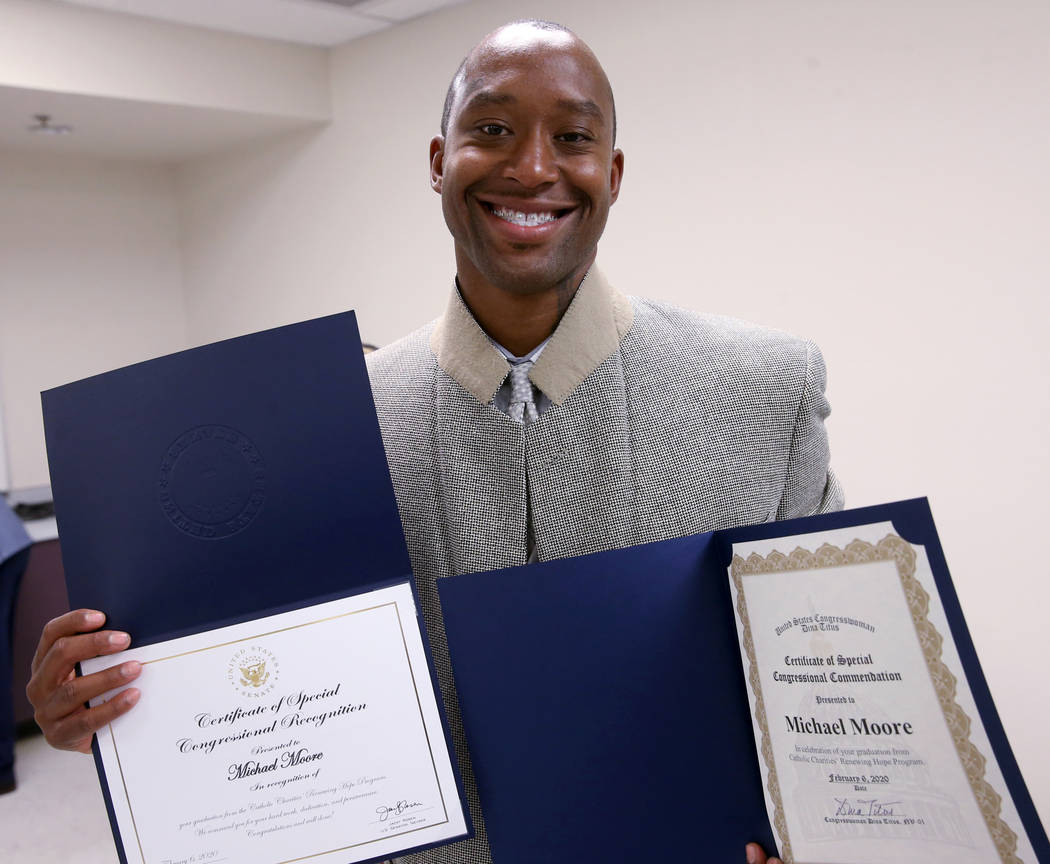 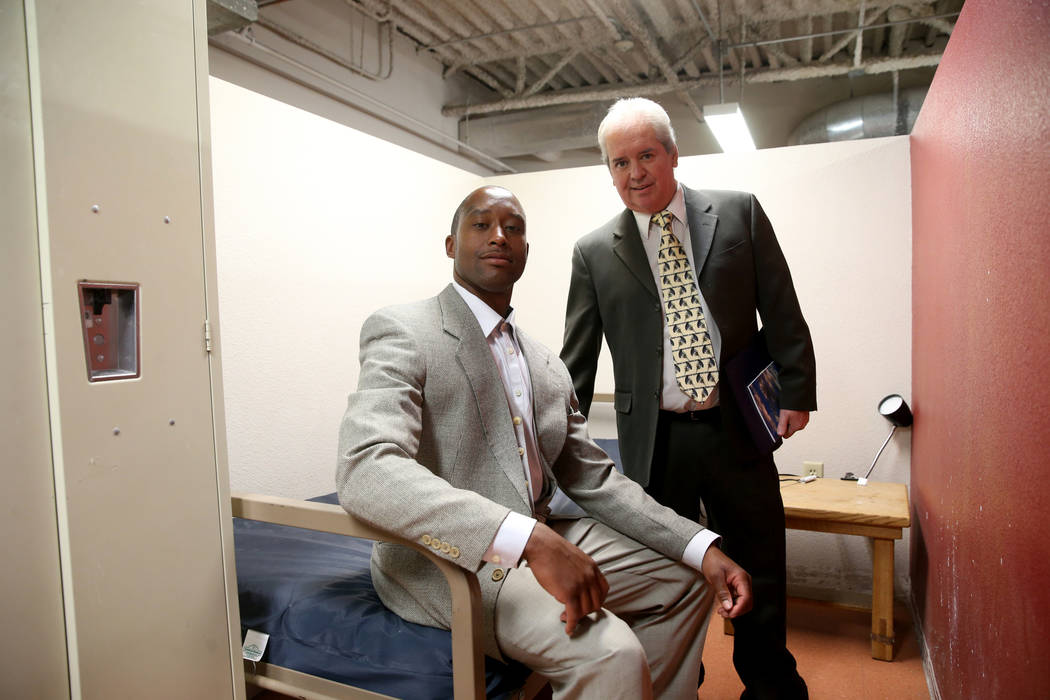 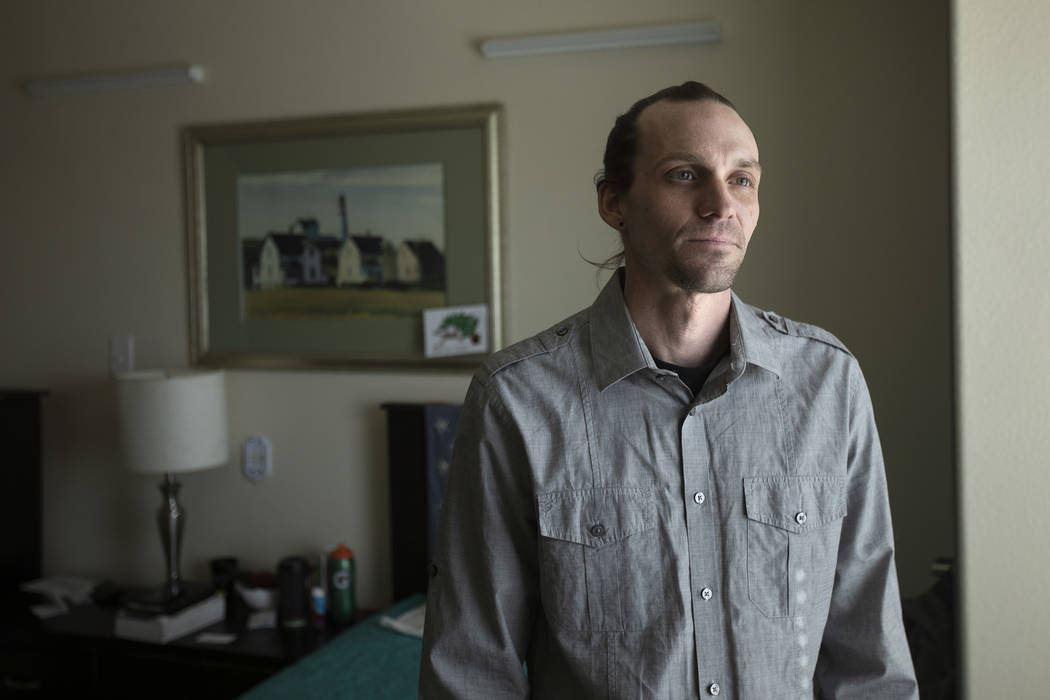 Joseph Riley poses for a portrait in his room at one of Well Care Foundation's facilities on Friday, Feb. 7, 2020, in Las Vegas. Riley became homeless because his health conditions kept him from working, in addition to using methamphetamine. He has been sober since January 2019 and living in Well Care Foundation facilities since November 2019. (Ellen Schmidt/Las Vegas Review-Journal) @ellenkschmidt_ 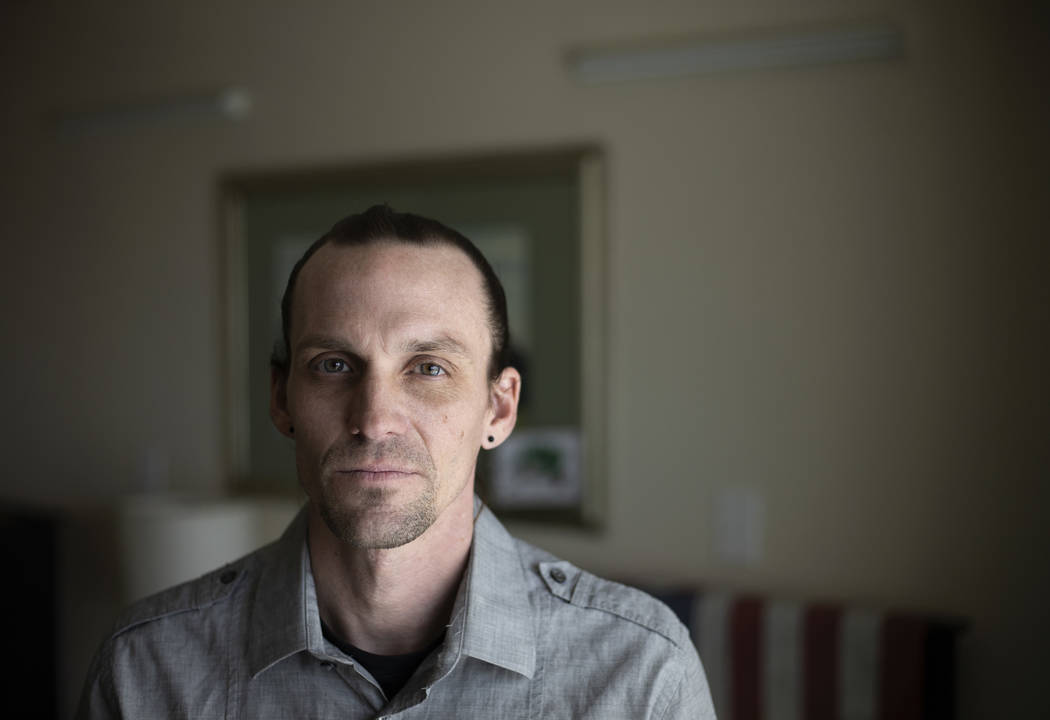 Joseph Riley poses for a portrait in his room at one of Well Care Foundation's facilities on Friday, Feb. 7, 2020, in Las Vegas. Riley became homeless because his health conditions kept him from working, in addition to using methamphetamine. He has been sober since January 2019 and living in Well Care Foundation facilities since November 2019. (Ellen Schmidt/Las Vegas Review-Journal) @ellenkschmidt_

Homeless shelters that accept funding from Clark County to provide emergency beds for the homeless will no longer be able to turn away people who show up drunk or high. Nor can they insist that they undergo treatment as a condition of their admission.

The precise terms of the so-called “low-barrier” rules approved Tuesday by the Clark County Commission will be negotiated in the coming months, but the agenda item made clear that the organizations that sign a contract to supply beds will be required to abide by that guideline.

Most county shelters already have abandoned measures such as sobriety checks as a prerequisite to admission. Removing such barriers is part of an ascendant “housing first” approach to dealing with homelessness.

“Now, we meet you where you’re at, get you off the street and into a unit, and then slowly unbundle those support services,” said Tim Burch, the county’s administrator of human services.

“The process is that people are not going to be coming in just for the night any longer. We’re working on addressing barriers with them from day one.”

The idea is to stabilize homeless individuals by first placing them into housing, then later addressing the root causes of their homelessness, including substance abuse or mental illness, to eventually push them along to self-sufficiency.

Research indicates that the housing first approach pays for itself by cutting the cost of other public services provided to the homeless, such as emergency room visits by the uninsured and entanglements in the jail and court systems.

That’s why the U.S. Department of Housing and Urban Development embraced the strategy more than a decade ago in its regional Continuum of Care programs, including one operating in Southern Nevada.

But from the beginning there has been pushback, with critics saying that providing people with housing without addressing their underlying behavioral issues merely perpetuates the issues that led them to become homeless in the first place.

The White House Council of Economic Advisers stepped into the debate in September, releasing a paper questioning “housing first” and the lack of affordable housing.

“It is not clear that this strategy has been successful in reducing homeless populations,” it said.

Despite such reservations, Clark County is moving ahead with its strategy by lowering barriers at shelters, an interim step that is necessary because of the paucity of affordable housing units: Nevada has the greatest shortage of affordable housing for extremely low-income households, with just 19 units available for every 100 households. In Las Vegas, the shortage is even greater, with 14 units for every 100. The national average is 37.

“We’re only as successful at placing people in housing as there are units that are available,” Burch said. “That’s part of the problem we have; it’s complex.”

Shelters that are already low barrier insist clients will also be monitored for safety and security.

“We have been consistently reducing the barriers in our shelter to ensure that anybody can get in,” Catholic Charities CEO Deacon Tom Roberts said.

“The whole issue with the intoxication is to make sure that the person that comes up isn’t going to be a danger to themselves or someone else.”

At the downtown shelter, there’s a 64-bed dorm called the “P-3 Dorm,” for members of the Renewing Hope program, a nine-month program for clients to reach self sufficiency.

The men in the program volunteer full time at the shelter and create their own goals while receiving case management and substance abuse treatment. After they land a job, they’ll start paying a small sum and learn how to save money in hopes of securing affordable housing.

For the first time since the program’s 2016 inception, all 12 men who started the program graduated Thursday. One participant, Randall Walters, 55, lost his casino job and was struggling with gambling and alcohol addiction when he walked into the shelter on Las Vegas Boulevard North and was immediately accepted into the program.

“The shelter made it possible; if I was still in this program and on the street, I’d probably still be drinking right now,” Walters said.

Dr. Stefan Kertesz, a professor of preventive medicine at the University of Alabama, Birmingham, whose work was cited in the Council of Economic Advisers report, said that there is evidence that housing-first initiatives reduce the number of days that recipients spend homeless.

“But it’s hard to figure out if that reduces the total number of homeless in your community. That’s because it’s a hard question to study,” he said.

The strongest anecdotal evidence was supplied by HUD vouchers passed through the Veterans Administration department, which significantly lowered veteran homelessness, he said.

“Housing first clearly works for getting people housed. What we don’t know very well is if it gets the total number of homeless people down, and that’s because so many other factors influence that very same number.”

One of those factors is affordable housing. Last year, the Clark County Commission earmarked upward of $12 million in marijuana business licensing fees to help combat the housing shortage.

In 2019, 3,121 people who were experiencing homelessness in Southern Nevada moved into housing, county spokesman Dan Kulin said. An additional 789 people who were homeless were enrolled in support programs and also received housing.

But those figures make up a small percentage of the estimated 14,114 people who experienced homelessness in Southern Nevada at some point last year, according to the homeless census.

Addiction specialist Tom Gorham, executive director of Options Recovery Services in Berkeley, California, understands the need to get people off the streets, but says that housing and treatment need to happen simultaneously.

Gorham, who spent 10 years living on the street, said drug court ultimately forced him into the help he needed. And for those with mental health and addiction issues, housing first won’t necessarily translate to better long-term outcomes.

“I look at San Francisco as a good model of what not to do,” he said of the city. “These people are housed, and they’re dying in their rooms. It’s like throwing mud on the wall. Housing first is instant shantytowns.”

Burch counters that the county’s program is not intended as a bandage to just get people off the streets. In December, for example, the county approved a four year, $7.2 million contract contract to provide shelter for up to 25 patients undergoing substance abuse treatment at Crossroads of Southern Nevada’s rehab center on Charleston Boulevard.

“The goal is not to just throw them in an apartment,” he said.

All in one place

One of the new organizations receiving funding from the county is the Well Care Foundation, whose services include case management, housing, transportation, counseling and medical needs.

“We decided to operate a shelter, but this time around provide them all of the wrap-around services that we have under our organization so when people need to be linked to social services we can do that immediately,” CEO Marce Casal said. “I don’t think shelters have been able to bridge that need before. It was always a cot and three hots.”

At Well Care’s 88-unit downtown building at 100 S. 14th Street on Friday morning, 36-year-old Joseph Riley was getting ready for his April departure into self sufficiency.

“When the government tries to tackle homeless problems, it’s always the chicken or the egg issue. Housing first, or what,” he said. “But you need an address to find work, someplace to put your valuables, a stable location to build everything else up.”

Riley got housing with Well Care in November as he recovered from his meth addiction and dealt with complications from Crohn’s disease. He got a union job and is about to be certified to work forklifts.

“It does come down to the person; you can throw any amount of money and resources to someone on the street, but they have to make the conscious decision to work for it,” he said.

“Going into this, I knew it would be my fresh start.”