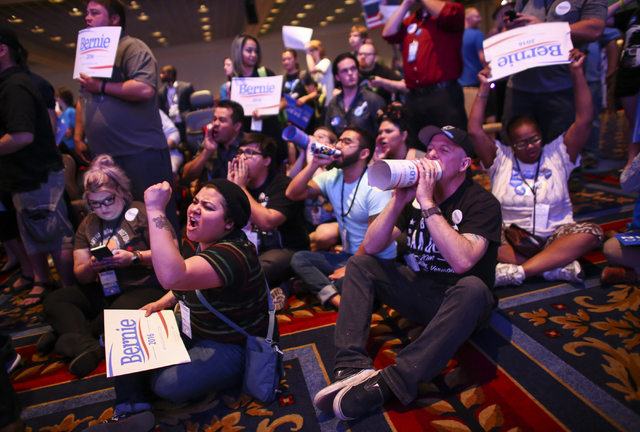 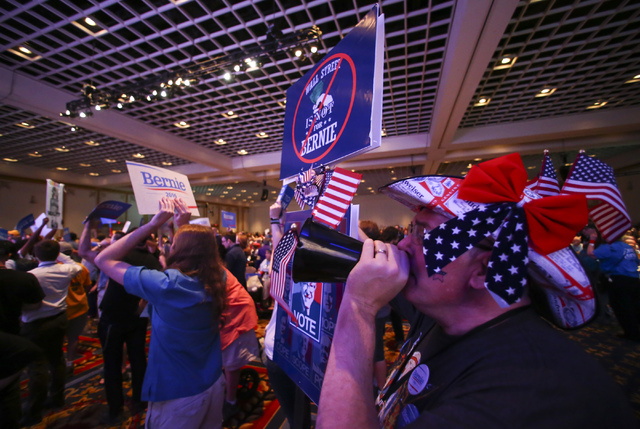 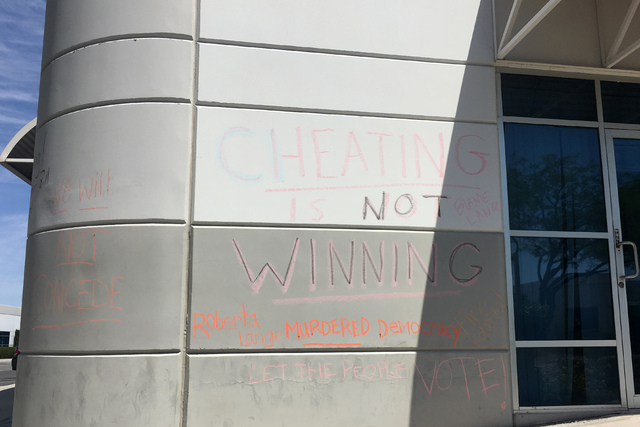 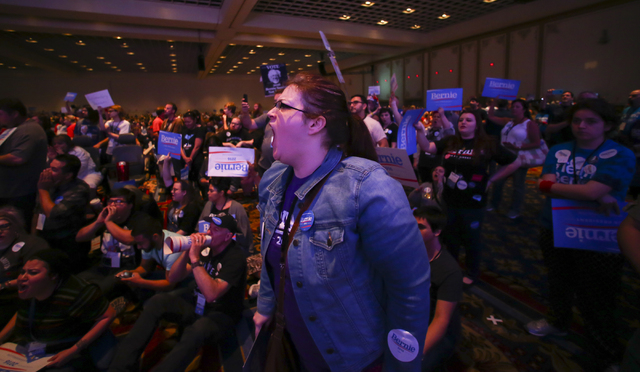 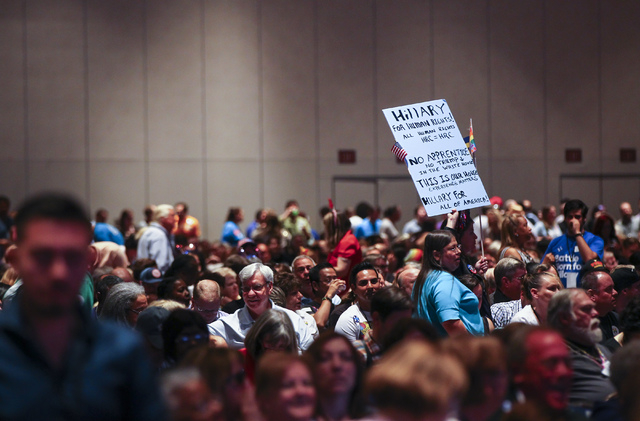 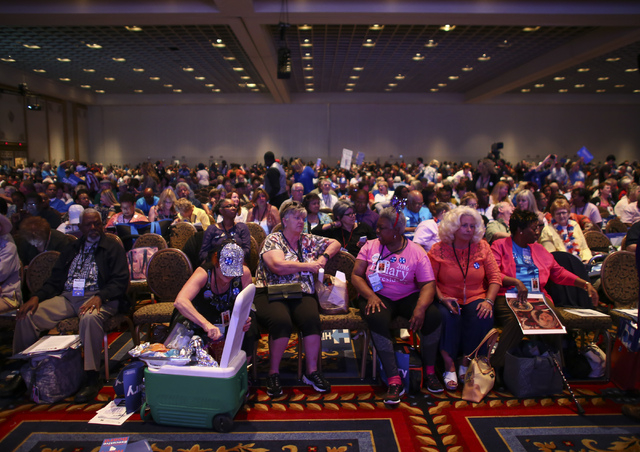 Supporters of Democratic presidential candidate Hillary Clinton talk with one another during the Nevada State Democratic Partyճ 2016 State Convention at the Paris hotel-casino in Las Vegas on Saturday, May 14, 2016. Chase Stevens/Las Vegas Review-Journal Follow @csstevensphoto 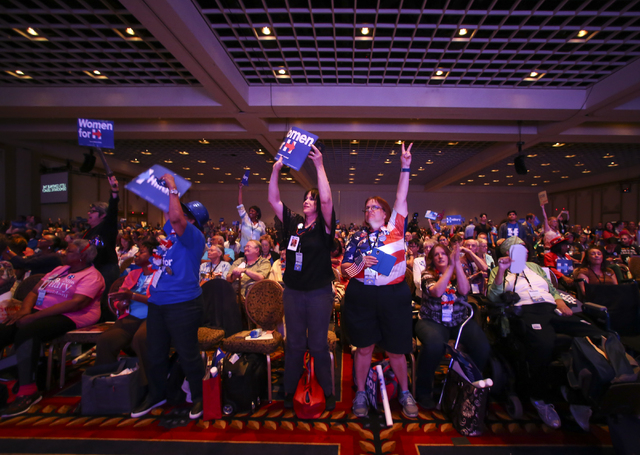 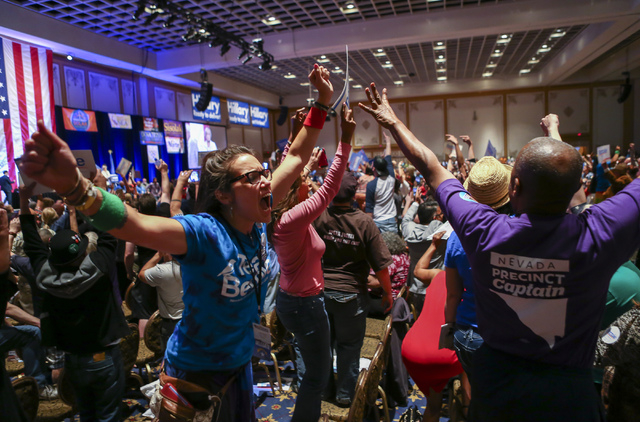 The Nevada State Democratic Party’s headquarters in Las Vegas were closed Monday amid security concerns following a tumultuous state convention over the weekend.

The move came after supporters of presidential candidate Bernie Sanders protested there Sunday, defacing walls and sidewalk with chalk to voice their displeasure with the party’s handling of the convention the day before.

The convention is over, but the wider battle for order continues within the Nevada State Democratic Party. It’s playing out not in the shuttered headquarters, but on social media, where some Sanders backers relentlessly criticize and insult state party Chairwoman Roberta Lange. The outcry turned ugly over the weekend, when Lange’s cellphone number was posted online and she received death threats.

A Metropolitan Police Department spokesman confirmed Monday that the agency is investigating the threats. He declined to comment further, as the investigation continues.

Scores of voicemails and texts left on Lange’s cellphone and provided to the Las Vegas Review-Journal show that some came from out-of-state people.

“I’m a Democrat from Ohio,” one texted her. “What you did yesterday was despicable. Please resign and turn yourself over to authorities.”

Another texted: “Are you scared of us? Of Bernie? Are you that big of a coward?” Yet another texted: “You’re a piece of trash. You are embarrassing to this country. You make Americans look bad and make women look worse. Hillary isnt going to win!”

Meanwhile, the state party on Monday posted a statement online defending the outcome.

The convention became unruly as Sanders supporters clashed with party leadership, including Lange, in disputes over procedural matters and the seating of delegates. Earlier in the convention, they had booed U.S. Sen. Barbara Boxer, D-Calif., a Hillary Clinton supporter who spoke at the event. The tumult was such that Lange needed a security detail.

At the state convention, the party picked delegates for Sanders and Clinton to attend the Democratic national convention in Philadelphia in July. In the February caucuses, Clinton had edged out Sanders, an independent senator from Vermont. However, Sanders supporters packed the county conventions in April, and Clinton’s delegate lead over Sanders temporarily dropped from 20-15 to 18-17.

The state party says the delegate math simply worked in Clinton’s favor because her campaign organized and got almost all of its delegates to the state convention. Clinton’s campaign had filled 98 percent of its 1,722 delegate slots at the convention with 1,695 people. Sanders’ campaign filled 78 percent of its 2,124 available slots with 1,662 people, the party said.

“In plain terms, the Clinton campaign organized and got nearly all of their delegates to the State Convention,” the party said. “The Sanders campaign did not.”

Clinton regained her 20-15 delegate lead at the state convention as a result. In all, the state party will send 43 delegates. That figure includes eight superdelegates, elected officials and party leaders who are free to support who they wish.

Party officials offer strong rebuttals to complaints. For example, Sanders supporters complained that 64 of their people weren’t allowed to be seated at the state convention. But the party says those people didn’t meet requirements such as registering to vote by May 1, or hadn’t responded to prior requests to fix unidentifiable or missing information. Six of those people in question were seated as delegates, the party said.

It’s unclear how long the state party’s headquarters will be closed. That is under evaluation, according to the party.

The party blamed the Sanders campaign for “deliberately sharing misinformation about how the convention operates to get people riled up.”

“And after starting this fire, they had no capacity — and no desire — to control their own supporters from hurling threats and insults and being disruptive to the proceedings,” the party said.

In an interview, Sanders campaign spokesman Michael Briggs declined to comment on that allegation, saying: “We’re still in the process of putting together our own information on what happened.”

Briggs stressed that Sanders had publicly encouraged everyone to have a good convention in a statement before the event. Both Sanders and U.S. Senate Minority Leader Harry Reid, D-Nev., had issued separate statements calling for all to work together respectfully and constructively.

Briggs added that “civility is not a one-way street.”

“All I can say is that the Democratic Party, whether in Nevada or nationally, would be making a big mistake if the party establishment cannot figure out a way to embrace the millions of working-class voters and young voters who Bernie Sanders has brought back into the political process this year,” he said, adding it’s smart to make those people “part of winning elections no matter who turns out to be the Democratic nominee.”

On Friday, a group of Sanders supporters were in a Clark County courtroom, where they lost a lawsuit filed against the State Democratic Party. The dismissed lawsuit had alleged that the state party improperly changed the deadlines to apply for party leadership positions. In that case, the state party has said a Sanders supporter improperly circulated a draft with an inaccurate date.