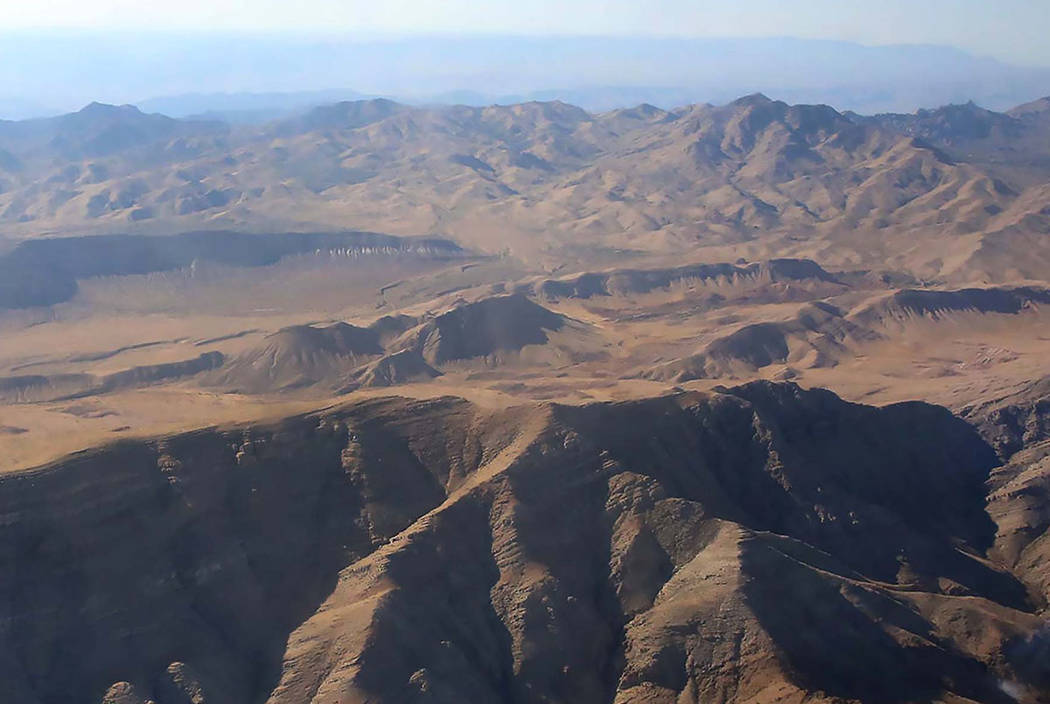 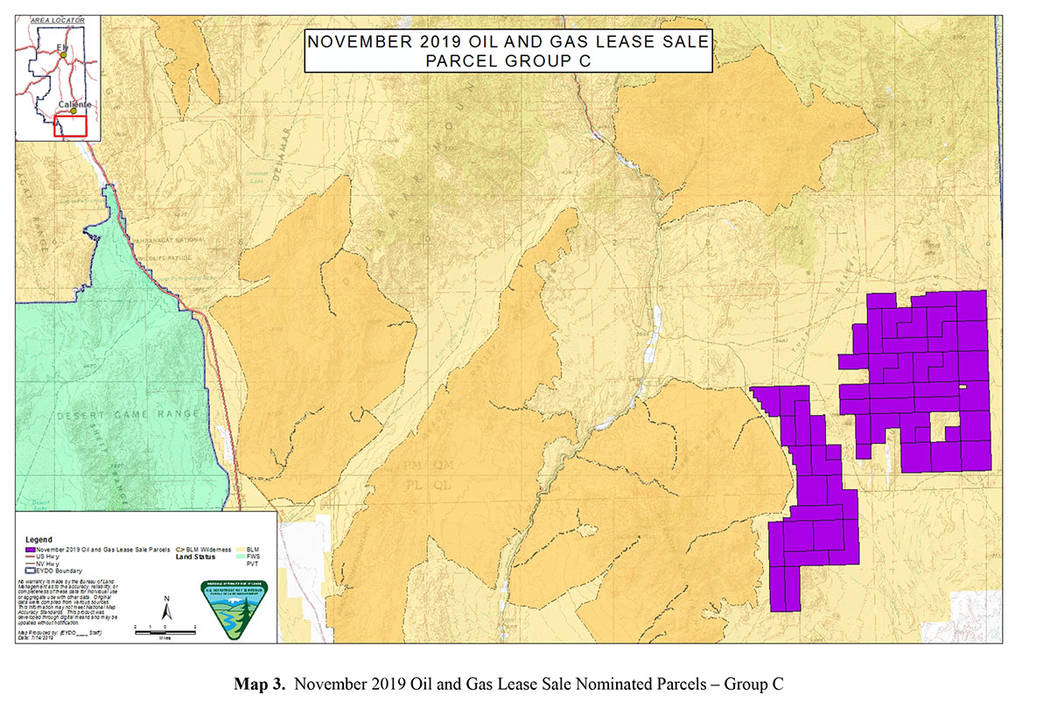 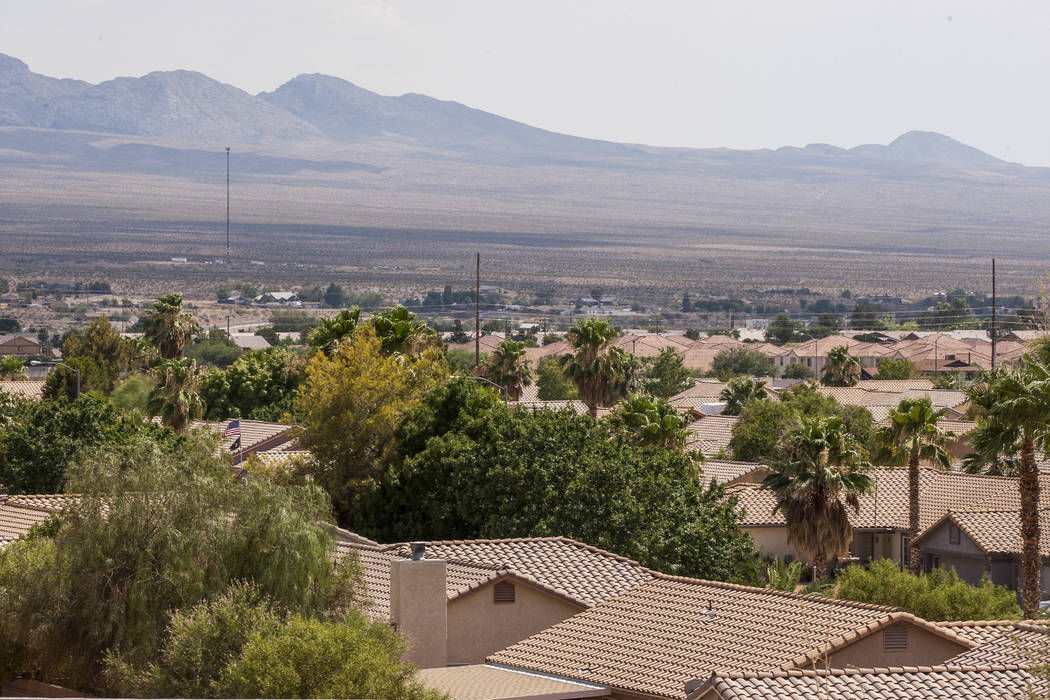 The possibility that federal land in three counties may soon be available to lease for oil and gas drilling has alarmed public officials in Mesquite and the Las Vegas Valley.

More than 550,000 acres in White Pine, Lincoln and Nye counties could be auctioned off this month by the Bureau of Land Management as required by the Mineral Leasing Act, according to federal documents.

Yet local officials have pushed back against the plan, warning that fracking poses undue risk to the city of Mesquite’s water supply.

About 100,000 of the proposed acres are in the Tule Desert, east of the Mormon Mountains and, opponents say, within a basin that serves as the main source of drinking water for more than 23,000 people in Mesquite and neighboring Bunkerville, about 70 miles northeast of Las Vegas.

“I just think it’s not in our best interest to go down that road,” said Clark County Commission Chairwoman Marilyn Kirkpatrick, who represents the district.

Kirkpatrick has urged the BLM to consider excluding those parcels in its competitive sale of oil and gas leases beginning Nov. 12, writing in a letter to the agency that allowing oil and gas exploration could threaten drinking water for the Mesquite community and the million tourists who visit it annually.

“While the benefits versus risks of modern oil and gas extraction practices are still being debated in the public sphere,” she wrote, “I believe that any potential for impact to drinking water sources is simply unacceptable.”

Henderson Mayor Debra March also voiced concern on behalf of her city, writing to the BLM that “potentially disastrous economic and social consequences” stemming from failure to protect water would “far outweigh the minor economic gain” to a “very small number of people.”

Their letters follow a Mesquite City Council decision in August to unanimously pass a resolution opposing oil and gas leases in the region. The resolution warned of “documented cases of water contamination near oil and gas sites, including people lighting their drinking water on fire.”

The Boulder City Council will vote on whether to adopt a similar resolution Nov. 12, according to spokeswoman Lisa LaPlante. Policymakers in Las Vegas and North Las Vegas have not taken any formal stance on the issue, spokesmen for those cities said.

“When you’re setting up to do fracking, you’re destroying the land that it sits on, obviously,” Mesquite Mayor Al Litman said in an interview.

The Western Energy Alliance, a nonprofit trade association representing more than 300 companies involved in oil and gas exploration in western states, says the industry is economically strong and safer than opponents suggest.

The sector is responsible in the western U.S. for more than 169,000 jobs and $36 billion in economic benefits annually while protecting public health, natural resources and wildlife, according to the association.

Meanwhile, the BLM says its process is thorough. The agency performs complete environmental analyses on parcels nominated for auction by companies, agencies or individuals before opening up proposals to public comment. The bureau is responsible for accommodating multiple uses for land it manages, weighing the desires of disparate groups often at odds, such as drillers and environmentalists.

“We do take the process seriously. It’s not just that we’re willy nilly offering parcels,” said Kemba Anderson, the agency’s branch chief for fluid minerals. “We have to look at all sides.”

The BLM will decide Nov. 8 whether any objections were sufficient to remove certain parcels from the Nov. 12 auction block, according to Anderson.

Leases are applicable for a 10-year period, but permits to drill are not automatically doled out in the auction. Instead there must be an additional, site-specific environmental analysis performed before any lease-holders may begin to explore, drill or produce oil and gas, federal documents show.

Oil and gas lease sales must be conducted at least four times per year, rotating between district offices in Nevada. They can be a money maker for the operator and federal government but they also can fund state budgets including public education and infrastructure, according to the BLM.

The industry on public lands in Nevada contributed $3.1 million in total economic output for fiscal year 2018, the BLM said.

Between now and March, the agency plans to lease a total of 1.7 million acres through oil and gas lease sales, to the chagrin of environmental organizations.

The Sierra Club and similar groups which wrote to the BLM opposing the upcoming auction – worried about impacts to wildlife and outdoor tourism among other issues – claimed that the agency failed to consider enough alternatives to the most recent proposal, the cumulative impacts of leasing and how the process facilitated noncompetitive speculative leasing, federal documents show.

“With climate change literally killing people here in Southern Nevada, anything we can do to keep (fossil fuels) in the ground is going to benefit us long term,” said Christian Gerlach, an organizing representative with the Sierra Club.

Gerlach also said that because water basins in southern Nevada were interconnected, drilling near Mesquite’s water supply should be a concern for Las Vegas Valley residents.

It is a point also made by Litman, the Mesquite mayor.

“I’m hoping they cancel the sale,” he said. “Secondary to that, at least for the time being, (I hope) that nobody leases it.”

He acknowledged Mesquite was “caught in a tough situation” and that resolution was uncertain.

“It’s the federal government. Who knows?” he said. “If you don’t push your concerns and something occurs, the next question is why didn’t you say something?”