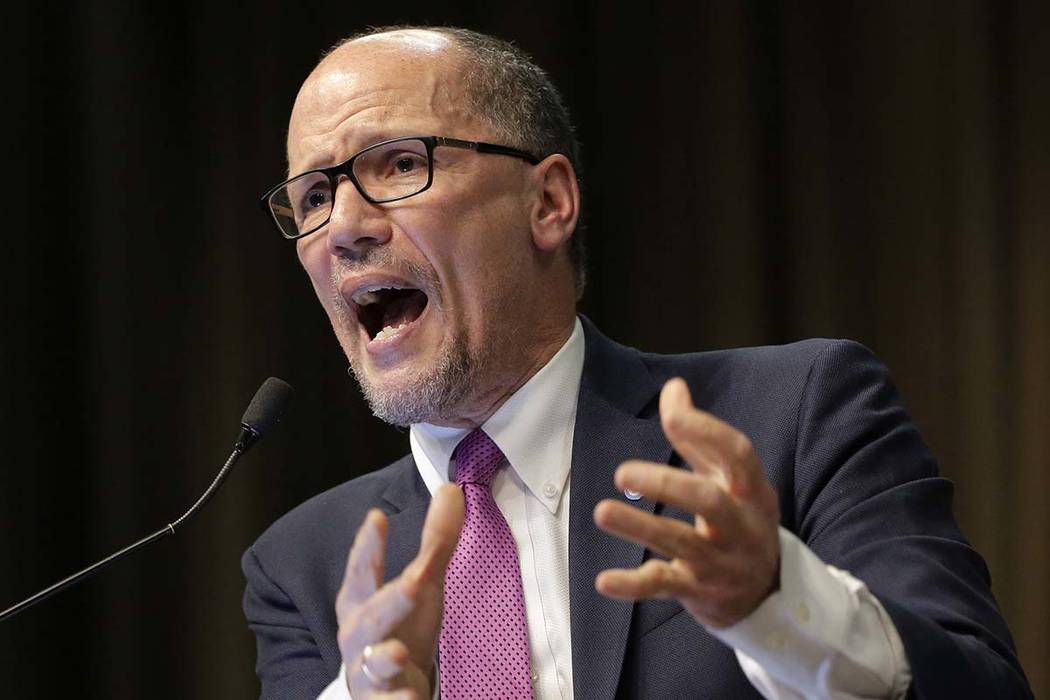 Tom Perez, chairman of the Democratic National Committee, is seen in an April 3, 2019. The DNC has dropped the Las Vegas Review-Journal poll from its list of polls used to winnow which presidential candidates qualify for its third and fourth presidential debates. (AP Photo/Seth Wenig)

WASHINGTON — The Democratic National Committee dropped the Las Vegas Review-Journal poll from its list of polls used to winnow which presidential candidates qualify for its third and fourth presidential debates.

The DNC did not respond to multiple queries from the Review-Journal as to the reasons behind the decision.

But tucked into its announcement of its new criteria, Democrats noted, “The DNC and its media partners reserve the right to add a Nevada-specific poll sponsor to this list in the near future.”

When Nevadans went to the ballot box, Clinton ended up with 47.9 percent of the vote — which delivered all six electoral college votes — and Trump garnered 45.5 percent.

The DNC released new criteria for the third and fourth debates, which will be held in September and October. It is not clear if the third debate will span one evening, Sept. 12, or be extended to accommodate other candidates on Sept. 13.

Democratic hopefuls will have to have at least 2 percent support in four polls — which could be national or from Iowa, New Hampshire, Nevada and/or South Carolina among a long list of polls — to qualify for these debates, the location of which has not been disclosed.

In addition, qualifying candidates will have to have received donations from 130,000 unique donors.

Geoffrey Skelley, elections analyst for FiveThirtyEight, tweeted that it was curious that the DNC removed Reuters and the Review-Journal: “Former isn’t shocking because its polls with Ipsos have sparked many sample questions. Latter is weird because it hasn’t released a single NV poll.”