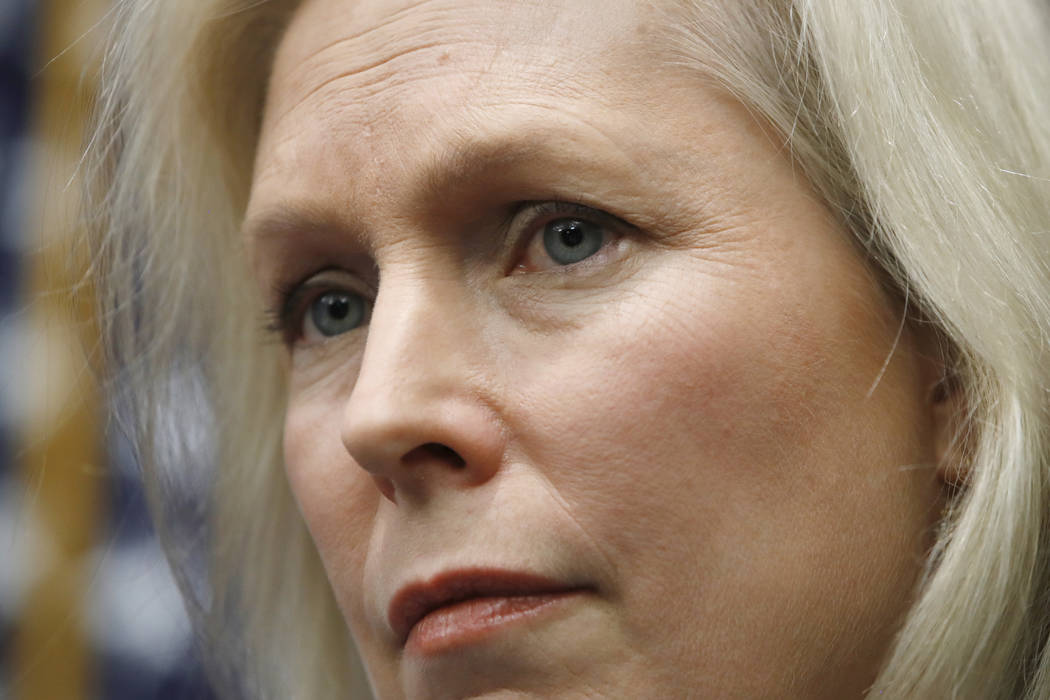 Sen. Kirsten Gillibrand, D-N.Y., listens during a news conference on sexual harassment, Wednesday, Dec. 6, 2017, on Capitol Hill in Washington. Sen. Al Franken's support among his fellow Democrats is cratering as a host of female Democratic senators Wednesday called upon him to resign. (AP Photo/Jacquelyn Martin) 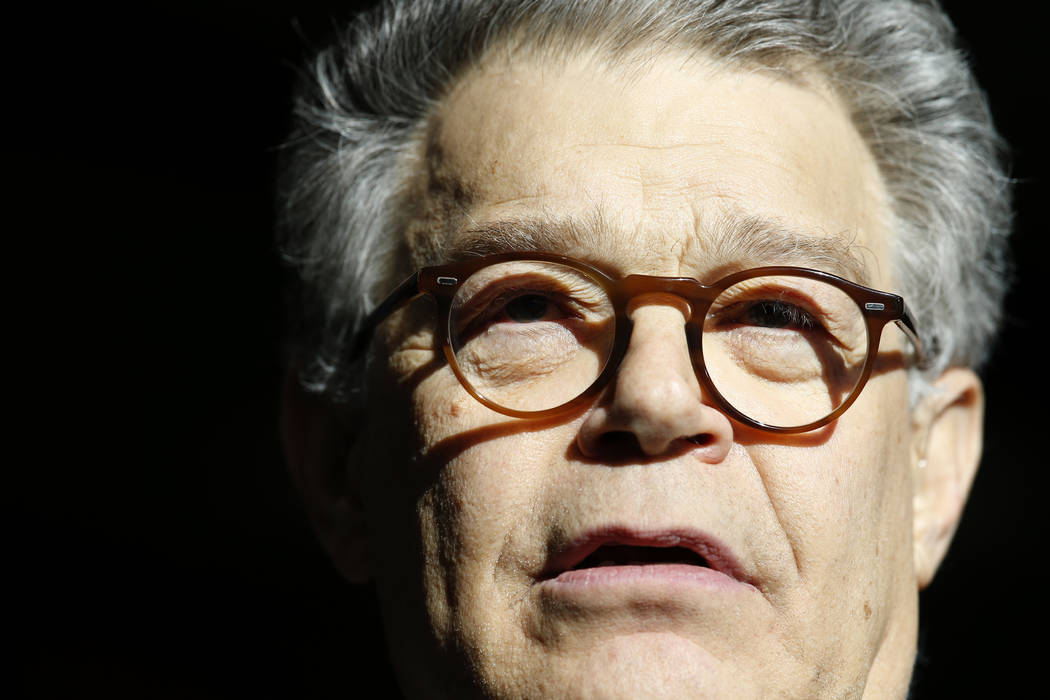 In this Nov. 27, 2017 photo, Sen. Al Franken, D-Minn., speaks to the media on Capitol Hill in Washington. Franken is denying an accusation by a former Democratic congressional aide that he tried to forcibly kiss her after a taping of his radio show in 2006. (AP Photo/Alex Brandon) 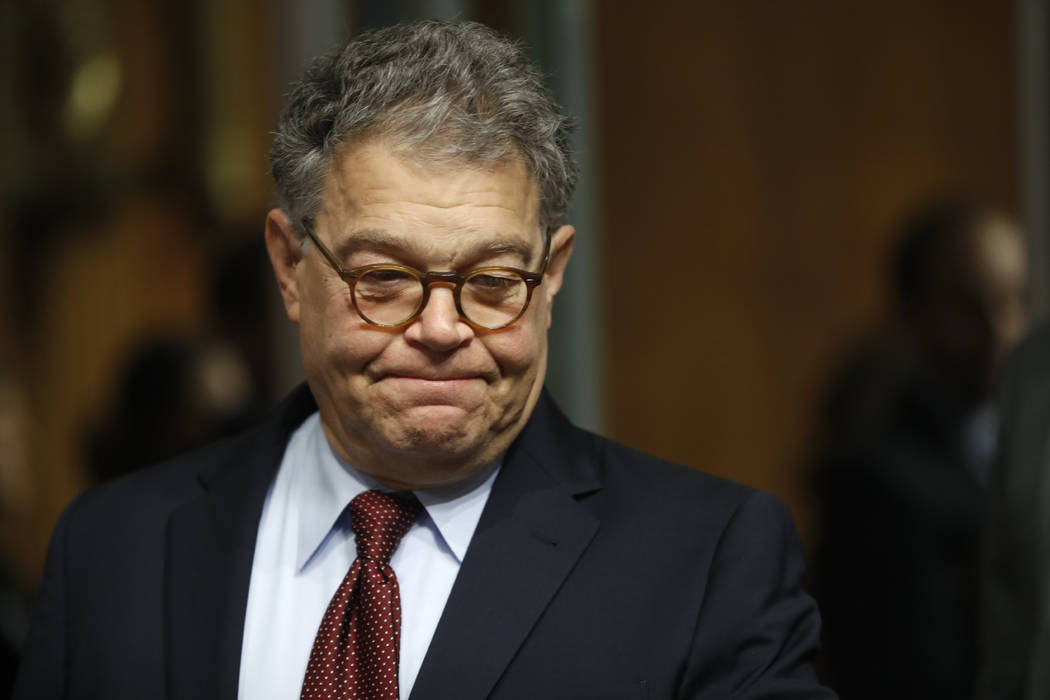 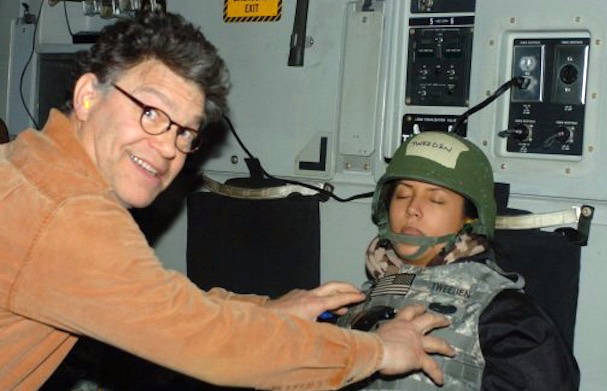 Minnesota Sen. Al Franken appears to place his hands on model and radio host Leeann Tweeden's breasts in this photo released by Tweeden. Tweeden posted the photo on the website of KABC, where she works as a news anchor for a morning radio show. (Leeann Tweeden) 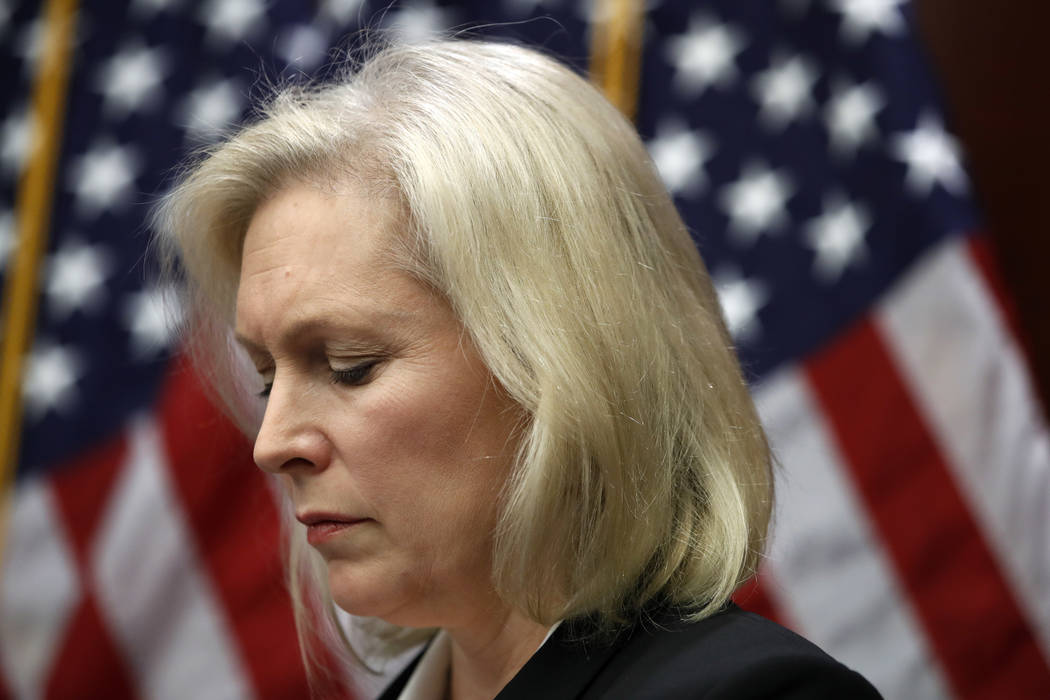 Sen. Kirsten Gillibrand, D-N.Y., listens during a news conference on sexual harassment, Wednesday, Dec. 6, 2017, on Capitol Hill in Washington. Sen. Al Franken's support among his fellow Democrats is cratering as a host of female Democratic senators Wednesday called upon him to resign. (AP Photo/Jacquelyn Martin)

WASHINGTON — Sen. Al Franken’s support among his fellow Democrats appeared to collapse Wednesday as a group of female Democratic senators called upon him to resign amid sexual misconduct allegations. His office said he would make an announcement Thursday, but did not specify the subject.

“I’m shocked and appalled by Sen. Franken’s behavior,” Murray said. “It’s clear to me that this has been a deeply harmful, persistent problem and a clear pattern over a long period of time. It’s time for him to step aside.”

Gillibrand said “it would be better for our country if he sent a clear message that any kind of mistreatment of women in our society isn’t acceptable by stepping aside to let someone else serve.”

With Franken’s position appearing untenable, his office issued a statement saying, “Senator Franken will be making an announcement tomorrow. More details to come.”

The demands came in rapid succession after Franken on Wednesday vehemently denied a new sexual misconduct accusation that came from a former Democratic congressional aide, who said he tried to forcibly kiss her after a taping of his radio show in 2006.

The Minnesota Democrat said in a statement that the allegation, reported by Politico, was “categorically not true.”

The woman, who was not identified, said Franken pursued her after her boss had left and she was collecting her belongings. She said she ducked to avoid his lips, and that Franken told her: “It’s my right as an entertainer.”

Franken, in his statement, said the idea he would claim such conduct as a right as an entertainer was “preposterous.”

But the tide quickly turned against Franken Wednesday morning. Fellow Democrats had previously been cautious and respected Franken’s right to cooperate with an ethics probe. But the steady stream of allegations has female Democrats fed up.

The pressure built on Franken a day after former Rep. John Conyers, D-Mich., resigned after numerous allegations of sexual misconduct.

And in Alabama, women have accused Roy Moore, the GOP nominee in a special election for the Senate, of sexual misconduct with them when they were teens, including one who said Moore molested her when she was 14. Nonetheless, President Donald Trump — who survived explosive allegations himself of sexual assault during last year’s campaign — has endorsed Moore and the Republican National Committee is spending money on his behalf.

There are a total of 16 Democratic women in the Senate. Among the others that have not yet commented are Franken’s fellow Minnesotan, Amy Klobuchar, whose office said she had spoken to him Wednesday morning.

Capitol Hill has long had a culture that has erred on the side of protecting lawmakers. Franken, who is generally liked and respected by his colleagues, was initially afforded deference as he battled the initial allegations against him. But as the allegations mounted, a Democratic aide said, women in the Senate — whom faced increasing pressure from the public and the media for protecting Franken — grew increasingly frustrated.

Franken already faced a Senate Ethics Committee investigation into previous claims by several other women that he groped them or sought to forcibly kiss them.

“This allegation is categorically not true and the idea that I would claim this as my right as an entertainer is preposterous,” Franken said. “I look forward to fully cooperating with the ongoing ethics committee investigation.”

The allegations against Franken began in mid-November when Los Angeles radio anchor Leeann Tweeden accused him of forcibly kissing her during a 2006 USO tour.

Several other allegations have followed, including a woman who says that Franken put his hand on her buttocks during a picture pose at the Minnesota State Fair in 2010. Two women, who asked to remain anonymous, have told the Huffington Post that Franken squeezed their buttocks at political events during his first campaign for the Senate in 2008. A fourth woman, an Army veteran, alleged Franken cupped her breast during a photo op on a USO tour in 2003.

Franken has apologized for his behavior but he has disputed some of the allegations.