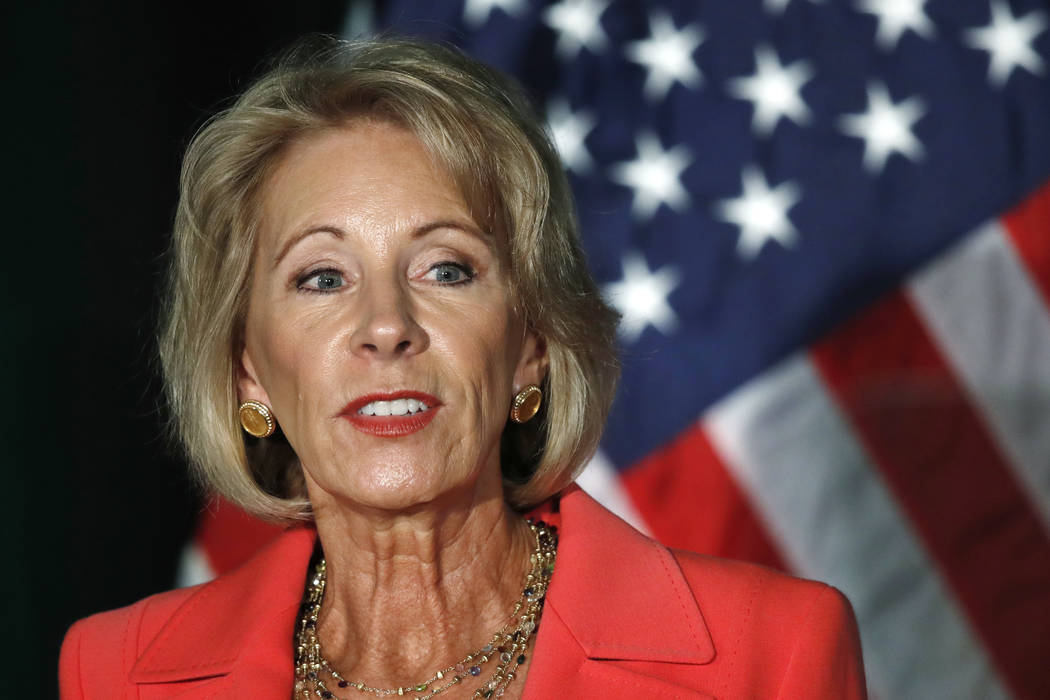 WASHINGTON — Education Secretary Betsy DeVos talked to lots of people — victims, students who said they were falsely accused and the family members of both — before she started to reform a policy instituted under President Barack Obama that instructs college campuses on how to deal with allegations of sexual assault.

That last sentence is key as DeVos has taken upon herself the difficult task of righting a pendulum that has swung too far.

In the not so distant past, university administrators often failed to protect female students or establish a culture that discouraged aggressive predatory behavior. In such an atmosphere, victims of sexual assault had good reason to fear reporting crimes committed against them lest they be subjected to an onslaught of questions that looked for fault in their behavior, instead of that of their attackers.

With the rise of feminism, the paradigm shifted. Authorities generally stopped looking for excuses to explain away violent or abusive acts. In the criminal justice system, the word was out — don’t blame the victim.

And then, as happens, the movement to stand up for victims morphed into something different. In 2011, the Office of Civil Rights for the Education Department sent a “Dear Colleague” letter to colleges with new guidelines for handling sexual assault cases. The letter threatened to withhold funds from institutions that did not adhere to the new policy, which requires schools to investigate all complaints of sexual assault and details how they must conduct disciplinary proceedings.

Desperate not to appear insensitive to victims of sexual assault, academia went overboard. The burden shifted from the accuser to the accused. The horror stories made news. Male students charged with assault were presumed guilty. Tribunals had the ability to expel students who were denied due process.

The case of Kwado Bonsu

In The Atlantic, Emily Yoffe wrote about a University of Massachusetts, Amherst junior who was accused of sexual assault in 2014. His accuser wrote that the two students had gotten high together, then engaged in foreplay. She decided to leave. Later she wrote, “as my RA (resident adviser) training kicked in, I realized I’d been sexually assaulted.”

“I want to fully own my participation in what happened, but at the same time recognize that I felt violated and that I owe it to myself and others to hold him accountable for something I felt in my bones wasn’t right,” she wrote.

Police investigated the case and never charged Kwado Bonsu. But the university restricted Bonsu’s movement on campus, while investigating him. Yoffe wrote that the university found Bonsu was not responsible for sexual misconduct, but suspended him for not adhering to its restrictions. Bonsu sued and his case was settled confidentially.

“Definitions of sexual wrongdoing on college campuses are now seriously over-broad,” four Harvard law professors wrote in an August paper, “Fairness to All Students under Title IX,” that challenged the Obama policy. “They go way beyond accepted legal definitions of rape, sexual assault, and sexual harassment. They often include sexual conduct that is merely unwelcome, even if it does not create a hostile environment, even if the person accused had no way of knowing it was unwanted, and even if the accuser’s sense that it was unwelcome arose after the encounter. The definitions often include mere speech about sexual matters.”

The Harvard law professors noted, “The procedures for enforcing these definitions are frequently so unfair as to be truly shocking. Some colleges and universities fail even to give students the complaint against them, or notice of the factual basis of charges, the evidence gathered, or the identities of witnesses.”

That makes it harder to push the notion that if you are truly outraged about rape, you are willing to go overboard.

That’s the tack former Vice President Joe Biden took when he wrote on Facebook, “Sexual assault is the ultimate abuse of power, and its pernicious presence in our schools is unacceptable. Policies that do not treat this epidemic with the utmost seriousness are an insult to the lives it has damaged and the survivors who have worked so hard to make positive change.”

Biden urged like-minded individuals to “speak up. Any rollback of Title IX protections will hurt your classmates, your students, your friends, your sisters. Make your views known.”

There are many reasons DeVos could have decided to let the current policy continue.

Her boss, President Donald Trump, after all, boasted to “Access Hollywood” in 2005 that he had license to grab women’s crotches. “And when you’re a star, they let you do it. You can do anything,” he said in an unfortunate moment that resurrected a culture too close for comfort to the subject at hand.

Nonetheless, the White House released a statement that applauded DeVos’ decision “to overhaul the Department of Education’s approach to campus sexual assault enforcement under Title IX. These efforts will produce better policy — one that ensures that sexual assault is taken seriously on campuses without denying the accused the fundamental protections of due process.”

DeVos didn’t detail how the rules will change but she said her office will seek feedback from the public and universities to develop new rules, a decision the White House also applauded.

“So much momentum has built up for federally driven changes in campus discipline and rules, so much momentum for unreasonableness,” Olson said, but the unfairness was so striking that it brought together feminists, Libertarians and Trump supporters.

Still, he added, “It took a great deal of courage for her to do this. It would have been easy for her to find some way to dodge it, or postpone it.”