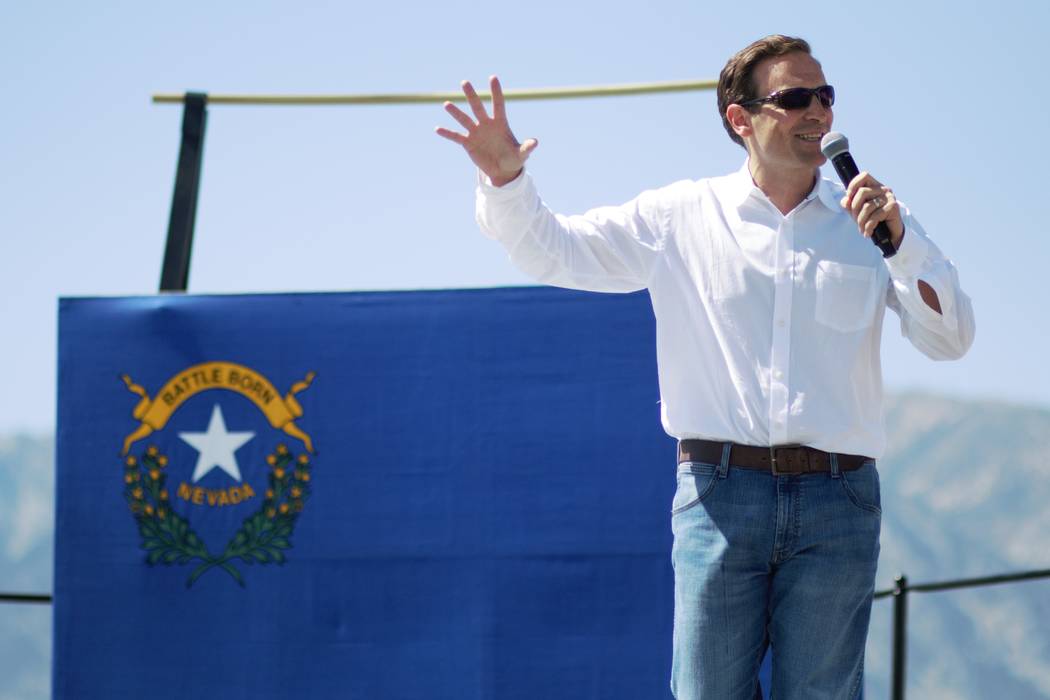 GARDNERVILLE — President Donald Trump took center stage at the annual Basque Fry in rural Nevada on Saturday, despite being nowhere near the Silver State.

Several of Trump’s current and former aides trekked to the Corley Ranch, just south of Gardnerville in the heart of Nevada GOP country, for the fifth annual iteration of the Republican event where they predicted dire straits should Trump not win re-election next year.

“The future of our country is on the ballot,” former acting U.S. Attorney General Matthew Whitaker told the crowd of more than 1,000 conservatives who showed up.

Former Nevada Attorney General Adam Laxalt, who along with his PAC hosts the annual event, encouraged those who showed up to get engaged and call their friends and family members and tell them to vote for Trump next year.

“Tell them why our country will disappear as we know it if we lose the presidency,” Laxalt said.

Trump’s acting Chief of Staff Mick Mulvaney said that Nevada is a major key in Trump’s path to re-election, despite losing the state on his way to the presidency in 2016. And it comes down to simple arithmetic.

“We lost this state by 28,000 votes; 70,000 people voted for somebody other than Donald Trump or Hillary Clinton,” Mulvaney said. “There are enough voters in this state today for us to win this state in 2020.”

Mulvaney added that Nevadans “are going to see the president on the stump more and more.”

The Basque Fry, hosted annually by Laxalt since 2015, is based on the events his late grandfather, former Nevada Gov. and U.S. Sen. Paul Laxalt, threw in Washington D.C. that were known for serving Basque-style “lamb fries,” or fried lamb testicles.

Laxalt noted that last year’s fry almost hit a snag. Three days before, they realized that the freezer housing the lamb anatomy had gone out.

“No, we didn’t serve you bad balls last year,” Laxalt joked, noting that they had to scramble and order more testicles from Missouri and have them shipped overnight to save the “fries” for the Basque Fry.

Unlike the last year’s fry, which harped on the GOP fears that Democrats running for state and congressional offices were going to turn Nevada into “East California,” the 2019 group of speakers instead focused heavily on the presidential race while offering their bleak predictions for what would happen if Trump were not re-elected and the Republican political boogeyman: socialism.

“How much time do we have here before the socialists take over?” Matt Schlapp, chairman of American Conservative Union, asked the crowd. “We cannot believe that we are talking about electing a socialist,” Schlapp added later while talking about Democratic candidates such as Vermont Sen. Bernie Sanders, the self-described democratic socialist.

For Laxalt, this year’s fry represented a significant shift. It was the first he hosted it as neither an elected official or candidate actively running for office — and he told reporters before the event started that he is not running for office in 2020.

Instead, Laxalt said, he and his PAC would focus on helping Trump win Nevada, a state which the president lost in 2016 and which saw Democrats in 2018 win five of six of the state constitutional offices and come one seat short of an outright supermajority in the state Legislature.

Asked why he thought 2020 would be different for Republicans, including Trump, given recent history, Laxalt said having the president at the top of the ticket will be a big help.

“I think the bottom line is that with Trump on the ballot, it makes a difference,” Laxalt said.