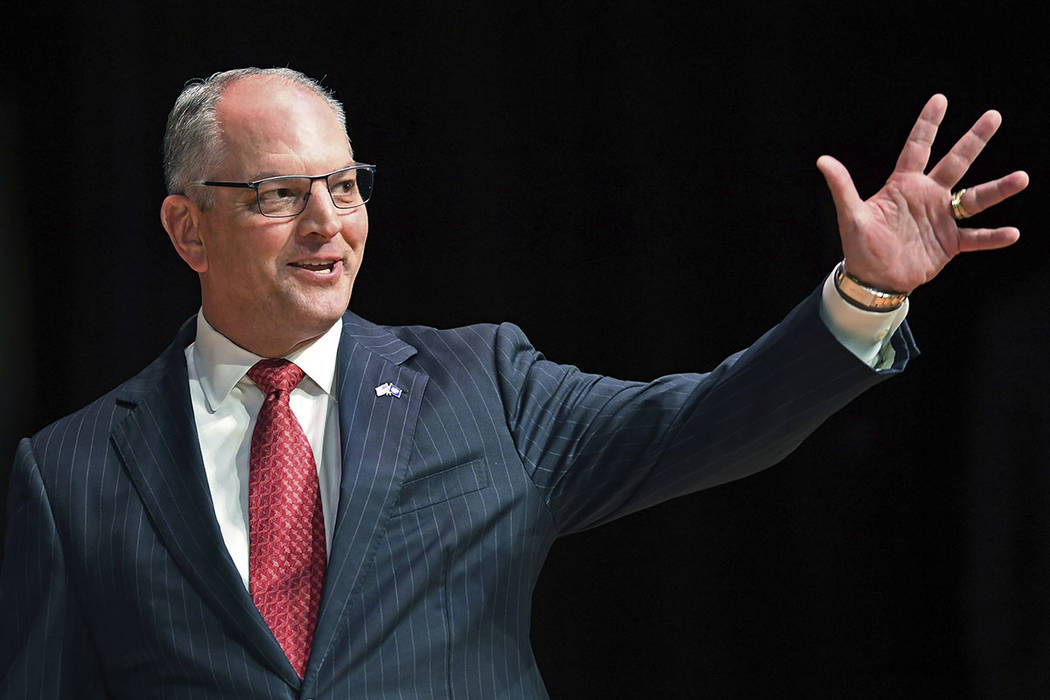 FILE - In this Sept. 19, 2019, file photo, Gov. John Bel Edwards acknowledges his supporters as he comes out onstage for a debate with Eddie Rispone and Republican Rep. Ralph Abraham in Baton Rouge, La. Edwards is battling to hold onto the Democrats’ only governorship in the Deep South. (Bill Feig/The Advocate via AP, Pool, File) 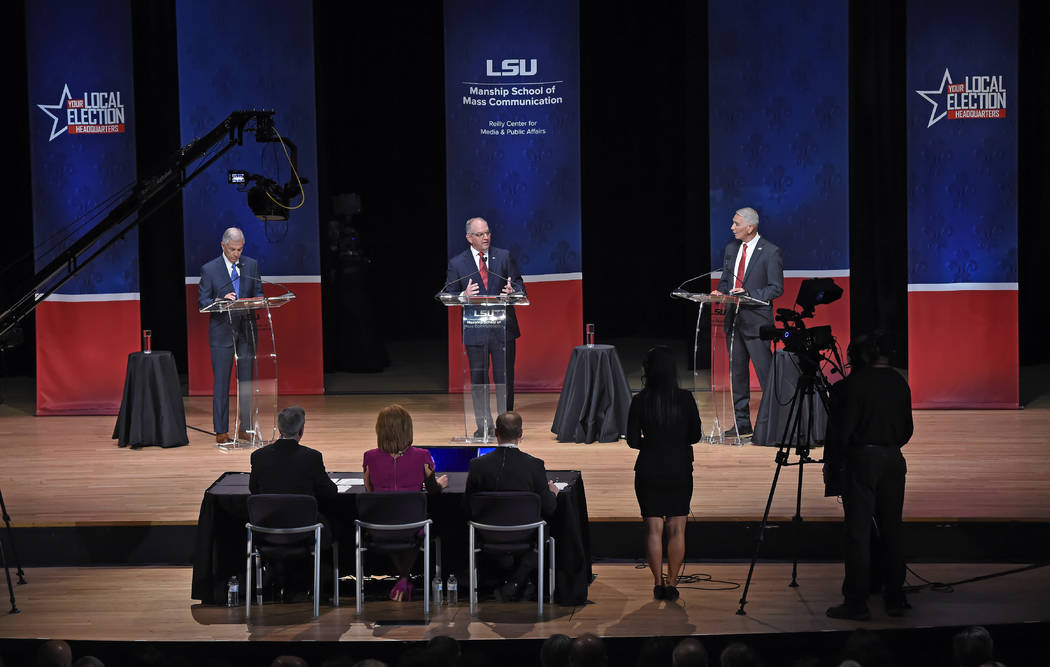 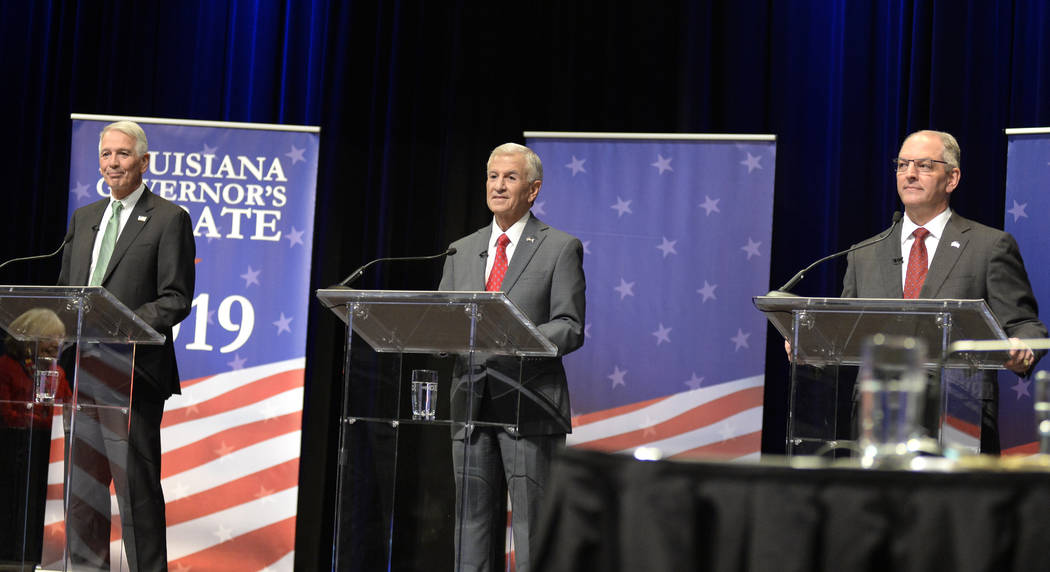 Gubernatorial candidates, from left, U.S. Rep. Ralph Abraham, Eddie Rispone, and Gov. John Bel Edwards, face each other in the second debate, hosted by Louisiana Public Broadcasting, on Thursday, Sept. 26, 2019, at Angelle Hall on the campus of the University of Louisiana at Lafayette in Lafayette, La. (Brad Bowie /The Daily Advertiser via AP) 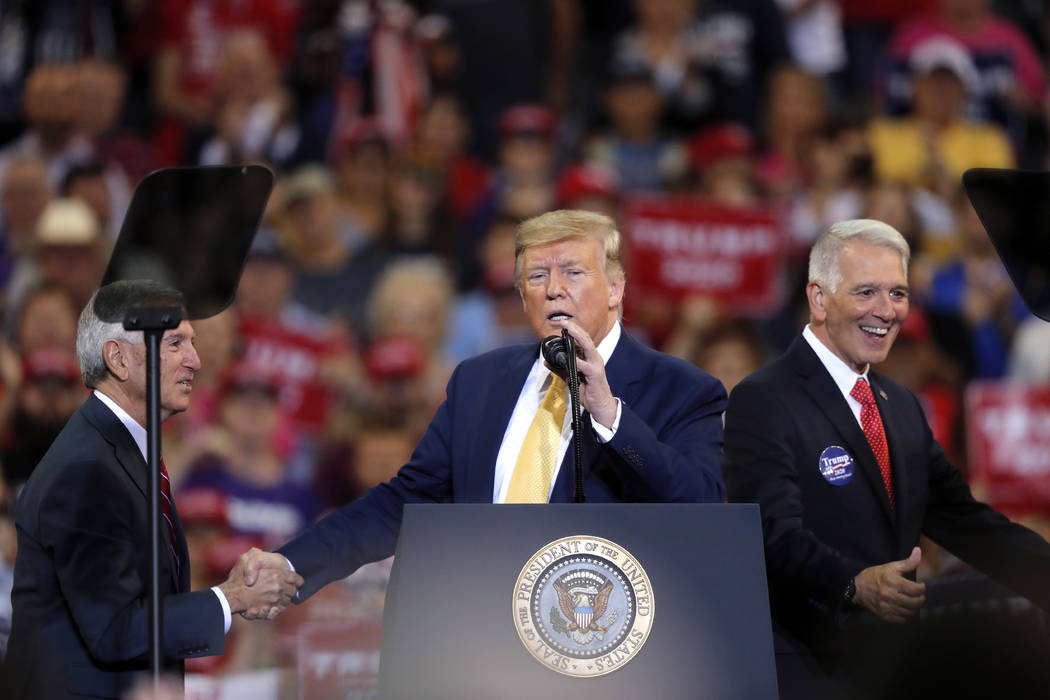 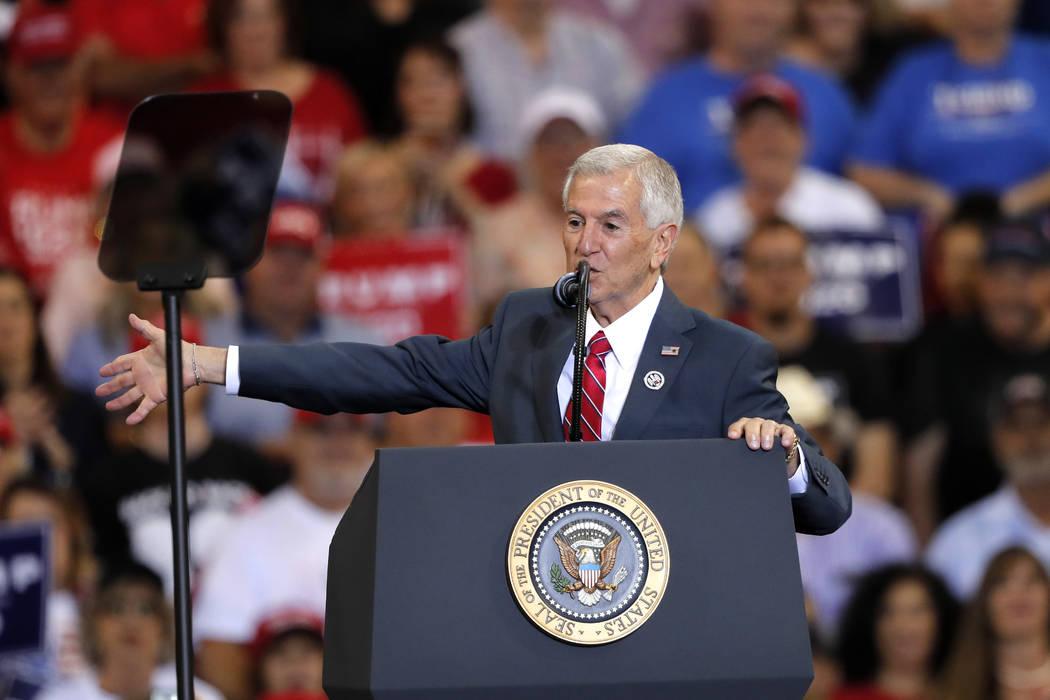 BATON ROUGE, La. — Louisiana Gov. John Bel Edwards’ quest for a second term as the Deep South’s only Democratic governor will stretch over another month, as voters in his crimson state denied him a primary win Saturday and sent him to a runoff election.

The Democratic incumbent was unable to top 50% of the vote in the six-candidate field, raising questions about his reelection chances against a national Republican offensive that includes President Donald Trump. Trump made a last-minute appeal to Louisiana’s voters to reject Edwards.

“We’ve got a little more work to do,” Edwards told supporters Saturday night. He added: “My fellow Louisianans, we are not going backward. That is exactly what Eddie Rispone would have us do. He wants to put us right back on the path that led us into the ditch.”

Rispone said Abraham called to congratulate him on the race and immediately offer his support.

“With your prayers, we’re going to win. This is just the first step,” Rispone said to cheering supporters. “We’re going to turn this state around.”

Trump praised the outcome of Saturday’s election and took credit for keeping Edwards from a primary victory, saying in a tweet: “The Governor of Louisiana, John Bel Edwards, has done a poor job. NOW HE IS IN A RUNOFF WITH A GREAT REPUBLICAN, EddieRispone. Thank you Louisiana!” He said Edwards’ support fell “after I explained what a bad job the Governor was doing.”

National Republicans bombarded Louisiana with advertising and get-out-the-vote events to keep Edwards from a primary win, with Trump making a last-minute, in-person appeal to Louisiana’s voters. Beyond Abraham and Rispone, three other lesser-known contenders peeled off enough voter support to help push Edwards into the runoff election.

The Republican anti-Edwards onslaught is only expected to intensify over the remaining five weeks of the race.

“Prepare yourselves,” Edwards told his crowd. “Over the next five weeks, the partisan forces in Washington, D.C., are going to pull out all the stops.”

Republicans are seeking to prove that Edwards’ longshot victory in 2015 was a fluke, aided by a flawed GOP opponent, David Vitter, who was hobbled by a prostitution scandal and attacks on his moral character from fellow Republicans in the primary.

Democrats want an Edwards reelection win to show they can compete in a state Trump won by 20 points.

But the 53-year-old Edwards isn’t exactly a Democrat in the national mold.

The West Point graduate and former Army Ranger opposes abortion and gun restrictions, talks of working well with the Trump administration and calls the U.S. House Democrats’ impeachment inquiry a distraction to governing in Washington. He signed one of the nation’s strictest abortion bans.

Throughout his campaign, Edwards sought to make the election a referendum on his performance rather than a commentary on Louisiana views on national politics.

The Democratic incumbent contrasted three recent years of budget surpluses with the deficit-riddled terms of his predecessor, Republican Bobby Jindal. Edwards and the majority-GOP state Legislature passed a tax deal that stabilized state finances and allowed for new investments in public colleges and the first statewide teacher raise in a decade.

“When I took office, the state of Louisiana had the largest budget deficit in our history,” Edwards said. “We did the hard, bipartisan work necessary to right the ship, to strengthen our economy.”

Josh Jansen, voting at Warren Easton High School in New Orleans with his wife and son, cast his ballot for Edwards.

“I just think he’s done a good job. He’s a good mix of Republican and Democrat,” Jansen said. He said he appreciated Edwards’ working across the aisle, which he said is uncommon in U.S. politics these days.

“He has done a very good job in the teeth of opposition from people who should know better. You can’t lower taxes and run a good state,” she said at her Baton Rouge polling place.

Rispone, 70, founder of a Baton Rouge industrial contracting company, presented himself in the mold of Trump, describing himself as a conservative outsider who would upend the traditional political system of Baton Rouge.

“We need a CEO, someone with serious business experience,” Rispone told supporters. “Both sides of the aisle have failed you. It’s time to do something different.”

He pledged to hold a state constitutional convention to rewrite provisions dealing with the budget and taxes, state employee protections and education, though he provided few specifics. He promised to cut taxes, though it was unclear how he would balance the budget with less money even as he talked of new spending on early childhood education and roadwork.

Voter Barbie Edwards said she supported Rispone when she cast her early vote in the New Orleans area.

Abraham, 65, a doctor and farmer from rural Richland Parish, said the state was losing jobs and opportunities under Edwards’ leadership. He too pledged simultaneous tax cuts and new spending, with few details about how he would pull it off.

Rispone ran a nontraditional campaign, with less of the parade-going and handshaking events usually attended by Louisiana’s gubernatorial candidates. The multimillionaire instead focused on digital and TV advertising, pouring $11 million of his own money into the race.

The effort successfully drowned out advertising by Abraham.

Neither candidate was among the top-tier contenders Republicans had hoped would get in the race. Those better-known figures opted not to run.

In the final week of the campaign, GOP groups reminded voters of Edwards’ former deputy chief of staff, Johnny Anderson, who resigned in 2017 amid allegations of sexual harassment. Anderson’s accuser was prominently featured in one ad that noted Edwards hired Anderson even though Anderson had previously been accused of sexual misconduct.