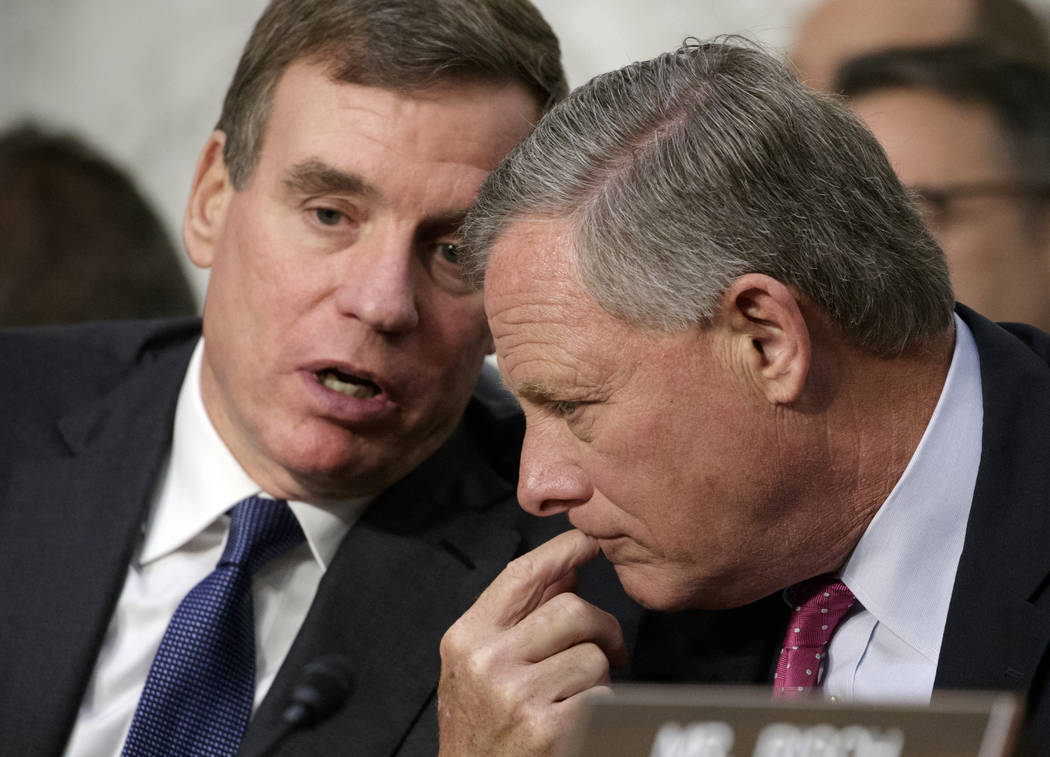 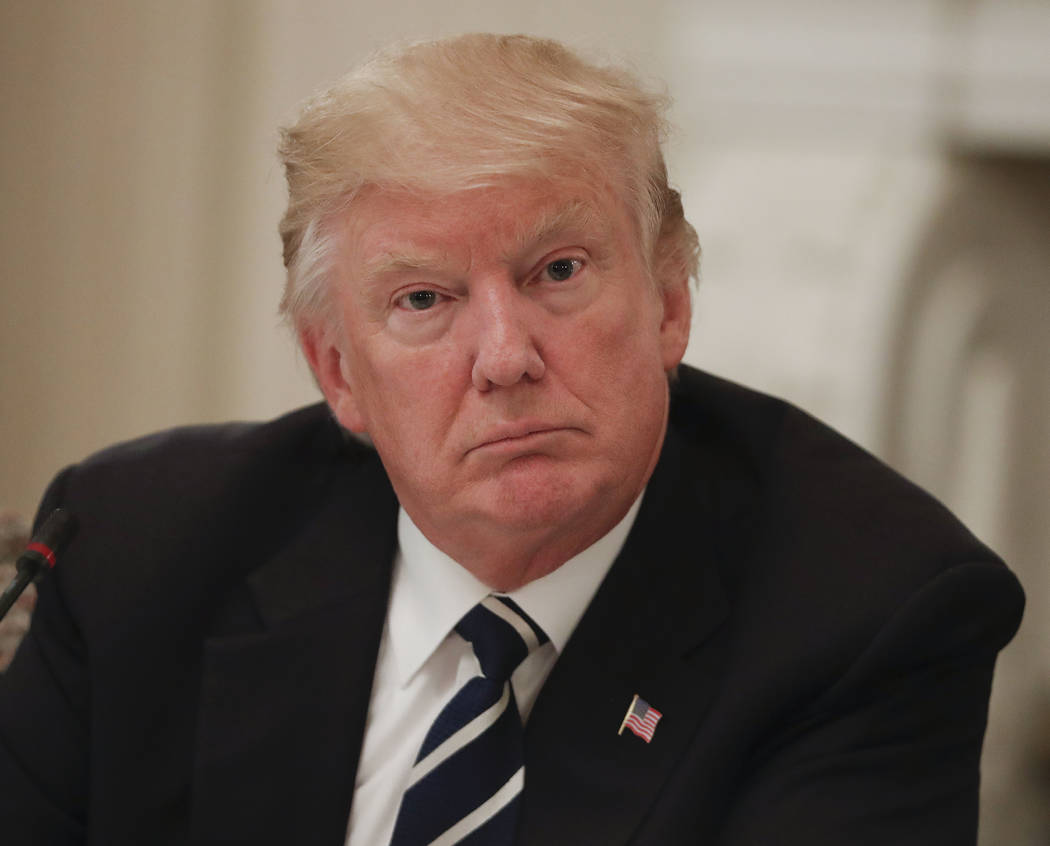 President Donald Trump listens during his meeting with U.S. Mayors and Governors for a Infrastructure Summit in the State Dinning Room of the White House in Washington, Thursday, June 8, 2017. (Pablo Martinez Monsivais/AP) 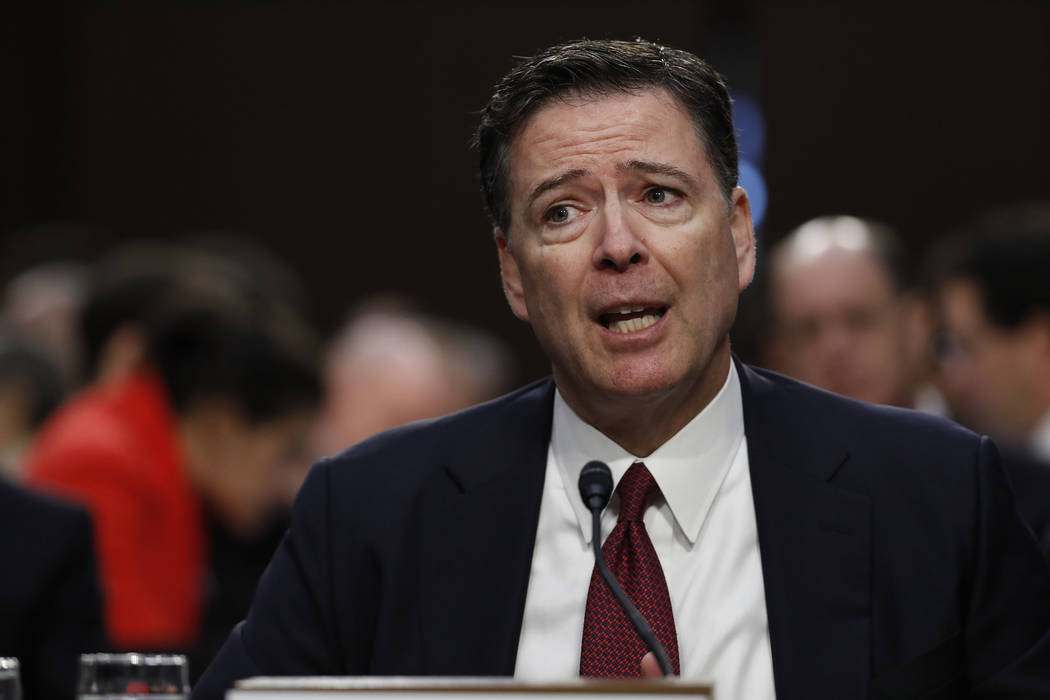 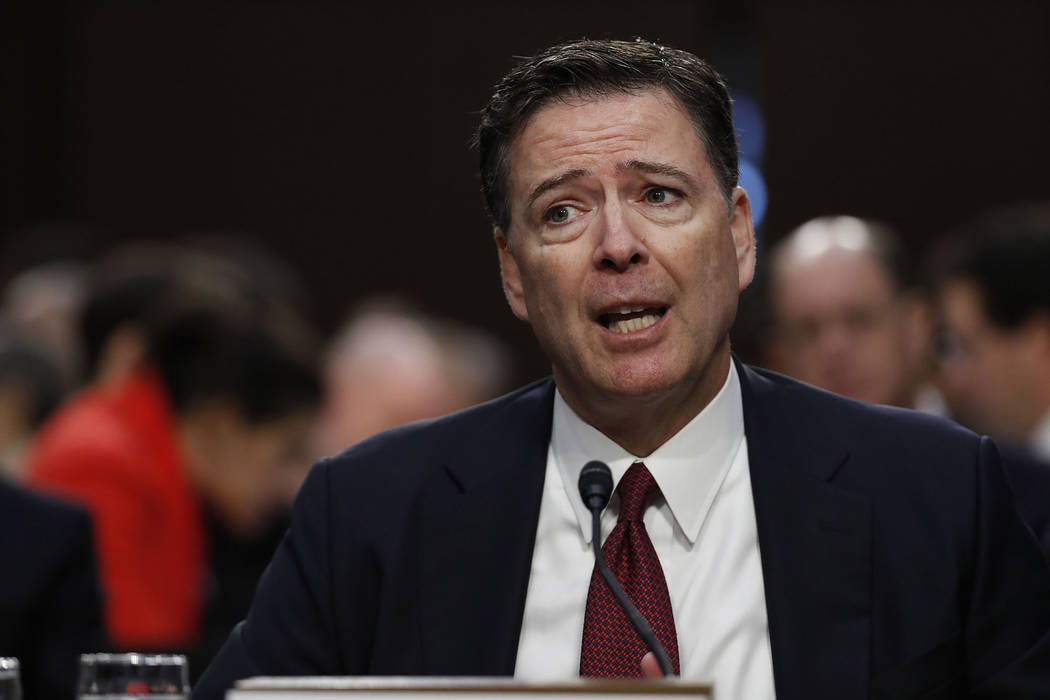 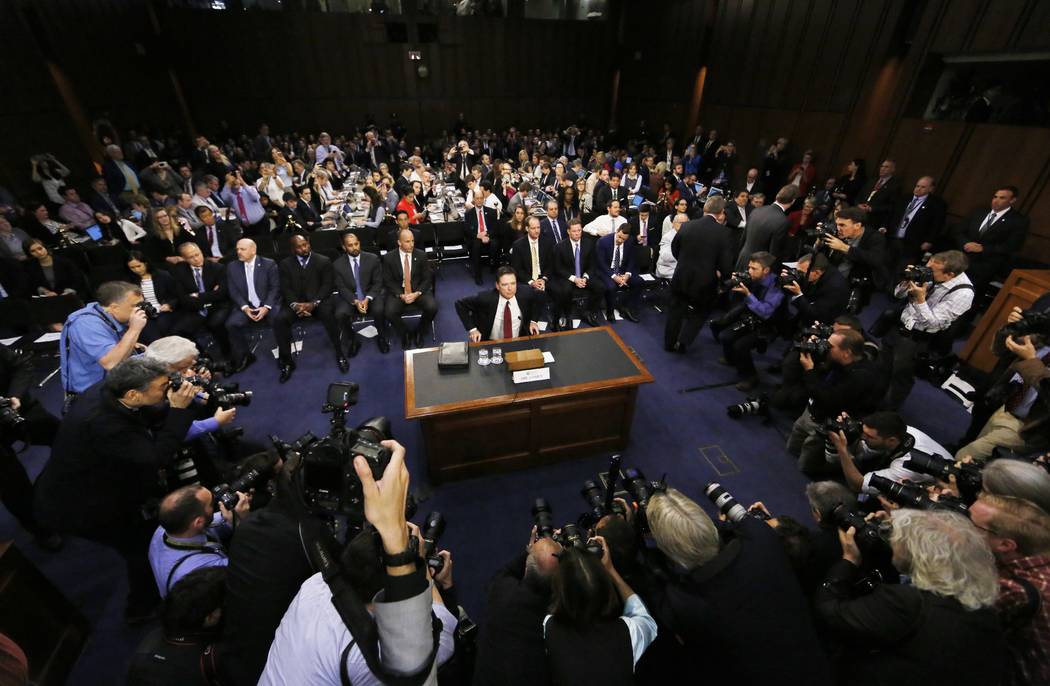 Former FBI Director James Comey is seated prior to testifying before a Senate Intelligence Committee hearing on Russia's alleged interference in the 2016 U.S. presidential election on Capitol Hill in Washington, U.S., June 8, 2017. REUTERS/Jim Bourg TPX IMAGES OF THE DAY 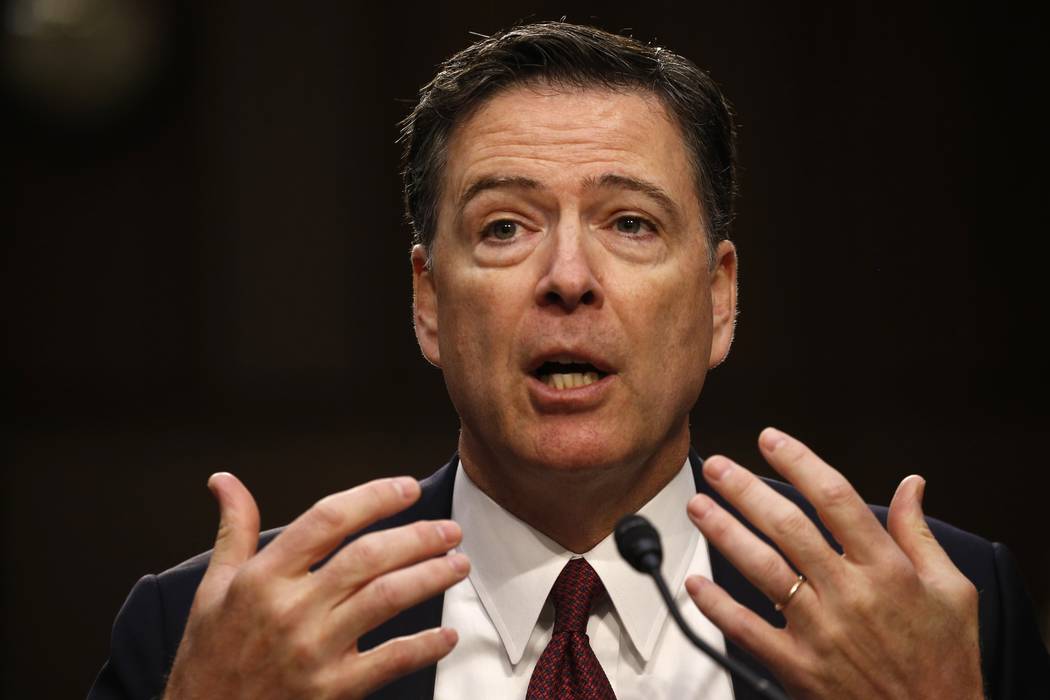 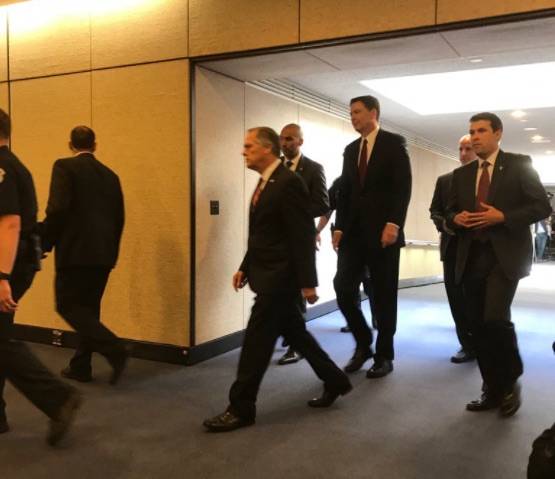 Comey, testifying under oath before the Senate Intelligence Committee, said Trump defamed him and the FBI when he claimed the firing was due to the director’s poor leadership that left the law enforcement agency in disarray.

“Lies, plain and simple,” Comey testified in one of the most highly awaited congressional hearings broadcast on television and cable networks.

In a dramatic appearance that lasted nearly three hours, Comey detailed his deep distrust of Trump.

Comey outlined four months of presidential conversations that centered on the FBI investigation into possible collusion between Trump campaign officials and the Russians who meddled in the 2016 election. He said that was the basis for his dismissal.

“I was fired because of the Russia investigation,” Comey said.

Trump, in a Washington speech to a faith group, did not mention Comey. He declined comment at a White House event later.

But his lawyer, Marc Kasowitz, said after the hearing that Comey confirmed “the president was not under investigation as part of any probe into Russian interference.”

White House supporters and some Republicans echoed that line.

“Nothing that’s happened that you have testified to here today has impeded the investigation of the FBI?” Sen. John Cornyn, R-Texas, asked.

Sen. Mark Warner, D-Va., the top Democrat on the Intelligence Committee, called the president’s behavior “shocking” and vowed to continue the panel’s probe.

“We are going to get to the bottom of this,” Warner said. “The American people deserve to know.”

Comey said he was fired to change “the way the investigation was being conducted.”

“That is a very big deal, and not just because it involves me,” he said.

His statements bolstered bombshell written testimony he released a day before his appearance.

In that testimony, Comey said the president expressed his concerns that the FBI investigation into Russian meddling and his campaign was creating a “cloud.”

Although Trump was assured by Comey that he was not under investigation, the president dangled the director’s job in the conversation during a White House dinner. Comey said the president’s comments were awkward and made him uncomfortable.

“I was honestly concerned that he might lie about the nature of our meeting, so I thought it really important to document,” Comey said, explaining that he began writing detailed notes.

Several senators, including Dianne Feinstein, D-Calif., asked why the 6-foot 8-inch tall Comey didn’t confront Trump and tell the president his questions were troubling or improper.

“I was just so stunned by the conversation,” Comey said.

He asked Attorney General Jeff Sessions to prevent Trump from directly contacting the FBI about the investigation because it was “inappropriate and should never happen.”

After his firing, the former FBI director asked a friend at Columbia Law School to leak a memo detailing the conversations with the president to the media.

“I thought it might prompt the appointment of a special counsel,” Comey revealed.

Former FBI Director Robert Mueller was appointed by the Justice Department as a special counsel after the firing. He is conducting a criminal investigation into allegations of collusion and and obstruction of justice charges.

Kasowitz said the president’s legal team would “leave it to the appropriate authorities to determine whether these leaks should be investigated along with all those others being investigated.”

Sen. Catherine Cortez Masto, D-Nev., said Comey’s testimony “reiterates the importance of the ongoing independent investigation. The future of our country’s democracy depends on it.”

Trump won a shocking victory in November over former Secretary of State Hillary Clinton, who blamed her loss in part on Russian hacking and Comey, who announced just before the election the extended FBI scrutiny into the release of classified information from her private email servers.

Comey told the committee Trump demanded his “loyalty,” a claim disputed by the president’s attorney, and wanted him to alter the direction of the Russian probe.

Trump wanted an investigation into former National Security Adviser Michael Flynn, who was under FBI scrutiny for his calls to Russian ambassador Sergey Kislyak after the election, dropped, Comey said.

Those contacts with the Russian ambassador led to the resignation of Flynn, who lied to Vice President Mike Pence about the conversations.

Warner said any interference by the president would be appalling.

Following the hearing, Comey met in a closed-door session with the committee to discuss deeper aspects of the FBI investigation and communications that were classified.

Comey strode out after the closed-door session and walked by reporters and a bank of television cameras on the way out of the Hart Senate Office Building. 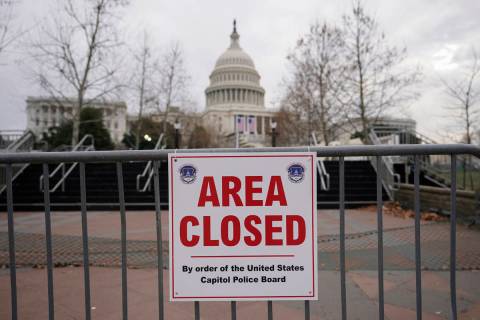 Court documents say Wesley Allen Beeler approached the checkpoint but did not have a valid credential for that area. 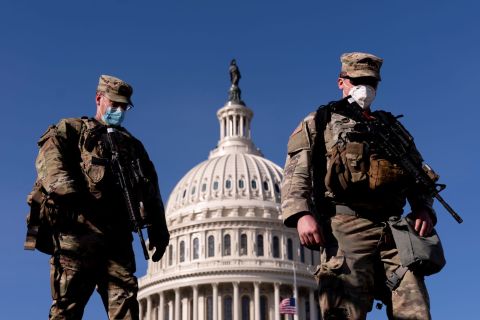 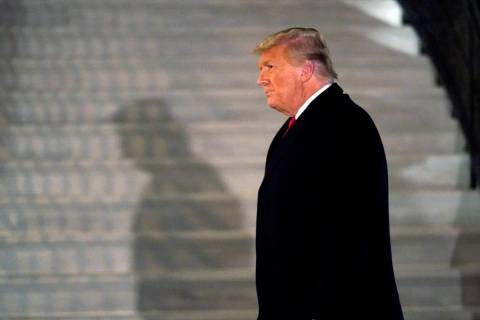