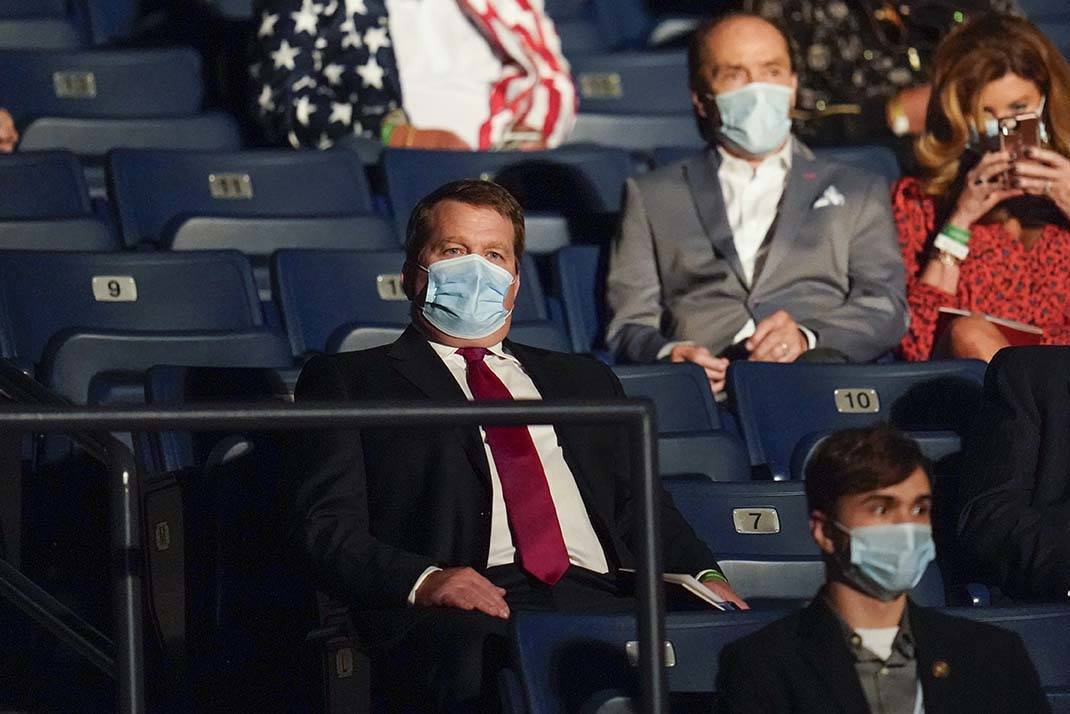 Tony Bobulinski, center seated, who says he is a former associate of Hunter Biden, waits for the start of the second and final presidential debate Thursday, Oct. 22, 2020, at Belmont University in Nashville, Tenn. (AP Photo/Julio Cortez)

WASHINGTON — FBI agents asked Tony Bobulinski, a business associate of Hunter Biden, to sit for an interview Friday into allegations that Joe Biden, the former vice president and Democratic presidential nominee, was aware of his son’s financial dealings with China.

Bobulinski turned over documents that he said support his allegations to the Senate Homeland Security and Governmental Affairs Committee and the Senate Finance Committee, which are looking into the conflict-of-interest accusations.

Lawyers for Bobulinski told the committees on Friday that the FBI has asked for three cellular telephones storing information, and want to interview Bobulinski about the case.

An interview with the FBI on Friday, however, was postponed until an undetermined date.

“I appreciate that the FBI has a job to do, and I am glad they are finally taking an interest in these concerning financial matters that our committees have been investigating for months,” said Sen. Ron Johnson, R-Wis., chairman of the Homeland Security Committee.

Johnson added that, “I expect that Mr. Bobulinski will speak with our committee as soon as possible and fully share his insights into the Biden family’s business dealings.”

The Trump campaign made Bobulinski, a former Navy lieutenant, available to the traveling press corps at the presidential debate on Thursday.

Bobulinski told reporters that he was familiar with business dealings between Chinese officials, Hunter and Jim Biden, the former vice president’s brother.

Bobulinski told reporters he would turn over the three phones, which hold information from 2015 to 2018, to the FBI when he meets with agents.

“The evidence sits on these three phones,” Bobulinski told reporters. “I don’t want to go into anything further. This will be discussed with Senator Johnson and his committee and the American people can decide what’s fact.”

One piece of information is an email Bobulinski has that refers to a business deal which apparently includes an equity split from a Chinese deal for Hunter Biden and “the big guy.”

Bobulinski was a guest of Donald Trump at the debate in Nashville on Thursday, where the president referred to Biden as “the big guy.”

The Biden campaign has called the accusations a “smear campaign” orchestrated by Trump lawyer Rudy Giuliani, who provided information to the New York Post, which first published stories about a possible conflict of interest.

Other major media outlets have reported that they could not corroborate the allegations against Biden.

Biden has released his tax returns which shows no evidence that he received money from any of the businesses deals that Bobulinski has reportedly said included the former vice president.

During the presidential debate on Thursday, Biden flatly denied receiving money from any foreign business deal.

Also during the debate, Biden referred to a Chinese bank account maintained by a Trump Organization company and called on the president to release his income tax returns, as Biden has done.

Officers of the Clark County School Board approved new “assurances” to be added to his employment agreement and mediation of his workplace harassment claims.