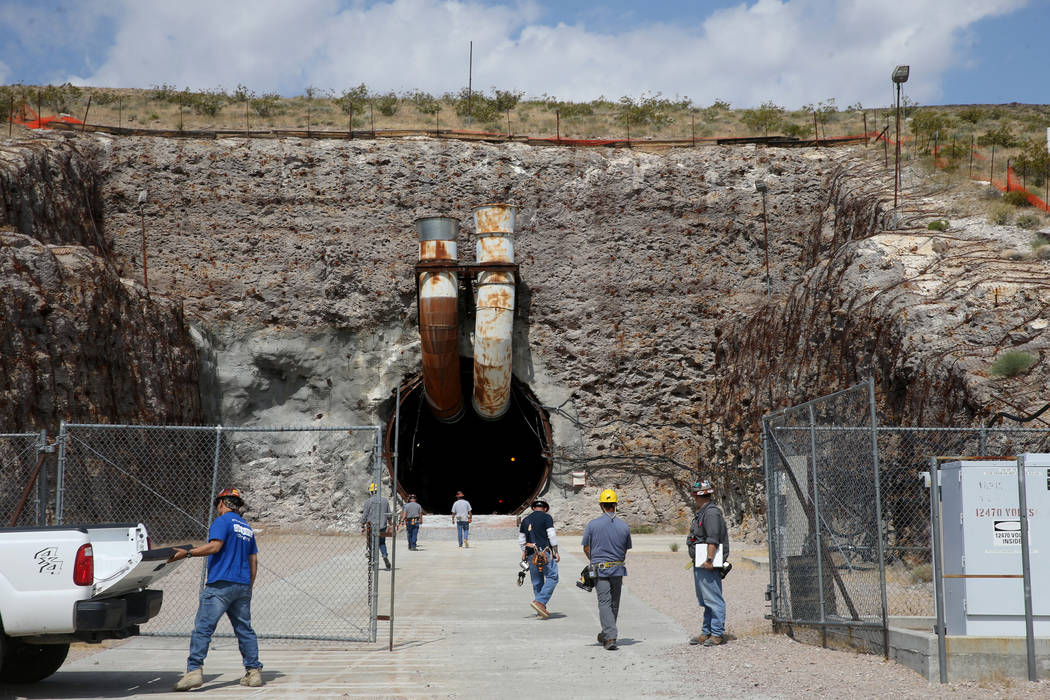 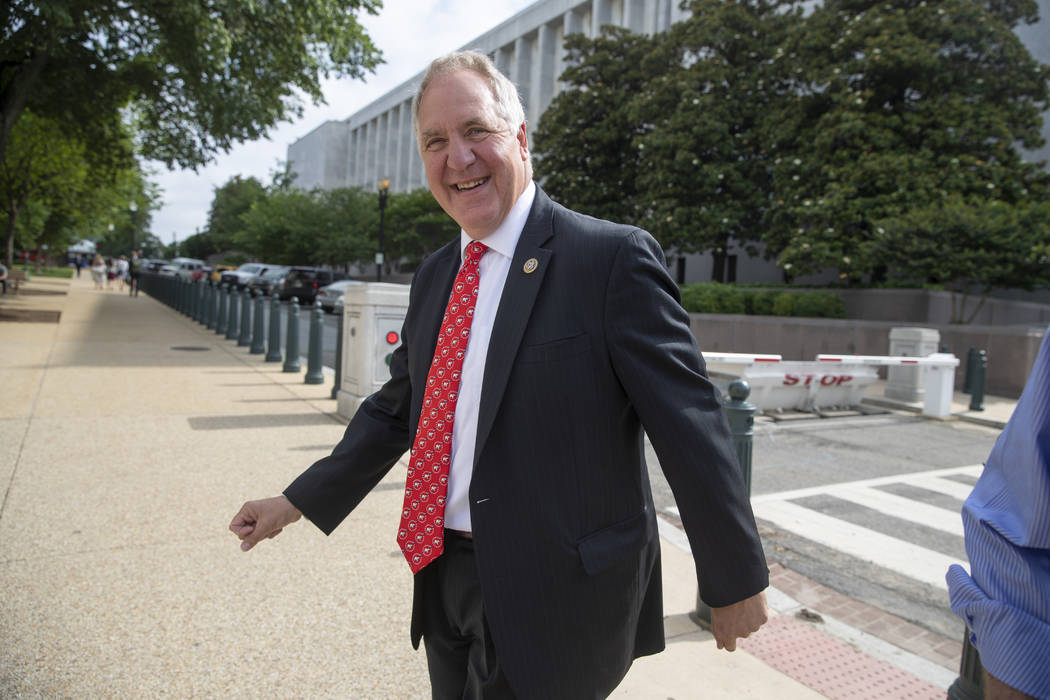 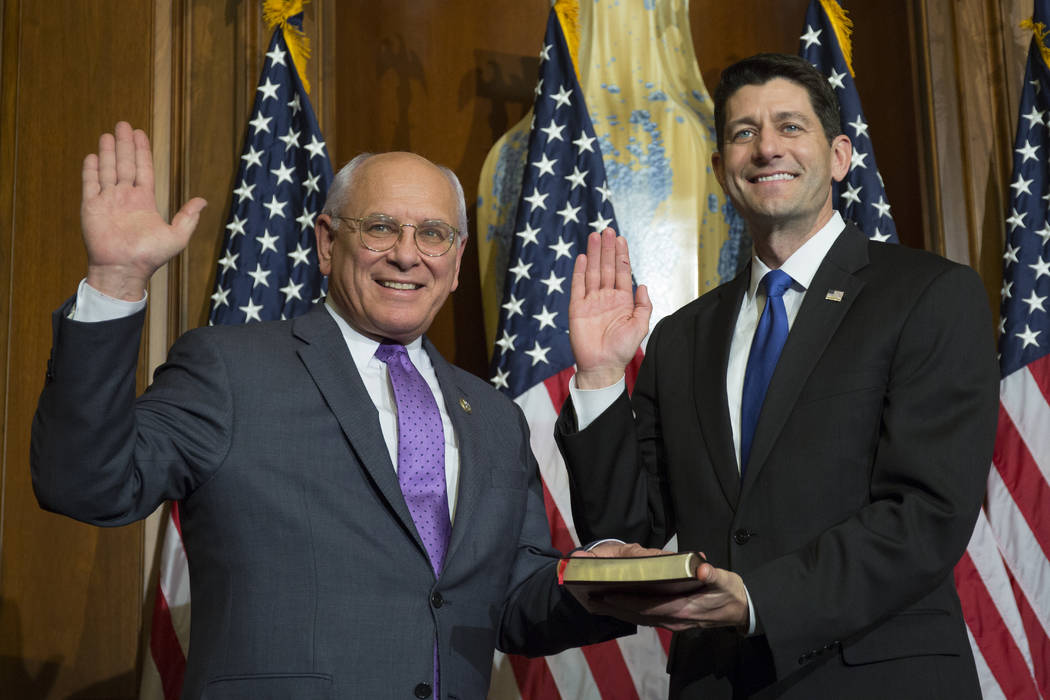 WASHINGTON — A former Department of Energy official who retired after working on the Yucca Mountain project told a House hearing Thursday that Congress should move forward to open the site, despite overwhelming and bipartisan opposition from the state of Nevada.

Lake Barrett, former acting director of the Office of Civilian Radioactive Management, acknowledged Nevada’s concerns but told lawmakers it was time to move forward with nuclear waste disposal after 30 years of delays.

“The federal government has to acknowledge the strengths of Nevada, engage with them and try to work out the issues,” Barrett said.

He said an integrated proposal that includes permanent and temporary repositories would be a step forward in the negotiations.

His testimony was echoed by Nuclear Energy Institute President Maria Korsnick, who argued that spent nuclear waste is stockpiling and needs to be moved from 121 sites in 39 states.

“Congress owes it to these communities to ensure science, not political whims, determines the fate of the Yucca Mountain repository, the nation’s only authorized disposal option,” said Korsnick, whose group represents the nuclear technologies industry.

Notably, no current official from the Department of Energy appeared before the panel, even though the Trump administration has proposed $116 million to revive the licensing process for Yucca Mountain.

Rep. Paul Tonko, D-N.Y., chairman of the House Energy and Commerce subcommittee on energy and climate change, his legal aides and an aide to Rep. John Shimkus, R-Ill., the ranking Republican on the panel, offered no explanation why no one from the department testified.

But witnesses and Democratic lawmakers who oppose the licensing of Yucca Mountain saw the absence as a signal that legislation being considered by the subcommittee is unlikely to move forward.

Gov. Steve Sisolak, in a letter to the panel, was firm about Nevada’s opposition.

“Not one ounce of nuclear waste will reach Yucca Mountain while I’m governor,” Sisolak said in the letter.

“I fully intend to keep my promise to the people of Nevada and fight any attempts to restart the failed Yucca Mountain program,” he said.

The state’s nuclear projects expert, Bob Halstead, told the subcommittee the Energy Department “bungled” all aspects of nuclear waste storage in past years.

And he warned the panel that Nevada was financially prepared to fight Yucca Mountain proposals in Congress, before the Nuclear Regulatory Commission and in federal courts.

Halstead told the panel the geological formation where the waste would be stored would require man-made barriers to stop contamination of groundwater.

He said the state has 218 legal challenges to the license application before the Nuclear Regulatory Commission. There are 30 more being prepared.

Even if the federal government receives a license, “the earliest realistic date that the proposed Yucca Mountain repository could receive spent fuel from decommissioned and decommissioning reactors would be 20-25 years from now, if ever,” Halstead said.

Geoffrey Fettus, senior attorney with the National Resources Defense Council, said the licensing process would cost $330 million, take several years and “waylay the process of developing (an alternative) repository for a significant period of time.”

Funding to continue the licensing process for Yucca Mountain was stripped this year from a House spending bill for the Energy Department for fiscal 2020, which will begin Oct. 1.

The House Energy and Commerce subcommittee on environment and climate change is weighing three bills that would authorize spending on nuclear waste storage.

One of the bills, filed by Shimkus and Rep. Jerry McNerney, D-Calif., focuses mostly on moving forward on Yucca Mountain as a permanent repository. It is similar to a measure filed in the Senate by Sen. John Barrasso, R-Wyo., chairman of the Senate Environment and Public Works Committee.

Another House bill would authorize temporary storage sites, and a third would prioritize moving radioactive waste from decommissioned plants in seismic areas, like coastal California and Maine, to a temporary or permanent site.

Nevada focuses on one bill

Nevada opponents of Yucca Mountain focused on the McNerney-Shimkus bill.

Rep. Steven Horsford, D-Nev., whose congressional district includes the proposed repository site, said the bill would increase the cap on storage “from 70,000 metric tons to 110,000 metric tons, paving the way to force all of the nation’s nuclear waste on Yucca Mountain.”

Rep. Dina Titus, D-Nev., called the McNerney-Shimkus bill irresponsible and said Yucca Mountain opponents have already scored a victory by keeping funds out of the House spending bill for the Department of Energy.

“We have already beaten back stronger threats, and I’m confident that this reckless legislation will not see the light of day,” Titus said.

The Nevada Resort Association, business groups in the state, environmentalists and tribal leaders also opposed federal efforts to bury nuclear waste in the desert 90 miles north of Las Vegas at a site Shimkus said would be safe for “one million years.”

Officials in Nye County, where Yucca Mountain is located, as well as eight other rural Nevada counties support restarting the licensing process to determine if the site is safe for waste storage. They see economic benefits to developing a repository.

Yucca Mountain was designated as the site for permanent disposal for nuclear waste from power plants and Navy ships by Congress in 1987.

Although the Energy Department applied for a construction permit to build the facility under the Bush administration, officials with the department under the Obama administration shut down the process in 2011.

No funding was approved for licensing hearings on Yucca Mountain in 2012, when Sen. Harry Reid, D-Nev., served as Senate majority leader.