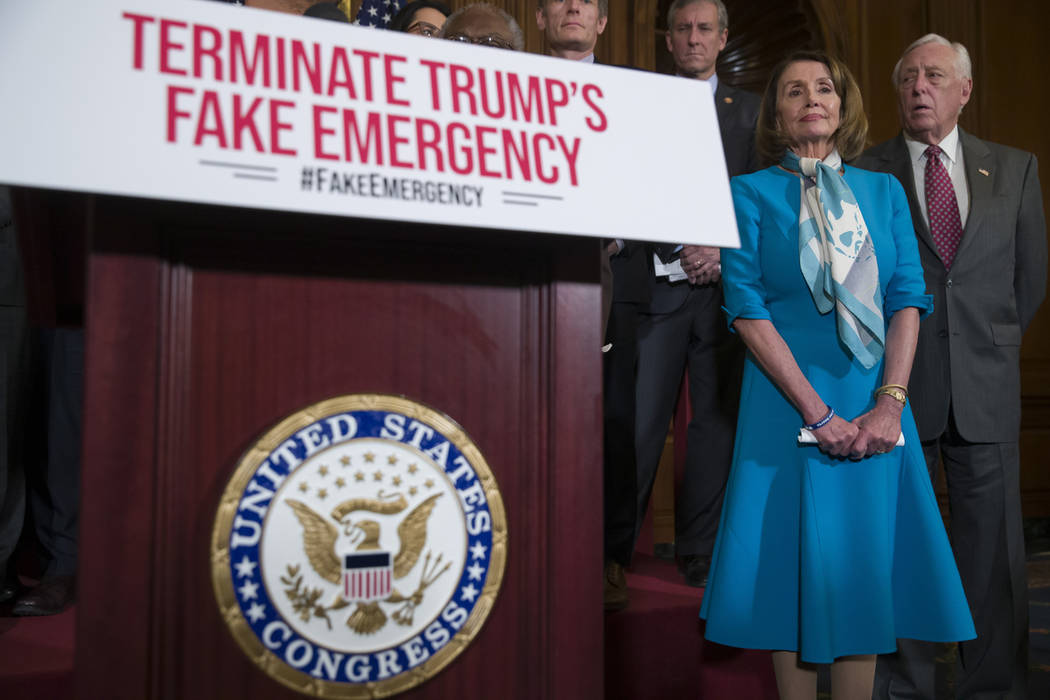 House Speaker Nancy Pelosi of Calif., left, stands with House Majority Leader Steny Hoyer of Md., and others, listens to a speaker about a resolution to block President Donald Trump's emergency border security declaration on Capitol Hill, Monday, Feb. 25, 2019 in Washington. House Democrats have introduced a resolution to block the national emergency declaration that President Donald Trump issued last week to fund his long-sought wall along the U.S-Mexico border, setting up a fight that could result in Trump's first-ever veto. (AP Photo/Alex Brandon) 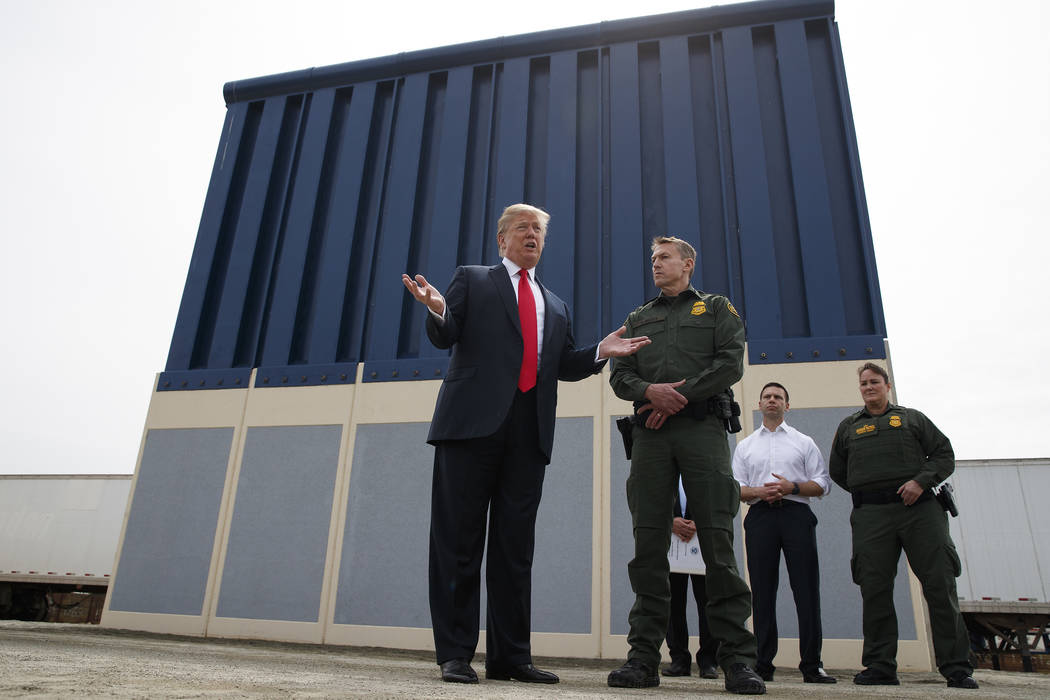 WASHINGTON — Former Republican lawmakers and a bipartisan group of past national security officials criticized President Donald Trump’s national emergency declaration on the eve of a House vote to terminate the president’s plan to circumvent Congress.

The House is expected to vote Tuesday on a resolution of disapproval of the president’s declaration of a national emergency at the southern border. The declaration would allow him to tap Pentagon and Treasury Department funds to help pay for a wall between the United States and Mexico.

The resolution is expected to pass in the Democrat-controlled House and could advance in the Senate, where only four GOP defections and a united Democratic caucus could achieve the simple majority needed to send the bill to the president’s desk.

Trump sounded a warning on Twitter to wavering Senate Republicans.

“I hope our great Republican senators don’t get led down the path of weak and ineffective Border Security,” Trump wrote, adding that GOP lawmakers should be strong and not fall into the Democrats’ trap “of Open Borders and Crime.”

The president’s plea comes after his pledge to veto the bill if it is sent to his desk and his prediction that neither the House nor the Senate could muster the two-thirds majority to override that veto.

Trump’s message also came after nearly two dozen former GOP lawmakers urged Republicans to vote in favor of the resolution, citing the precedent the president would set by circumventing Congress to fund a pet project the House and Senate have rejected.

In a letter, the former GOP lawmakers, none from Nevada, said “our oath is to put the country and its Constitution above everything, including party politics or loyalty to a president.”

“If you allow a president to ignore Congress, it will be not your authority but that of your constituents that is deprived of the protections of true representative government,” the letter read.

Pressure also is building on lawmakers over Trump’s plan to use $3.6 billion in Pentagon accounts, including money authorized for military construction projects in states nationwide, to fund the wall construction.

Meanwhile, a bipartisan group of former national security officials also urged Congress to pass the resolution, saying that no real emergency exists along the border to justify the president’s attempt to usurp the congressional “power of the purse.”

The former security officials — who served under Presidents George H.W. Bush, Bill Clinton, George W. Bush and Barack Obama — said illegal crossings along the southern border are at a 40-year low and apprehensions have decreased dramatically over a 10-year period. The officials cited statistics from the Department of Homeland Security.

“We are aware of no emergency that remotely justifies such a step,” the former national security officials wrote.

Trump, however, told a gathering of the nation’s governors Monday that human trafficking and narcotics smuggling have created a need for a border wall.

The president declared a national emergency on Feb. 15 after a bipartisan, bicameral spending bill was cobbled together and passed overwhelmingly by the House and Senate to avoid a second partial government shutdown.

Lawmakers included $1.37 million for fencing and other border security measures but rejected Trump’s request for $5.7 billion to build more portions of a wall, a signature pledge of his 2016 campaign that included the caveat that Mexico would pay for the structure.

As the House prepares to vote on the resolution of disapproval, the Nevada congressional delegation appears divided along party lines. The state’s three Democratic House members — Dina Titus, Susie Lee and Steven Horsford — are original co-sponsors of the resolution.

Some Senate Republicans who face re-election in 2020, including Susan Collins of Maine and Thom Tillis of North Carolina, have indicated that they will vote with Democrats in support of the resolution.

If the resolution is passed by the House on Tuesday, Senate Majority Leader Mitch McConnell, R-Ky., would be forced to bring it up for a vote within 18 days.

Federal lawsuits have been filed on behalf of border landowners in Texas and by 16 states with Democratic governors as well as one with a Republican chief executive, Maryland.

The states are concerned about the redirection of congressionally approved federal funds for other programs, including military construction, Pentagon-led drug interdiction and the Treasury Department’s asset forfeiture program, which allows law enforcement to keep money, vehicles and other property seized in narcotics cases.

Trump has predicted that the legal wrangling in federal court will continue to the U.S. Supreme Court, where he says he will prevail.