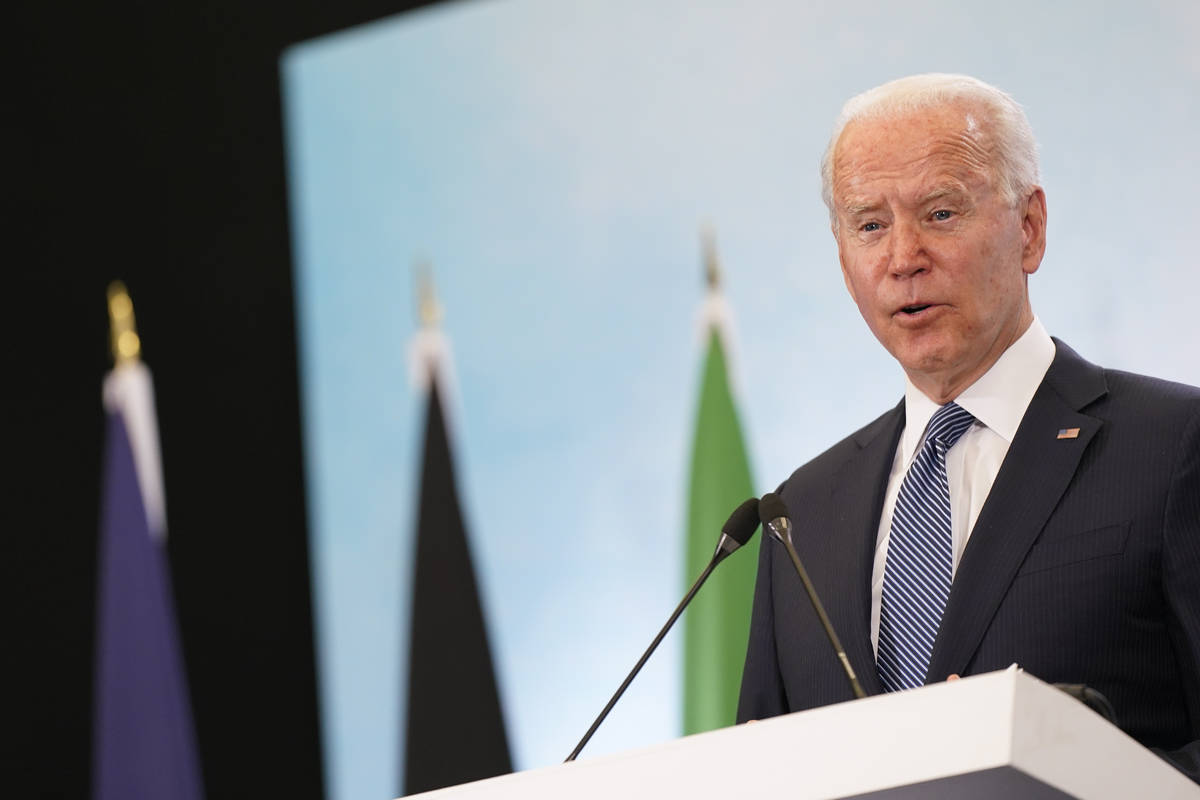 President Joe Biden speaks during a news conference after attending the G-7 summit, Sunday, June 13, 2021, at Cornwall Airport in Newquay, England. Biden is en route to Windsor, England, to meet with Queen Elizabeth II, and then on to Brussels to attend the NATO summit. (AP Photo/Patrick Semansky) 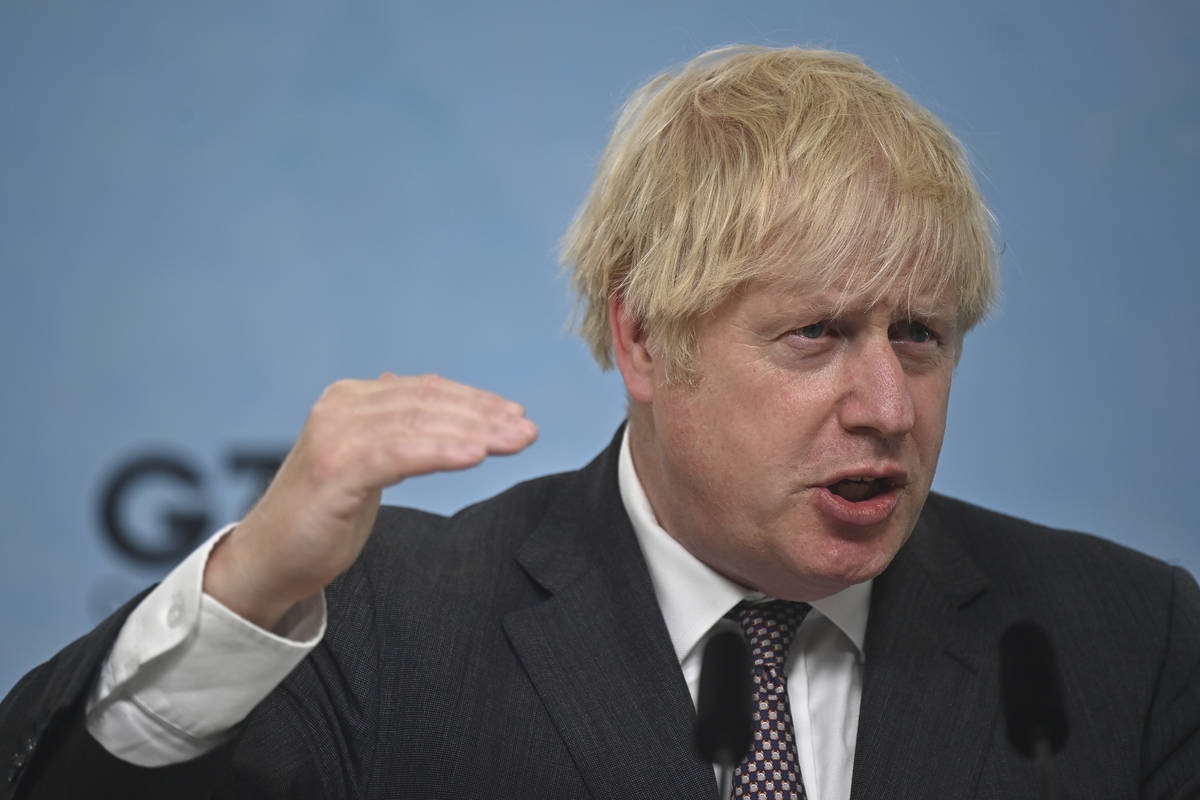 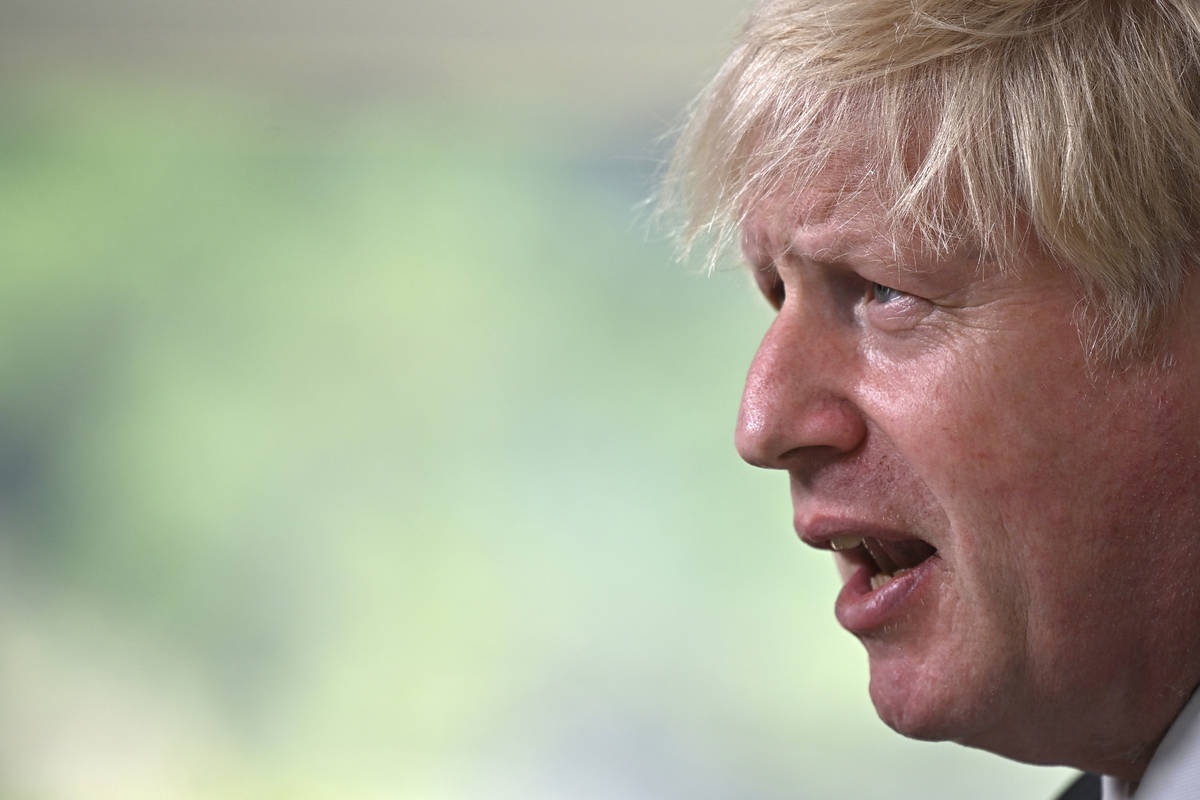 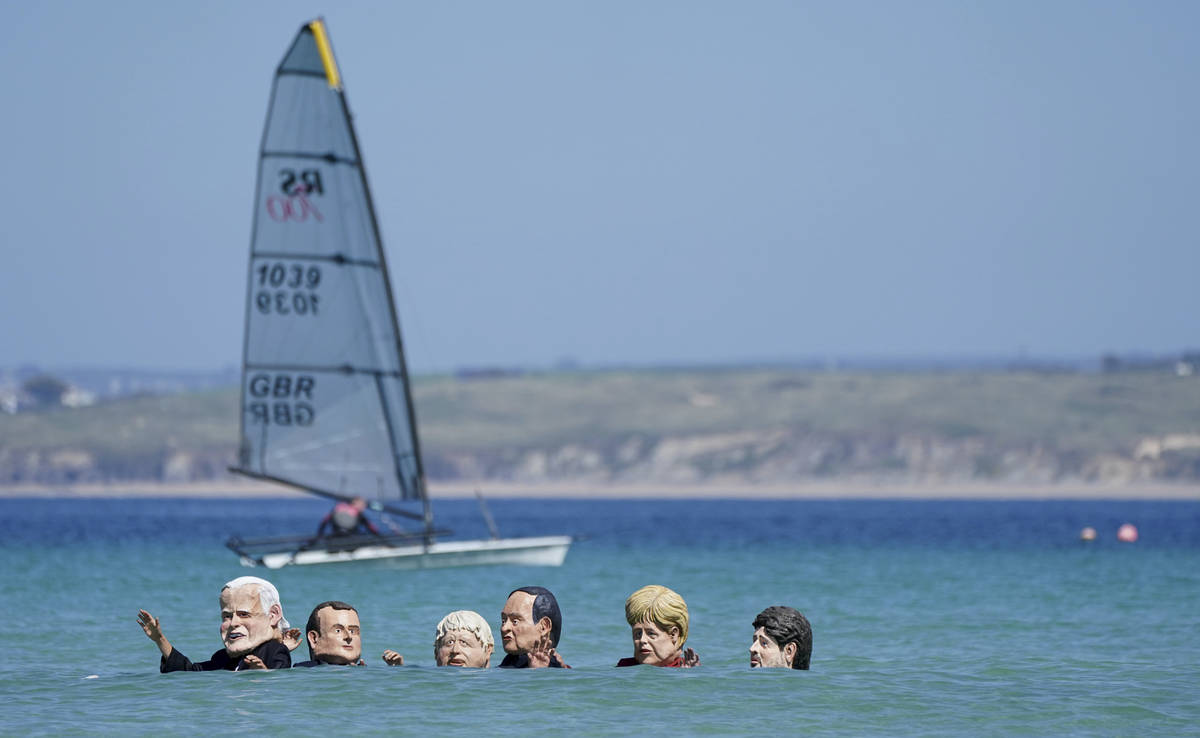 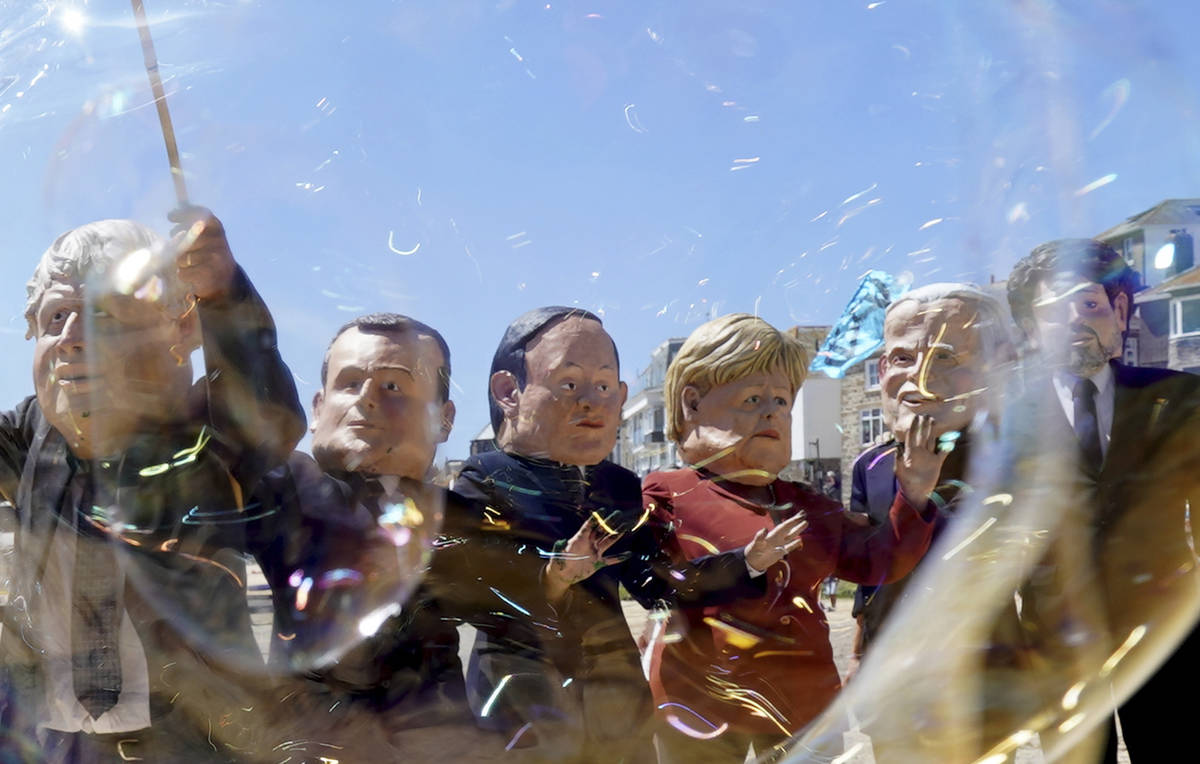 CARBIS BAY, England — Leaders of the Group of Seven wealthy nations staked their claim Sunday to leading the world out of the coronavirus pandemic and crisis, pledging more than 1 billion coronavirus vaccine doses to poorer nations, vowing to help developing countries grow while fighting climate change and backing a minimum tax on multinational firms.

At the group’s first face-to-face meeting in two years, the leaders dangled promises of support for global health, green energy, infrastructure and education.

The leaders wanted to show that international cooperation is back after the upheavals caused by the pandemic and the unpredictability of former President Donald Trump. And they wanted to convey that the club of wealthy democracies — Canada, France, Germany, Italy, Japan, the United Kingdom and the United States — is a better friend to poorer nations than authoritarian rivals such as China.

Speaking at the end of the three-day summit in southwest England, President Joe Biden, who was making his first foreign trip as leader, said it was an “extraordinary, collaborative and productive meeting.”

Johnson said the G-7 would demonstrate the value of democracy and human rights to the rest of the world and help “the world’s poorest countries to develop themselves in a way that is clean and green and sustainable.”

“It’s not good enough for us to just rest on our laurels and talk about how important those values are,” he told reporters after the 3-day meeting on the Cornwall coast. “And this isn’t about imposing our values on the rest of the world. What we as the G-7 need to do is demonstrate the benefits of democracy and freedom and human rights to the rest of the world.”

But health and environmental campaigners were distinctly unimpressed by the details in the leaders’ final communique.

“This G-7 summit will live on in infamy,” said Max Lawson, the head of inequality policy at the international aid group Oxfam. “Faced with the biggest health emergency in a century and a climate catastrophe that is destroying our planet, they have completely failed to meet the challenges of our times.”

Despite Johnson’s call to “vaccinate the world” by the end of 2022 the promise of 1 billion doses for vaccine-hungry countries — coming both directly and through the international COVAX program — falls far short of the 11 billion doses the World Health Organization said is needed to vaccinate at least 70% of the world’s population and truly end the pandemic.

Half of the billion-dose pledge is coming from the United States and 100 million from Britain. Canada said it also would give 100 million doses, and France pledged 60 million.

The vaccines are due to be delivered by the end of 2022, but Biden said the leaders were clear that the commitments they made to donate doses wouldn’t be the end.

The U.S. president said getting shots into arms around the world was a “gigantic, logistical effort” and the goal may not be achieved until 2023.

The G-7 also backed a minimum tax of at least 15% on large multinational companies to stop corporations from using tax havens to avoid taxes.

The minimum rate was championed by the United States and dovetails with the aim of Biden to focus the summit on ways the democracies can support a fairer global economy by working together.

The language on China in the G-7 leaders’ communique from the meeting was more muted than the United States has used, but Biden said he was satisfied. In the communique published Sunday, the group said: “With regard to China, and competition in the global economy, we will continue to consult on collective approaches to challenging non-market policies and practices which undermine the fair and transparent operation of the global economy.”

The leaders also said they would promote their values by calling on China to respect human rights and fundamental freedoms in Xinjiang, where Beijing is accused of committing serious human rights abuses against the Uyghur minority, and in the semi-autonomous city of Hong Kong.

Johnson, the summit’s host, wanted the three-day meeting to fly the flag for a “Global Britain,” his government’s push to give the midsized country outsized global influence.

Yet Brexit cast a shadow over that goal during the summit on the coast of southwest England. European Union leaders and U.S. President Joe Biden voiced concerns about problems with new U.K.-EU trade rules that have heightened tensions in Northern Ireland.

But overall, the mood was positive: The leaders smiled for the cameras on the beach at cliff-fringed Carbis Bay, a village and resort that became a traffic-clogged fortress for the meeting. The last G-7 summit was in France in 2019, with last year’s event in the United States scuttled by the pandemic.

The leaders mingled with Queen Elizabeth II at a royal reception on their first evening and were served steak and lobster at a beach barbecue after watching an aeronautic display by the Royal Air Force Red Arrows on their second.

America’s allies were visibly relieved to have the U.S. back as an engaged international player after the “America First” policy of the Trump administration.

Johnson called Biden “a breath of fresh air.” Italian Premier Mario Draghi said the president “wanted to rebuild what were the traditional alliances of the United States after the period of Trump, during which these alliances were seriously cracked.”

Chancellor Angela Merkel, attending her last G-7 summit as Germany’s leader — she is set to leave office after an election later this year — said the meeting’s message was: “We want to act, we want to act for a better world.”

“We know after the pandemic that this is more necessary than ever,” Merkel said.

Biden flew from the summit in Carbis Bay to have tea with the queen at Windsor Castle. He is scheduled to attend a NATO summit in Brussels on Monday and to hold talks with Russian leader Vladimir Putin in Geneva on Wednesday.

The G-7 also made ambitious declarations during their meetings about girls’ education, preventing future pandemics and financing greener infrastructure globally

On climate change, the “Build Back Better for the World” plan promises to offer financing for infrastructure — “from railways in Africa to wind farms in Asia” — to help speed up the global shift to renewable energy. The plan is a response to China’s “belt and road” initiative, which has increased Beijing’s worldwide influence.

All G-7 countries have pledged to reach net zero carbon emissions by 2050, but many environmentalists say that will be too little, too late.

Naturalist David Attenborough addressed the leaders by video Sunday, warning that humanity is “on the verge of destabilizing the entire planet.”

“If that is so, then the decisions we make this decade — in particular the decisions made by the most economically advanced nations — are the most important in human history,” the veteran documentary filmmaker said.

As the leaders met behind fences and barbed wire, environmental protesters gathered throughout the weekend outside the ring of steel to accuse the G-7 of missing a chance to prevent climate catastrophe.

Large crowds of surfers and kayakers took to the sea in a mass protest to urge better protections for the world’s oceans, while thousands beat drums as they marched outside the summit’s media center in Falmouth.

“G-7 is all greenwashing,” the protesters sang. “We’re drowning in promises, now’s the time to act.”