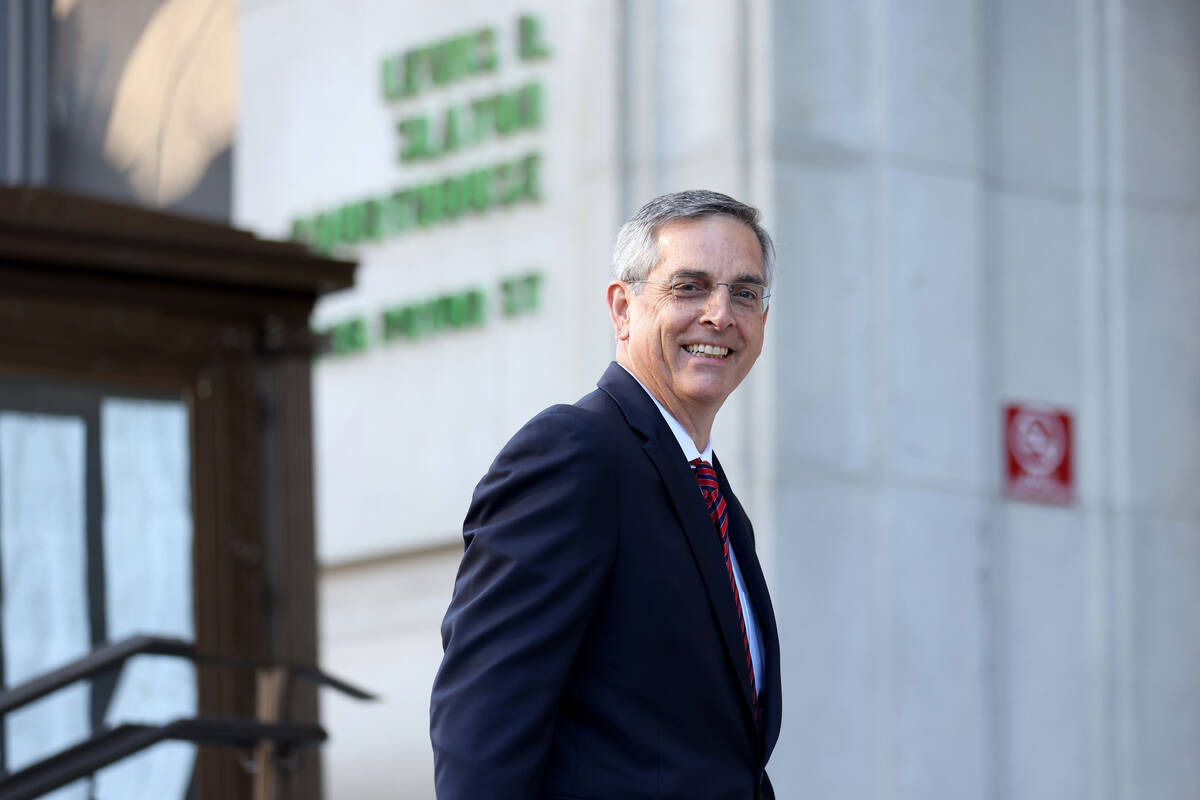 Georgia Secretary of State Brad Raffensperger reacts to members of the media as he enters the Fulton County Courthouse to testify to a grand jury involving the probe into whether former President Donald Trump and others tried to improperly overturn the 2020 election, on June 2, 2022, in Atlanta. (Jason Getz/The Atlanta Journal-Constitution/TNS)

ATLANTA — The Fulton County special grand jury that has spent the last eight months examining potential criminal interference in Georgia’s 2020 presidential election has completed its work and is being dissolved, according to the judge overseeing the high-profile panel.

In a brief order issued Monday, Fulton Superior Court Judge Robert McBurney wrote that the grand jury has fulfilled its duties to his satisfaction.

In addition, a majority of Superior Court judges who have reviewed the special grand jury’s final report agree, his order stated.

“The Court thanks the grand jurors for their dedication, professionalism, and significant commitment of time and attention to this important matter. It was no small sacrifice to serve,” McBurney wrote.

McBurney also scheduled a hearing on Jan. 24, during which parties — including the Fulton District Attorney’s office that advised the jury, the news media and, presumably, investigation targets — will argue whether the grand jury’s report should be made public. Jurors recommended that their report be published, McBurney said.

The 26-member special grand jury — 23 members and three alternates — was greenlit by the Fulton Superior Court a year ago.By a majority vote, its 20 judges approved DA Fani Willis’ request for help in her criminal investigation into whether former President Donald Trump and his allies illegally meddled in Georgia’s last presidential election.

The group was authorized to “investigate any and all facts and circumstances relating directly or indirectly to alleged violations of the laws of the State of Georgia.” It was granted power to subpoena evidence and witness testimony — though not the ability to issue indictments.

Jurors were selected in May and began hearing witness testimony behind closed doors in June. The group questioned manyof the state’s top elected officials, including Gov. Brian Kemp, Attorney General Chris Carr, Secretary of State BradRaffensperger and the late House Speaker David Ralston, as well as dozens of others. It also successfully fought for testimony from some of Trump’s top confidantes, such as his former personal attorney Rudy Giuliani, U.S. Sen. Lindsey Graham and ex-White House Chief of Staff Mark Meadows.

The grand jury’s final report, known as a special presentment, is expected to include a summary of its findings. It may also contain recommendations on whether anyone should be indicted, if a majority of jurors can agree.

The final decision on whether to press charges, however, ultimately rests with Willis, who would need to present evidence before a separate, regular grand jury that has the power to indict.

The Fulton DA’s office declined to comment on Monday. Drew Findling, Trump’s Georgia attorney, did not immediately respond to a request for comment.

There is little legal precedent for special presentments in Georgia, since special grand juries are such a rarity.

The final report is expected to become public at some point. But if McBurney opts to keep it under wraps until the case is over, it could be months or even years before it is released.

There could also be appeals to Georgia’s highest courts. Even if McBurney decides to release the report, portions of it could be redacted until a later time.

“The special grand jury’s work has been a matter of national and local importance,” he said. “The report offers a clear view into the process, and its availability will increase the public’s trust in our system of justice.”

There have been fights over special grand jury reports in the past.

In 2012, the foreman of a DeKalb special grand jury convened to investigate corruption allegations in the county’s Department of Watershed Management sued the judge overseeing the probe to force him to make the special presentment public. The document was eventually released, some seven months after completion.

Launched in February 2021, Willis’ investigation was initially focused on Trump’s leaked Jan. 2, 2021, conversation with Raffensperger, during which the president pressured the secretary to “find” 11,780 votes to overturn Democrat Joe Biden’s narrow win in Georgia.

The probe has since expanded to include: other calls Trump and his associates placed to Georgia officials after the election; the appointment of a slate of “alternate” Republican electors in December 2020; falsehood-laden testimony Giuliani and others gave to Georgia legislators in December 2020; efforts to pressure a Fulton County poll worker to admit to election fraud; the abrupt resignation of Atlanta-based U.S. Attorney Byung “BJay” Pak in January 2021; and the breach of elections data in Coffee County in January 2021.

Willis previously told state officials that her office was probing potential violations of Georgia law including criminal solicitation to commit election fraud, intentional interference with the performance of election duties, conspiracy and racketeering. Legal experts with the Brookings Institution think tanksaid other crimes that might have been committed include false certification, influencing witnesses and computer trespass.

Prosecutors have informed at least 18 people that they are targets of the investigation and could see charges, including Giuliani, the alternate GOP electors and Dallas-based lawyer and podcaster Jacki Pick.

Many fought their summons in court — notably, Graham’s challenge went all the way to the U.S. Supreme Court — and others pleaded the Fifth Amendment against self-incrimination or attorney-client or executive privilege.

Willis and her team won almost every court fight, but there were a few setbacks along the way.

Summons for Pick and a police chaplain who allegedly pressured the Fulton poll worker were rejected by courts in Texas and Illinois, and a Virginia appeals court has apparently yet to move on former House Speaker Newt Gingrich’s petition to avoid testifying. Willis’ biggest about-face came this summer, when McBurney ruled that she couldn’t investigate Republican Burt Jones, one of the GOP electors who’s now the lieutenant governor-elect, due to a conflict of interest.

The biggest question for Willis, a veteran prosecutor known for her work ethic and no-nonsense demeanor, is whether she will opt to indict Trump. Both she and the former president will be on the ballot next year.

“I don’t want you to think I’m naïve or I don’t get the gravity of the situation,” Willis told The Atlanta Journal-Constitution last spring. “I get the gravity of it. … But it’s just like every other case. You just have to do your due diligence.”

No sitting or ex-president has ever been charged with a crime.

Some of Trump’s critics see the Fulton County probe as one of the best chances to hold Trump accountable for what they believe were coordinated actions to undermine democracy and the peaceful transfer of power. Some legal observers say there’s already enough evidence in the public domain — from sources like the Jan. 6 committee, the Raffensperger phone call and elsewhere — to prove in court that Trump broke the law and, crucially, knew that what he was doing was wrong.

Others have dismissed the inquiry as a politically motivated probe from an overly ambitious Democratic prosecutor. Many have argued that Willis is better served by focusing on fighting violent crime and sifting through the substantial backlog of criminal cases leftover from the early days of the COVID-19 pandemic.

For his part, Trump has dismissed the Fulton investigation as a “witch hunt” and called his conversation with Raffensperger “perfect.” The Republican has criticized Willis and other Black prosecutors investigating him as “racist” “radical” and “vicious,” and last year urged his supporters to protest in Atlanta, Washington and other cities if those prosecutors “do anything wrong or illegal.”

Should a case against Trump move forward, his lawyers are expected to fight the Fulton DA every step of the way, which could drag out proceedings for months or longer.