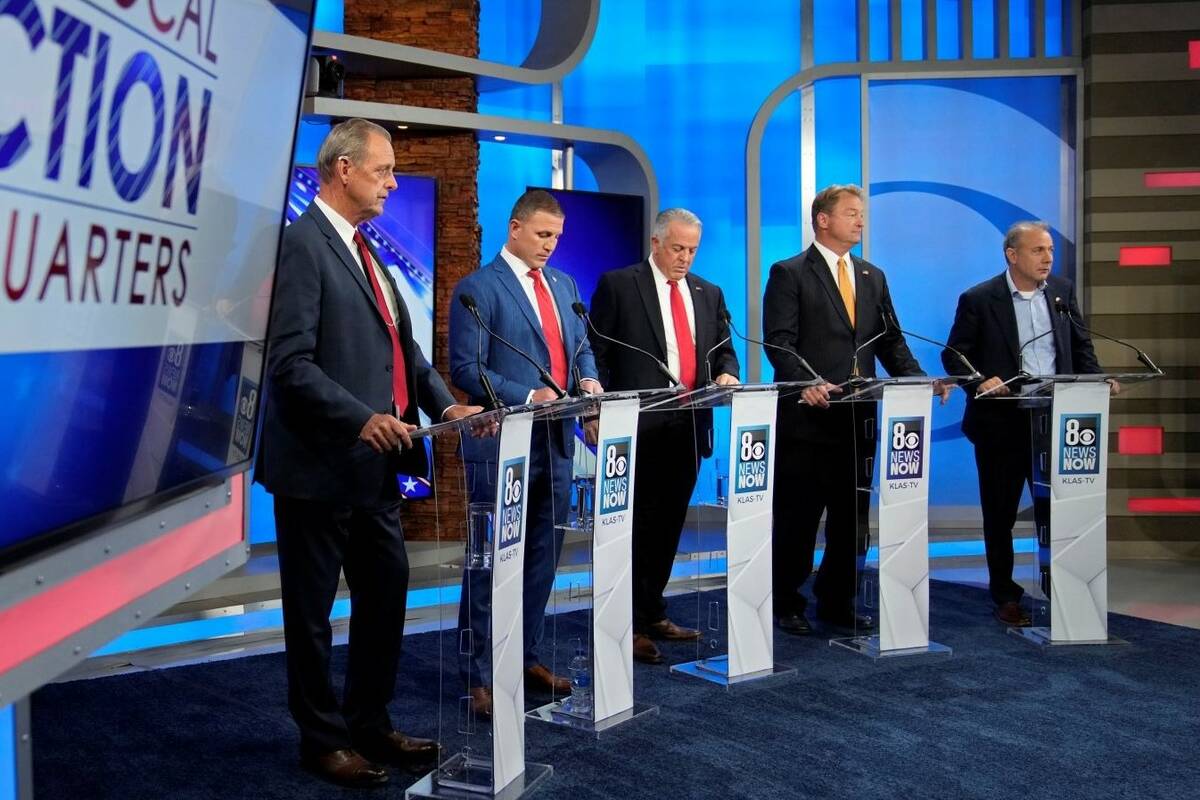 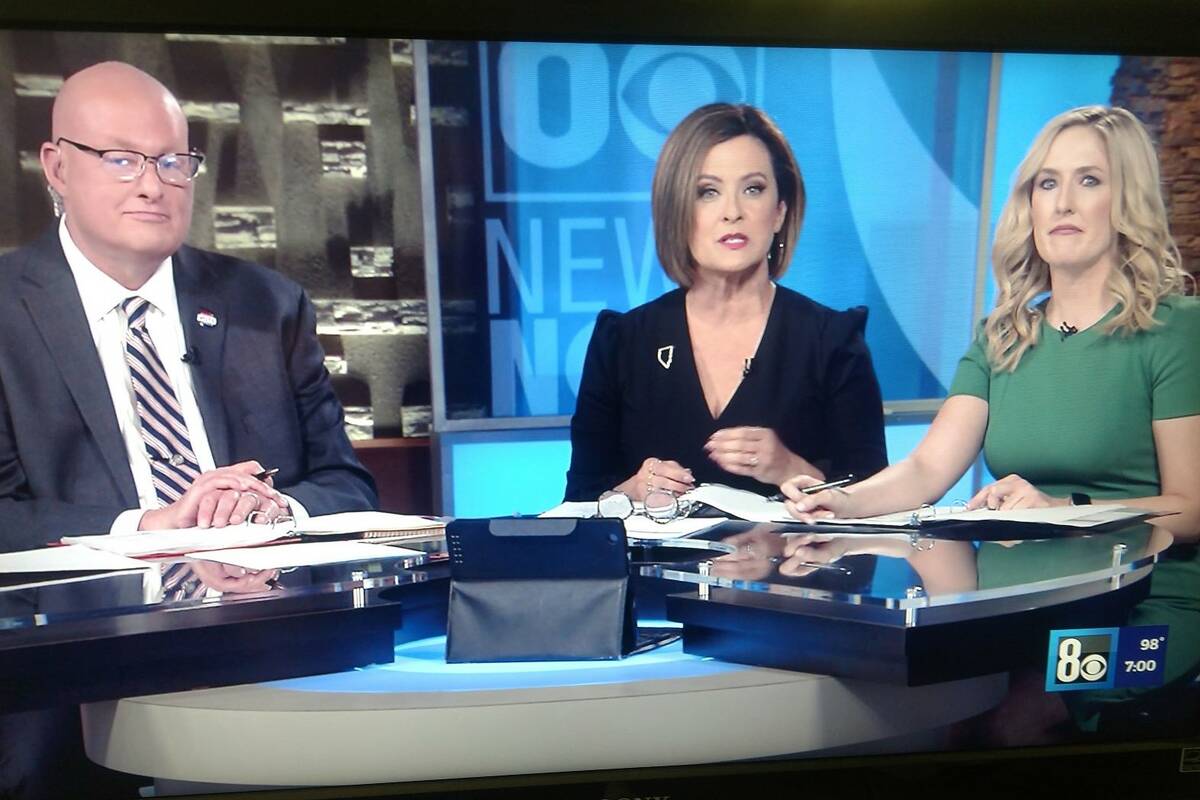 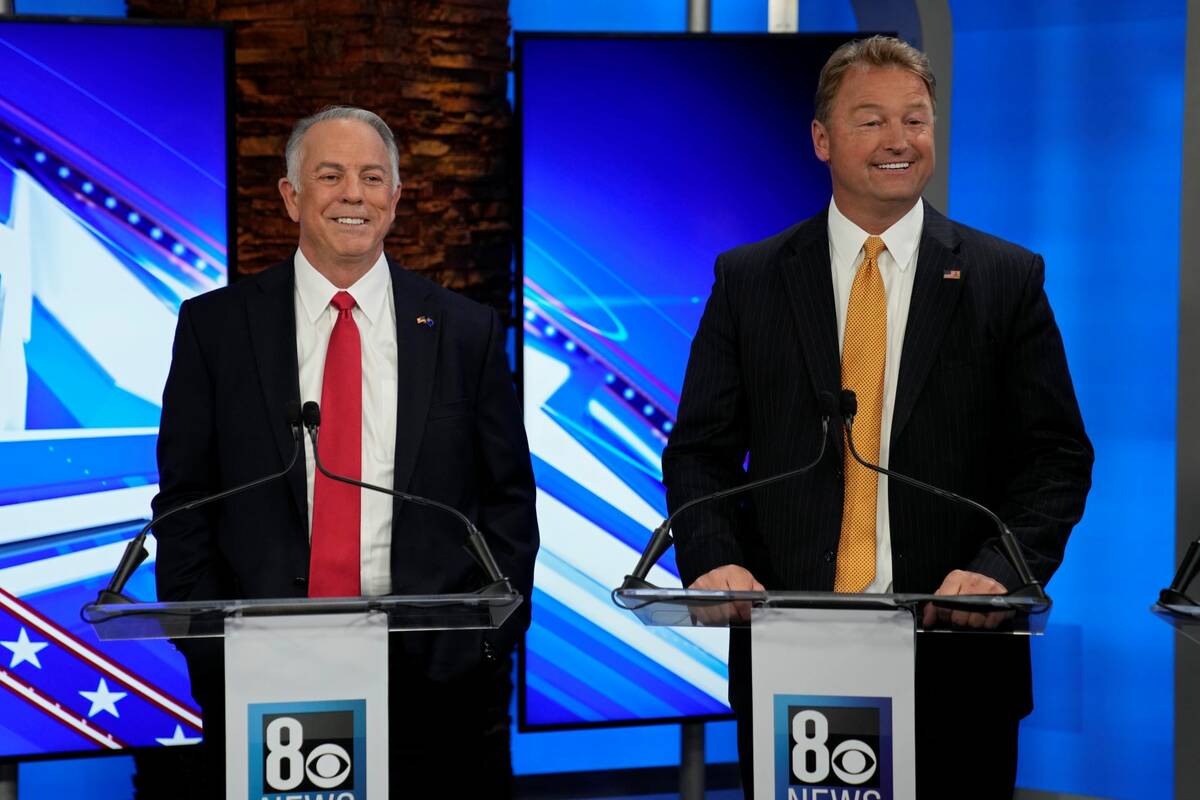 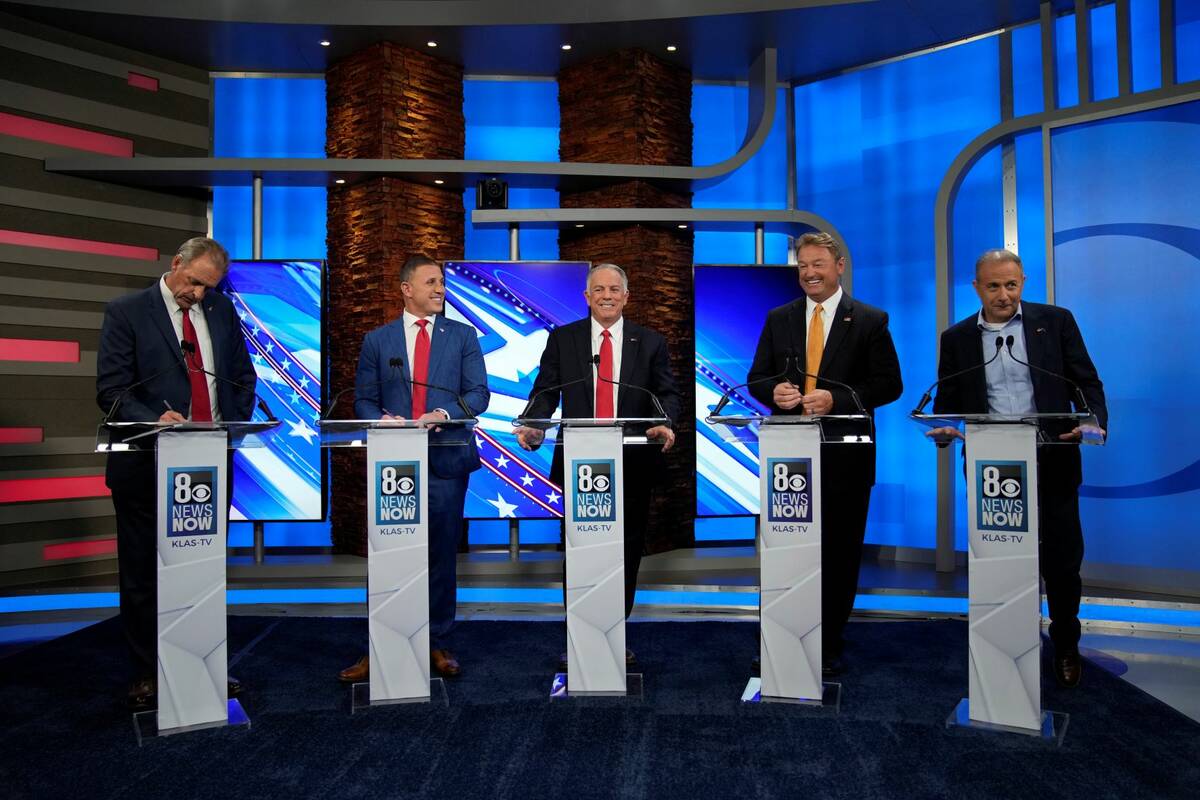 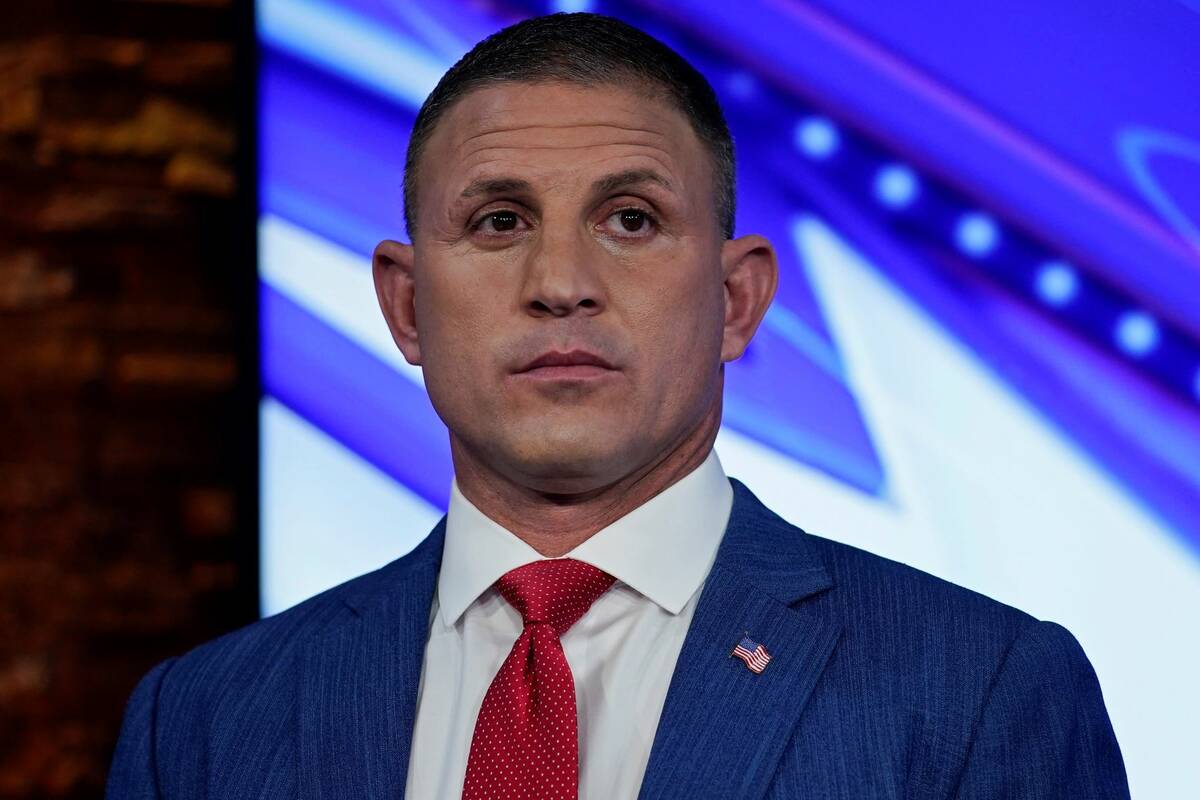 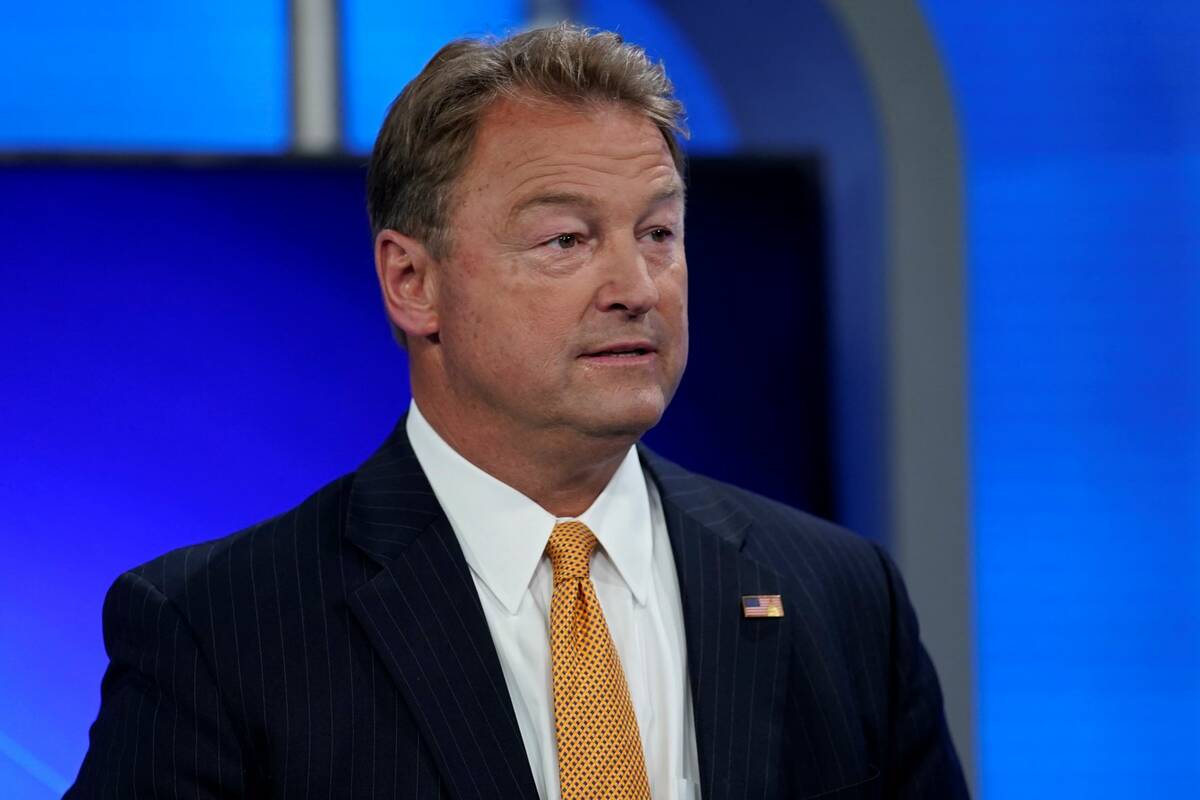 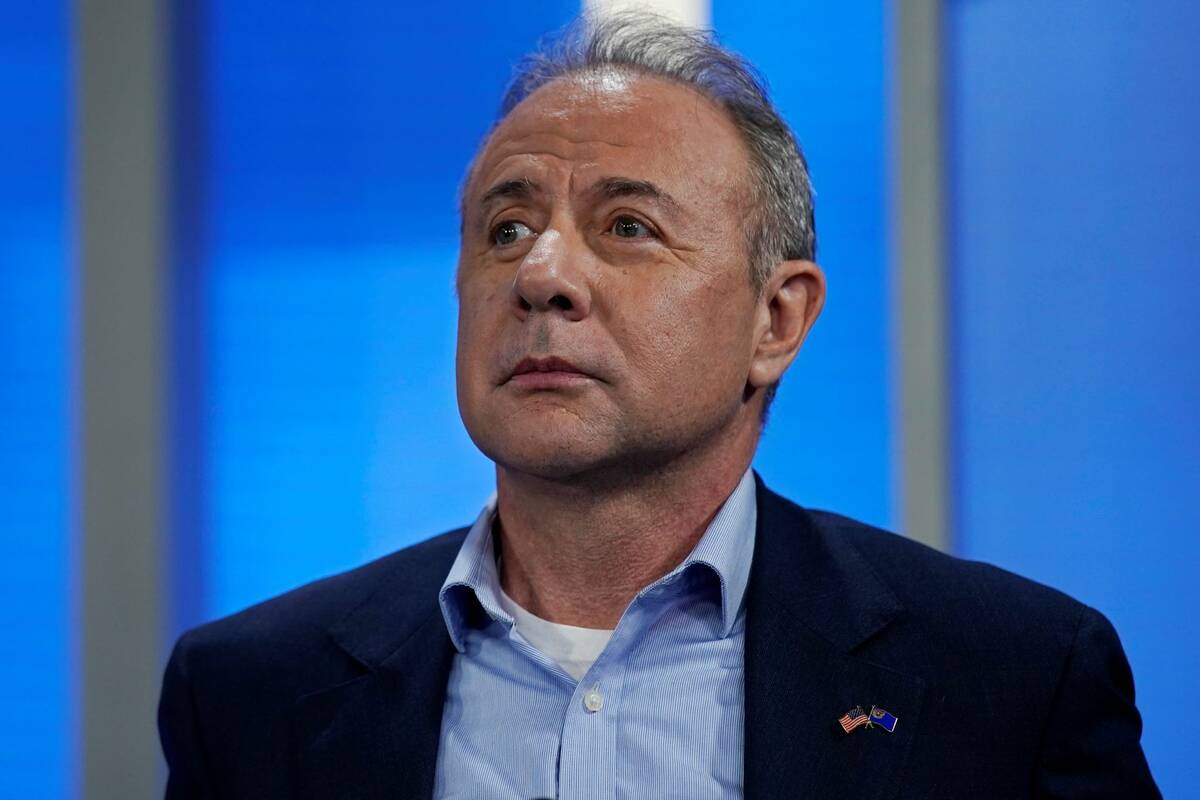 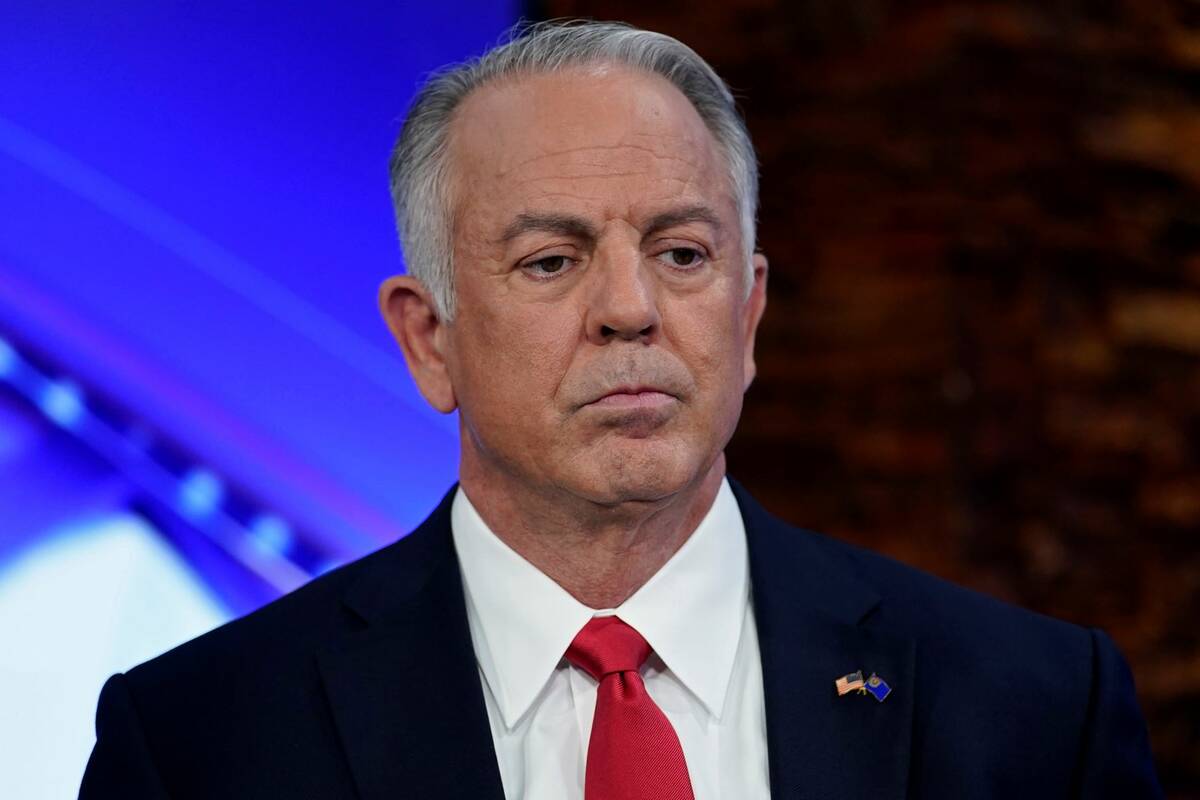 Clark County Sheriff Joe Lombardo endured attacks over his immigration policy from four fellow candidates for governor during a televised debate on Wednesday.

Candidates also discussed school safety in the wake of a deadly shooting at a Texas elementary school and abortion rights during the debate, broadcast by KLAS Channel 8.

Every candidate except Lombardo said they would send Nevada National Guard troops to the U.S.-Mexico border to assist with border security. Lombardo claimed that costs of such an operation would be excessive, citing his law enforcement experience.

Heller and Gilbert attacked Lombardo’s record on immigration as sheriff, claiming that Lombardo made Clark County into a “sanctuary” jurisdiction, which Lombardo vehemently denied. Heller said that Lombardo is “bringing illegal immigrants into the state and spreading them across the state.”

Lombardo defended his record, claiming an ACLU lawsuit has hampered his department’s ability to catch undocumented immigrants and said the federal government is largely to blame for them in Clark County. Lombardo has faced criticism on the campaign trail for his immigration policies, including a quiet deportation policy established after a court ruling led to the end of the Metropolitan Police Department’s partnership with Immigration and Customs Enforcement.

In the wake of the elementary school shooting in Uvalde, Texas, in which 19 students and 2 adults were killed Tuesday, all candidates said they wouldn’t support any additional restrictions on firearms. Instead, they said, the mass shooting problem in this country is a mental health issue. To prevent mass shootings at schools, Gilbert and Nohra said they want more security on school campuses. Lombardo said he supports public-private partnerships to increase mental health resources in education and law enforcement.

As the Supreme Court is expected to overturn the landmark Roe v. Wade decision this summer, which guarantees access to abortion care in the country, all candidates said they were pro-life.

Gilbert was clear, however, that Nevada law currently protects abortion rights, and that Nevadans should choose what any new state policy should be. Lombardo said he would consider more regulation on abortion providers in Nevada.

Heller called both Gilbert and Lombardo “pro-choice” because of their comments — which both denied — and said that his track record on voting for anti-abortion Supreme Court justices while in the Senate shows that he is a “proven conservative.” Heller said he would do “whatever it takes” to overturn Nevada’s current law on abortion, which bans the procedure after 24 weeks. Heller also acknowledged that he supported abortion rights in the past, because he was “more libertarian at the time.”

Lee said he would push to pass a “heartbeat bill” in Nevada, which would ban abortion from the point a heartbeat can be detected in a fetus, which can be as early as six weeks.

“Nevada is a pro-choice state,” Gilbert said. “I would love to see no abortion. But at the end of the day, that’s not what a governor gets to do. … I absolutely would steer Nevada toward a pro-life state.”

Heller, Gilbert and Lee each supported breaking up the Clark County School District into smaller districts to give school leaders and residents more control over their schools. Lee said he wants North Las Vegas to have its own district. He also encouraged competition among school districts and private schools with school choice voucher programs.

Gilbert also lamented the amount of waste he believes is present in Nevada public schools, and said that as governor he would privatize certain public school services in order to free funds to better support teachers.

Inflation and the economy

Candidates agreed that as governor they would put pressure on federal leaders to curb stimulus they believe is causing inflation. Gilbert said he wants to fight Washington, D.C., on economics, calling himself “the Ron DeSantis of the West,” referencing Florida’s governor who has been openly against actions of President Joe Biden’s administration.

Heller emphasized lowering taxes as part of his economic plan. He committed to eliminating gas taxes on fuel sales above $4 per gallon and to reduce the state sales tax equivalent to inflation, about 8 percent.

Lombardo attacked Gov. Steve Sisolak’s shutdowns because of COVID-19, which he and other candidates blamed for rising costs.

“I was the author of the Tax Cuts and Jobs Act (of 2017) when I was back in Washington, D.C., and the purpose of that was to spur economic growth, and it did,” Heller said. “We can do the same thing here in the state of Nevada, which has never been tried … We’re going to spur economic growth like we’ve never seen before.”

As Lake Mead and Lake Powell face all-time low water levels, candidates were asked how they would face the state’s water supply crisis. Heller and Lombardo said they want to renegotiate the Colorado River Compact, which regulates how much water each state along the river can use. They and other candidates claim that California is getting too much water and that Nevada’s share must be increased.

Candidates also proposed investment into new technologies and methods to recover water, like desalination in California. Nohra half-jokingly suggested transporting Mississippi River floodwater to the state. “Let’s give it a try. We’ve got nothing to lose,” he said. For Gilbert, water conservation focuses on irrigation and rural Nevada, which can take advantage of new technology to use less water and save more for cities, he said.

Lombardo doubled down on his support of his former Undersheriff Kevin McMahill, whom he has endorsed to replace him in November. McMahill was accused by a woman of asking her to partially undress for him at a traffic stop in 1995.

“I think this is a ridiculous question,” Lombardo said. “I support Kevin McMahill 100 percent. This is an incident that took place 25 years ago, and he went through the due process associated with that, and he was cleared.”

Gilbert was questioned about his claim that the Oct. 1, 2017, shooting was in some way a cover-up. Gilbert backed down on his claim of a cover-up, but said that as governor he would try to bring more transparency into how the investigation was performed.

Lombardo, who was part of the investigation, lashed back at Gilbert: “For people to impune my officers’ integrity and the investigation associated with that is ridiculous,” Lombardo said. “I stand by them in all aspects of that investigation.”

Lee said he privately condemned racist comments made by the leader of a concealed weapons training seminar, but said he never addressed the issue publicly because “it’s not my job to put him out of business,” he said.

During the hourlong debate, most of the focus was on attacking front-runner Lombardo and incumbent Gov. Steve Sisolak. Heller went on the offensive the most, arguing with Lombardo back and forth multiple times and claiming that Lombardo is “friends” with Sisolak. During his closing remarks, Lombardo derided the attacks of his opponents.

Lombardo declined to take questions after the debate.

The debate was moderated by KLAS-TV, Channel 8 anchor Denise Valdez and reporter Vanessa Murphy as well as Las Vegas Review-Journal government and politics editor Steve Sebelius. The Nevada primary is on June 14, and early voting begins May 28. Read the Review-Journal’s 2022 voter guide here.