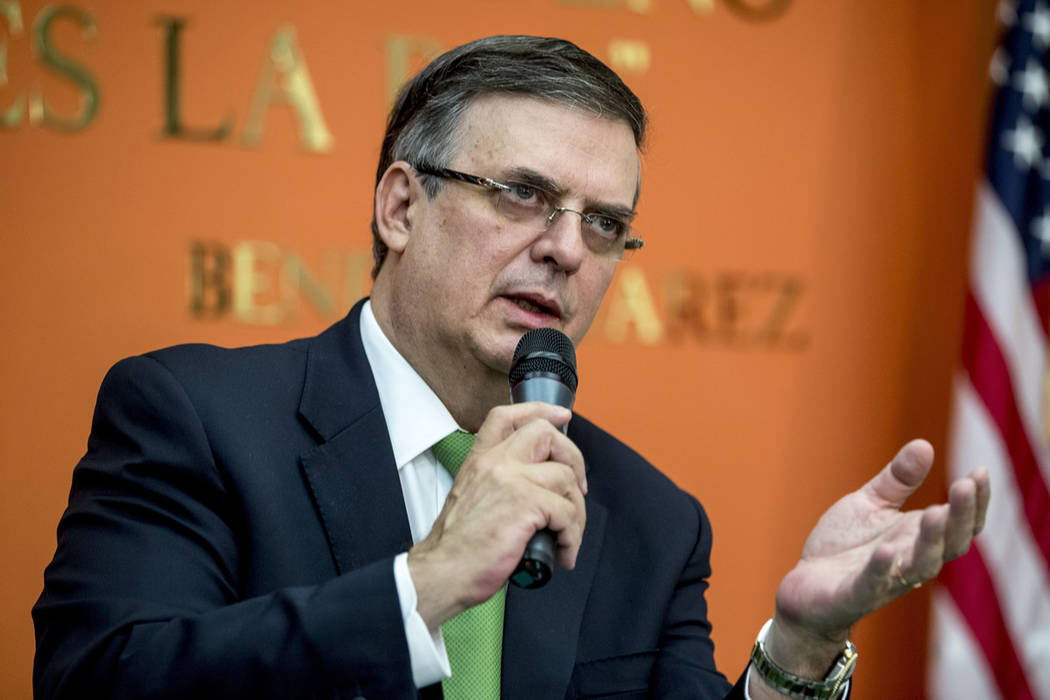 WASHINGTON — The Trump administration worked Tuesday to contain blowback that followed President Donald Trump’s announcement last week of new tariffs on Mexican goods — both from Mexico City and Senate Republicans who openly expressed their hope that the proposed tariffs do not become reality.

Vice President Mike Pence and Secretary of State Mike Pompeo are scheduled to meet Wednesday with Mexican Foreign Minister Marcelo Ebrard as Mexico tries to stave off the 5 percent tariffs slated to begin June 10 and increase 5 percent each month until Oct. 1 when they would hit a ceiling of 25 percent.

But the plan was fighting headwinds in the Senate where some Republicans were weighing their options for stopping it.

“There is not much support for tariffs in my conference, that’s for sure,” Senate Majority Leader Mitch McConnell, R-Ky., told reporters.

Sen. Rob Portman, R-Ohio, told CNBC he thought it “likely” that Congress would vote to stop the emergency power Trump used as the basis for his decision to levy the tariffs unilaterally. For many Republicans, Portman explained, tariffs are “a tax born mostly by consumers.”

Sen. Rand Paul, R-Ky., told CNN there may be enough votes in Congress to override an expected Trump veto. A successful veto vote in the GOP Senate would represent a serious rift between Trump and elected Republicans who have been chary about crossing a president who demands loyalty.

Appearing at a press conference in London with British Prime Minister Theresa May, however, Trump dismissed the notion of Republicans voting against the tariffs as “foolish.”

Noting that Mexico had sent diplomats to Washington to negotiate, Trump added, “I think it’s more likely the tariffs will go on — and we will probably be talking during the time the tariffs are on.”

“Now, frankly, I don’t believe that President Trump will actually go through with the tariffs. When he doesn’t, we should be ready to proceed to these common sense policies instead,” Schumer said from the Senate floor. “President Trump has a habit of talking tough and then retreating.”

Trump responded via Twitter with disbelief that Schumer thought he was bluffing. “But he gave Mexico bad advice, no bluff!” Trump wrote.

Can you imagine Cryin’ Chuck Schumer saying out loud, for all to hear, that I am bluffing with respect to putting Tariffs on Mexico. What a Creep. He would rather have our Country fail with drugs & Immigration than give Republicans a win. But he gave Mexico bad advice, no bluff!

The U.S. Chamber of Commerce estimates that Nevadans would pay $36.8 million more for Mexican goods under a 5 percent tariff, and $184 million if tariffs rose to 25 percent.

If Trump’s proposed tariffs on Mexico reach the 25 percent level, Wayne Winegarden, senior fellow in Business and Economics at the Pacific Research Institute, said “you’re talking about enough to put us into a recession.”

According to the D.C.-based Tax Foundation, if all the tariffs announced by the Trump administration were fully imposed, U.S. GDP would fall “by 0.79 percent ($196.66 billion) in the long run, effectively offsetting about half of the long-run impact of the Tax Cuts and Jobs Act. Wages would fall by 0.51 percent and employment would fall by 609,644 full-time equivalent jobs.”

“If we get 5 percent (tariffs), you’re going to have a slight impact,” Winegarden predicted. But if tariffs continue to increase to the 25 percent ceiling, “you’ll see a bigger and bigger impact.”

At a forum at The Wilson Center’s Mexico Institute, advisory board member Carlos Heredia warned that Trump was pressuring Mexico to do the “unachievable” — curb migration from other countries. Even if the tariff decision is postponed, he said, the threat alone will linger over Mexico and the “damage to the economy is going to be very high.”

Sarukhan objected to Trump’s use of tariffs to win a concession on immigration, a matter unrelated to commerce. If the administration imposes the tariffs starting Monday, Sarukhan said, Mexican President Andres Manuel Lopez Obrador should respond with “a carousel of countervailing duties.”

Sarukhan said he believes these tariffs could kill the chances of the the U.S.-Mexico-Canada pact to modify the North American Free Trade Agreement.

House Speaker Nancy Pelosi, D-Calif., who warned last week that Trump’s announcement endangered ratification of the trade pact, and other House Democratic leaders met with Ebrard on Tuesday. A spokesman told the Review-Journal, “Members discussed the need to address the root causes of Central American migration humanely, and Democrats’ opposition to the uncertainty and chaos created by President Trump’s reckless decision to tie across the board tariffs to his radical anti-immigrant agenda.”