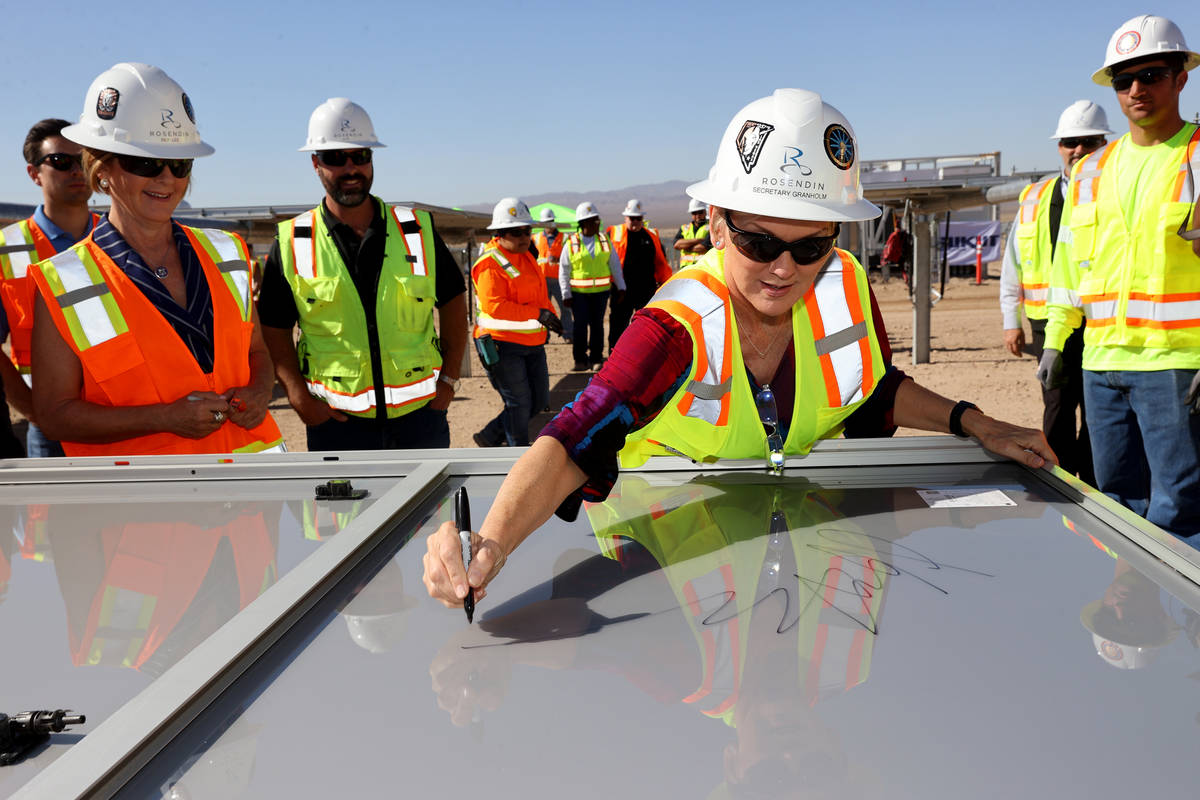 Granholm headed a Department of Energy roundtable to discuss the National Blueprint for Lithium Batteries 2021-2030 with representatives from private sector businesses involved in the critical mineral supply chain for manufacturers who produce smartphones, computers and cars.

President Joe Biden has set a goal of reducing fossil fuel emissions by 50 percent in a decade and zero emissions by 2050.

“We will not be able to accomplish these goals without lithium batteries,” Granholm said.

Joseph Mendelson, a senior counsel at Tesla, said securing supplies of lithium to build batteries for electric cars was critical to compete globally.

He said China is “ahead of the game” because of incentives, standards and the supply of critical minerals to produce batteries and energy storage systems. Tesla has a lithium battery plant at the Tahoe Reno Industrial Center; batteries produced there are installed in cars and trucks made in California, where other parts are built and assembled.

JB Straubel, co-founder and CEO of Redwood Materials in Carson City, said his company strips batteries out of electronic waste to recycle lithium and electrical waste.

All of the business representatives who participated in the roundtable appeared to be in agreement with Granholm, who said extraction and refining lithium was critical to stay competitive with China, which has control over much of the supply chain for clean energy technology.

Nevada is the only state with a large commercial lithium mine in the United States — Silver Peak, which opened in the 1960s in Esmeralda County. But two proposed mines in Northern Nevada face opposition from American Indian tribes and environmentalists.

The Biden administration has agreed to protect habitat for Tiehm’s buckwheat, a rare flower found on 10 acres in Esmeralda County. The Rhyolite Ridge lithium mine, proposed by an Australian mining company, would be on the same public land as the Tiehm’s buckwheat.

“Tiehm’s buckwheat shouldn’t be wiped off the face of the Earth by an open-pit mine,” said Patrick Donnelly, Nevada director for the Center for Biological Diversity, in a statement about the administration’s decision to protect the flower under the Endangered Species Act.

Conservationists praised the Biden administration for providing protections for the flower, whose global habitat is just 10 acres in Nevada.

Environmental impact and tribal concerns have spurred protests over the Thacker Pass lithium mine in Humboldt County.

The Fort McDermitt Paiute and Shoshone Tribe and ranchers said the mine would curb access to hunting, fishing, water sources and sacred sites. Protests have occurred at the site, and in Reno, in recent months.

Because lithium is a finite resource, and critical to clean energy goals, Granholm said the Departments of Defense, State and Commerce, as well as Energy, are developing a strategy to shore up domestic battery production and domestic supply chain.