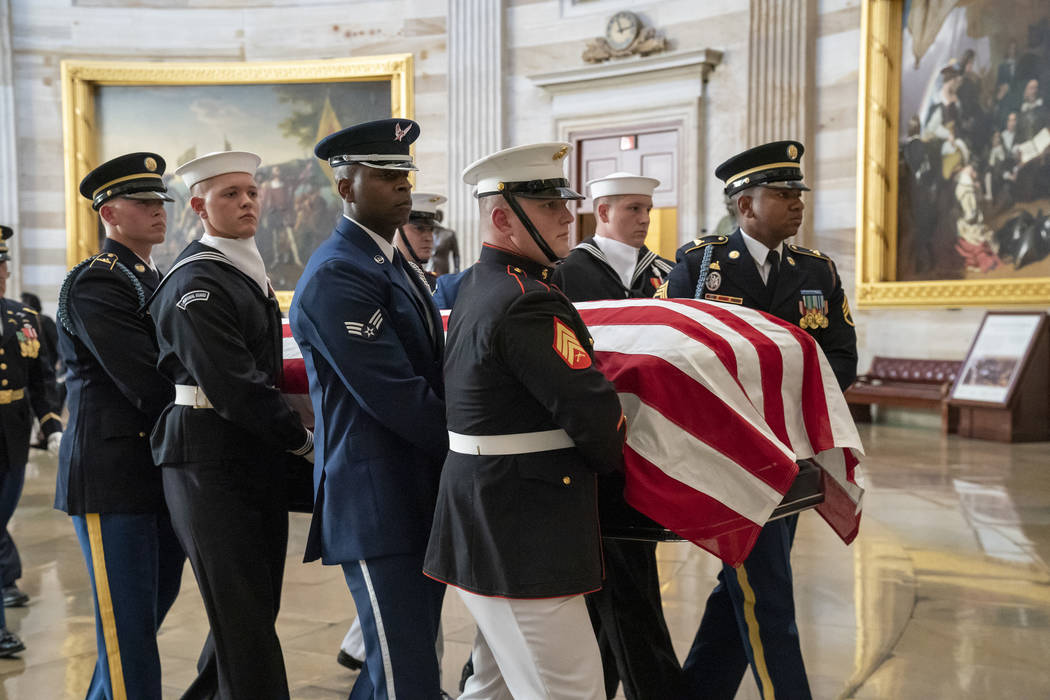 The late Maryland Rep. Elijah Cummings is carried through the Rotunda of the Capitol to lie in state at the Capitol in Washington, Thursday, Oct. 24, 2019. The Maryland congressman and civil rights champion died Thursday, Oct. 17, at age 68 of complications from long-standing health issues. (AP Photo/J. Scott Applewhite) 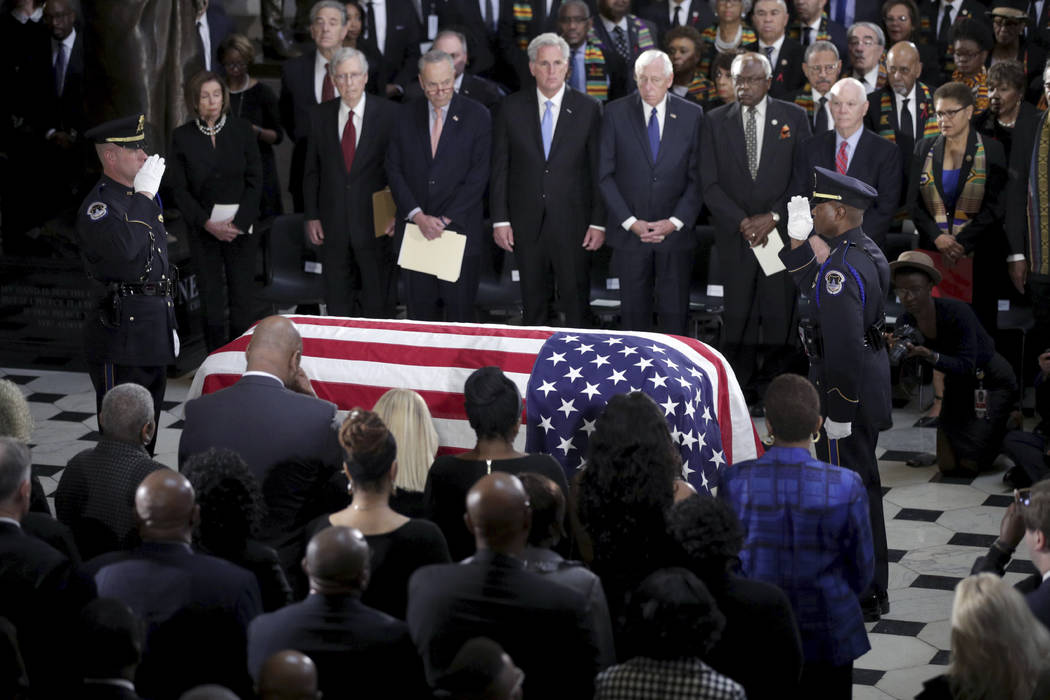 The flag-draped casket of Rep. Elijah Cummings, D-Md., lies in state at the Capitol, Thursday, Oct. 24, 2019 in Washington. (Alex Wong/Pool via AP) 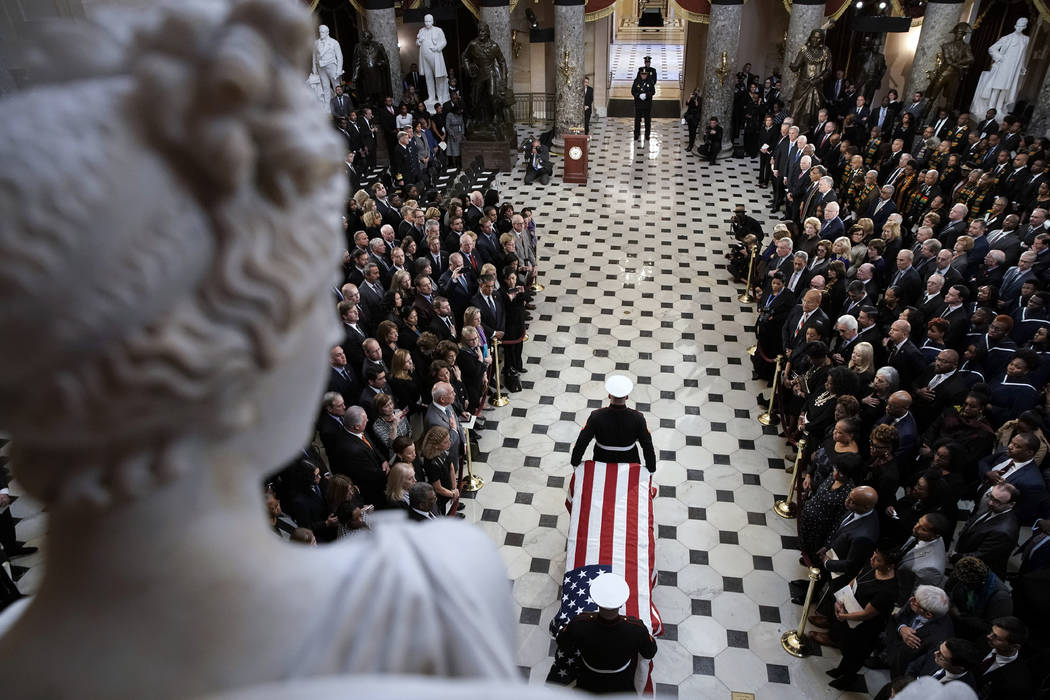 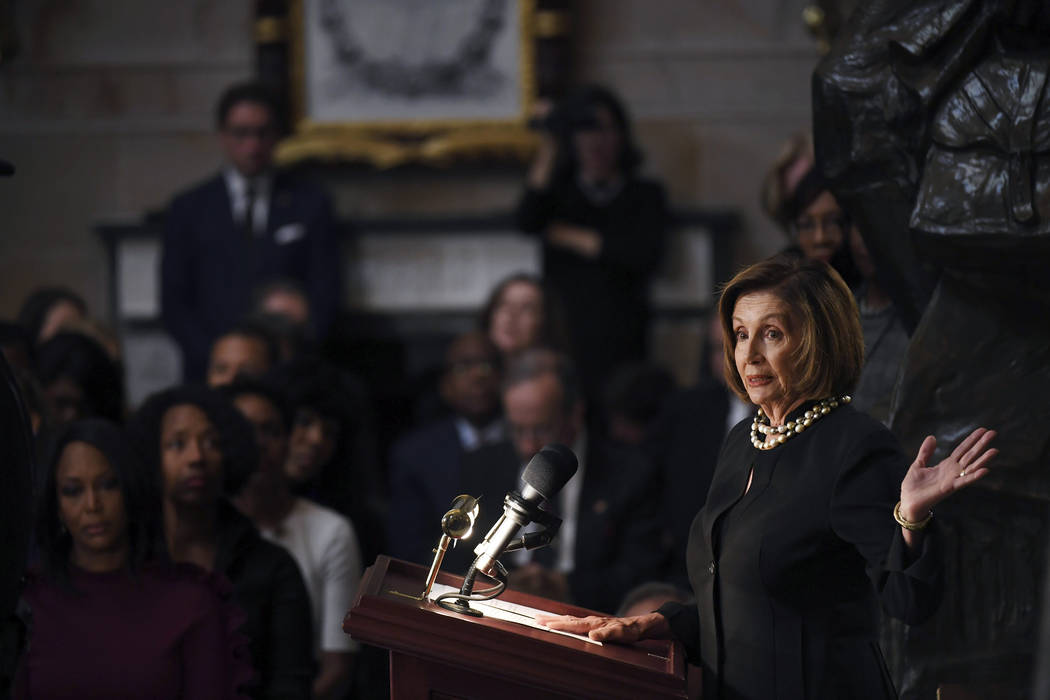 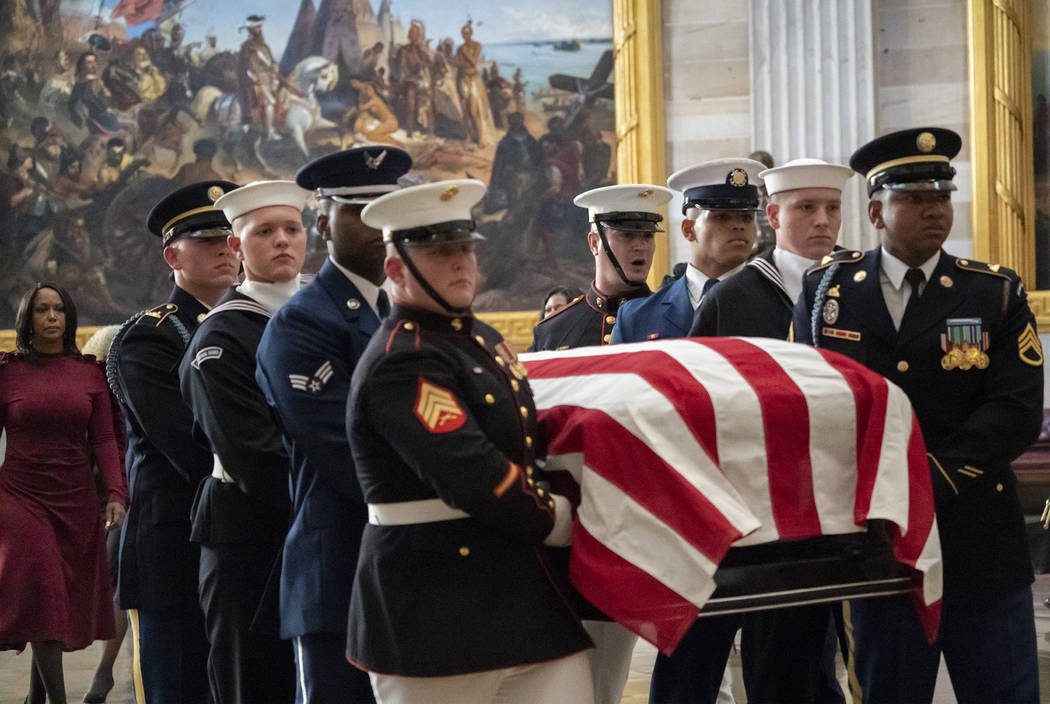 The late Maryland Rep. Elijah Cummings is carried through the Rotunda of the Capitol to lie in state at the Capitol in Washington,Thursday, Oct. 24, 2019. Following at far left is his widow, Maya Rockeymoore. The Maryland congressman and civil rights champion died Thursday, Oct. 17, at age 68 of complications from long-standing health issues. (Michael Reynolds/Pool via AP). (AP Photo/J. Scott Applewhite)

WASHINGTON — The late Rep. Elijah Cummings was hailed as the “North Star” for fellow House Democrats as congressional leaders and colleagues paid tribute to him at a Capitol ceremony Thursday.

House Speaker Nancy Pelosi, D-Calif., a close personal and political ally, said that not only was Cummings a guiding light, “Elijah was truly a master of the House.”

By day, Cummings was at the Capitol in the halls of power, McConnell said, but at night he returned to Baltimore to encourage unity.

House Majority Leader Steny Hoyer, D-Md., said that like Cummings’ namesake, the Prophet Elijah, the congressman “saw wrongdoing and spent his life working to banish it from our land.”

Hoyer also recalled the 2015 Baltimore protests and said Cummings was “a calming influence in a sea of rage.”

A sharecropper’s son, Cummings rose to become a civil rights champion and chairman of the House Oversight and Reform Committee, where he was a leader of an impeachment inquiry of President Donald Trump.

‘We are better than this’

Hoyer and other speakers remembered a frequent Cummings lament when events went awry or politicians acted badly: “We are better than this,” Cummings would thunder to all who would listen.

Rep. Karen Bass, D-Calif., chairwoman of the Congressional Black Caucus, said Cummings was respected and revered in the caucus, “a quiet giant” whose words were heeded.

“He pulled no punches. He was authentic to the core and a champion of our democracy,” Bass said.

Rep. Mark Meadows, a North Carolina Republican who frequently sparred with Cummings on the Oversight and Reform Committee, called Cummings a close friend whose “smile would consume his whole face.”

But Cummings “also had eyes that would pierce through anybody that was standing in his way,” Meadows recalled. Bowing his head, Meadows sad he was blessed to know Cummings, adding: “Perhaps this place and this country would be better served with a few more unexpected friendships.”

The public was to have the chance to pay respects to Cummings later Thursday in Statuary Hall. Cummings is just the third African American to lie in honor at the Capitol and the first black lawmaker.

A wake and funeral are planned Friday in Baltimore.

As a tribute to Cummings, no votes were scheduled Thursday in the House.