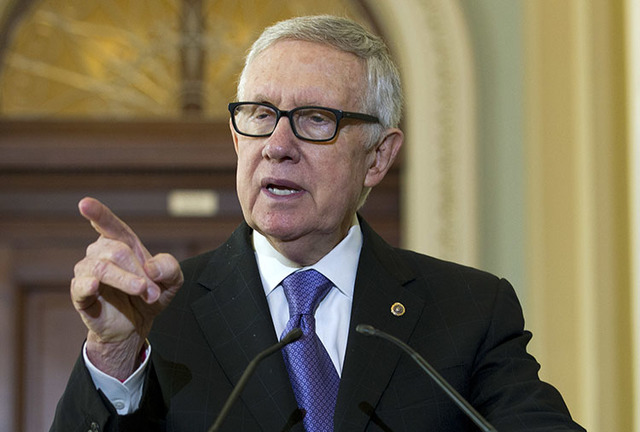 Comey said Friday that the bureau discovered the emails in an unrelated case — an investigation of illicit text messages from Anthony Weiner, the estranged husband of Clinton aide Huma Abedin, to a 15-year-old girl in North Carolina. The discovery, Comey said, prompted the bureau to revisit its previously closed investigation of Clinton’s use of a private email server while she was secretary of state.

In an open letter sent to news organizations, Reid, D-Nev., suggested that Comey had handled sensitive information insensitively with “what appears to be a clear intent to aid one political party over another.”

“I am writing to inform you that my office has determined that these actions may violate the Hatch Act, which bars FBI officials from using their official authority to influence an election,” Reid wrote.

Reid also suggested what Comey found may be irrelevant to the bureau’s investigation.

Meanwhile, Reid accused Comey of failing to release “explosive information” about ties between Republican presidential nominee Donald Trump, his aides and the Russian government, which he called “a foreign interest openly hostile to the United States.” Reid didn’t detail the information.

The Obama administration has accused Russia of hacking the computers of U.S. political groups, particularly the Democratic National Committee.

Former White House ethics lawyer Richard Painter wrote in a New York Times op-ed Sunday that he filed a Hatch Act complaint with the Office of Special Counsel and Office of Government Ethics. Painter, a professor at the University of Minnesota Law School, was chief ethics lawyer in the George W. Bush White House from 2005 to 2007.

“I do not think he has committed a crime,” he told the Post, referring to the latest email investigation. “(But) I do think he has abused his office.”

“Harry Reid is a disgrace to American politics, among worst men ever in Senate,” Cotton tweeted. “He can’t go soon enough, &many Democrats privately agree.”