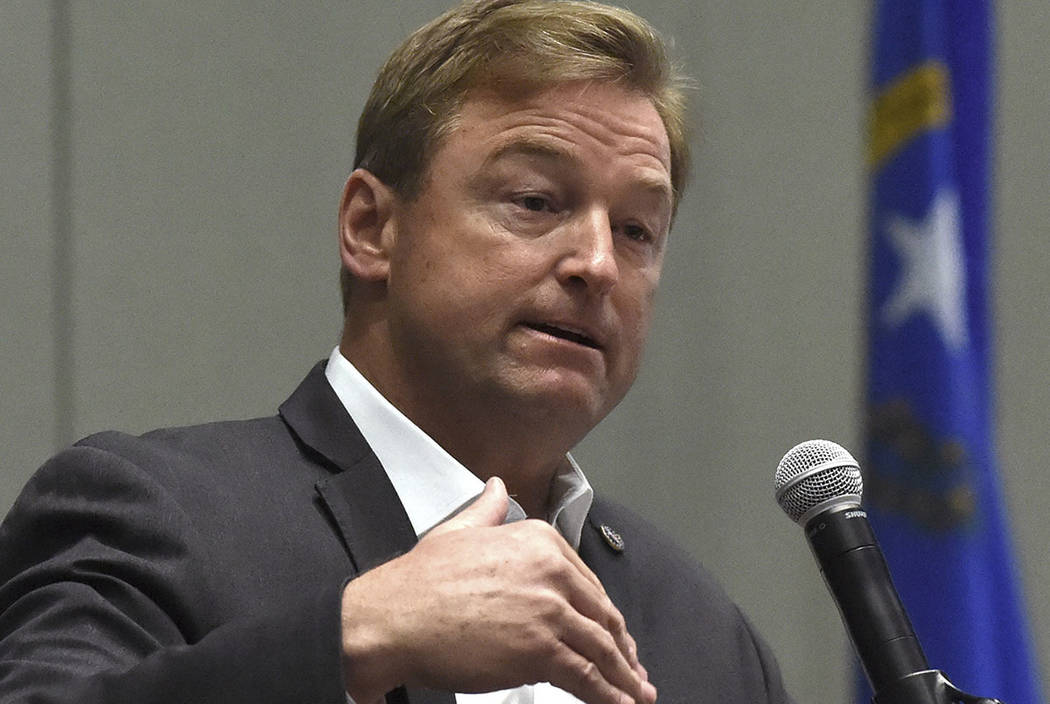 With the health care debate again heating up, incumbent U.S. Sen. Dean Heller has become the central target of a major ad blitz in Nevada.

The Progressive Change Campaign Committee launched a 30-second ad last week playing on cable news networks across Nevada that urges Heller, R-Nev., to oppose the revived push to repeal the Affordable Care Act. The group plans to have the ad air through early this week.

The ad features a woman named Micah from Lavalette, West Virginia, who relies on Medicaid to treat her cerebral palsy and seizures.

“Because of her cerebral palsy, she’s needed constant care for the last 38 years. When I hear that President Trump and Senate Republicans want to cut her Medicaid, I just want to cry,” Micah’s mother, Priscilla says in the ad. “I can’t afford Micah’s care if this bill passes. Without it, my daughter could die from seizures.”

Heller, who opposed an earlier repeal bill because of cuts to Medicaid, is helping push the latest repeal effort with fellow Sens. Lindsey Graham, R-S.C., and Bill Cassidy, R-La. Heller says the bill would put Medicaid funding into block grants that would lead to increased federal spending for Nevada.

But the Kaiser Family Foundation estimates that under the Republican effort Nevada would see a reduction of $870 million in federal funds between 2020 and 2026.

Weiss, a 35-year-old Democrat who works in information technologies, says he supports Medicare for all and net neutrality, wants to end the federal prohibition on marijuana and protect Social Security.

Weiss said he was a Nevada state delegate for Bernie Sanders in 2016, and worked on President Barack Obama’s campaign 2008 campaign in Florida. He has a bachelor’s degree from UNLV and a master’s in sociology from the University of Miami.

Weiss was diagnosed with Asperger’s syndrome in his late 20s, and said he’s “very aware of what it’s like to be stigmatized.”

“There’s a lot of misinformation out there. There’s a lack of understanding about what the spectrum encompasses,” he said. “I don’t meet what is the stereotype of what autism is.”

Who’s in this week? Nelson Araujo, a Democratic Assemblyman from Las Vegas, launched his campaign for secretary of state.

Who’s Out? State Sen. Pat Spearman, D-North Las Vegas, bowed out of running for secretary of state and endorsed Araujo.

Three-term Assemblyman Paul Anderson, R-Las Vegas, resigned his District 13 seat on Friday to take a position with the Governor’s Office of Economic Development.

Former Assemblyman Andrew Martin, D-Las Vegas, is mulling a run for treasurer. But Martin last week told the Las Vegas Review-Journal he’s also considering running for state Senate in District 8. Independent Patricia Farley has said she will not run for re-election. Martin, a certified public accountant by trade, most recently ran for Nevada controller in 2014, but lost to Republican Ron Knecht.