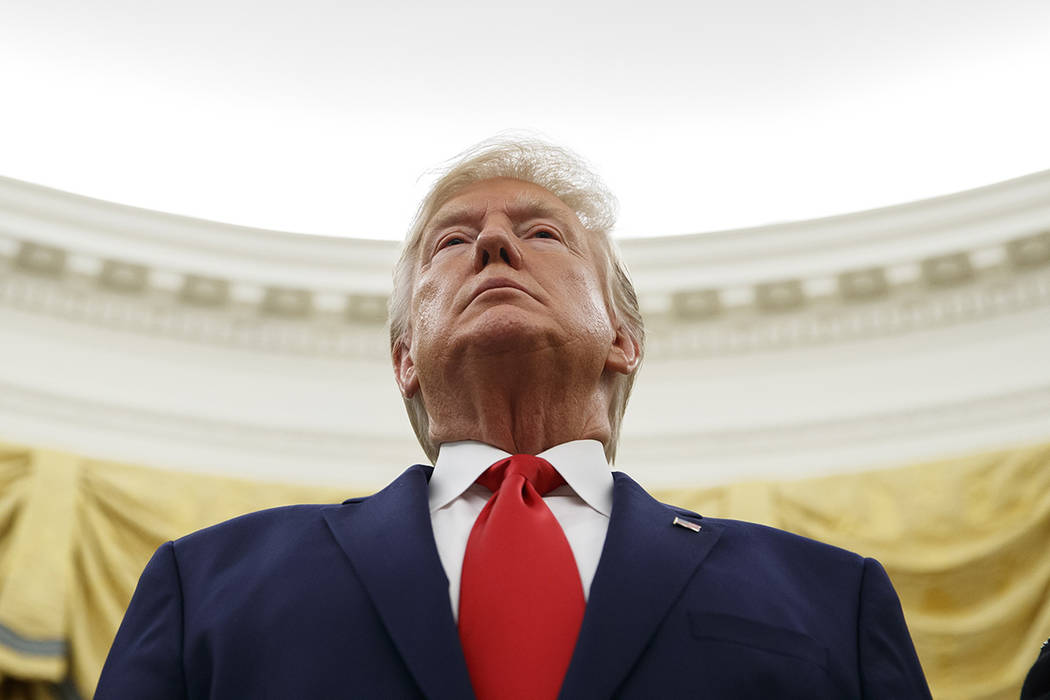 WASHINGTON — “Investigate the investigators,” President Donald Trump told reporters before he boarded Marine One on Friday.

The president was answering questions about news the Department of Justice had opened a criminal investigation into the genesis of its probe into Russian meddling in the 2016 election.

Trump has long maintained that the federal probe was a “witch hunt” sparked by a dodgy “dossier” that tied Trump to Russia and was launched by hostile officials bent on overturning his surprise 2016 victory.

The so-called dossier was written by a former British intelligence officer who was bankrolled by Hillary Clinton’s 2016 campaign and the Democratic National Committee.

“I completely sympathize with those that say (officials) shouldn’t have used this document” to get a wiretap warrant, University of Virginia law professor Saikrishna Prakash observed. But, he added, “I still don’t know if it’s a crime.”

In May, Attorney General William Barr appointed Connecticut U.S. Attorney John Durham to look into whether actions taken by federal officials probing allegations that Russian actors worked with the 2016 Trump campaign were “lawful and appropriate.”

The latest development, first reported in the New York Times, allows Durham to issue subpoenas for witness testimony, convene a grand jury and file criminal charges if he so chooses.

Democrats charged that Trump had managed to turn the Department of Justice into “a vehicle for President Trump’s political revenge,” as House Judiciary Committee Chairman Jerry Nadler and House Intelligence Committee Chairman Adam Schiff charged in a statement.

“If the Department of Justice may be used as a tool of political retribution, or to help the president with a political narrative for the next election, the rule of law will suffer new and irreparable damage,” Nadler and Schiff continued.

But Tom Fitton of the conservative group Judicial Watch told the Review-Journal that he considers Schiff “one of the malicious actors here.”

“Someone like Schiff has a personal interest in this. He was a key figure in manufacturing this Russia-gate,” Fitton said.

The dossier that was used to get a FISA warrant against Trump campaign adviser Carter Page, Fitton argued, was “obviously ‘garbage’” and never should have been the basis for a serious investigation, he said. Fitton said he suspects the intelligence community never had genuine evidence of a conspiracy between Russia and Trump.

Former CIA spokesman Bill Harlow found it “unlikely that anyone at the FBI or CIA or (Director of National Intelligence’s) office engaged in criminal conduct.”

Harlow offered that he sees the Barr-ordered probe as an attempt to change the subject. “They’re desperate to find something to hang this on to make it sound like some conspiracy, just like they were desperate to get the Ukrainians to investigate the Bidens,” he said.

During a July 25 conversation with Ukrainian President Volodymyr Zelenskiy, Trump suggested that the eastern European nation investigate former Vice President Joe Biden’s threat to withhold loan guarantees if Zelenskiy’s predecessor did not fire a prosecutor who had investigated a Ukrainian natural gas company that paid Biden’s son Hunter $50,000 per month.

That conversation is the focus of the House impeachment inquiry.

Rep. John Ratcliffe, R-Texas, told Fox News he believes the expansion of the Durham portfolio is connected to a report by the Department of Justice inspector general into wiretap application abuses by the FBI. But with the Justice Department and the inspector general maintaining silence, there is no way to know if he is correct.

“I think it would be surprising if he didn’t learn anything from the IG report,” Prakash said.

As for those who see the Durham probe as too political, Prakash asked if it’s OK for Special Counsel Robert Mueller to investigate and prosecute the president’s associates, how could it be wrong for the Department of Justice to judge whether someone committed a crime?

Those who try to paint Durham as a partisan prosecutor will have to contend with his impressive resume and bipartisan reputation. When Trump appointed Durham U.S. attorney in November 2017, Connecticut’s two Democratic senators, Richard Blumenthal and Chris Murphy, said he was “a fierce, fair prosecutor.” Durham was confirmed unanimously.

In 1999, Attorney General Janet Reno picked Durham to look into ties between the late mob boss James “Whitey” Bulger, the brother of a prominent state Democratic politician, and the FBI. Agent John Connolly went to prison for protecting Bulger.

Attorneys General Michael Mukasey and Eric Holder, who served under Presidents George W. Bush and Barack Obama, picked Durham to investigate the destruction of CIA interrogation tapes and techniques. After both probes, no criminal charges were filed.

While many Trump supporters believe authorities behind the Russia probe broke the law, Fitton is skeptical that prosecutions are imminent.

If Durham does have a serious case against anyone, Fitton said, “you’ll see Mueller-like activity” and “screams from targets” as witnesses are called before a grand jury. That has not happened to date, he said, adding “it’s too late and the swamp is strong.”

Prakash said Durham need not limit charges to offenses related to the Russian probe. He could charge individuals for making false statements and “it doesn’t even need to be about the original investigation,” he said.