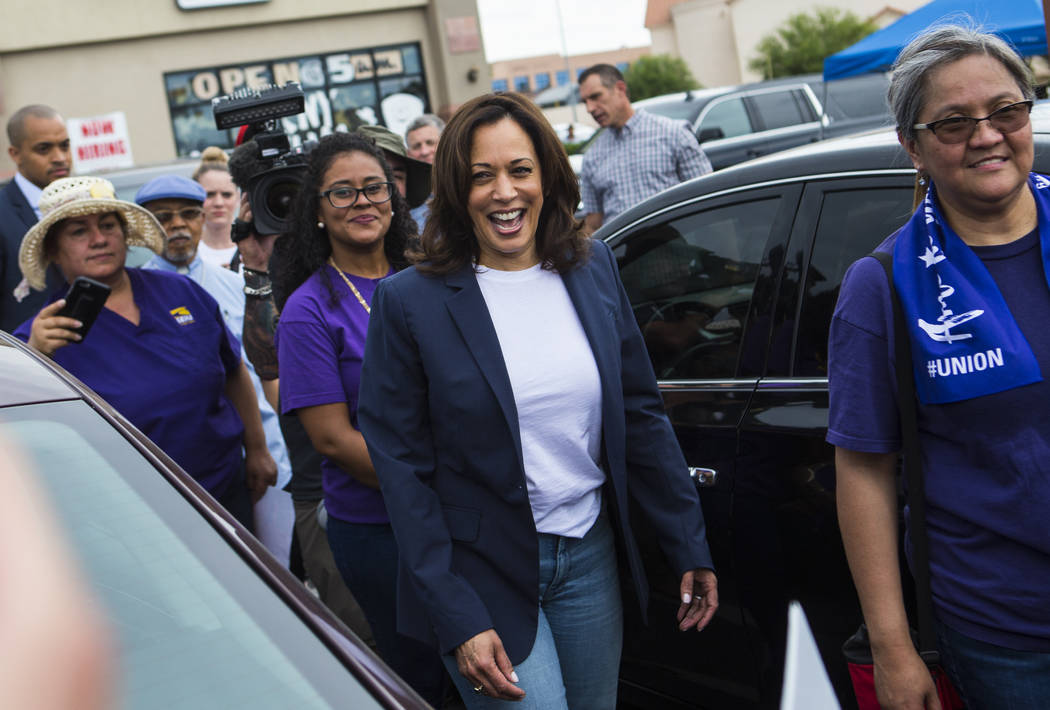 As U.S. Sen. and 2020 Democratic candidate Kamala Harris spoke to the 300 people assembled at Doolittle Community Center on Saturday morning, Donna Olufsen listened. At times, she even cheered.

“She was amazing,” Olufsen said. “She touched on every subject I am interested in. My heart leapt.”

Olufsen, a 63-year-old retired real estate agent, said Harris’ views on health care as a universal right resonated on a personal level. The senator from California spoke at length about caring for her mother, who had Medicare when she passed away from cancer, saying she could not imagine going through the grief and immense day-to-day stress while also having to worry about medical bills.

“I lost my son (30-year-old Aaron) six years ago because he did not have insurance,” Olufsen said. “If he had had access to insurance, he would still be alive today. We are the only major country in the world without national health care.”

On the second day of her latest Las Vegas swing, Harris kept mostly to her campaign talking points at the public event: promises for executive action on gun control and immigration, a $15 minimum wage, a $13,500 raise for teachers and a denouncement of President Donald Trump’s ties to foreign powers in Russia, North Korea and Saudi Arabia.

The overall theme of Harris’ pitch focuses on telling the truth about guns, climate change, racism and economic inequality while strongly implying the president lies about such issues.

Harris, one of three African-Americans in the crowded 2020 Democratic field, deviated from her Friday speeches to tell the crowd gathered in a predominantly black part of Las Vegas that no parent should have to give their young son “the talk,” which she described as a discussion about how the boy will be stopped and otherwise targeted by law enforcement for no other reason than the color of their skin.

Harris did not take questions from the large crowd, but she stayed afterward to pose for photos and speak with a few dozen people gathered in front of the stage.

One of those people was Byron Taylor, a U.S. Marine Corps veteran who served in Afghanistan and elsewhere during his 12-year career. Taylor, who uses a wheelchair because of back and knee injuries, said he discussed possible improvements that could be made to the U.S. Department of Veterans Affairs.

Taylor said he sometimes sells his plasma to make ends meet during times in which the VA is lagging on his paperwork.

“She said we would talk in-depth about it soon,” Taylor said. “I don’t agree with her on 100 percent of her platforms, but I agree with most of what she says. She caught my eye during the (U.S. Supreme Court Associate Justice) Brett Kavanaugh hearings.”