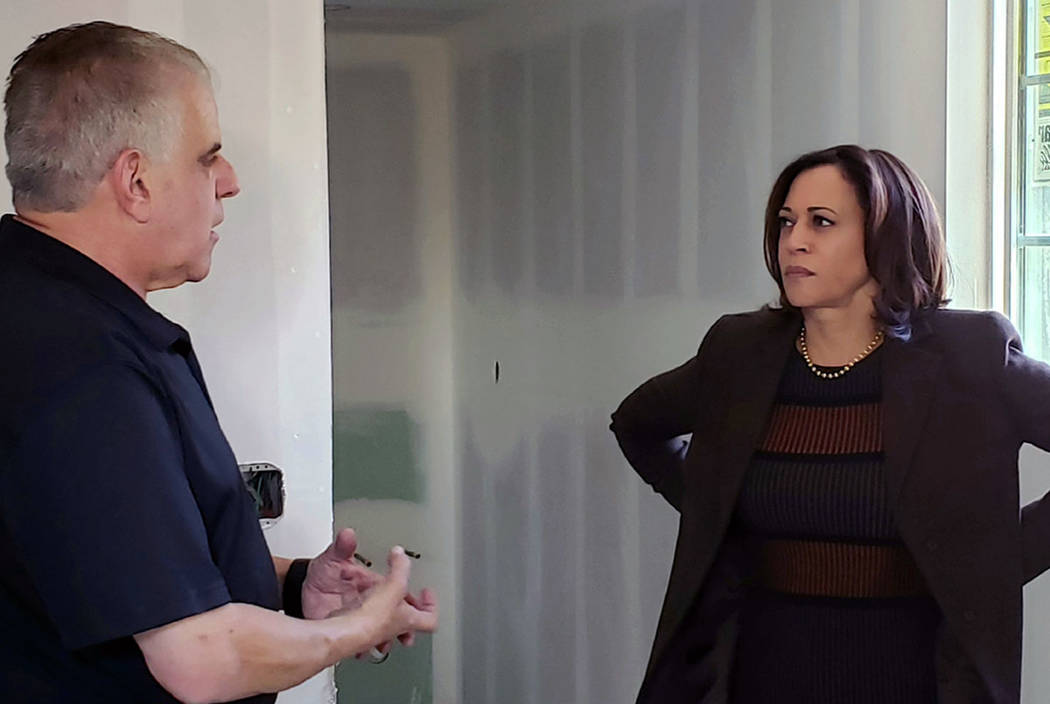 Sen. Kamala Harris toured Veterans Village 2 on Saturday as her presidential campaign moved through Las Vegas, saying the village does “some of the best work in the nation around what we need to do to address (homeless veterans’) needs.”

In an interview with the Review-Journal, Harris, D-Calif., also discussed her strategy to fight homelessness and again voiced her opposition to the city’s recent camping ban. She detailed her newly unveiled plan to help rural Nevadans and attempted to maneuver around reports that she is shifting staff from Nevada and other early states into Iowa.

Harris’ stop was the latest in a series of Democratic presidential hopefuls touring the Veterans Village locations.

She spoke to a handful of veteran tenants, promising to deliver bold reforms both through the Veterans Affairs system and other means.

“Too often ‘thank you for your service’ is the beginning and the end of the conversation when talking to veterans in this country,” Harris said.

Speaking to the Review-Journal, Harris said the country has failed its veterans by not providing enough resources to the VA, substance abuse counseling and mental health care.

She pledged $135 billion in new funding to tackle the greater sphere of homelessness — from those who may be “couch surfing” due to sudden financial hardship to the chronically homeless — as well as affordable housing.

On the issue of chronic homelessness, Harris denounced a recent Las Vegas ordinance that allows for those sleeping outdoors to be charged with a misdemeanor if they refuse to move or seek services. She said that her experience as a prosecutor has taught her that criminalizing a “societal ill” when better options, such as expanding health-related services and housing, are available is not the answer.

“I appreciate the frustration that everyone has with the issue, but we can’t criminalize — we can’t prosecute our way out of homelessness,” Harris said.

She noted that only 13 health care facilities cater to most of the state’s rural population, adding that these health care deserts mean “some women have to drive 50 miles to give birth.” Harris’ proposal would provide incentives, including total student loan debt forgiveness, for providers willing to work in high-need areas.

Harris also pledged $80 billion to ensure broadband internet in every household by 2024. She said the need in rural areas is similar to the need for electricity in the 1930s, when the government invested in similar infrastructure.

When asked if she would be moving Nevada staff into Iowa, Harris said she loved and cared deeply about Nevada. She noted she has worked with the state on issues such as the foreclosure crisis and national legislation, and campaigned for its Democratic candidates.

She pledged to continue to “give resources” and visit Nevada, but she did not explicitly deny the reports.

“To win, I’ve got to focus right now on putting resources into Iowa,” Harris said. “So that by the time that I come to Nevada for the caucuses, I can give Nevada everything I’ve got.”