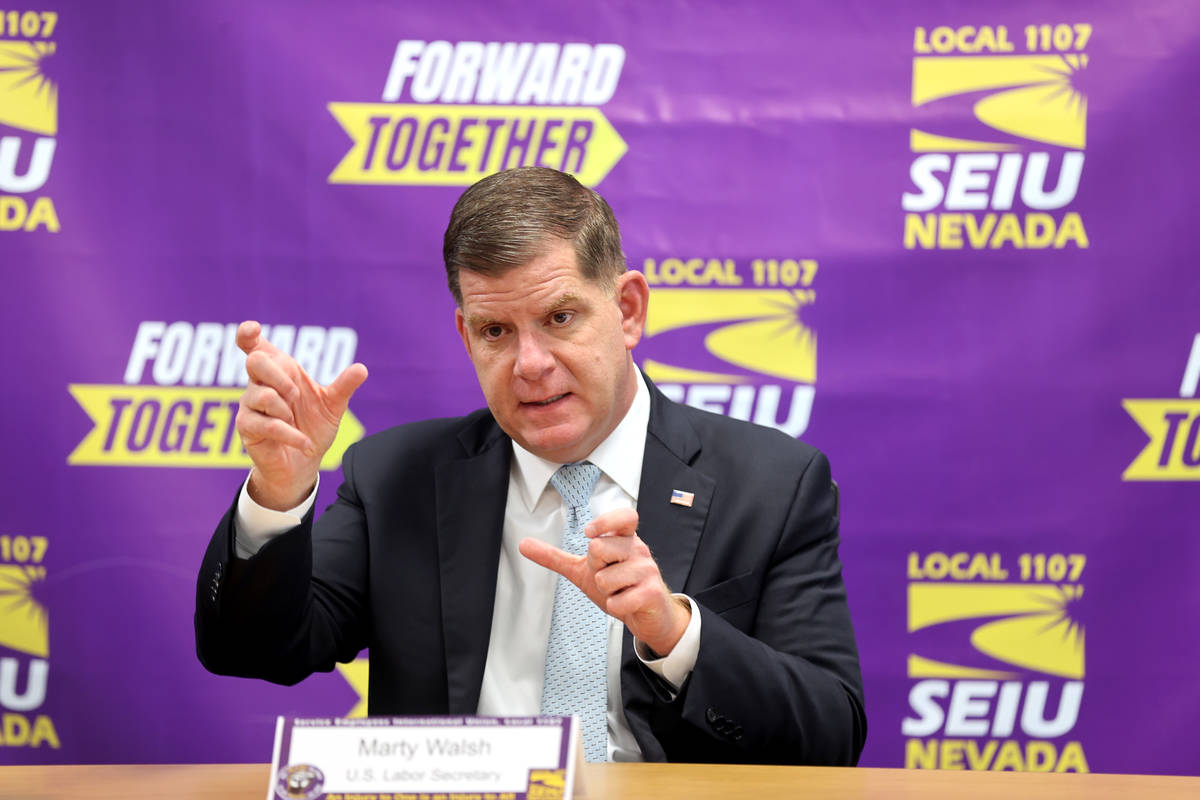 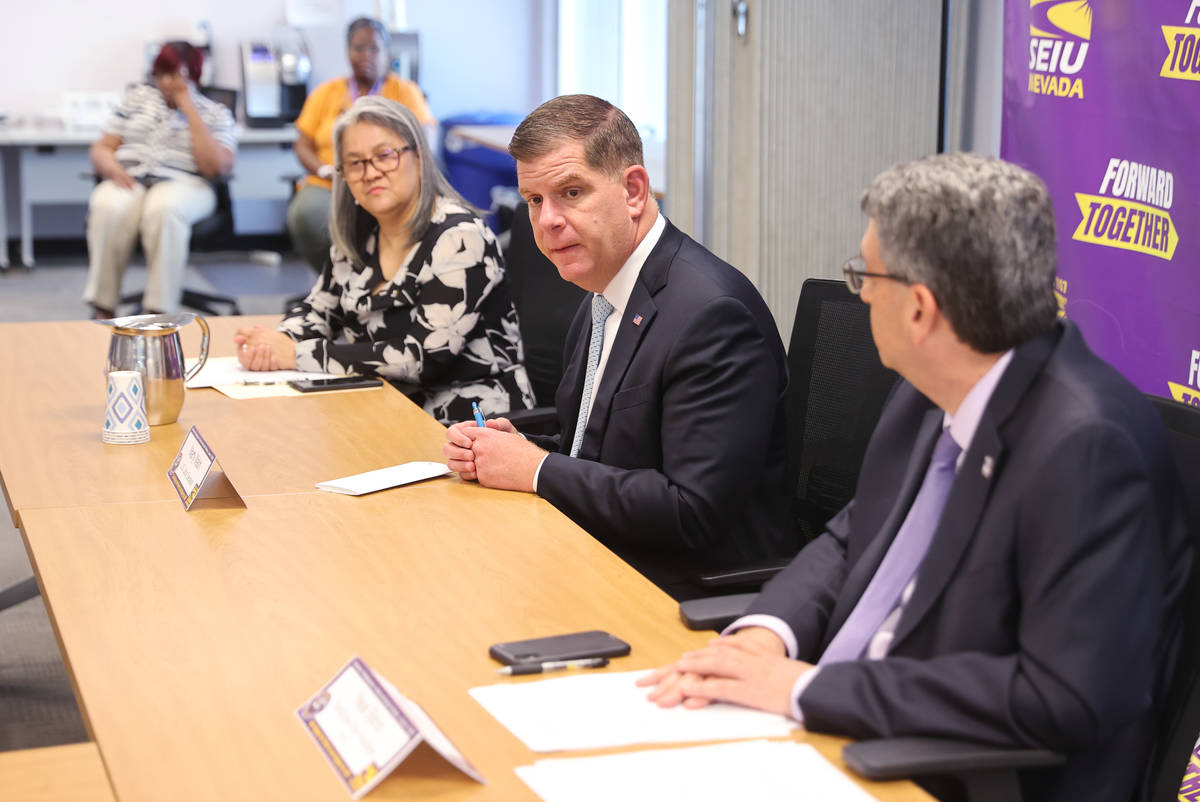 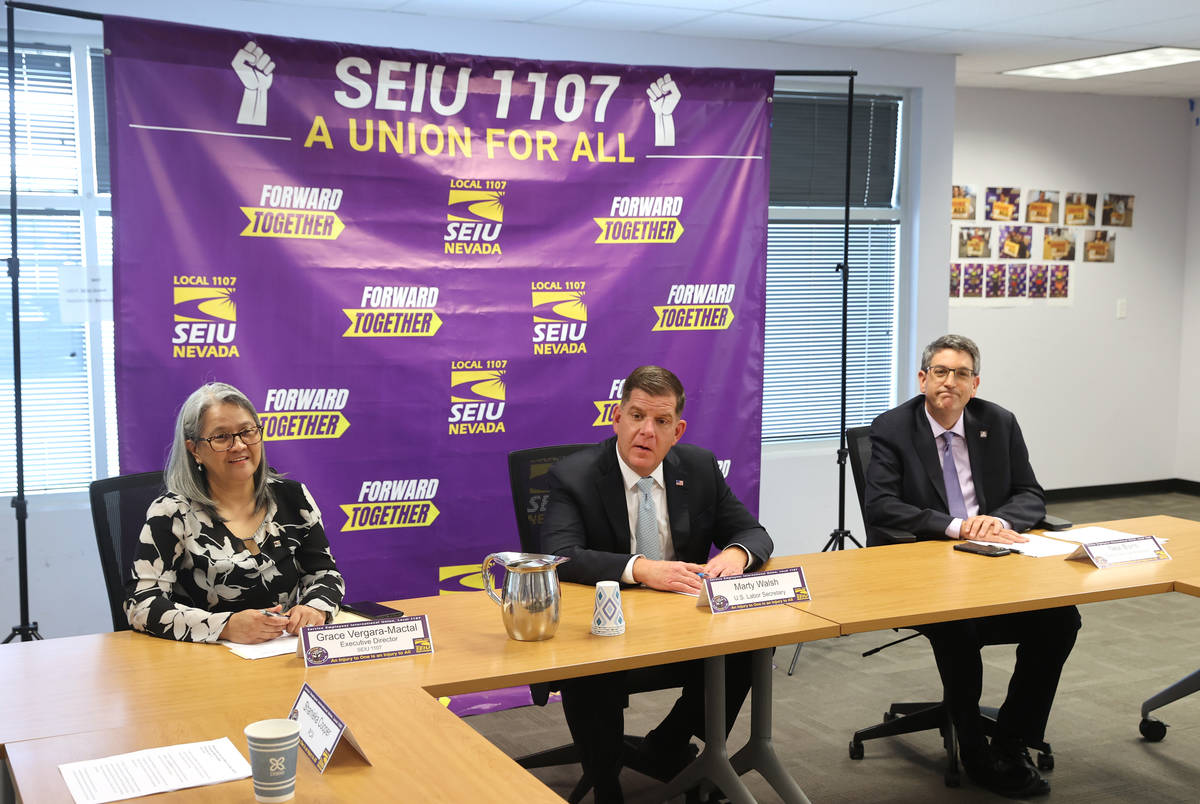 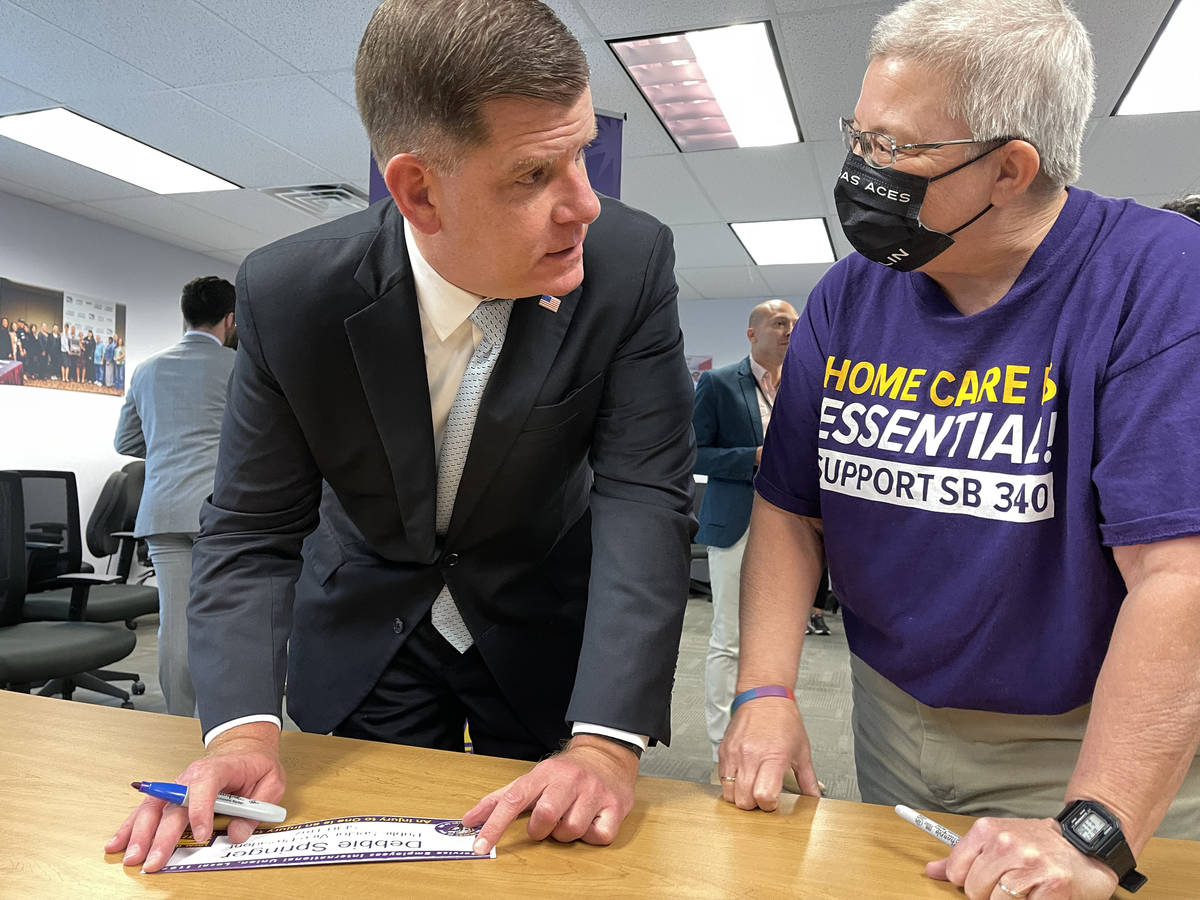 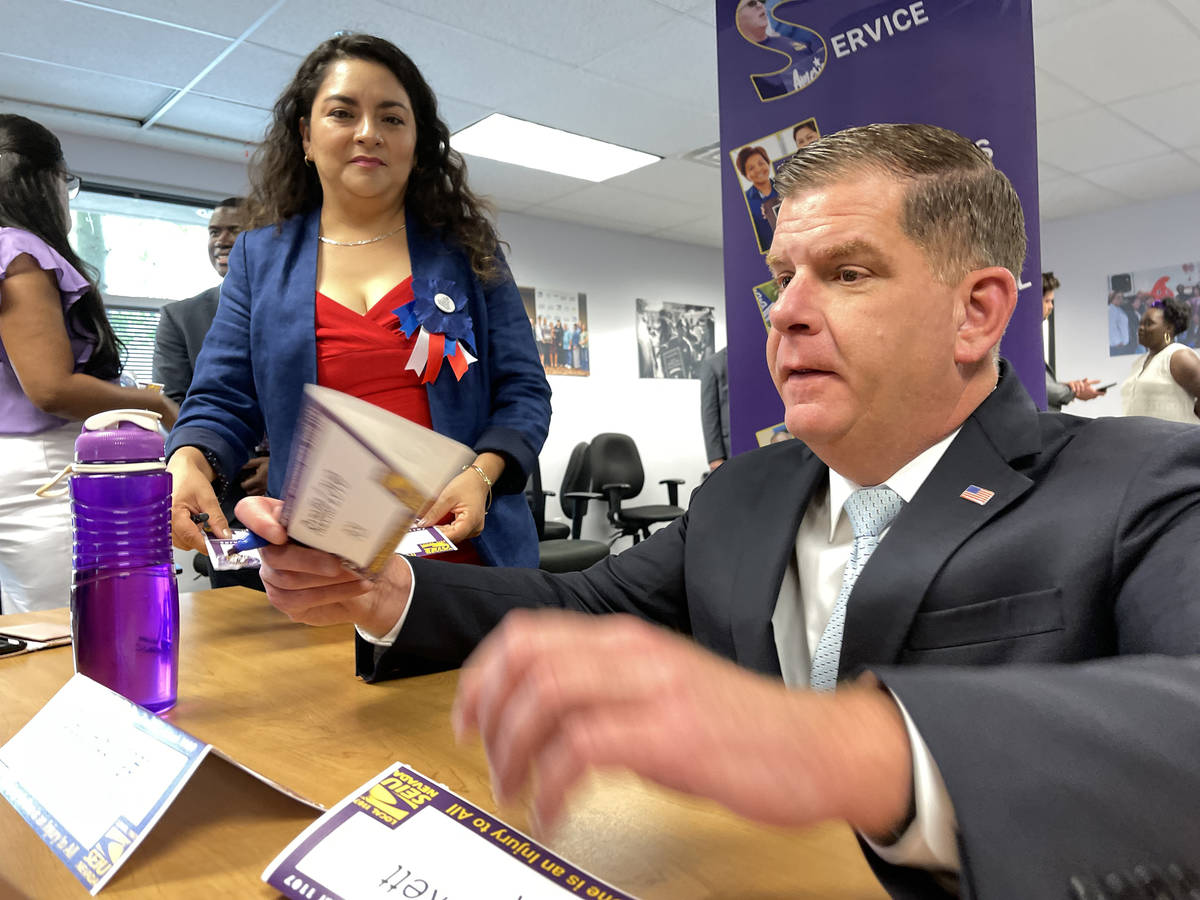 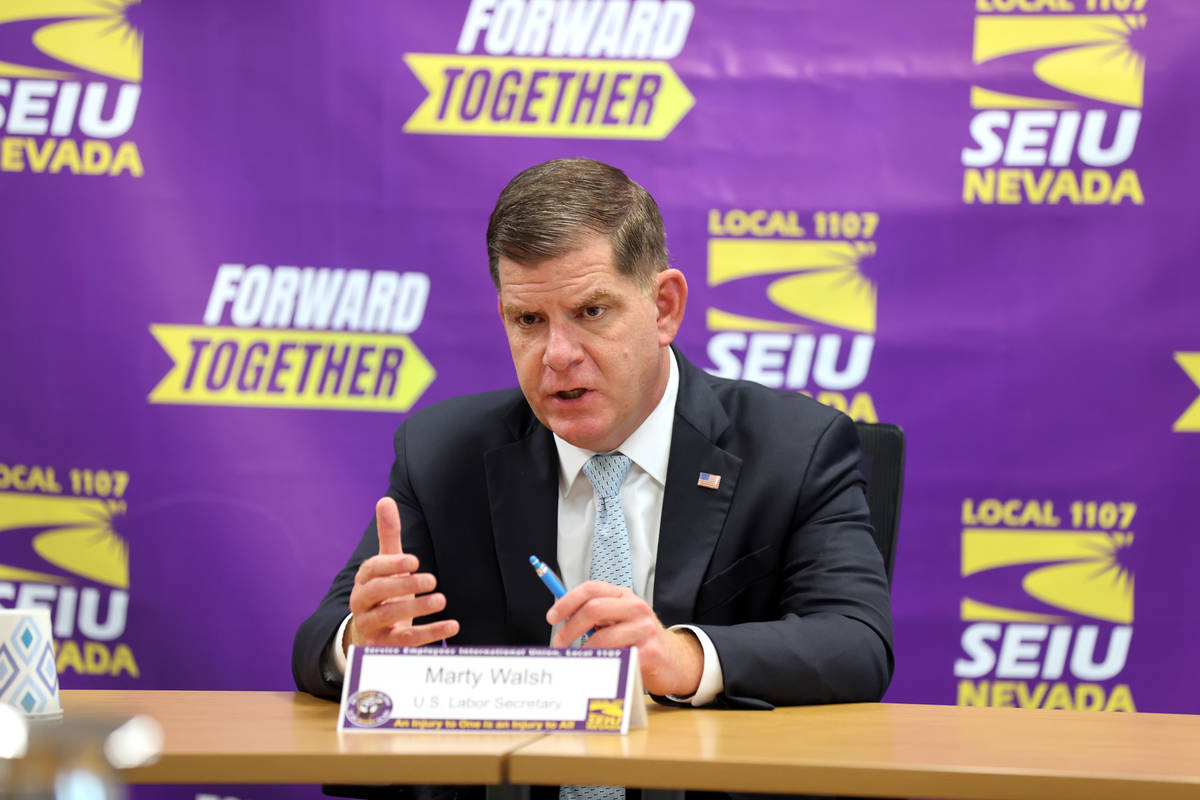 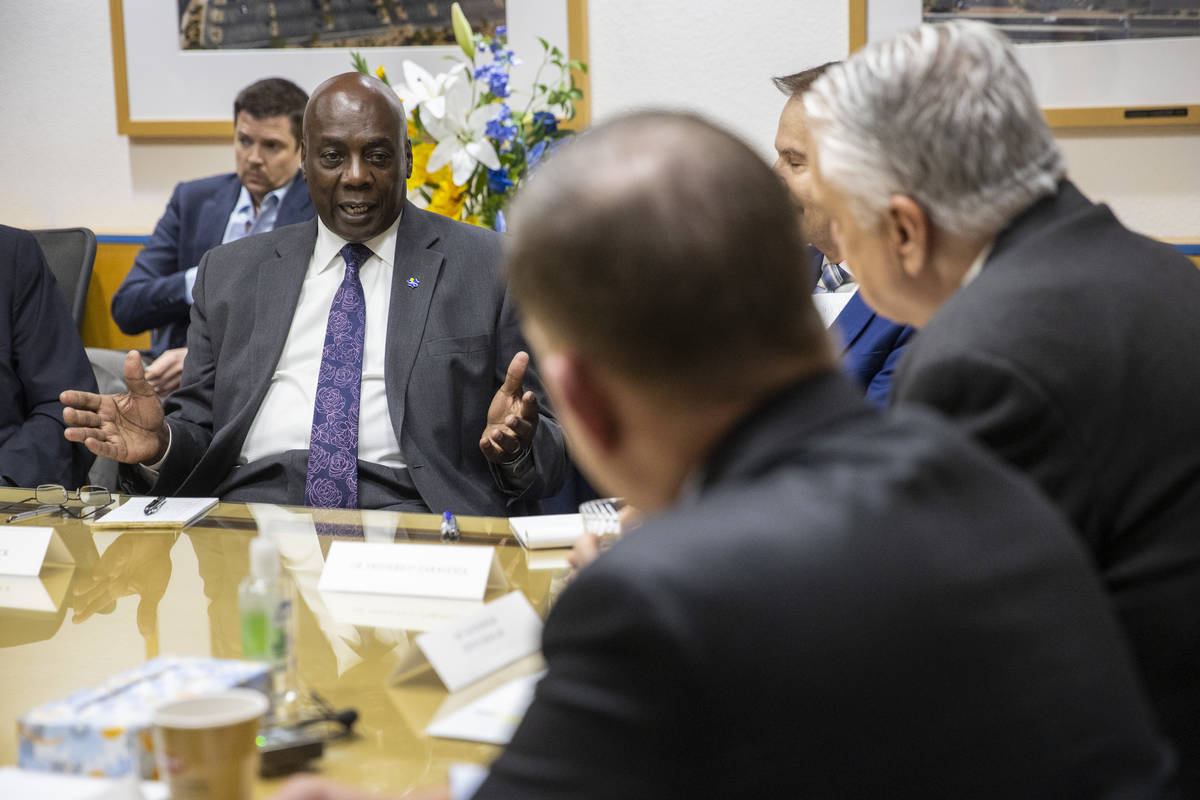 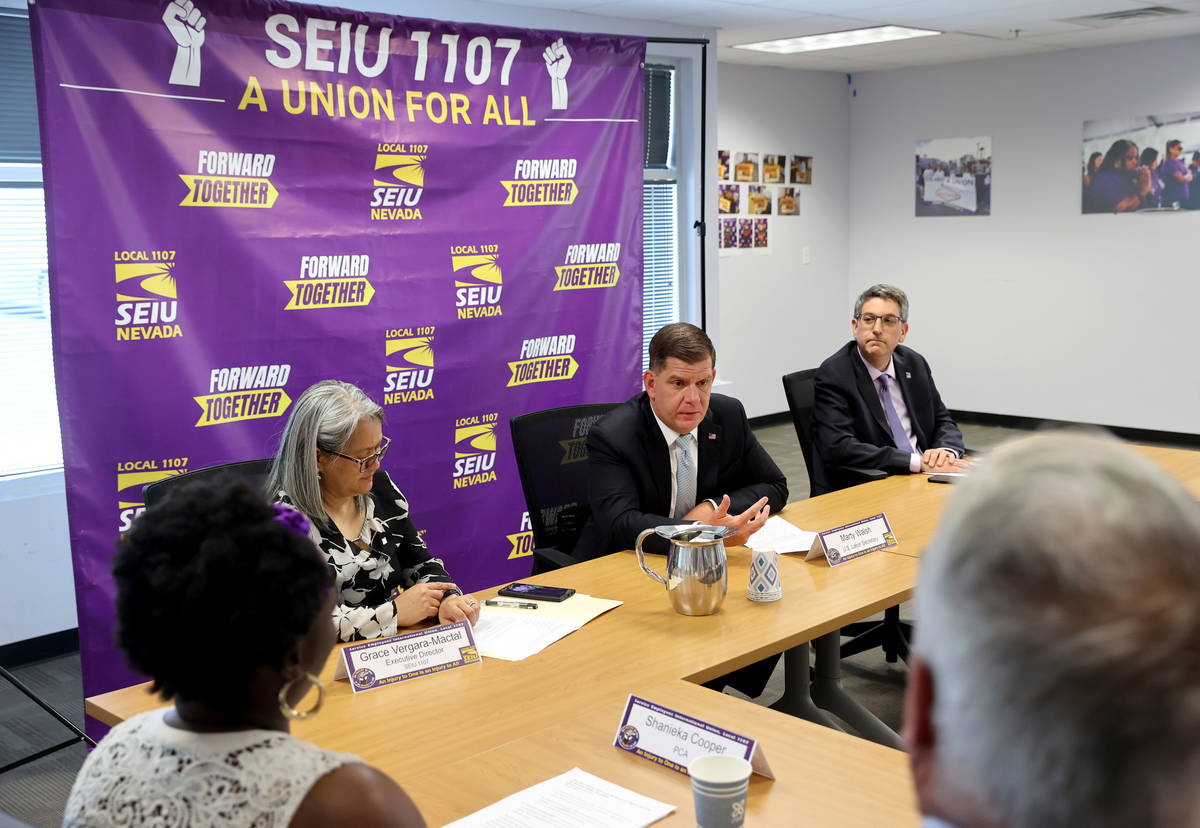 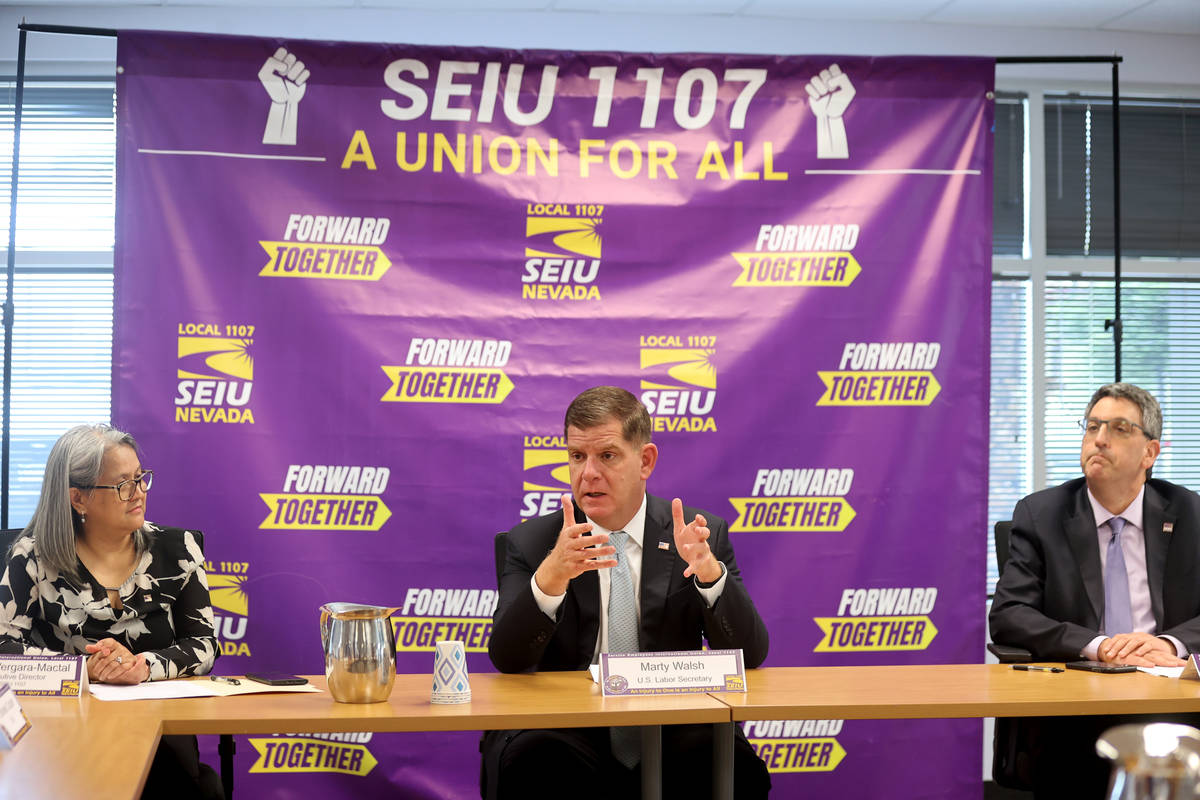 U.S. Secretary of Labor Marty Walsh visited with SEIU Local 1107 members in Las Vegas on Wednesday as part of an effort to promote the Biden administration’s jobs and infrastructure plan.

During the event, one of several in Las Vegas this week, Walsh emphasized the importance of investing in home health care workers.

“We should make sure when our loved ones go into a long-term care facility that they get the treatment and the care and the love and the respect,” Walsh told a group of union members inside SEIU Local 1107’s headquarters off Rancho Drive in Las Vegas. “[…] With a good wage, with health care, with a pension and the opportunity to raise a family.”

Walsh told the crowd of home care workers and union officials that President Joe Biden’s infrastructure proposal includes $400 billion for home care, creating 1 million new jobs and increased wages. The former Boston mayor said the plan aims to “create pathways into the middle class and allow people the opportunity that they chose and dignity and opportunity — working one job, not three jobs.”

Irma Nunez, a Las Vegas personal care aide, was one of several workers who sat at the table with Walsh. Nunez has worked in the home health care industry for about 13 years. Nunez said she makes $10 an hour working between 80 and 90 hours a week at three different jobs. Nunez said she hopes that passage of the infrastructure plan would allow her to “take vacations, make more money, and have more paid time off.”

The coronavirus pandemic put a spotlight on what home health care workers go through.

“We saw this last year the importance of making investments in your industry that you work in,” Walsh said as he spoke with home health care workers during a question-and-answer session. “We saw glaring issues with COVID. We saw a glaring issue of families struggling with salaries. So there’s a lot we can do. We ask you to take care of our loved ones every day. And in some cases, you don’t get the respect you deserve.”

The infrastructure plan is “still being negotiated” in Washington D.C., but “there’s good positive momentum” in some areas, Walsh said. However, Republican lawmakers have criticized Biden’s plan as excessive and beyond traditional infrastructure.

Neal Bisno, executive vice president of SEIU, said the infrastructure plan will not only give home care workers a better quality of life but also help the U.S. economy cope with an aging population.

“There are not enough care workers because these jobs are not good jobs,” he said. “We are an aging population. And the truth is that every single day a whole cohort of Americans turn 65 and become seniors […] There’s a huge gap between the infrastructure that exists and the workforce that’s needed.”

On Tuesday morning, Walsh visited the Culinary Academy in Las Vegas and in the afternoon held a roundtable discussion with labor and education leaders at the College of Southern Nevada, where he announced a $4 million investment in apprenticeship in the state.

His visit to Southern Nevada this week was the second by a Cabinet-level member of the Biden administration this month. In early June, Energy Secretary Jennifer Granholm visited the state to promote the president’s infrastructure plan.