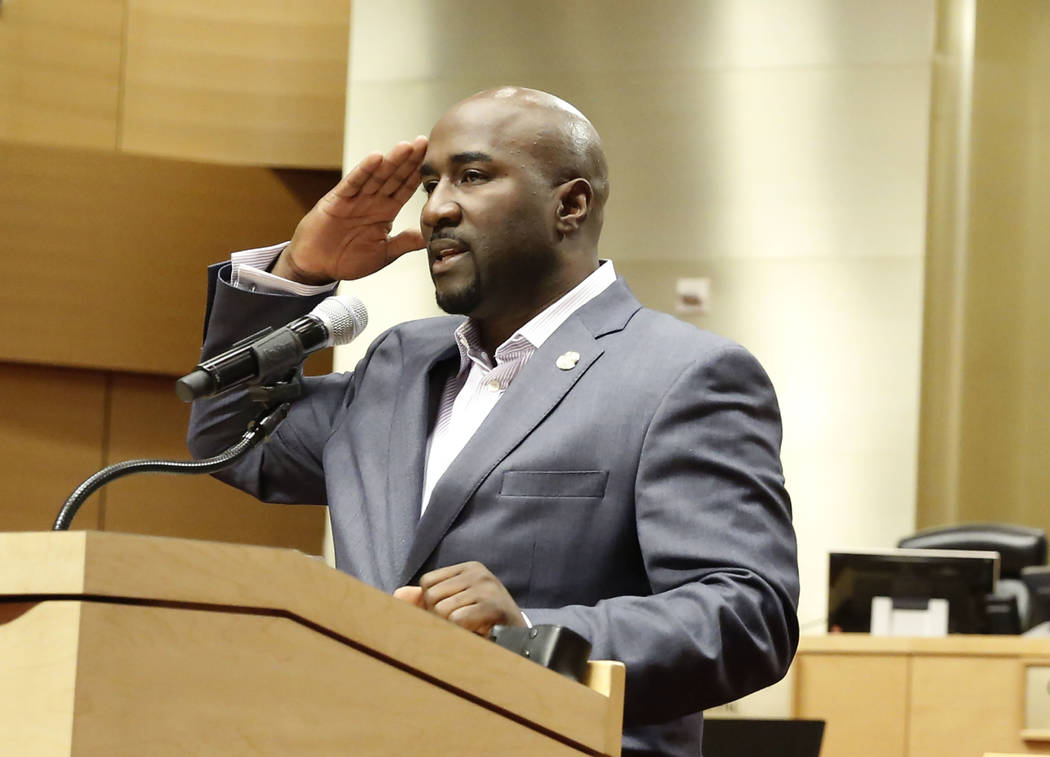 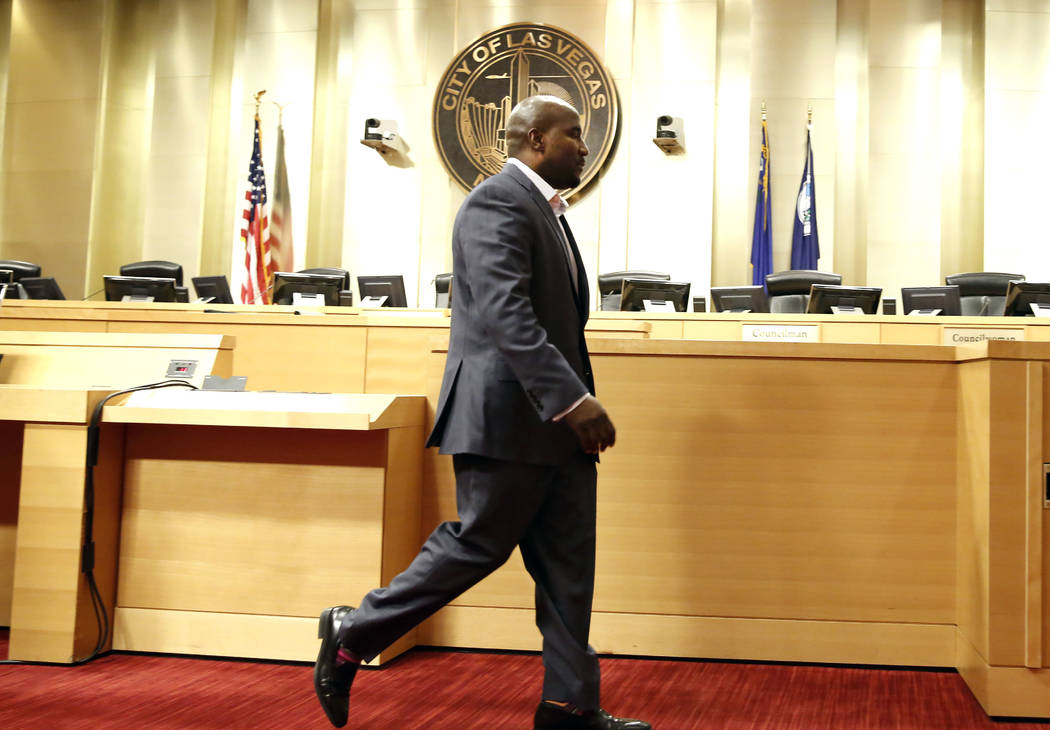 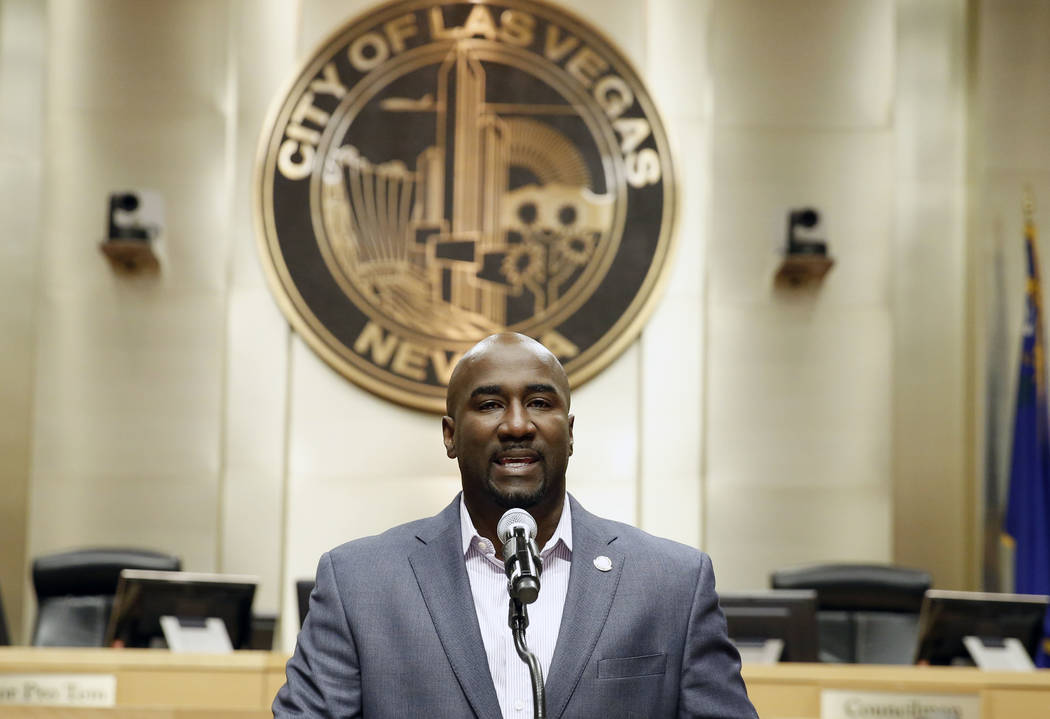 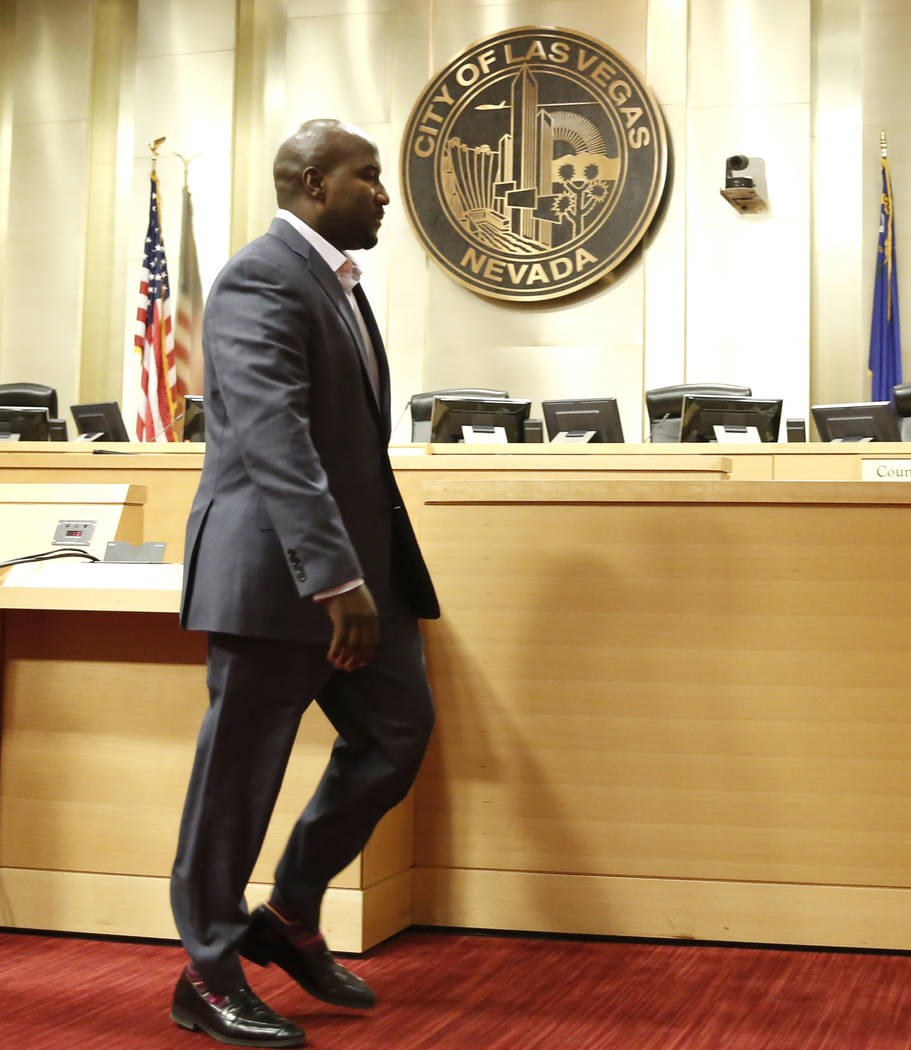 Barlow is “deeply ashamed” of his conduct, he said during a Monday afternoon news conference at City Hall.

“That shame is as dark and abiding for me as my gladness for my City Council service is bright and enduring,” Barlow said, reading somberly from a prepared statement. “I accept full personal responsibility for my conduct violating the federal criminal law. I am resolved to face the painful consequences of that conduct in a way and with a spirit that will best compensate for my wrongdoing and will best help me become a better man.”

Barlow, who was first elected to the council in 2007, said he will plead guilty to a federal felony charge for using campaign funds for personal use during his 2015 re-election campaign. The Las Vegas Review-Journal reported in September 2016 the FBI was investigating Barlow for accepting kickbacks for directing campaign funds to consultants.

Barlow confirmed the investigation in 2016 but at the time denied wrongdoing. FBI agents raided Barlow’s home and issued subpoenas for financial records, including dealings with political consultant Roxann McCoy and her company. Barlow’s campaign paid McCoy and Aspire Consulting Group roughly $30,000 in 2015, according to campaign finance records.

The Ramirez Group public relations firm also has been tied to the investigation. Barlow’s campaign paid the company $70,000 in 2016.

The Review-Journal reported this month that a grand jury had heard testimony from witnesses in the FBI’s corruption investigation, which used an undercover informant.

“I salute each and every one of you, God bless,” Barlow said Monday, hand-delivering his resignation letter to City Clerk LuAnn Holmes before leaving City Council chambers without taking questions.

Barlow’s resignation became effective at 5 p.m. Monday. The City Council has two options for filling the seat — appoint a replacement with a majority vote or hold a special election.

The council filled a vacancy by appointing a replacement candidate in 2009 in Ward 4, and held a special election in 2012 in Ward 2, Holmes said.

The city had wiped Barlow’s bio from the city website by midafternoon Monday, listing Ward 5 as “councilperson vacant.”

Councilwoman Lois Tarkanian, who has served alongside Barlow for his entire time on the council, said he called his colleagues on the council before the news conference “to let us know how much he cared about us.”

“I only know that when I worked with him, he was a hard worker. He grew into the job, he was a good problem-solver,” Tarkanian said. “I’m just very, very surprised at this, and sad, because Ricki has lots of potential.”

Barlow was serving out his third and final term on the council. Term limits would have forced him out of office next year.

Ward 5 includes part of downtown Las Vegas, the Historic West Side and stretches west to U.S. Highway 95. Symphony Park and the Corridor of Hope, where many homeless service providers and shelters are clustered, are inside the bounds of Ward 5.

Barlow also served on a number of other boards and committees, for the Las Vegas Convention and Visitors Authority, the Southern Nevada Housing Authority and the Metropolitan Police Department’s Fiscal Affairs Committee.

A group of Las Vegas residents launched an effort last week to force a recall election, an effort to oust Barlow from office early and replace him with another candidate. Leaders of the recall effort said they wanted Munford to replace Barlow before the 2019 municipal elections.

The City Council meets next Feb. 7.

Jockeying to replace Barlow began soon after his resignation announcement.

John Johnson, one of the lead organizers of the effort to recall Barlow, said he expects a number of residents to turn out for the next council meeting. Other recall organizers counted the FBI’s corruption investigation as among the reasons they wanted to force Barlow out of office early.

“Either have a special election or appoint a placeholder candidate, someone who is not going to be running in the election, so they won’t have an advantage,” Johnson said. “Being an incumbent, they would have an edge in the race.”