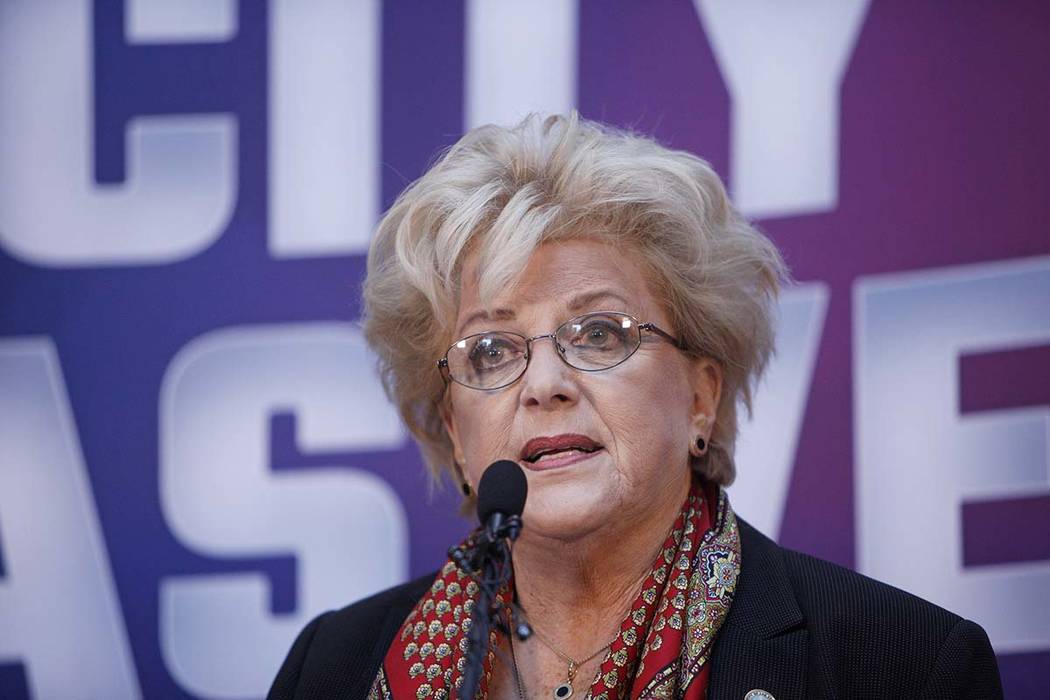 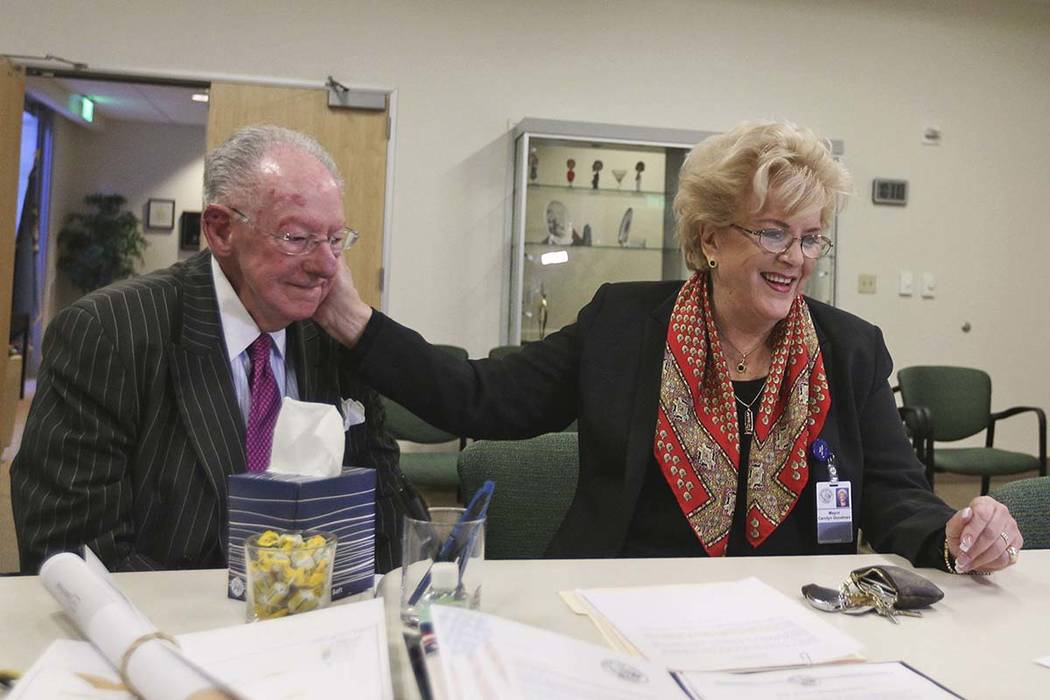 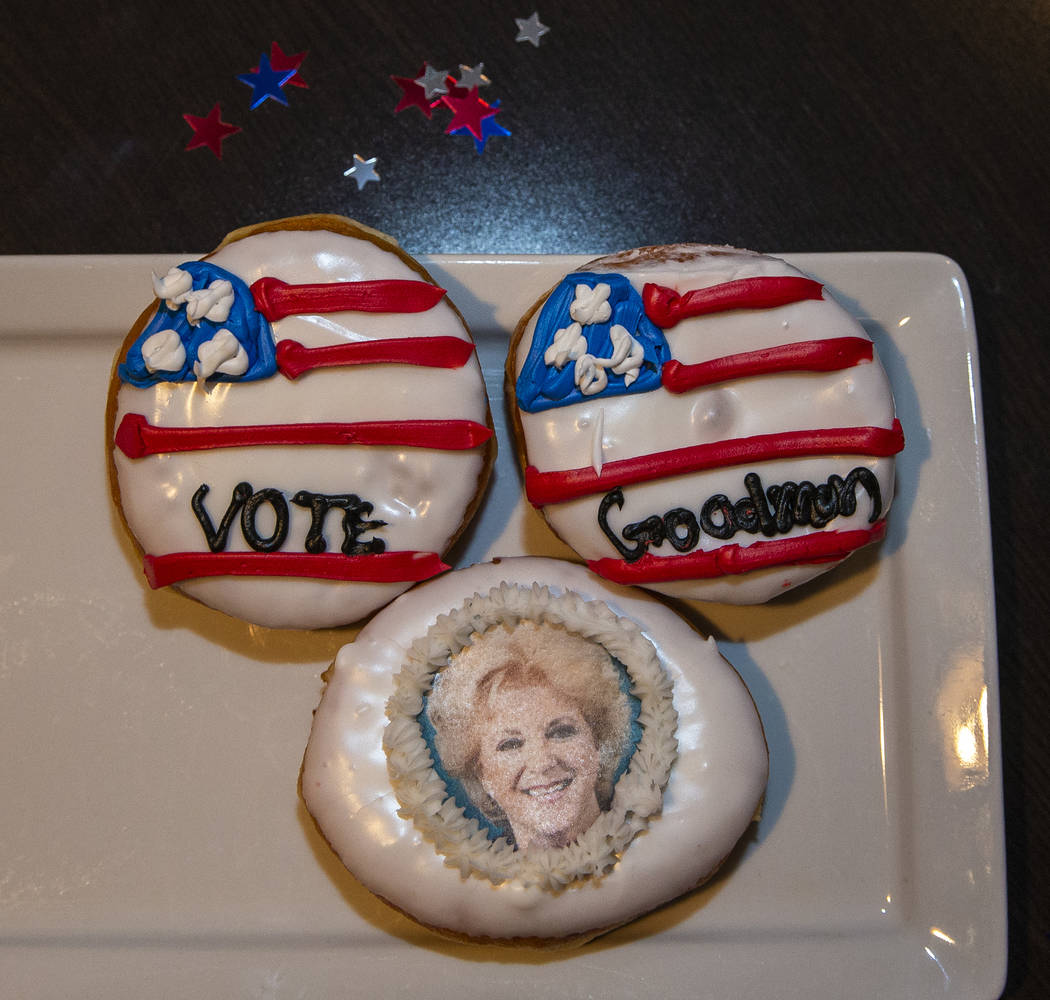 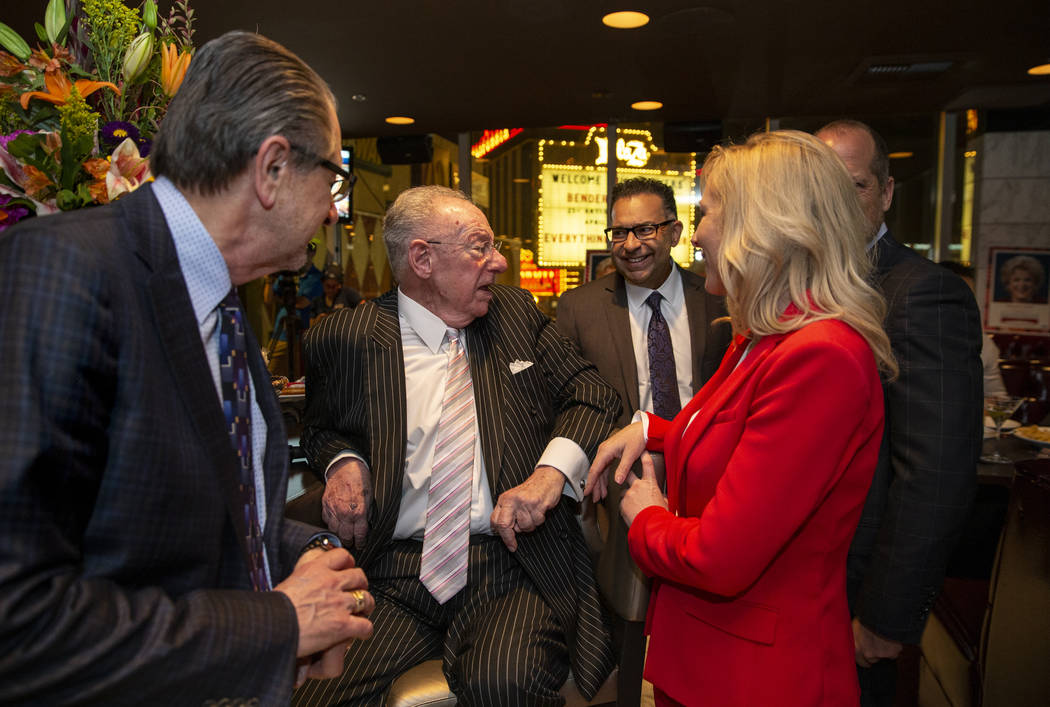 Former Las Vegas Mayor Oscar Goodman chats with his daughter Cara and other while standing in for his wife Mayor Carolyn Goodman at Oscar's Steakhouse for an Election Night watch party on Tuesday, April 2, 2019. (L.E. Baskow/Las Vegas Review-Journal) @Left_Eye_Images 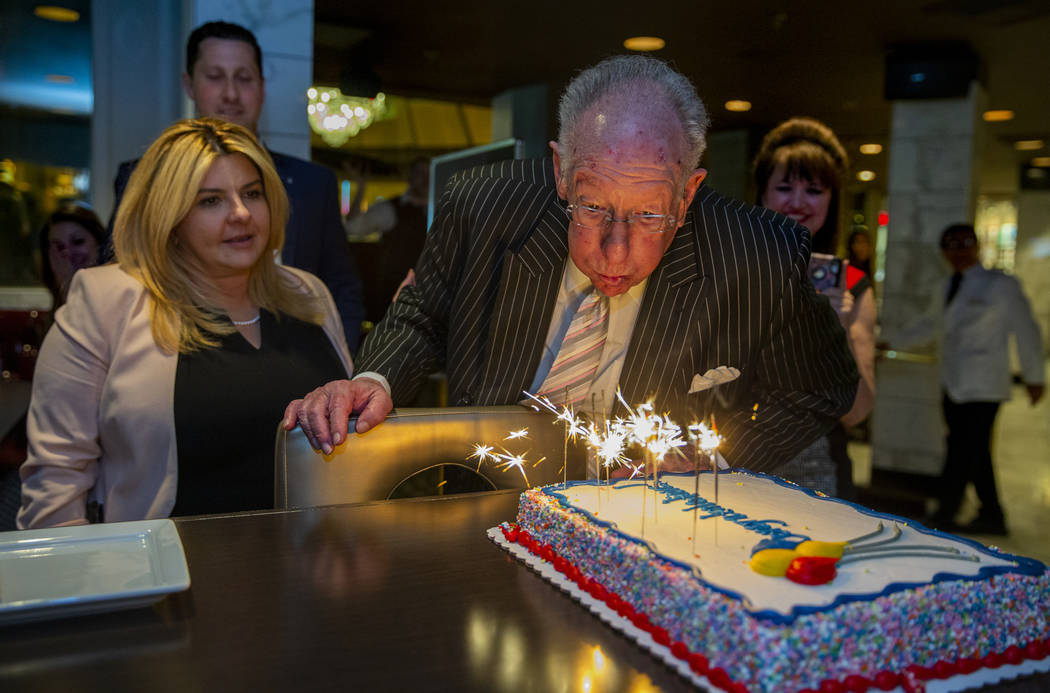 Former Las Vegas Mayor Oscar Goodman attempts to blow out some sparklers atop a congratulations cake for his wife Mayor Carolyn Goodman at Oscar's Steakhouse during an Election Night watch party on Tuesday, April 2, 2019. He is joined by Michelle Fiore. (L.E. Baskow/Las Vegas Review-Journal) @Left_Eye_Images

Las Vegas Mayor Carolyn Goodman claimed a landslide victory Tuesday night, leading six challengers with 83.5 percent of the vote on her way to a third and final term.

Goodman was noticeably absent from her election-night watch party at Oscar’s Steakhouse. The mayor, who on Friday underwent her fourth round of chemotherapy treatment for stage 2 breast cancer, voted early Tuesday at Las Vegas City Hall, then attended a separate campaign event.

But she was feeling “just a little tired” ahead of her expected celebration Tuesday evening, her husband, former Mayor Oscar Goodman, told the Las Vegas Review-Journal. So he stood in her place.

“She’s really a woman of valor,” Oscar Goodman said, a martini at his side. He noted she had not missed “a minute of work — not one second” and would be at the Las Vegas City Council meeting Wednesday.

Carolyn Goodman, 79, ran her campaign as a steadying force in Las Vegas politics, seeking to “stabilize what we have and improve upon it.” Her win Tuesday night put the topping on a nearly quarter-century legacy of Goodmans at the helm, matching her husband Oscar’s three-term tenure that began in 1999.

“Which is outrageous,” Oscar Goodman said at her election watch party.

Carolyn Goodman has spoken of wanting to leave Las Vegas robust with job opportunities, fair education for all, quality health care and accessible parks — the qualities of a world-class city — while acknowledging, “We’re not there yet.”

Immediate goals for her third term include a free transportation loop that moves people through downtown, transitional housing for the homeless and renewed cooperation with Clark County to solve the homelessness problem.

“Imagine Oct. 1,” Oscar Goodman said into a microphone at her watch party, shortly before blowing out candles on a cake in her honor. “Imagine the whole world looking at Las Vegas and the 58 innocent souls who were lost that day. And imagine not having the face of Las Vegas there to lead us forward with dignity, with respect, with everything that one would want from somebody representing a city. And my wife did it. And that’s why I think my wife deserved to have the vote that she has tonight.”