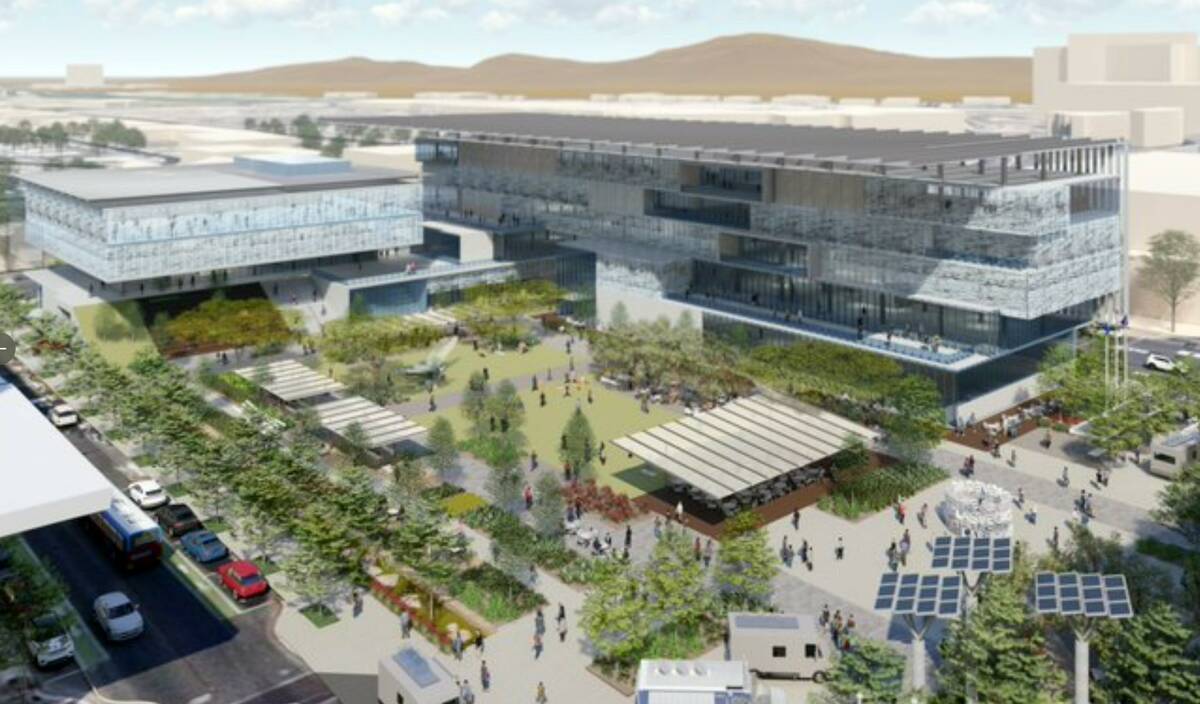 The Las Vegas City Council on Wednesday approved up to $70 million in municipal bonds to fully fund a new $165 million civic center across from City Hall, continuing the transformation of downtown with a space that officials hope will lure residents for picnics, concerts and other gatherings.

“In 2023, the excitement abounds as we watch a new civic plaza develop and rise from the ground,” said Mayor Carolyn Goodman last week during her 12th state of the city speech.

The two-building Civic Plaza, which will sprawl across an entire block, is “designed to celebrate our community to its fullest.”

The project is expected to be completed in the spring of 2025. The other $95 million in funding was allocated from a previous year’s capital improvements projects fund.

To help fund the center, the city in 2021 approved the $17.5 million sale of its former development services center building, located at 333 N. Rancho Drive.

Las Vegas government employees are currently spread out across town because City Hall — which opened in 2012 — doesn’t have enough space, Goodman said. The plaza, she added, would “bring everyone into the heart of the city,” where other local, state and federal governments operate.

“The sooner we get it together, the sooner we can have all of our employees together on one site,” Goodman said.

Work on the city-owned parcel of land — which is surrounded by Main and First streets and Clark and Bonneville avenues — began in October with utility relocation, the city said.

“Visual” construction was scheduled to begin March 1. A vacant bail bond building will be demolished, sewer and water lines moved and digging for the building foundations will then commence.

“Additionally, to keep the project schedule on track, we already opened bids for ‘early procurement’ of long lead items like the elevators, exterior glass, electrical switch gear and structural concrete,” a city spokesman wrote in a statement. “The bid for these items will be considered for award at the March 1st City Council meeting.”

The Civic Plaza was designed by LGA Architecture, which beat out two other finalists in 2021. A rendition of the current design was unveiled in May.

It’s being built by CORE Construction. The first building and the outdoor plaza area were scheduled to be completed by Oct. 1, 2024. Staff will be moved into the office spaces before the end of that year, and the second building should be completed the following spring, the city said.

Goodman might get to inaugurate at least a portion of the project before her final term ends at the end of next year.