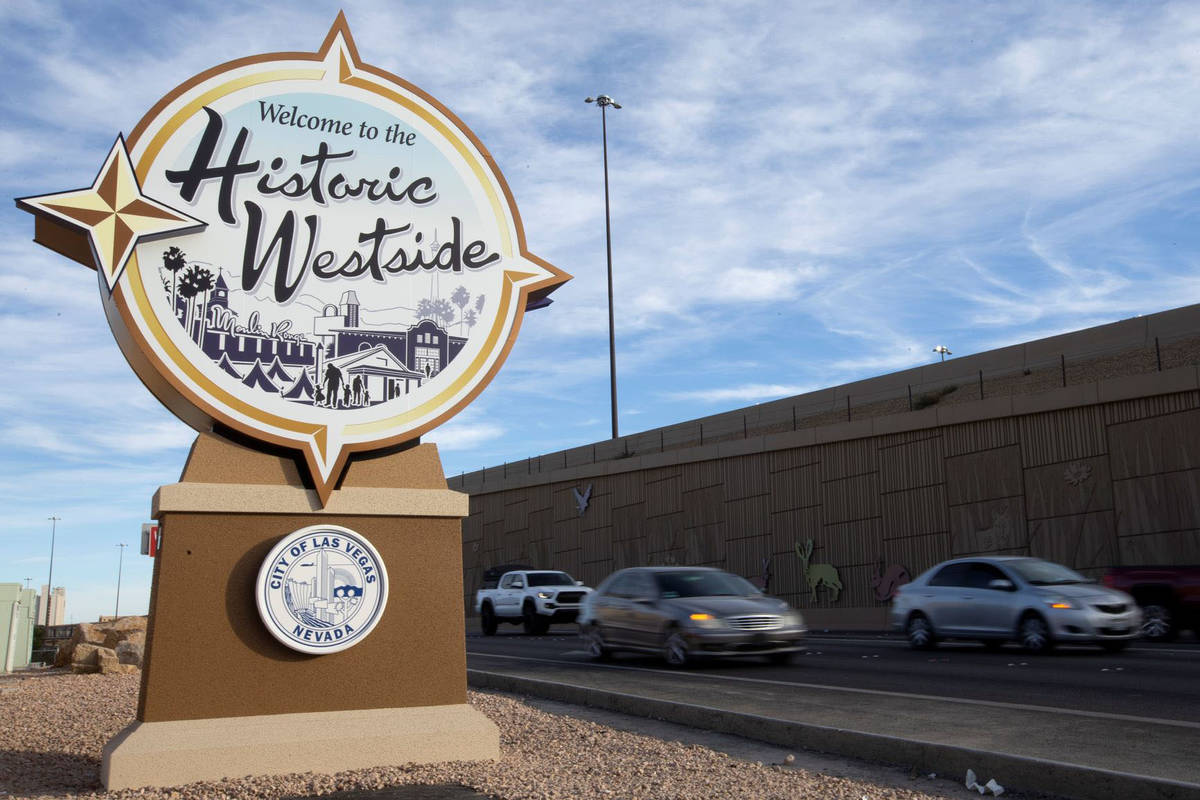 Traffic moves past the newly placed "Welcome to the Historic Westside" sign off of US95 and Martin Luther Kind Boulevard on Wednesday, Feb. 3, 2021, in Las Vegas. (Ellen Schmidt/Las Vegas Review-Journal) @ellenschmidttt 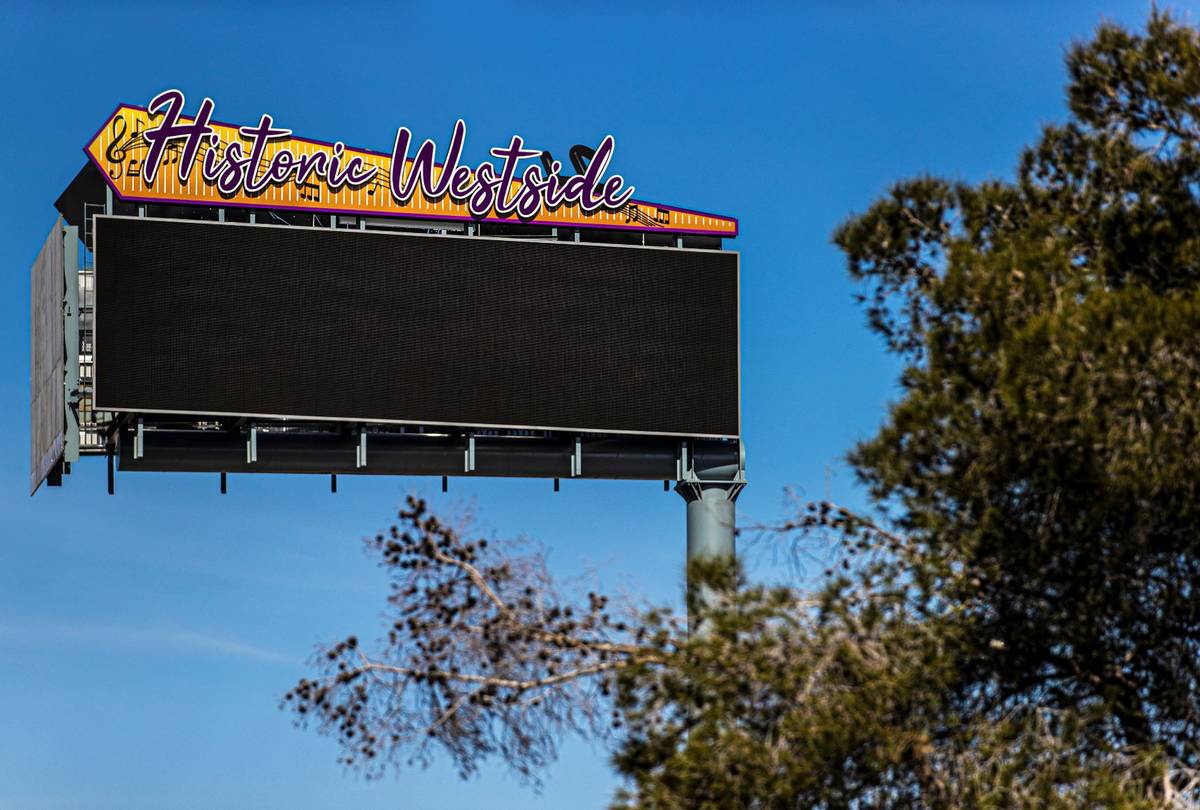 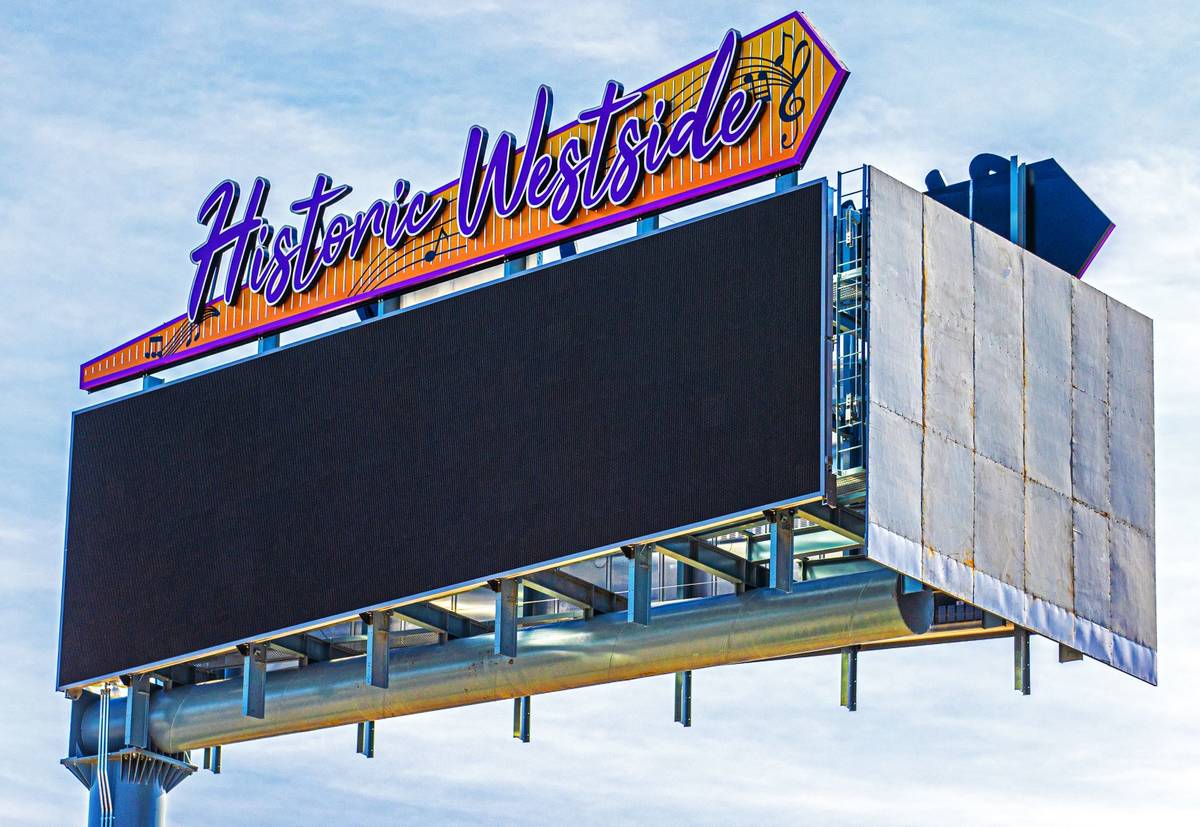 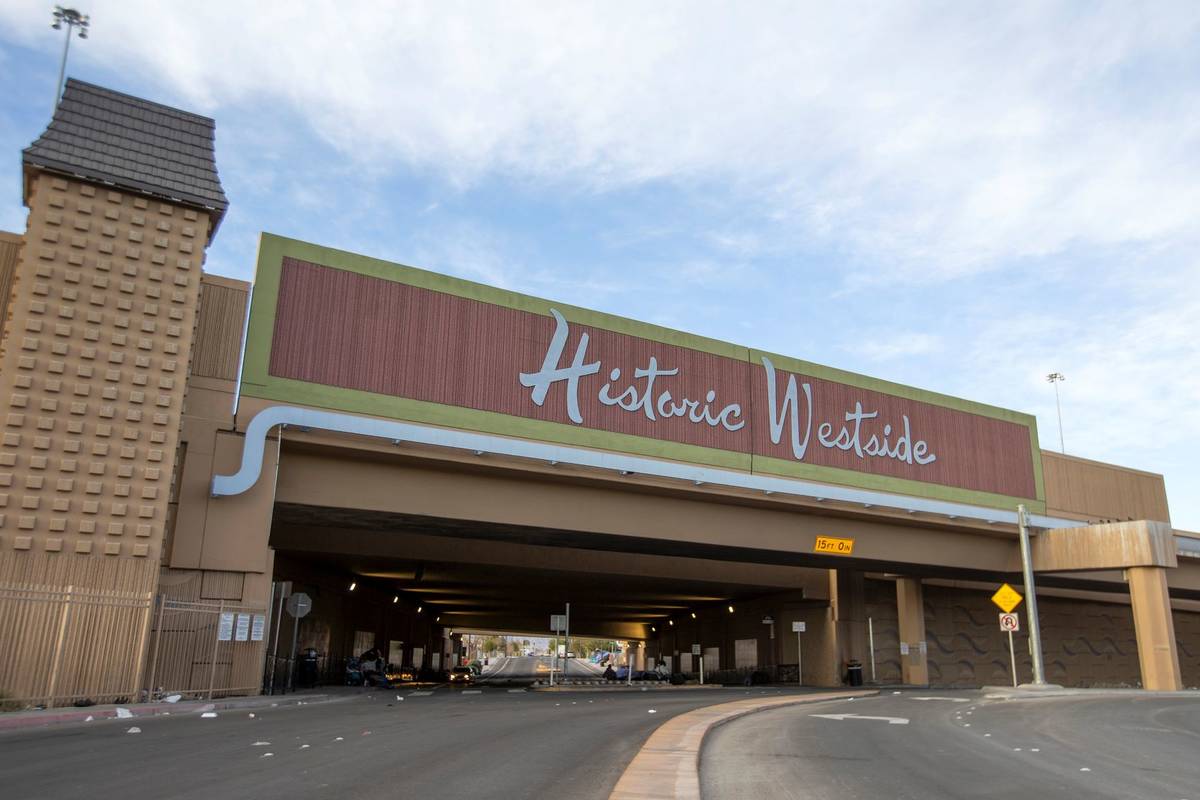 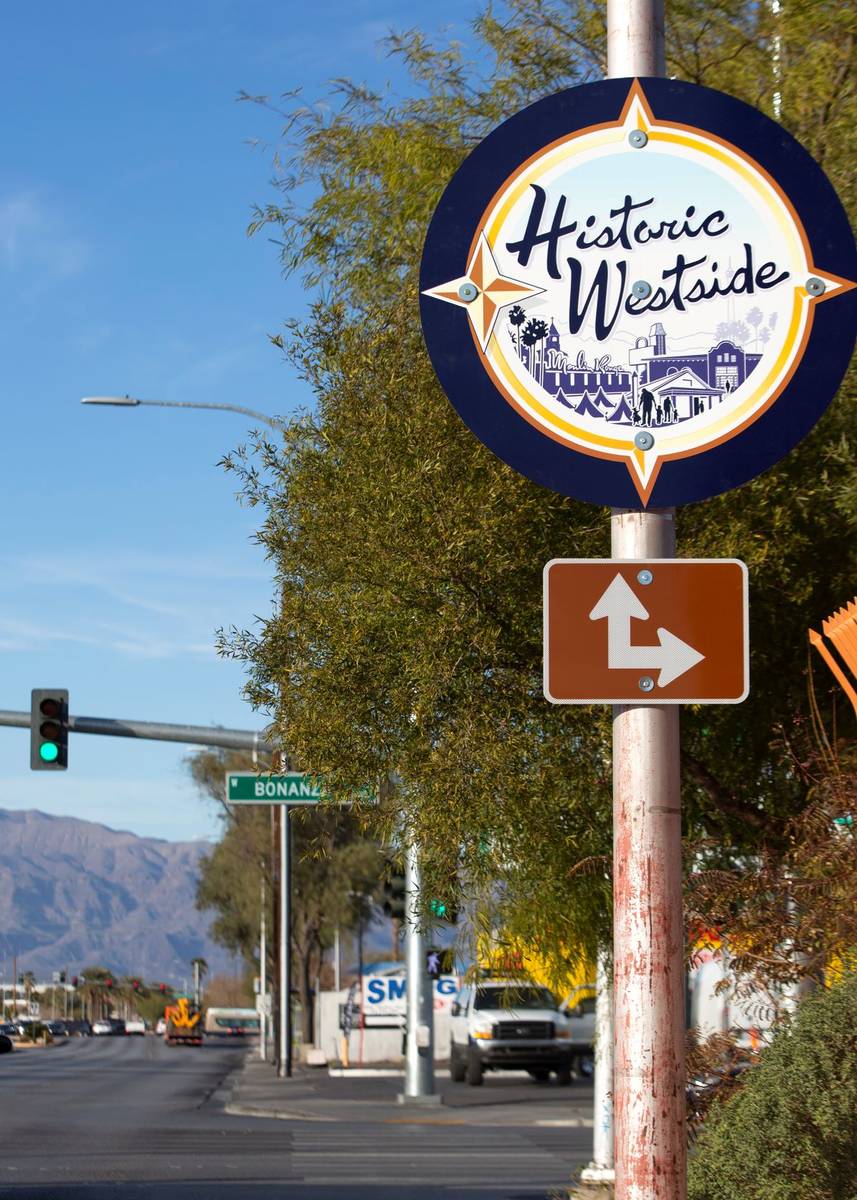 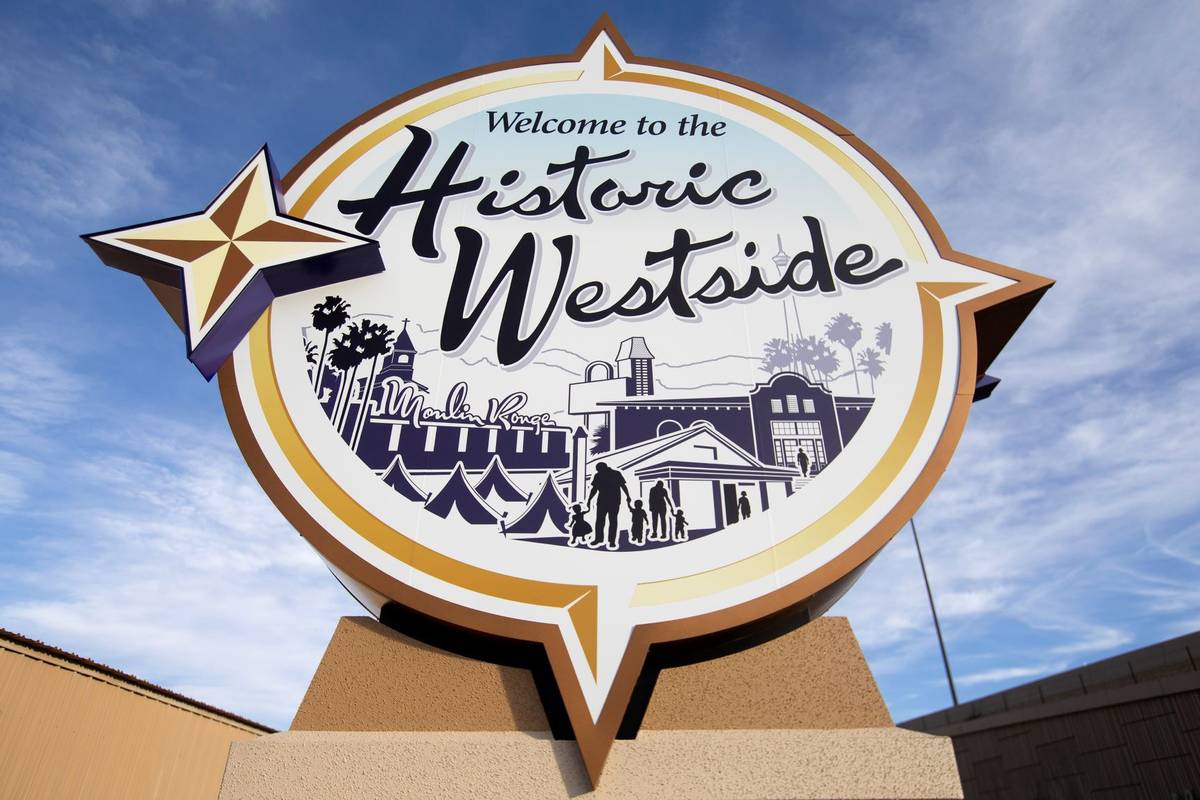 The new "Welcome to the Historic Westside" sign is present off of US95 and Martin Luther Kind Boulevard on Wednesday, Feb. 3, 2021, in Las Vegas. (Ellen Schmidt/Las Vegas Review-Journal) @ellenschmidttt 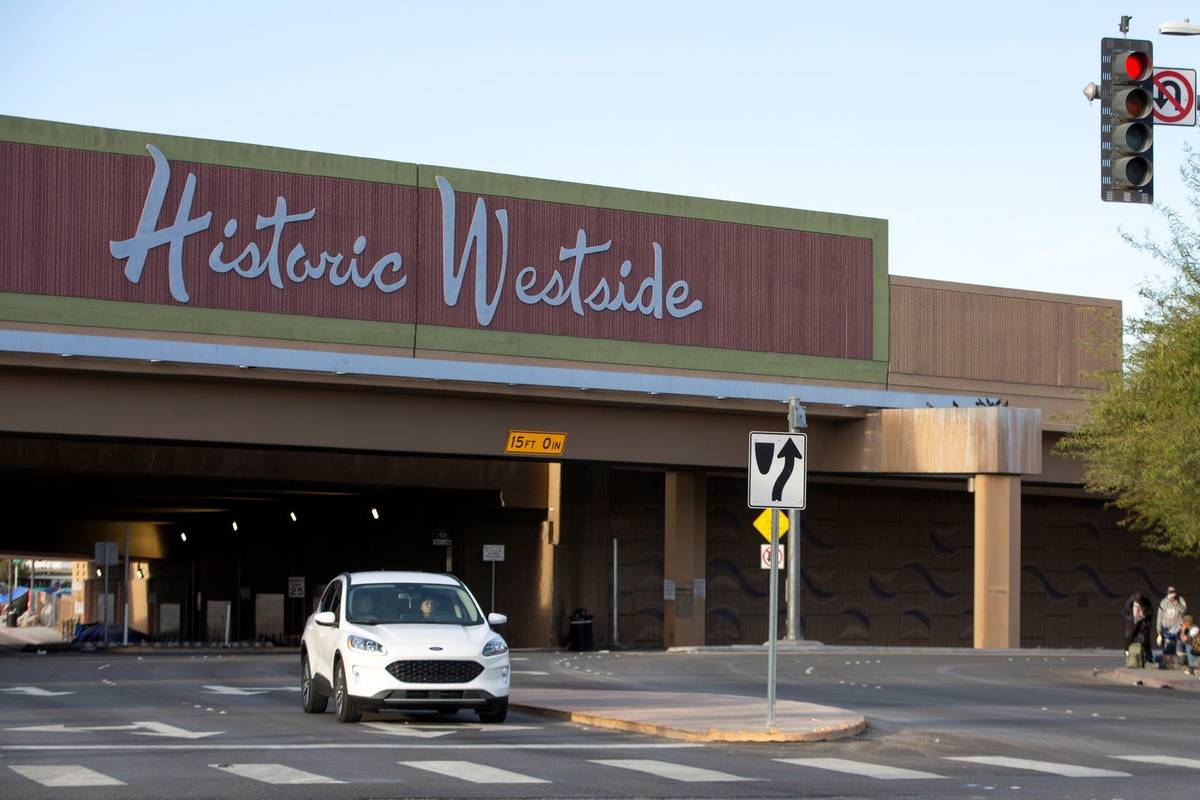 For decades, the Historic Westside has felt the effects of disinvestment.

In this predominantly Black neighborhood near downtown Las Vegas, households earn less than half of the citywide median income, the vast majority of its roughly 3,700 residents rent their homes and unemployment is typically two to three times higher than in Las Vegas at large, according to city statistics.

But last year, the city finalized the first phase of the HUNDRED Plan, a road map for revitalizing the neighborhood that focuses on commercial investment, housing, education and cultural growth.

The plan, which the city says is driven by the community, outlines the steps for a series of proposed projects within the next few years: A health care center, an African-American Museum and a co-op grocery store as the anchor tenant to an affordable housing complex among them.

Each project is attached to secured or potential funding sources, such as the city or the private sector. Jackson Avenue — a bustling thoroughfare by the 1950s — and the areas where Washington Avenue intersects with D and H streets are seen as the catalysts to a revival.

Although it is not the first redevelopment plan for the area over the years, there is newfound optimism that real change is coming after a long period of stagnation and one-off projects.

HUNDRED Plan is ‘everything’

“Despite the neighborhood’s long history of segregation, now it is at the point that the community is filled with promise,” said Claytee White, the director of the UNLV Oral History Research Center.

White hosted a panel discussion about the Historic Westside that streamed online Thursday, concluding a monthlong run of the university’s series, “We Need To Talk: Conversations on Racism for a More Resilient Las Vegas.” The media advisory for the program noted that the neighborhood has undergone recent positive changes, such as development of Legacy Park, which will honor 36 pioneers when it opens this year.

The project is included within the HUNDRED Plan In Action as one of four that is already funded and either underway or completed. Historic Westside gateway signs at freeway offramps were among eight neighborhood signs installed in January, according to the city.

“I think the HUNDRED Plan In Action is everything,” said Councilman Cedric Crear, who represents the neighborhood.

The plan’s beginnings preceded Crear’s election to the council in March 2018, but he soon found that the strategic guide for the westside was not ready to roll out.

“I said, ‘this is not going to be another plan that we talk about, we say we’re going to do it and absolutely nothing happens,’” Crear said.

So in December 2019, some 60 stakeholders met with city staff and design experts to push the plan forward.

During the panel discussion Thursday, Clark County Commissioner William McCurdy II, who represents the Historic Westside, said it will take “an incredible focus on funding for Black-owned businesses” to return the neighborhood to the vibrancy it enjoyed more than a half-century ago.

The county is a partner on the HUNDRED Plan, and McCurdy said collaborations will be critical to a revival of the neighborhood.

Erika Vital-Lazare, a professor of creative writing and marginalized voices in dystopian literature at the College of Southern Nevada, envisioned bookstores, sidewalk cafes, lofts and live-work spaces dotting the neighborhood, as well as rooftops to take advantage of scenic views of the nearby mountains and the Strip.

But as plans pledge to pay homage to the history of the neighborhood, where original families remain today and memories of Jackson Avenue are reverently held, panelists warned against the effects of gentrification.

“We can’t just look at the beautification, the evolution that’s going to come as an invitation for exploitation and I think that’s the concern,” Vital-Lazare said. “We are at that tipping point where we can do something different that really elevates the lives of those who are still in that space.”

Crear and McCurdy agreed that a revitalization must not push out residents, and the HUNDRED Plan calls for the city to establish anti-displacement policies this year to ensure new development and investment does not do so.

As forward-thinking as plans are for the Historic Westside, there are also immediate issues that must continue to be addressed. McCurdy noted the pandemic has only underscored inequities in health care for minorities.

The neighborhood is also roughly 35 percent Hispanic, according to the city.

It might be known as the Historic Westside, said Chase McCurdy, an artist involved with Legacy Park and a cousin to the commissioner, “but it’s the westside, you know, because folks are still living there. It’s not just history, it’s current as well, and it has a future.”

Ultimately, William McCurdy said, public officials must be intentional about how the neighborhood is redeveloped, and he saw its potential as an international attraction for visitors who want to experience Black culture. Crear said that young, Black developers will be important to the westside’s economic prosperity, and plans intend for the neighborhood to become a modern live-work destination.

“But also to create an even greater sense of community through all that,” Crear added. “That’s important.”

A previous version of this story misstated when Historic Westside gateway signage were put up. They were installed in January.