A Clark County District Court judge said the city of Las Vegas “abused its discretion” in approving a developer’s plans for condominiums on the Badlands golf course without a major modification to the master plan.

Opponents of plans to develop the shuttered course from the surrounding Queensridge development challenged the City Council’s February 2017 vote to allow developer EHB Cos. to build condos on 17 acres at the property’s eastern tip, and requested a judge weigh in.

Judge Jim Crockett in a hearing last week sided with the opponents, calling it “ironic” that the city and the developer “want to point to staff recommendations that were made toward the end of this process, but they want to disregard the repeated recommendations by staff in the earlier stages which made it clear that a major modification was a requirement,” according to the court transcript from the Jan. 11 hearing. 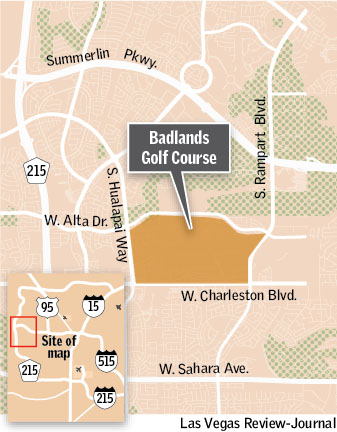 The City Council split 4-3 in favor of 435 for-sale condominiums at the former golf course’s eastern edge. Multiple development plans for the course have come before the Planning Commission and City Council since EHB bought the property, though the 435 condos are the only proposal the council has given the green light to. Construction on the condos hasn’t begun. The council voted down other development proposals in June and August.

The condo plans are one installment in a sustained struggle between the developers and a group of opponents who live in the tony Queensridge community, their properties overlooking the course. The battles have played out in courtrooms and City Hall, and their difference boils down to a fundamental disagreement over whether the golf course can be developed.

City staff at first “repeatedly explained” a major modification to the Peccole Ranch Master Plan was needed to approve the application, Crockett said.

“Instead, over the course of many months there was a gradual retreat from talking about that, and instead all of a sudden that discussion and the need for following staff’s recommendation just went out the window,” Crockett said.

The developers and their attorneys contend a major modification isn’t required for their development plans and that the golf course isn’t subject to the Peccole Ranch Master Plan. The developers also assert the property carries hard zoning and isn’t classified common open space.

“We are confident that the city’s interpretation of its own code is proper and will ultimately prevail,” said an EHB Cos. statement responding to Crockett’s decision.

Deputy City Attorney Phil Byrnes, who represented the city in court, told Crockett the golf course is not a planned development district and doesn’t require a major modification.

City Attorney Brad Jerbic could not be reached for comment.

The judge gave Todd Bice, the attorney representing the Badlands development opponents, two weeks to prepare an order. The developers and the city could appeal Crockett’s decision after that’s finalized.

This month, the council heard an appeal from the Queensridge opponents challenging the city planning director’s decision to not require EHB Cos. to submit a general plan amendment and a major modification of the master plan with a new round of development plans for another section of the course, which the council has yet to publicly consider.

The City Council voted 4-2 to deny that appeal, with Councilwoman Lois Tarkanian abstaining. Councilman Bob Coffin later said he accidentally voted with the majority — the opposite of what he intended to do. Coffin’s effort to have the council rescind that action and take another vote on the appeal died with a 3-3 vote Wednesday. Council members were briefed on Crockett’s decision in a closed-door session on Wednesday.

Coffin during the open meeting questioned why the council would revisit the issue when a judge had since ruled against the city.

“We lost the case. On this exact point,” Coffin said at Wednesday’s council meeting. “Why would we today thumb our nose at the judge and say ‘Sorry, Judge Crockett, we don’t care what you said in court … our position is going to be against you and for whoever — the developer.’”

The immediate implications for the city of the court decision on council-approved and pending plans for developing the course weren’t immediately clear.

Last week, the Las Vegas Planning Commission voted to advance to the City Council a separate set of plans to build single-family homes on a large swath of the 250-acre Badlands course, west of the planned condominium proposal. City staff recommended approval.

Multiple versions of plans have come before the Planning Commission and the council over the past two years. The developer’s team decried the process and how long it’s dragged on.

Democrats have a lead of 43,600 votes over Republicans in Clark County, largely thanks to mail voting.

Trump arrives in Las Vegas, will head to Carson City on Sunday
By Sabrina Schnur / RJ

Air Force One is expected to land Saturday night in Las Vegas ahead of President Donald Trump’s Sunday campaign rally in Carson City.

The Las Vegas City Council on Wednesday agreed to pay $280,000 to resolve claims by an ex-city firefighter that a sex video probe was mishandled by the fire department.

A deal to revitalize the historic Huntridge Theater awaits approval by the Las Vegas City Council and state and local historic preservation authorities. 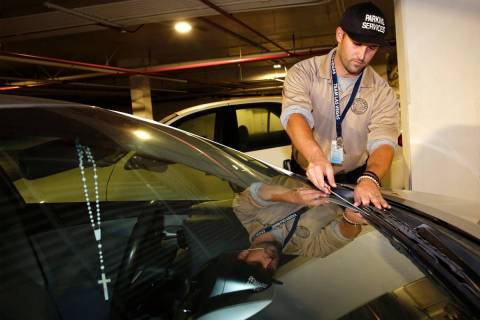 The city of Las Vegas will allow people to pay for some parking tickets by donating children’s toys ahead of the holiday season.