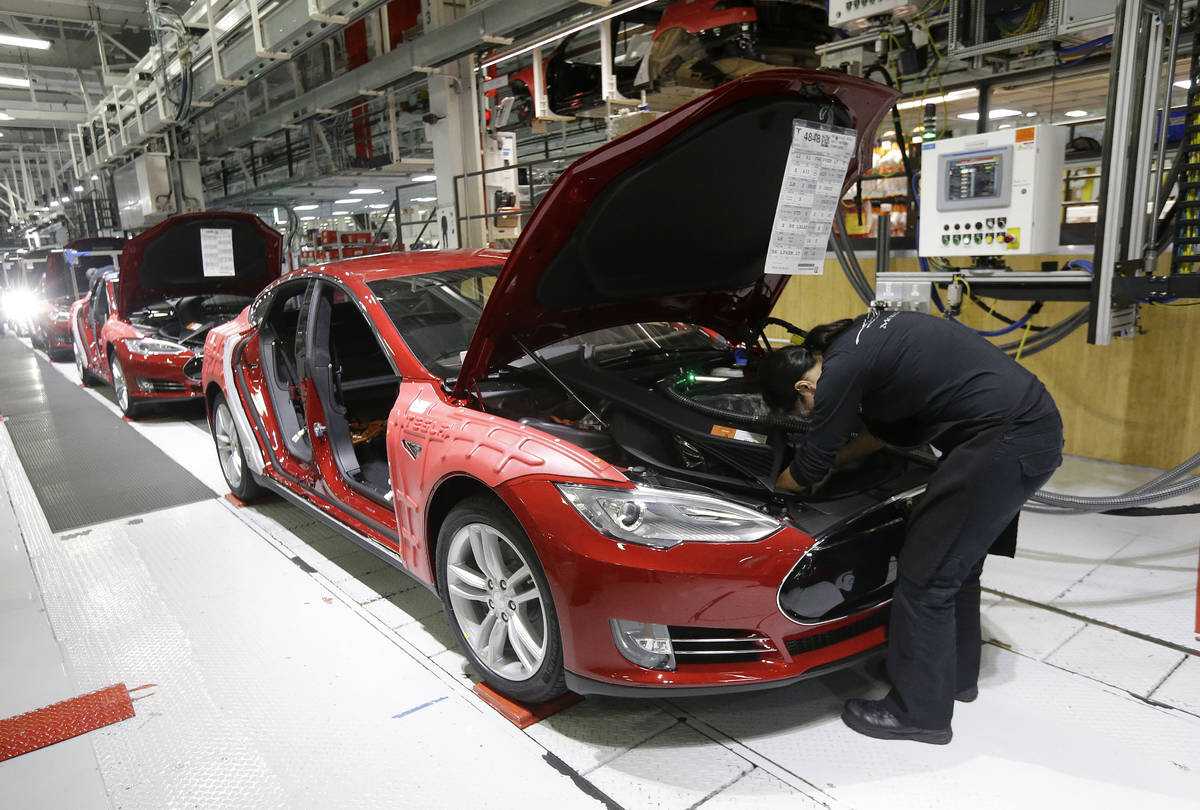 FILE - In this May 14, 2015, file photo, Tesla employees work on a Model S cars in the Tesla factory in Fremont, Calif. Tesla CEO Elon Musk is threatening to pull the company's factory and headquarters out of California in a spat with local officials over reopening an electric vehicle plant. On Twitter Saturday afternoon, May 9, 2020, Musk threatened to sue over health department coronavirus restrictions that have stopped Tesla from restarting production at its factory in Fremont south of San Francisco. (AP Photo/Jeff Chiu, File) 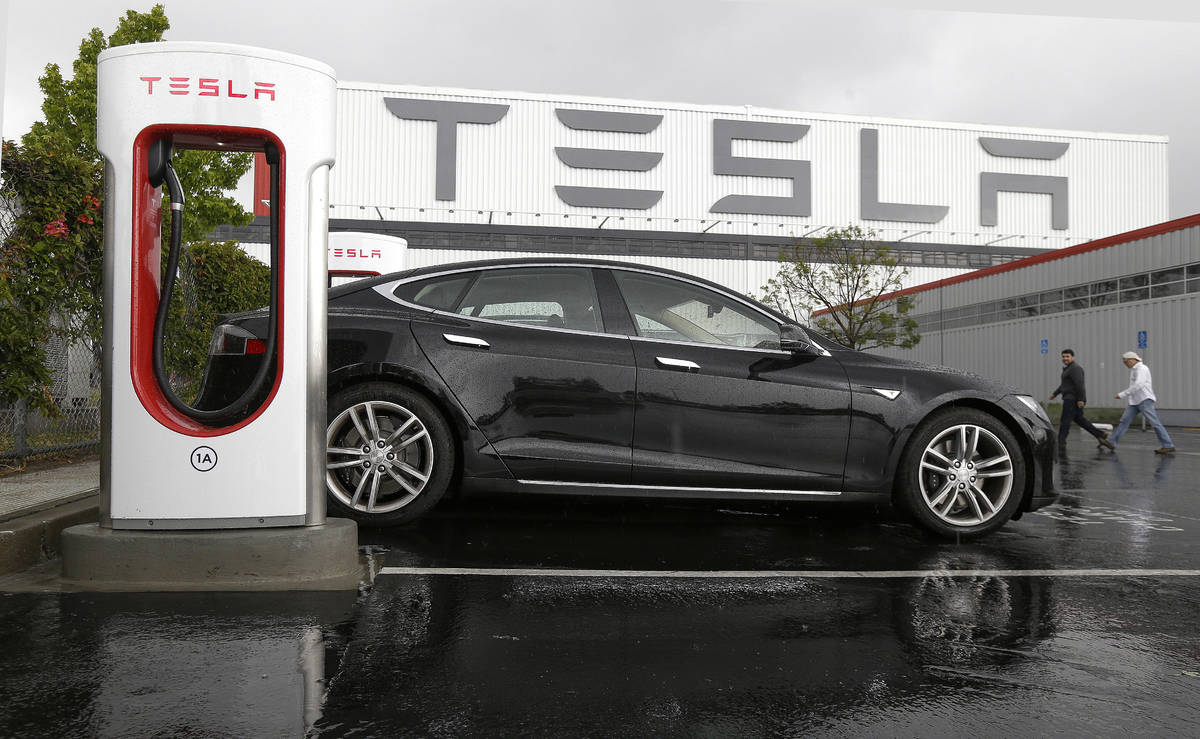 FILE - In this May 14, 2015, file photo, a Tesla vehicle is connected to a Tesla charging station outside of the Tesla factory in Fremont, Calif. Tesla CEO Elon Musk is threatening to pull the company's factory and headquarters out of California in a spat with local officials over reopening an electric vehicle plant. On Twitter Saturday, May 9, 2020, Musk threatened to sue over health department coronavirus restrictions that have stopped Tesla from restarting production at its factory in Fremont. In a statement Saturday, the department says it has been working with Tesla to develop a safety plan. (AP Photo/Jeff Chiu, File) 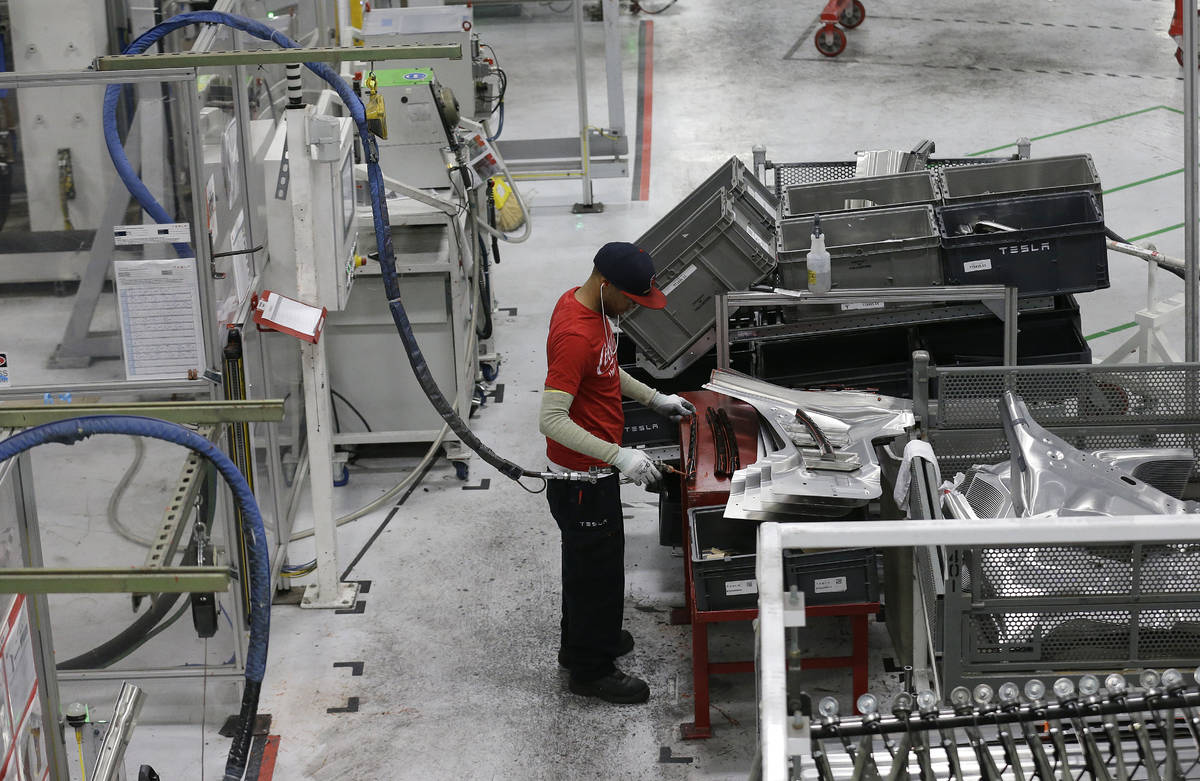 FILE - In this May 14, 2015, file photo, a Tesla employee works on metal parts for Tesla cars in the Tesla factory in Fremont, Calif. Tesla CEO Elon Musk is threatening to pull the company's factory and headquarters out of California in a spat with local officials over reopening an electric vehicle plant. On Twitter Saturday afternoon, May 9, 2020, Musk threatened to sue over health department coronavirus restrictions that have stopped Tesla from restarting production at its factory in Fremont south of San Francisco. (AP Photo/Jeff Chiu, File)

Las Vegas city officials have been aggressively courting Tesla to relocate its headquarters to the city in the wake of CEO Elon Musk’s threat to leave California, according to emails obtained by the Las Vegas Review-Journal.

Soon after Musk’s since-deleted tweet on May 9 that “Tesla will now move its HQ and future programs to Texas/Nevada immediately,” top Las Vegas officials began orchestrating plans to engage the executive in order to determine his interest in moving the company’s home base into the city.

They reached out to Zappos CEO Tony Hsieh for contact information for Musk, internally suggested downtown for the headquarters and submitted to a Tesla lobbyist one proposed site in far northwest Las Vegas for large-scale development.

“Let’s get aggressive on this,” City Manager Scott Adams wrote in a May 11 email to Economic Development Director Bill Arent and other city officials.

Arent, who had told city officials in one email that recruiting Tesla headquarters would be “a big coup,” said Thursday that “there does seem to be interest in the company in having a conversation” but talks held thus far were preliminary. He also said the city had not yet reached Musk directly.

Arent noted that decisions about business relocations and expansions take time and planning, adding that the city would seek to continue discussions with Tesla.

“We think it’s a good opportunity and ultimately we think the company will decide what’s the best fit for the company,” he said.

But the city also views itself as a contender for the headquarters and any possible operation expansion, pointing to its skilled workforce, logistics, and McCarran International Airport, which Arent said is ideal for conducting business both domestically and abroad.

Internally the city has raised the prospect of a headquarters fitting into Symphony Park or existing corporate buildings in downtown. And Arent said the city and Tesla have a good relationship from past dealings related to vehicle and charging station projects and when the city supported the state’s successful efforts to draw the company to northern Nevada.

‘Happy to call him’

Arent sent a text message to Mayor Carolyn Goodman on May 9, the day of Musk’s tweet, asking whether she would be willing to contact Tesla personally as city officials worked to get a direct number for Musk or another Tesla executive, records show.

Goodman responded that she would be “happy to call him.”

On Thursday, the mayor said she has “been on the outskirts” of the effort and is unsure of where it has led, offering a tempered response to whether she viewed Musk’s tweet as an opportunity to lure Tesla’s headquarters to downtown Las Vegas.

“Until I speak with him or his representatives directly to understand what they are looking for, I probably wouldn’t envision that yet,” she said.

Two days after Musk’s tweet and when Arent and Goodman exchanged texts, Arent emailed the mayor to inform her that city officials were working to schedule a call with Musk.

City and Tesla officials acknowledged there could be difficulties in immediately reaching Musk or another executive decision maker, given the company’s battle with public health officials in Alameda County who had stopped his electric vehicle factory from reopening.

That same day, May 11, Hsieh said he forwarded to Musk an email that Arent sent Hsieh seeking contact info for the Tesla executive.

By May 12, the city was continuing to work its contacts: Business Development Manager Ryan Smith had spoken with a spokesperson and head of workforce development and education at Tesla.

In an email to Tesla lobbyist Craig Hulse, Smith said that Goodman would “love the opportunity to reach out to Elon and not only show support but discuss how Las Vegas could be an option for future expansion within Tesla.”

Hulse had been serving as the point person “with leaders internally for this” and expressed a willingness to discuss details and Tesla’s current process, according to emails.

Smith and Hulse scheduled a call for the next day.

Elected city leaders were quick to try to appeal to Musk on Twitter, including Councilwoman Michele Fiore and Councilwoman Victoria Seaman.

Fiore cited the available land in northwestern Las Vegas, where her Ward 6 is located, and invited Musk on a tour. She also pointed to the state’s business-friendly tax and regulatory structure, and its affordable cost of living for Tesla employees.

“(A)nd while we may not be able to legally registered (sic) your son’s name yet, we sure would love to see a new Tesla building open up on X Æ A-12 Lane,” she said in a statement posted on her Twitter account, referencing the unusual name given to Musk’s son.

Dear @elonmusk ,
We @CityOfLasVegas would welcome you @Tesla here. pic.twitter.com/tXnwFH6kqx

But the city is unlikely to be the only Nevadan government vying for Tesla’s attention along with leaders in Texas. Clark County spokesman Erik Pappa said the county has been in contact with Tesla “and will continue to be in contact with them.”

The company already has a presence in northern Nevada, with its battery plant dubbed Gigafactory 1 in the sprawling Tahoe-Reno Industrial Center, near Reno.