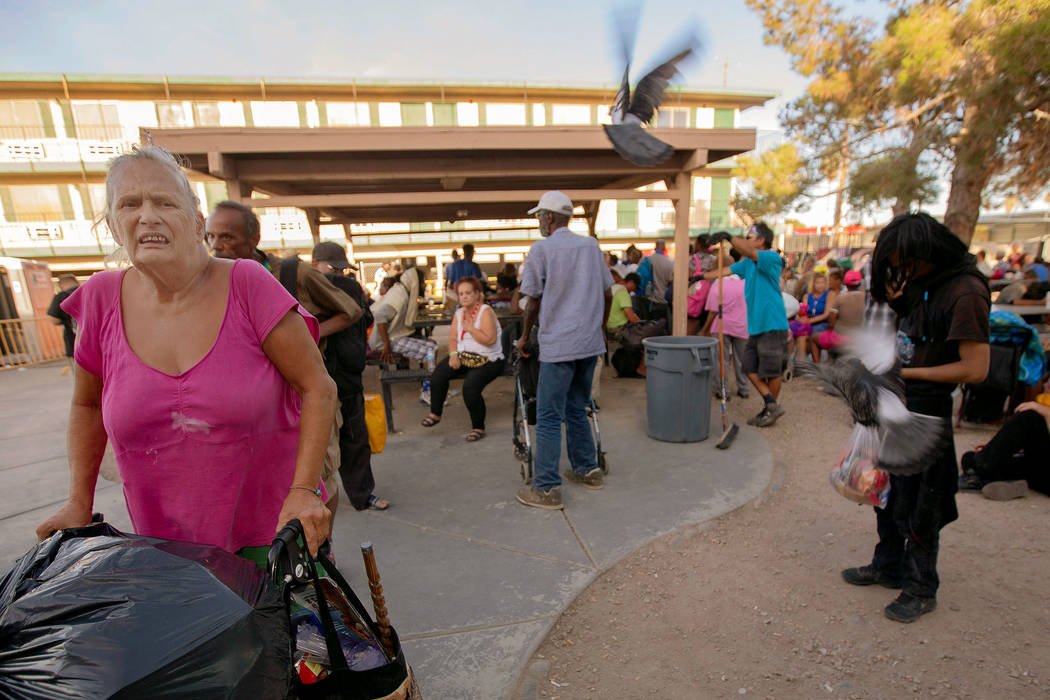 Wanda Johnson, 64, waits in line for disabled residents seeking to sleep on outside mattresses at the Courtyard Homeless Resource Center on Wednesday, July 17, 2019 in Las. (Michael Blackshire/Las Vegas Review-Journal)

Residents wait in line for mattresses to sleep for the night at the Courtyard Homeless Resource Center on Wednesday, July 17, 2019 in Las. (Michael Blackshire/Las Vegas Review-Journal) 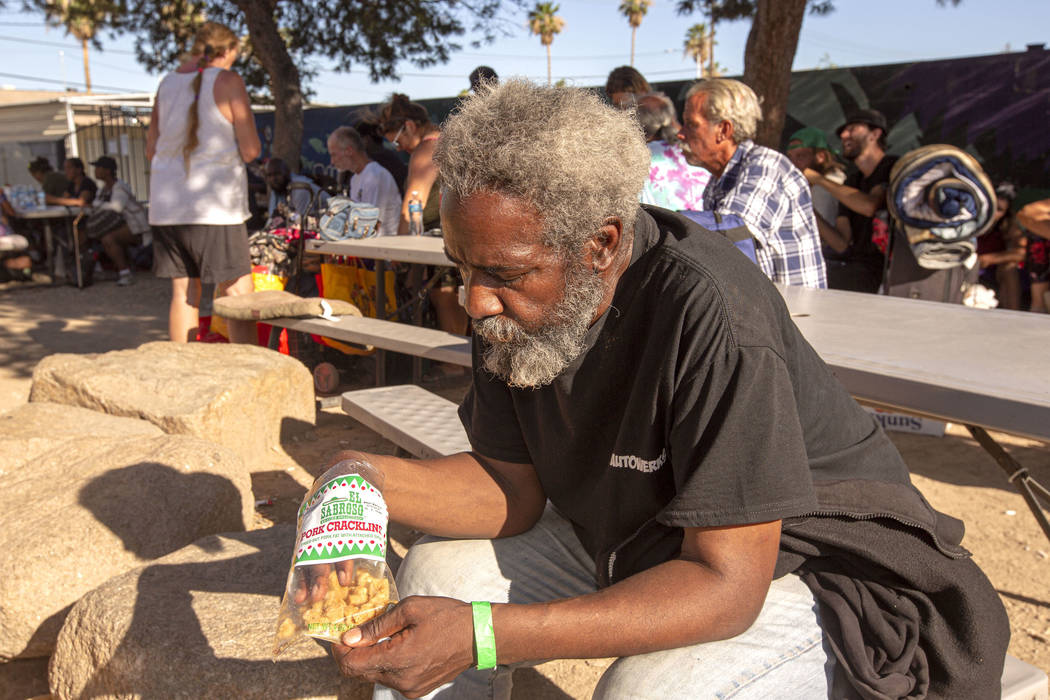 Allen Grayson, 60, from Bakersfield, Calif., eats popcorn before getting in line for a spot on a mattress at the Courtyard Homeless Resource Center on Wednesday, July 17, 2019 in Las Vegas. (Michael Blackshire/Las Vegas Review-Journal)

The council approved spending nearly $226,500 this year to place people in the units, which will be spread between Veterans Village and the Women’s Development Center, starting Aug. 1.

The units — converted motel rooms and apartments — will be filled on a case-by-case basis for up to a year by qualified clients, who will also receive case management and supportive services. The long-term goals are to get them into permanent housing and make them self-sufficient.

The money from the city’s general and redevelopment funds is aimed at expanding operations at the city’s Courtyard Homeless Resource Center, the 24/7 facility off Foremaster Lane and Las Vegas Boulevard North where the homeless can sleep and access services.

“It’s precedent setting. It’s courageous. It’s taking that step forward that we’ve been hammering away that you need to have that transitional housing,” Veterans Village CEO Arnold Stalk said about the move. “The demand is so high, and you can’t end homelessness without housing.”

The 15 apartments being leased through the Women’s Development Center at 7530 W. Sahara Ave. will be scattered throughout the city and will cost the city $9,600 a month.

Both leases have the option for the city to renew them for five additional one-year terms after the first year.

The city currently uses weekly and daily motels for bridge, or transitional, housing, but the master leases allow the city “to do it in a more cost-effective way and have those units readily available under a master lease,” said Kathi Thomas-Gibson, the city’s director of community services.

“This is right in our wheelhouse,” she said. “It’s what we’ve always done and intended to do … It’s a small step, but an important step.”

The housing is meant for homeless people who are going to be working or have benefits coming and need to get established before saving up move-in costs.

“This way, the waiting room isn’t on the streets,” Thomas-Gibson said.

Stalk said the Veterans Village units will be in the newly acquired converted motel next door, formerly known as Fremont Gardens II. The units have a kitchenette and shower, among other amenities.

Last week, Clark County said its January homeless census counted 5,286 people living in shelters and on the streets, down from 6,083 the previous year.

The housing-first approach has been a priority for the county as well. County commissioners have reserved nearly $9.7 million in projected marijuana fees for homeless initiatives.

Commissioner Tick Segerblom said at a meeting Tuesday that another $2 million will be directed toward homelessness, raising the total to nearly $12 million.

Stalk said more entities need to step up if the community is serious about sharply reducing homelessness.

“I’d love to see that housing system at the courtyard … where we’re actually placing people in a bed,” he said. “We have a pathway to end homelessness, and we can’t do it ourselves. We need the government. We need private businesses. We need nonprofits.”