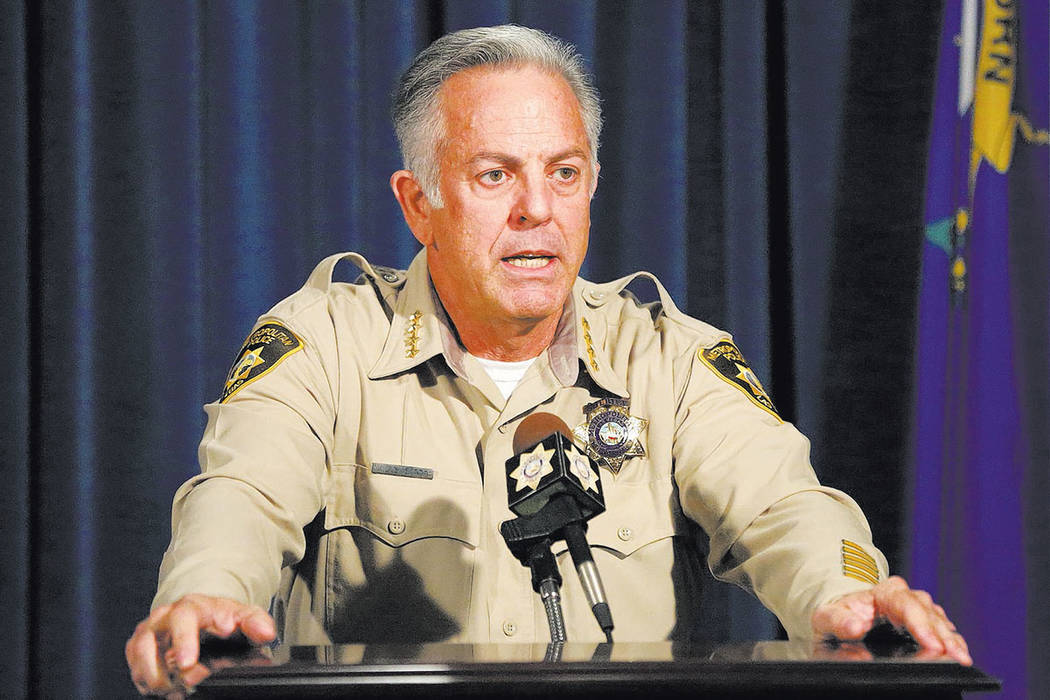 WASHINGTON — When the Metropolitan Police Department announced last month that it “will no longer honor federal immigration detainers for civil immigration violations,” the press release cited a Sept. 27 federal court decision in Central California as the reason.

Detainers allow local law enforcement to keep undocumented immigrants in custody for up to 48 hours to give ICE time to pick them up for deportation.

The press release did not mention that no other jurisdiction in Nevada had changed its policy because of the court’s holding in Gonzalez v. ICE, which Metro noted was likely to be appealed to the 9th U.S. Circuit Court of Appeals. “Until the uncertainty in the law is clarified,” the press release reported, “(Metro) must cease honoring ICE detainers.”

Asked if any other jurisdiction had changed its detainer policy because of the Gonzalez ruling, a Metro spokesman said, “The city of Las Vegas made a similar announcement, otherwise we are not aware.”

A spokeswoman for ICE knew of no other jurisdiction that had changed its ICE detainer policy because of the Gonzalez ruling.

ACLU of Nevada spokesman Wesley Juhl told the Review-Journal he could think of no other jurisdiction that had changed its policies because of the ruling by U.S. District Court Judge André Birotte Jr. of the Central District of California. “I think we’re ahead of the pack in that regard,” Juhl responded.

While the ACLU of Nevada lauded Metro for “ending its practice of honoring unconstitutional ICE detainers,” and not participating “in the federal government’s deportation agenda,” Sheriff Joseph Lombardo assured the public that the department would continue to work with ICE to “remove persons without legal status who have committed violent crimes.”

That announcement, however, leaves unanswered questions and again raises the issue of whether Las Vegas is a so-called sanctuary city that declines to cooperate with federal law enforcement.

In 2016 the Department of Justice inspector general put out a list of “sanctuary” jurisdictions that didn’t cooperate with ICE detainers. The report cited a 2014 Metro announcement that the agency effectively would not honor ICE detainers because of an Oregon federal magistrate’s ruling.

In 2017, when ICE reported that Las Vegas was “non-cooperative” with federal immigration officials, Metro protested that the agency had participated in the 287(g) program for years and said it had transferred 99 inmates into ICE’s custody that year alone.

The 287(g) program allows local law enforcement agencies to perform federal law-enforcement tasks on immigration, under a memorandum of understanding with the Department of Homeland Security.

As Metro had moved toward enforcement, then-Attorney General Jeff Sessions said he would look into the sanctuary city designation.

In June, Lombardo signed a memorandum of understanding extending the department’s participation in the 287(g) program until June 30, 2020.

When Metro announced on Oct.23 that Metro had suspended the 287(g) program, Lombardo said, “While the (Gonzalez v. ICE) ruling can be seen as a setback, I am determined that through cooperation with our federal partners the goal of removing the worst of the worst can still be accomplished.”

Clark County Commissioner Tick Segerblom, who joined anti-ICE protesters in February, told the Review-Journal it is not clear to him “if it is change in policy or they’re just changing how they describe it.”

Segerblom said Lombardo, a Republican, was chummy with ICE during Trump’s first two years in office when Nevada had a Republican governor and senior U.S. senator, Brian Sandoval and Dean Heller, respectively. Sandoval completed his second and final term in January, and Heller was defeated for re-election in November 2018.

“Then we got a new Democratic Governor (Steve Sisolak), we got another Democratic senator (Jacky Rosen),” Segerblom said in reference to the mid-term election. “I think the sheriff sees the writing on the wall and figured I want to get along with these people.”

But Lombardo said politics wasn’t the reason. He said he was trying to avoid litigation with the ACLU when he made his decision.

“Maybe other jurisdictions can afford to fight a lawsuit; I can’t,” he told the Review-Journal.

At the same time, the sheriff said he had issues with 287(g). He was concerned with individuals arrested for local charges, not immigration offenders. And when he tried to stop ICE from removing individuals for minor charges, it did not always work.

“I think the public elected me to make decisions,” the sheriff said. “I think the key to this is the word ‘suspended.’ I advised ICE that I’m suspending cooperating with the 287(g) program. I intend to cooperate with ICE,” while he awaits court rulings.

Lyon and Nye counties still participate in the program.

While the ACLU of Nevada also leaned on those rural counties to get out of 287(g), Lyon County Sheriff Frank Honeywell told the Review-Journal that he sees the program as a reliable tool for rural agencies, and it doesn’t help when large agencies like Las Vegas distance themselves from it.

Lyon County doesn’t use the program the way a big city would use it. “The only time we’re using it is, somebody gets arrested on local charges. And they come into a facility and we don’t have any way to identify them.”

Honeywell estimates Lyon County uses the program for up to four people in a year. Trained staff use the federal immigration database to identify individuals who remain in custody on local charges. “Nobody in our custody is solely placed here on an ICE detainer,” Honeywell stipulated.

The 287(g) program is an optional arm of Secure Communities, a program launched in 2008 that authorizes federal officials to check the fingerprints taken from local law enforcement with Department of Homeland Security databases to identify in-custody undocumented immigrants with prior criminal records.

But as advocates for undocumented immigrants began to pan Obama as the “deporter in chief,” he pulled back on how and when the program could be used. In 2014, Obama terminated the program. But during his first month in office, President Donald Trump signed an order to reinstate Secure Communities.

By that time, the Gonzalez case had been in the system for years. In 2012, ICE issued an immigration detainer to the Los Angeles County Sheriff’s Department before Gerardo Gonzalez was released from custody.

That should not have happened because Gonzalez, who was born in Pacoima, California, is a natural-born U.S. citizen, and was never subject to removal.

Relying on ICE documentation, the ACLU argued that ICE databases can be unreliable. Between May 2015 and February 2016, 771 of 12,797 detainers issued were lifted because the cited individuals were not subject to removal — 42 were U.S. citizens.

Thus, the ACLU argued, the 287(g) program violates the Fourth Amendment protection against “unreasonable searches and seizures.” Judge Birotte agreed and issued a permanent injunction to stop detainers based solely on unreliable database searches. The potential for misidentification, he wrote, means that “many U.S. citizens become exposed to possible false arrest when ICE relies solely on deficient databases.”

The ACLU also argued successfully that it is unconstitutional for ICE to issue detainers through state or local law enforcement agencies in states that have not passed an explicit law authorizing the use of ICE civil detainers to hold individuals.

Birotte’s injunction also prevents the Pacific Enforcement Response Center in Laguna Niguel from issuing detainers based on database-only checks to 43 states that use the service.

Randy Capps, research director of the Migration Policy Institute, observed that the Metro announcement leaves it to the department’s discretion to share information with ICE. “Nothing in this court case precludes ICE from conducting interviews with people in custody,” Capps explained, and it would be in keeping with Las Vegas’ focus on cooperating with ICE to remove the worst offenders.

The Pacific Enforcement Response Center has responded to the order by sending information to ICE field offices, which can issue detainers by using a workaround that responds to the judge’s concerns, according to Paige D. Hughes, ICE western regional communications director.

“It does impede us,” Hughes told the Review-Journal. Jails are “the safest place to apprehend an individual,” she added, because it means ICE agents don’t have to show up at suspects’ home or work. ICE estimates that three-quarters of the arrests it made this year came from ICE working with jails and prisons.

Another 32,977 had criminal charges pending.

“This judge is taking some relatively rare cases and using that as a tool to attempt to shut down a large part of ICE’s operation,” observed Jessica Vaughan of the pro-enforcement Center for Immigration Studies. That’s true even though detainers “are directed at people who have come to ICE’s attention because they have been convicted or charged with crimes,” she said.

“Most sheriffs I know would tell the ACLU to pound sand,” Vaughan added.

Segerblom said Las Vegas never went so far as to tell ICE to stay away.

“I would say not,” Hughes responded. ICE is working to find ways to work with Metro, she said.