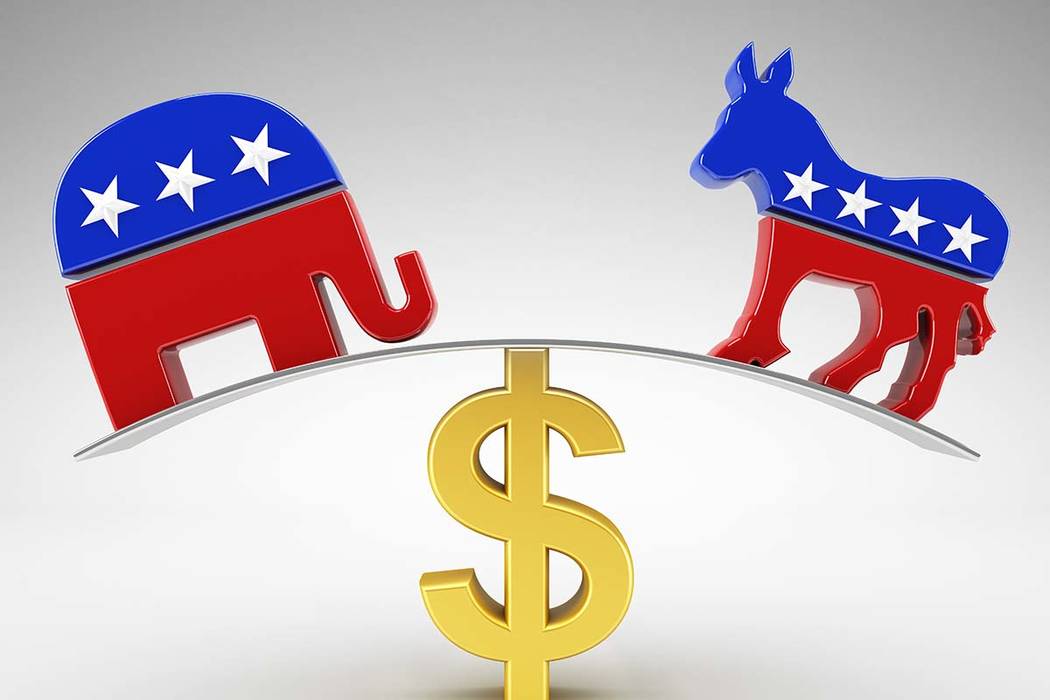 In politics, campaign donors vary: Unions, elected officials, businesses and individuals all pony up cash in hopes of getting their candidate elected.

It’s no different in Las Vegas City Council races for Wards 1 and 3, where candidates tapped into each group through the first quarter of 2019 to bankroll campaigns. But the share of money raised from each provides a glimpse at how candidates turned to these donors and even how successfully they pitched their viability.

The Review-Journal analyzed campaign finance records through March 31, the latest data available, to glean rough estimates of who is funding the candidates or contributing goods and services. The analysis excluded some minor donations of $100 or less, which not all candidates itemized. But the amount excluded for some candidates was no more than 2 percent of their total fundraising.

Both leaned heavily on individual donors and family trusts, according to the analysis.

Munier, who is seeking to make the city more user-friendly, said her first-quarter fundraising was indicative of a “grassroots” campaign: “I’m used to doing as much as I can with as little as I can.”

But she maintained a fair share of big donors. She received $10,000 from Lanny Love, whom Munier described as the daughter of her deceased neighbor, and Tarkanian’s election committee; $5,000 from Las Vegas lobbyist Jay Brown and $2,500 from lobbyist law firm Kaempfer Crowell, records show.

Kaempfer Crowell, which fields the most active lobbyists at City Hall, acted as an equal opportunity donor, providing identical amounts to four candidates between both wards. The firm was one of at least three companies to spread money across the board. Republic Silver State Disposal, the city’s waste and recycling services provider, and Nevada Restaurant Services, operator of Dotty’s Casino, were the others.

Knudsen, who is running on a platform that calls attention to the need for improved health care and education — punctuated by a vow to push for construction of a full-fledged children’s hospital — cited his early campaign start in 2017 for his fundraising total.

“I started really early and I tried hard to make sure everybody knew me,” he said. “I think that opened the door for people to want to contribute to the campaign.”

Both candidates primarily used a combination of individual donors and businesses to drive campaign dollars. Neither received help from unions through the first quarter. Yet both say they will report such donations in second-quarter filings due by mid-July.

Diaz’s contributions poured in fairly evenly across all categories. Still, she by far garnered the strongest support of any candidate from political action committees and unions, which were wide-ranging from public safety to education.

She also received funds from competing sides of the Badlands golf course dispute. Frank Schreck, a gaming attorney opposed to developing homes on the defunct golf course, gave her $2,500. A PAC spearheaded by Laborers Local 872, which favors the buildout and tried to oust former Councilman Steve Seroka over his opposition to it, donated $10,000 to her council campaign on the day she resigned from the Assembly in December.

Diaz recorded the donation in her fourth-quarter Assembly disclosure. Therefore, it is not incorporated in the Review-Journal analysis.

Diaz, 40, a teacher in the ward who emphasizes a renewed focus on schools and vows to be an open door for a broad spectrum of community concerns, said she believed her broad-based fundraising efforts, including individual donors, speak to her long-established relationships in the district.

“People like to hear they’re making a wise investment,” she said.

Clary, 37, relied much more heavily on individual donors and businesses. The rest of her campaign benefited from political figures, from whom she received some of her largest contributions. Donors included Assemblywoman Heidi Swank, D-Las Vegas, a historic preservationist who was a leader in the movement to reject former Rep. Ruben Kihuen’s council candidacy, and former Clark County Commissioner Chris Giunchigliani, whose Be the Change PAC also donated to Knudsen.

Diaz has enjoyed support from more lawmakers, however. In three instances, political figures provided help to both campaigns. Commissioner Justin Jones — who knew Diaz from their joint service in the Legislature and Clary through work with a group that trains women to run for office — donated $2,500 to each.

“I told both of them that I think they’re both great candidates and we’d be lucky to have either of them, and that I wasn’t going to endorse or do anything more than that,” Jones said.

Clary, a Huntridge community activist who espouses a neighborhood-first philosophy with an eye on historical preservation, did not receive any money from PACs or unions through the first quarter. But that’s not because of any bad blood between her and major donors. Instead, she said many of them refused to entertain an interview with her, highlighting the challenge of competing with a known ex-lawmaker whose connections in the district run deep: “I just feel like I’m not the anointed candidate right now.”

Still, she said she made inroads with builders and the construction industry, “because that’s my background; I can speak their language.”

Campaign manager Kami Dempsey-Goudie said the caucus was supposed to have removed Diaz as an officer after she disengaged from the group, but did not. When the secretary of state’s office reached out to inform the campaign that Diaz, as an officer, needed to report the caucus on her statements, “we ended up declaring them anyway just to cover our bases even though there was no official work.”

Dempsey-Goudie also said the amendments were not spurred by an ethics complaint filed with the office on March 20 by an individual who claimed Diaz did not disclose the sources of income.