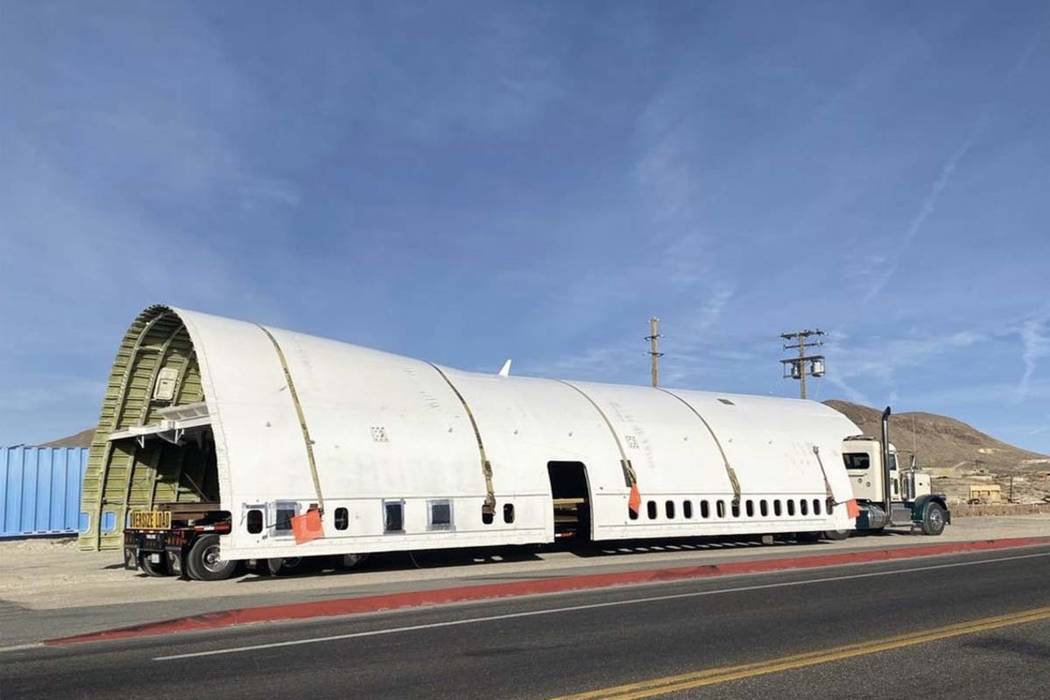 Part of the fuselage of a Boeing 747 used in Burning Man makes a pit stop in Tonopah, en route to Las Vegas.

The Las Vegas City Council will consider leasing city-owned downtown land to Zappos for an $8 million special events facility and public tavern, with an eye-catching centerpiece: The shell of a Boeing 747 airplane.

The proposal, dubbed The Gate Project 747, would be anchored by the fuselage of the massive aircraft featured at the Burning Man festival over the past four years, city documents show, putting an end to the mystery over what the Amazon-owned retailer had in store for the plane.

City lawmakers are expected to consider on Wednesday entering into a ground lease with Zappos through Jan. 1, 2024, the records show. The project would be located just east of the company’s headquarters, on the northeastern corner of Stewart Avenue and Seventh Street, on a vacant lot used for parking by Zappos employees.

It is scheduled to open in September if approved, according to a project plan embedded in city documents. Zappos bought the plane last August and first presented the project to community neighbors two months later.

“I just thought it was unique, something brand new to bring to tourists and residents, and a very exciting idea,” Mayor Carolyn Goodman said Monday. “This is going to be there as long as its succesful and (the plane) can be moved off — with planning of course.”

The lease would be for a nominal $10 annually, far less than the average value of two appraisals that have fair market rent at about $274,000 per year. But the city estimated the project would be worth it by providing 55 total direct, indirect and induced jobs while generating more than $1.5 million annually in new state and local taxes.

The direct and indirect economic impact, according to the city, would be more than $12 million.

Zappos and city officials expect the project to attract weddings, corporate parties, concerts, festival-type events and more. And the company has set sales goals to hold at least 10 large-scale events per year housing more than 3,000 guests in addition to daily tavern operations.

By constructing the project, Zappos indicated it wants to create an atypical event venue to stand out from the ordinary convention center or ballroom while appealing to Las Vegas Strip visitors who seek a “unique immersive experience” that is not a standard tavern, according to documents.

The company also expects to generate publicity by bringing to downtown the well-known Burning Man art piece now stored in five parts at the Las Vegas Motor Speedway, documents show. If the project is approved by city lawmakers, Zappos said it will prepare the downtown land to relocate the 747 as early as May and start to reconstruct the plane by no later than July.

Zappos also expects to buy ground support equipment and retrofit it to serve the fuselage, offering examples such as Sky Chef-style trucks redesigned as food trucks, and stair trucks for entering and exiting plane doors.

Two temporary shade structures, inspired by hangars, could be built north and south of the 747, according to documents, and would be based with shipping containers retrofitted for food and beverage service inside and outside the structures.

A message to Zappos seeking comment Monday was not immediately returned.

In addition to Goodman, at least one other council member is supportive of the project: Councilman Cedric Crear, according to company documents embedded in city records.