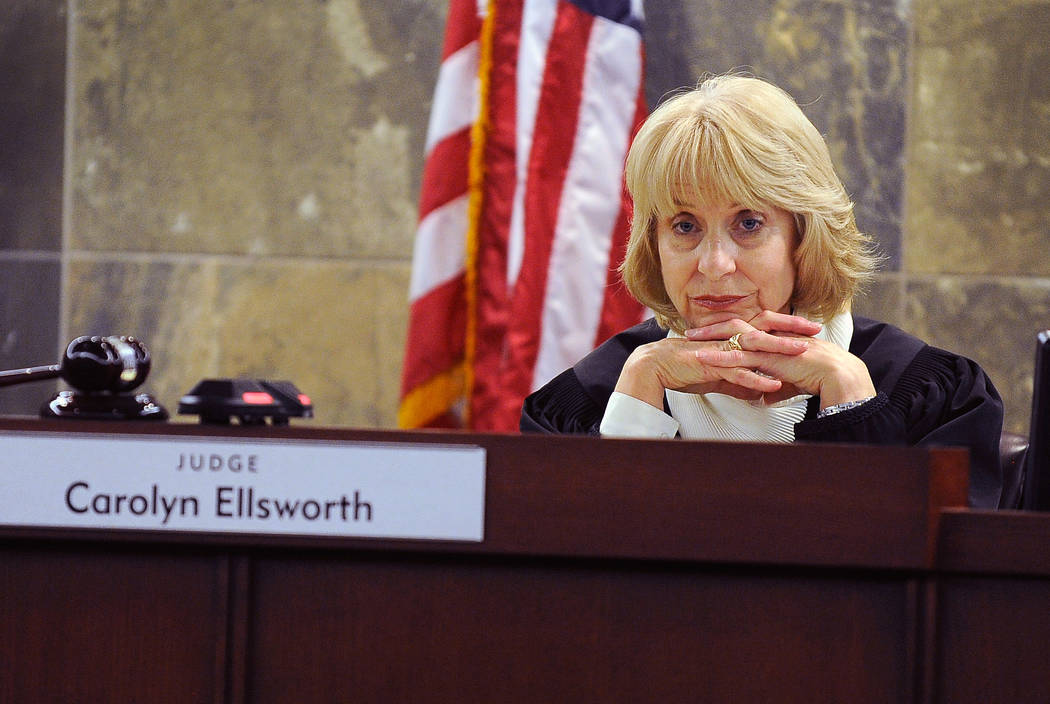 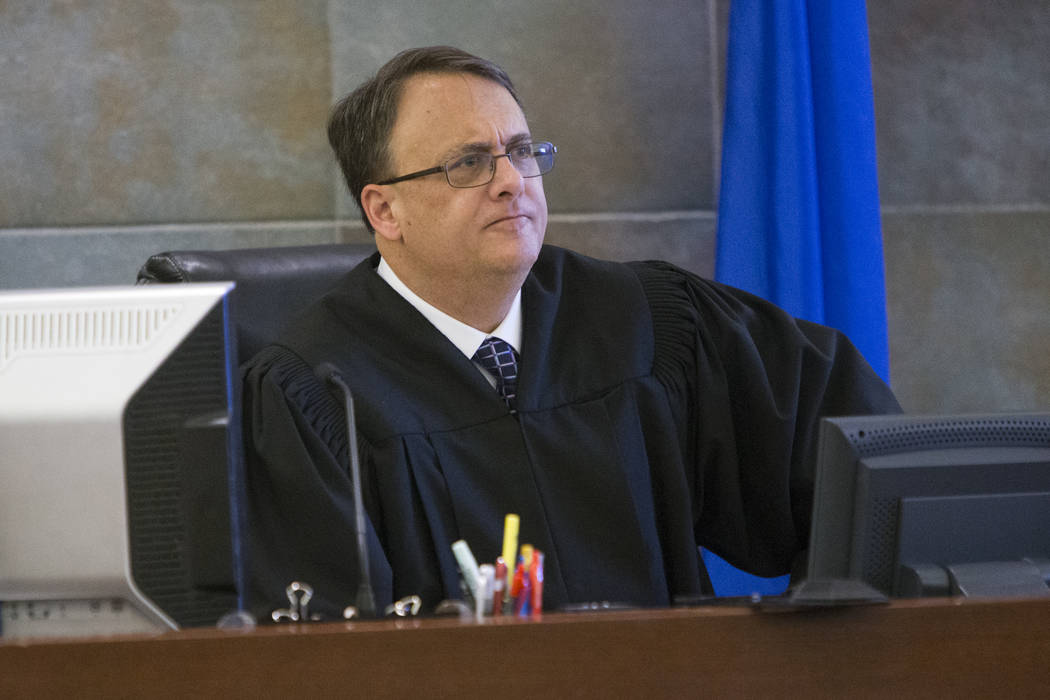 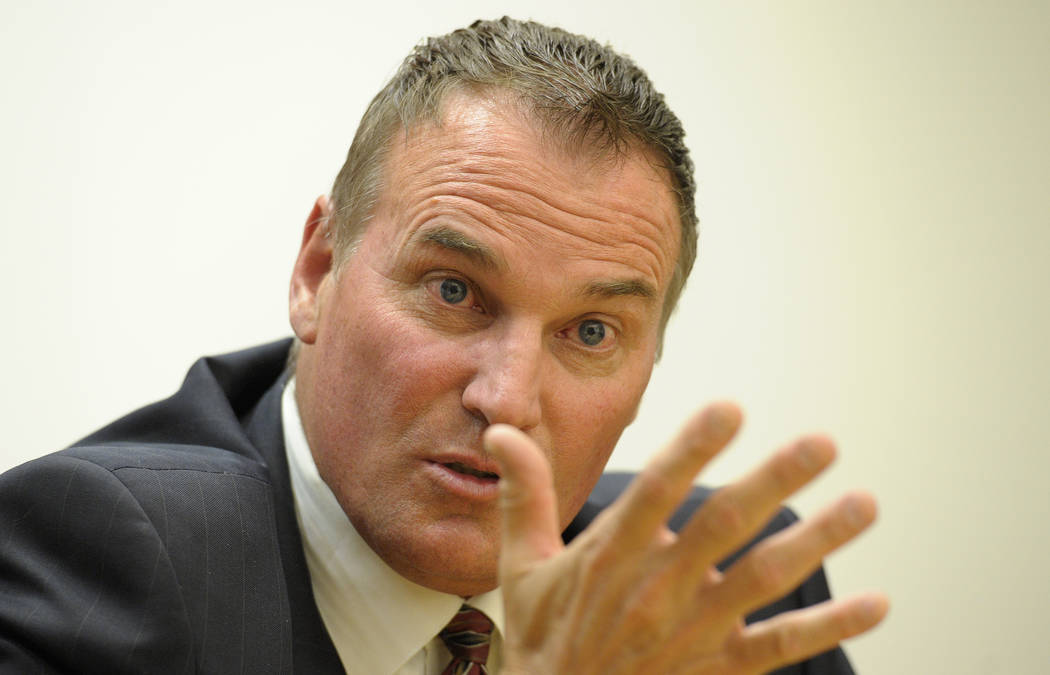 William Kephart, then a candidate for District Court, speaks with the Review-Journal editorial board on May 15, 2014. (Mark Damon/Las Vegas Review-Journal) 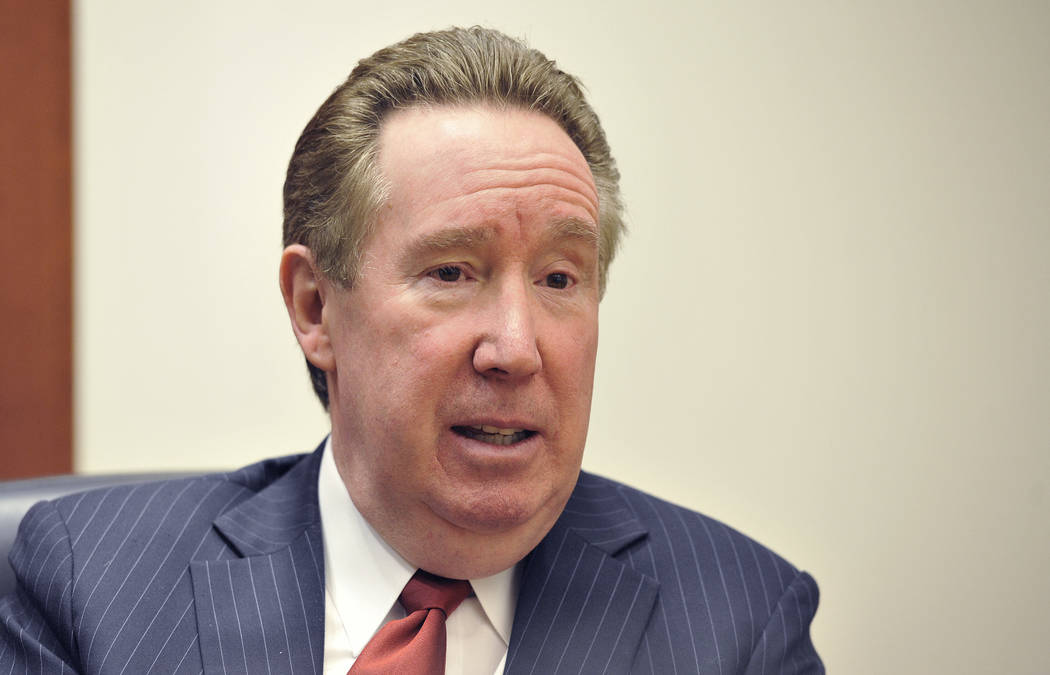 Clark County lawyers raised the most concern about four district judges in the 2019 Judicial Performance Evaluation, and they recommended voting two of them out of office.

In the survey, sponsored by the Las Vegas Review-Journal, 44 percent of responding attorneys said Carolyn Ellsworth should be retained, while 46 percent thought Ron Israel should keep his seat.

Ellsworth, one of 29 district judges evaluated, said she did not plan to run for re-election in 2020, a decision she made before learning the survey results.

“Maybe there are other judges who are smarter than I am and can do it in less than 12 hours a day,” said Ellsworth, who was appointed in 2011. “That’s how I do it. But it does take a toll on you the longer you do it.”

Fifty-two percent of lawyers favored retention for Richard Scotti, and 55 percent wanted William Kephart to stay on the bench. Kephart’s retention score was 4 percentage points below the next district judge’s score.

On a five-point weighted scale, Israel and Ellsworth received summary scores of 3.2 — the lowest in Clark County District Court — for the individual questions regarding their performance. Scotti and Kephart received scores of 3.4 and 3.5, respectively.

One lawyer wrote that Denton, with an 87 percent retention score, was “smart and clear in his rulings” and “a model of proper judicial temperament.”

Wiese, who also received an 87 percent score, was described as “very fair and thoughtful” by one lawyer, who added that “in his courtroom everyone gets a meaningful opportunity to be heard.”

Williams, whom 90 percent of respondents wanted to retain, was described by one lawyer as “a very insightful and diligent judge” and “a legal purist who appreciates well-researched legal briefs and shows courtesy and respect to all who appear before him.”

Three recently appointed judges were excluded from the survey. All District Court seats are on the ballot next year.

Ellsworth said she was “flabbergasted” by some of the survey responses, and she criticized some negative comments about her as not being constructive.

One commenter wrote, “Terrible temperament and arrogance are not good characteristics for a judge.”

In a Review-Journal interview, Ellsworth said she appreciates lawyers who practice before her. And she said she bakes individual cakes for graduates of the county’s drug court, which she oversees.

“It’s really important that judges are aware of any kind of bias, whether it’s a conscious bias or unconscious bias,” she said. “Tell me what the circumstance was that they saw that led them to think that. … I really want them to say something constructive for the judges that the judges can use.”

Attorneys took issue with how Israel managed his criminal caseload, with one writing that he “does not follow the law or does not appear to understand it” and “has a dim view of criminal law.”

Israel joined the bench in 2011 after 30 years of practice in civil litigation. He acknowledged in an interview that he encountered a “learning curve” with criminal cases, and he said he works to thoroughly review criminal case law.

Twenty-three percent of respondents said they strongly disagree or disagree that Israel was successful at keeping court business moving appropriately, while 53 percent agreed or strongly agreed with the statement.

He said he has overseen 100 trials in nine years, and only one of those cases was reversed.

“I certainly appreciate the comments,” he said. “I look at the comments to improve. I want to do my best. … I review them and take them to heart and learn from them. This isn’t a popularity contest for attorneys. I hold them accountable, and I move cases along.”

Israel added that he was “disappointed” with his retention score. He reiterated that he made sure attorneys were prepared when they appeared before him, “and maybe that’s not popular.”

In February 2018, the Nevada Supreme Court ruled that Scotti violated the First Amendment when he barred the Review-Journal from reporting on the redacted autopsy report of a victim from the Oct. 1, 2017, mass shooting.

This September, the high court overturned a child rape conviction and life sentence, saying that Scotti tainted the jury pool when he swore and tossed a pocket Constitution at a courtroom wall.

At the time of the second ruling, Scotti told the Review-Journal that he regretted his actions and respected the jury system.

In an interview about his survey results, Scotti said that at the time of the child rape trial he had just learned that his father was diagnosed with dementia and was dying. Scotti said he was distraught over the news.

“I didn’t intend to throw it,” he said. “I was careless, though, and it slipped out of my hand. I regret what happened. I should have handled it differently. I shouldn’t have raised my voice to the juror.”

Despite those rulings, Scotti told the Review-Journal: “I believe I have a very good judicial temperament.”

One lawyer wrote that Scotti, who was elected in 2014, was “in the range of being a good judge, but not being one of the best judges.”

Sixty-six percent of the survey respondents found that he was attentive to the matter at hand, while 59 percent found him successful at keeping court business moving appropriately.

“I give everybody a full opportunity to be heard,” Scotti said. “Some view that as not controlling my courtroom and allowing attorneys to ramble, but I’m a public servant and it’s my job to do the right thing, and it’s important to listen to everybody, even if it means some attorneys need to wait a little bit longer in the courtroom.”

A career prosecutor before he was elected a Las Vegas justice of the peace in 2010, Kephart acknowledged that he faced a hurdle with overseeing civil matters when he was appointed to the District Court bench in 2015.

One attorney wrote that civil matters were “not his strong suit,” which meant that he “drags out cases unnecessarily and forces represented parties to incur additional attorney’s fees and costs.”

Others pointed out that Kephart came under fire in 2017 for leading the prosecution of Fred Steese, who was exonerated after spending 21 years in prison for a murder he did not commit.

One lawyer wrote that “Kephart made no effort to remedy his prior error. He uses this same illegal approach to the law and bench that he did as a prosecutor, and voters should not re-elect him.”

When asked why voters should keep him on the bench, Kephart said, “I’m from here. I grew up here. I watched this community change. I really care about Las Vegas. This is my home. The people in this community deserve a good bench.”