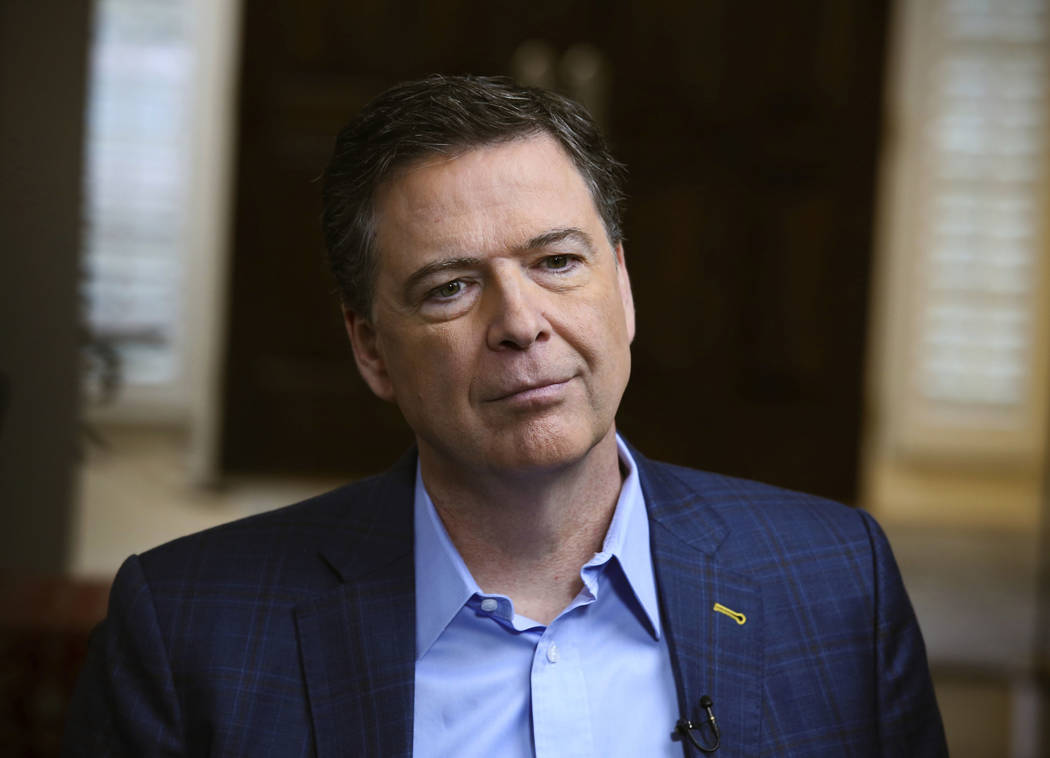 In this image released by ABC News, former FBI director James Comey appears at an interview with George Stephanopoulos that aired during a primetime "20/20" special on Sunday, April 15, 2018. Comey's book, "A Higher Loyalty: Truth, Lies, and Leadership," was released Tuesday. (Ralph Alswang/ABC via AP)

Overnight Comey had become the left’s lanky lawman hero who stood up to the sharp-elbowed president’s efforts to get him to back off the probe into Russian interference in the 2016 election.

But a lot has changed in 11 months.

As Comey’s book, “A Higher Loyalty: Truth, Lies and Leadership,” hits bookstores, reading devices and the New York Times best-seller list, high-profile Democrats interviewed by the Review-Journal said they continue to see Comey as a deeply flawed FBI chief. And while others might be buying Comey’s book, these partisans aren’t buying Comey’s self-portrait.

Like many Clinton supporters and some legal observers, Davis faults Comey’s decision to announce at a July 2016 news conference that the FBI would not recommend criminal charges against the former secretary of state for sending sensitive emails via a private server in her home. While eliminating that cloud hanging over Clinton’s Democratic presidential bid, he also described her behavior as “extremely careless.”

“He put the stink on her,” Ellen Tauscher, undersecretary of state under former President Barack Obama, said of the press conference.

Later, Comey did it again.

Davis, a frequent Fox News commentator, made the case in his book that Comey’s Oct. 28 letter informing Congress that he was reopening the Clinton investigation because of emails found in the laptop of Anthony Weiner, the disgraced congressman then married to Clinton aide Huma Abedin, led to a precipitous drop in Clinton’s poll numbers.

He has developed a more nuanced view of the former FBI director since then, but he’s still no fan.

“I thought he showed fortitude in standing up to Donald Trump” by refusing to pledge loyalty or drop an investigation into former national security adviser Michael Flynn, but “it doesn’t change my mind that he was a dangerous renegade,” Davis said.

“I don’t think he’s evil like (late FBI chief J. Edgar) Hoover, but he had the sense of himself, the narcissism of J. Edgar Hoover,” he added.

The ghost of Hoover seems to also have colored other people’s impressions of Comey.

Trump clearly was suspicious of Comey’s motive for remaining behind at a Trump Tower intelligence briefing to inform the president about a dossier written by a former British intelligence operative that alleged the Kremlin had been supporting Trump for years. It also contained an unverified account that the Russians had observed — and possibly videotaped — Trump with prostitutes in a Moscow hotel room in 2013.

Comey writes that Trump seemed to fear that the FBI director was “pulling a J. Edgar Hoover” by “dangling the prostitute thing over him to jam him, to gain leverage.”

But author Matt Taibbi, writing in “Rolling Stone,” says that Comey’s insistence that his actions were all aboveboard sometimes ring hollow.

“In denying that he was angling to be a modern Hoover, he more often than not seems to be confirming it,” he observed.

Before Trump won the 2016 election, a number of high-profile Democrats had voiced their dissatisfaction with Comey. Senate Minority Leader Chuck Schumer said he found Comey’s treatment of Clinton “appalling,” and announced that he had no confidence in the FBI chief.

And in a May 2017 letter that outlined reasons for removing Comey, Deputy Attorney General Rod Rosenstein cited top Justice officials, one Democrat and one Republican, who criticized Comey’s conduct as out of line.

‘Something for everybody to hate’

But Comey’s firing and subsequent hints that Trump may have been trying to derail the Russia influence investigation made him something of a political pariah to both sides, observed Loyola Law School professor Jessica Levinson.

“He is like the embodiment of America 2018,” she said. “There’s something for everybody to hate about him.”

With his recent remarks that Trump is “morally unfit to be president,” Comey has leavened the anger from the left.

But not all Democrats are ready to forget.

Citing Comey’s copious use of the lawyerly word “maybe,” Merrill suggested, “‘Maybe’ he should have just spoken to (former Attorney General Loretta) Lynch about his concerns of bias instead of holding a press conference,” an apparent reference to Lynch’s decision to distance herself from the probe because she had met with Bill Clinton on a Phoenix tarmac during email investigation.

“I’d posit that ‘maybe’ James Comey has nothing against Hillary Clinton,” Merrill said.

But the Democrats’ distaste for Comey shouldn’t be confused with sympathy for Trump’s 2016 firing of the nation’s top lawman, Tauscher said.

“When Donald Trump did it,” she said, “he did it to obstruct justice.”