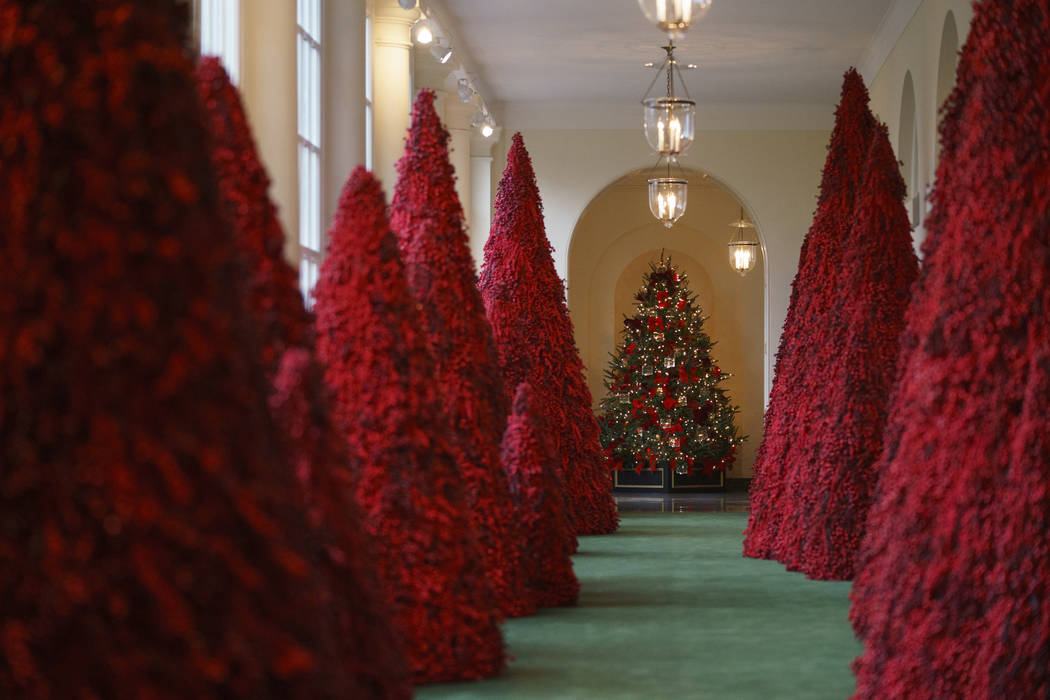 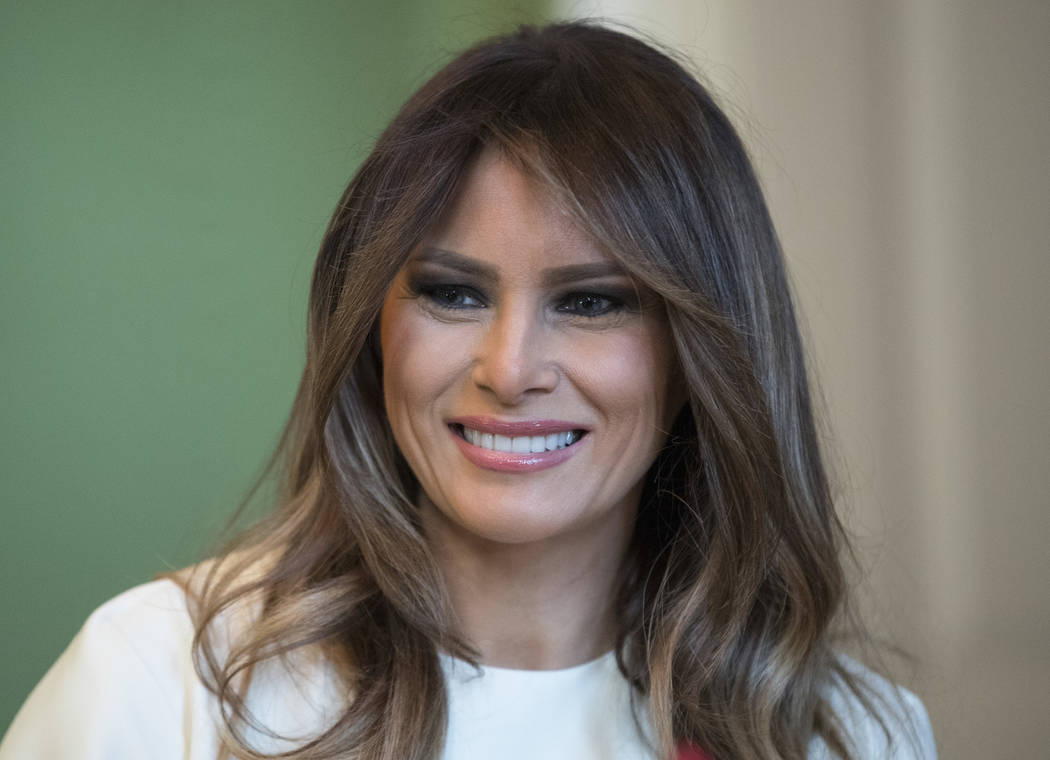 In this Monday, Nov. 27, 2017 file photo, First lady Melania Trump smiles as she visits with children in the East Room of the White House in Washington. (AP Photo/Carolyn Kaster, File) 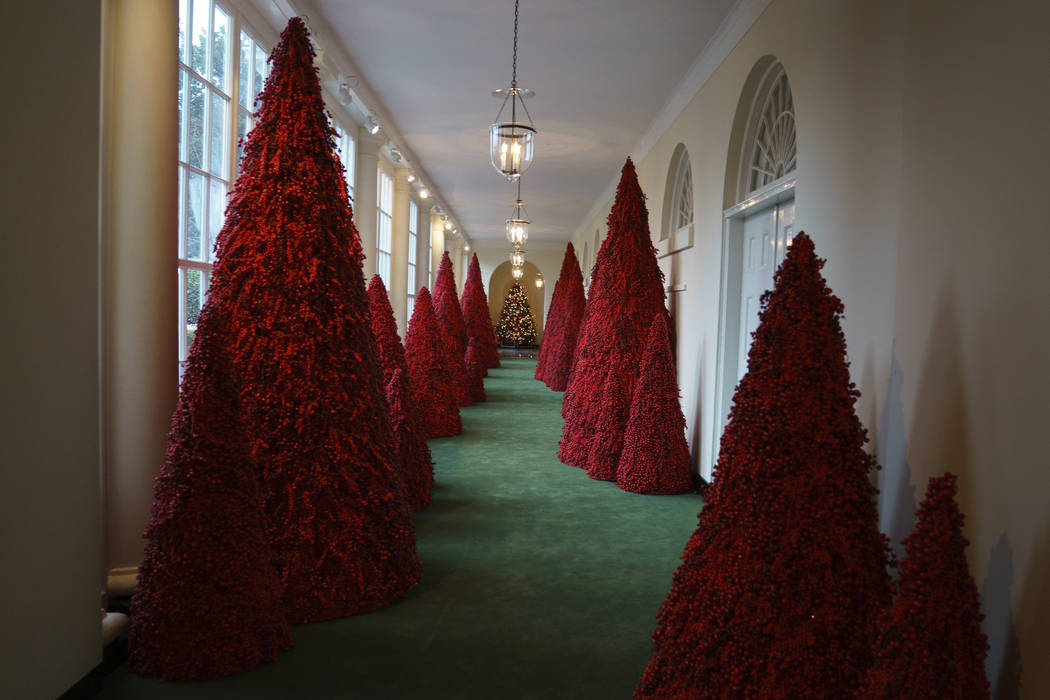 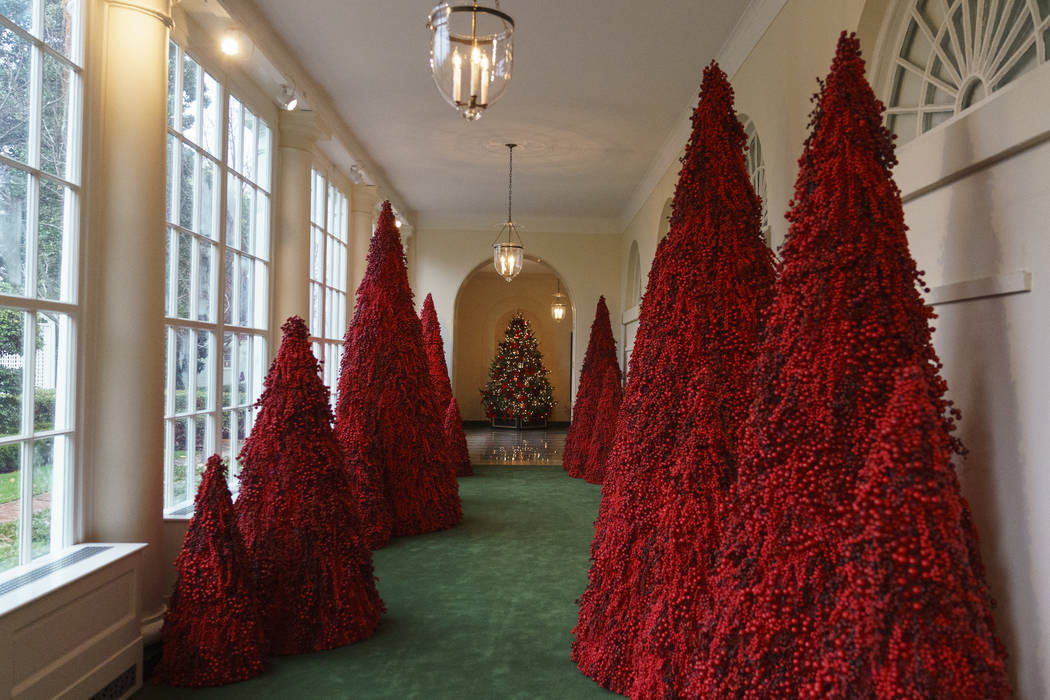 WASHINGTON — Melania Trump’s cranberry topiary trees may have left some of her critics seeing red, but they turned out to be a Christmas hit — one of several new ideas the Trumps introduced this holiday season.

In a four-week stretch of 21 holiday parties, the president also did fewer official photo ops and largely froze out the press. But in time-honored tradition, though, politicos still used the celebrations to squeeze in some last-minute deal-making.

Many of the soirees unfolded under the threat of a partial government shutdown that took effect late Friday.

A stalemate with Congress over Trump’s demand for $5 billion to build a wall on the U.S.-Mexico border forced Trump to delay his plan to shift the merrymaking to his Florida estate on Friday. He remained in Washington while his wife and son, Barron, flew to Palm Beach without him.

The red trees featured on a green carpet along the East Wing colonnade turned out to be quite the attraction: Pedestrian traffic jams formed as Trump’s many party guests clamored to be photographed in front of the unusual holiday landscape.

“Every single person that came through the East Wing stopped for a photo,” said conservative commentator Paris Dennard, a recent guest.

Armstrong Williams, another conservative commentator, tweeted photos of himself posing along the red-tree-lined hallway during a reception.

“I thought it was just classy,” he said. “Great for photos.”

Trump and the first lady on Wednesday hosted the final two parties of the season, where guests feasted on lamb chops, shrimp and potato latkes along with a dessert bar that included lemon tart, coconut cake and Christmas cookies. Champagne and egg nog flowed freely.

Guests said the affairs amounted to festive reunions largely devoid of overt political talk while folks who’d been out of touch spent time catching up.

He added via email that guests talked about “how good it is to have the White House occupied by a man and woman who love this country and the importance for Conservatives to be ‘Happy Warriors’ as President Reagan told us.”

“Having a great time at the Whitehouse (cq) Christmas Party!” said the caption former White House chief of staff Reince Priebus added to a photo he tweeted of himself and outgoing Chief of Staff John Kelly. Kelly succeeded Priebus just six months into the new administration. Now Kelly is set to depart at the end of December after a topsy-turvy 18-month stint as Oval Office gatekeeper.

Largely absent from the festivities this year was the traditional opportunity for guests to have a picture taken with Trump and his wife, a time-consuming process that requires the president and first lady to stand for hours, grinning, posing and making small talk with hundreds of guests, some of whom they hardly know.

Trump retained the photo tradition for members of the U.S. Secret Service, law enforcement and the military, as well as staff who work in the residence, according to a White House official who declined to be identified discussing details of the private receptions.

Except for a pair of Hanukkah receptions in the East Room, many of the holiday receptions took place in the Grand Foyer, the open area on the State Floor across from the Blue Room.

The parties had a certain rhythm: A tuxedo-clad Trump and the first lady, who has worn a variety of white, black and green gowns, descended the red-carpeted staircase hand-in-hand from their second-floor residence. Trump made roughly 10 minutes of welcoming remarks before inviting his wife to speak. They then mingled and posed for some informal photos before going back upstairs.

Williams said he saw “warmth” between the couple.

The parties also offered job-searching opportunities for some of those on the hunt.

Trump, for example, needs to find a new Interior secretary and he’s got a class of soon-to-be unemployed members of Congress to choose from if he wants.

Rep. Jeff Denham, R-Calif., who lost his re-election, is one such member said to be interested in the job. Denham attended Saturday’s Congressional Ball at the White House.

Left off the holiday schedule was the annual party for the White House press corps. Trump’s sour relations with journalists who cover him and the administration peaked last month after the White House revoked a CNN correspondent’s press pass. But the White House quickly reinstated the pass after a federal judge ordered it.

As an alternative, the White House said it has been arranging tours for reporters and their families who have asked to see the decorations.

4
School Board president calls bid to oust her ‘retaliation’