Nevada Sens. Jacky Rosen and Catherine Cortez Masto took to the Senate floor this week to argue that money for states, cities and tribal governments should be included in a final compromise bill being hammered out between congressional leaders and Trump administration officials.

“Without action, states across the nation will face consequences that could have a devastating impact on countless lives,” said Rosen, D-Nev., in her Senate floor speech.

Reps. Dina Titus, Susie Lee and Steven Horsford say they will argue more aid is needed to help Nevada and cities like Las Vegas, Reno and Henderson — all hard hit due to shutdowns in the gaming and hospitality industries.

“We know that addressing state and local budget shortfalls puts Nevada, and our nation, on the quickest path to recovery,” Lee wrote in an op-ed published in the Review-Journal in June.

“Now it’s a matter of Congress passing these common-sense solutions. Whether you lean to the left, to the right or somewhere in between, we all want to get back to the lives we knew,” Lee wrote.

Rosen and Cortez Masto, D-Nev., stressed the urgency to act to help states, noting the recent special session called by Gov. Steve Sisolak to deal with a $1.2 billion shortfall in the state budget caused by the coronavirus business shutdowns.

“At kitchen tables all over the country, including Nevada, families are sitting down and they are pouring over their budgets,” Cortez Masto said. “Too many of them are trying to stretch that budget,” she added, noting that states, local and tribal governments “are trying to do the same thing.”

Senate Majority Leader Mitch McConnell, R-Ky., said Wednesday he remains opposed to the “Democrats’ demand for $1 trillion more dollars to hand out to state and local governments even though they’ve only spent one-fourth of the money we sent them in March.”

The House and Senate approved the CARES Act in March, signed by President Donald Trump, that provided $500 billion to states and larger cities to help purchase equipment and fund health care operations as the pandemic swept across the nation.

Since then, the National Governors Association and the U.S. Conference of Mayors have sought nearly $1 trillion more in aid as property, income and sales tax revenues, and fees, have plummeted as the economy collapsed due to COVID-19 infections and deaths.

In addition to Sisolak, mayors of Las Vegas, Henderson and Reno have urged Congress to provide more help as cities try to balance reopening stores, restaurants and shops with health protocols for pandemic prevention.

A subsequent $3 trillion House bill passed in May includes the money for states, cities and tribal governments. That bill passed mostly along party lines.

A smaller $1 trillion Senate proposal, unveiled by McConnell, includes no additional aid for states and cities. McConnell said he would prefer aid go directly to families and small businesses than to state and local governments.

Nonetheless, McConnell has conceded that he does not have the votes to pass a GOP bill in the Senate, due to divisions within the caucus and objection from conservatives against more spending that would add to the debt.

Lawmakers from both parties say a deal remains an uphill battle. They hope a compromise is reached so that votes can be held next week to pass a bill that shores up unemployment benefits, prevents evictions and foreclosures and provides more funding for small businesses.

Trump has suggested to reporters that he would explore an executive action to extend those benefits if Congress fails to pass legislation.

Rosen said that in addition to fighting the coronavirus, “Nevada now must also deal with an alarming budget shortfall, exacerbated by a struggling economy that relies on tourism, and a massive drop in tax revenue.”

“Many states across the country are in identical or similar situations. Red states and blue states are facing this very challenge, due to no fault of their own,” Rosen said. 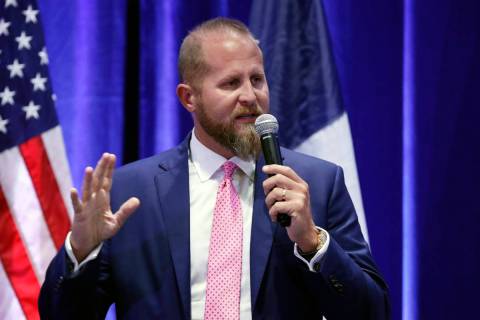