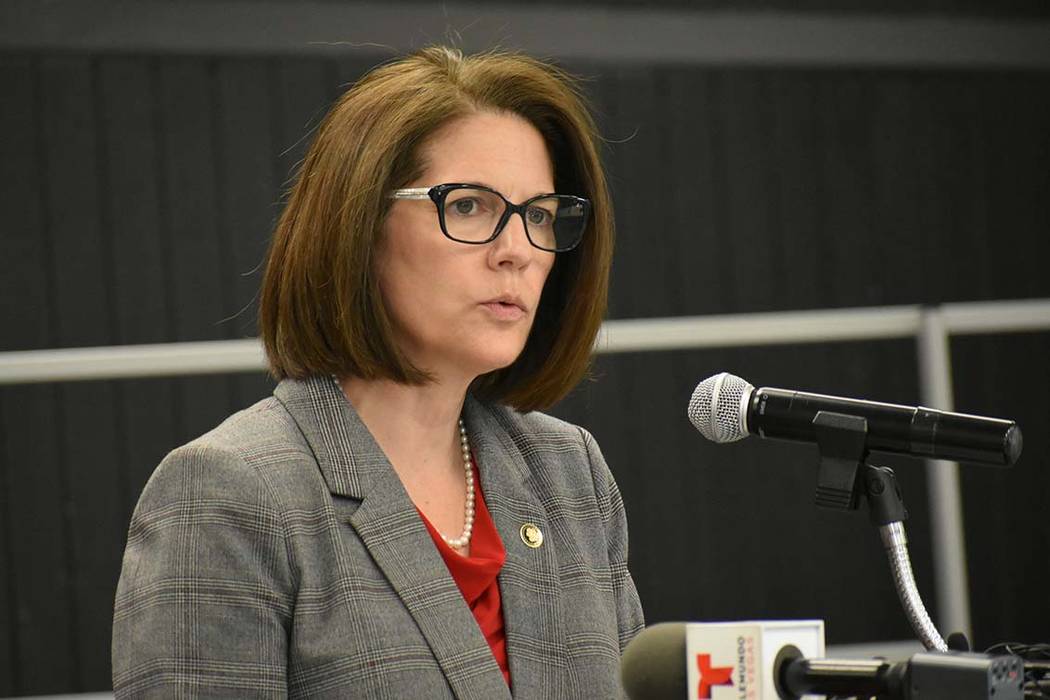 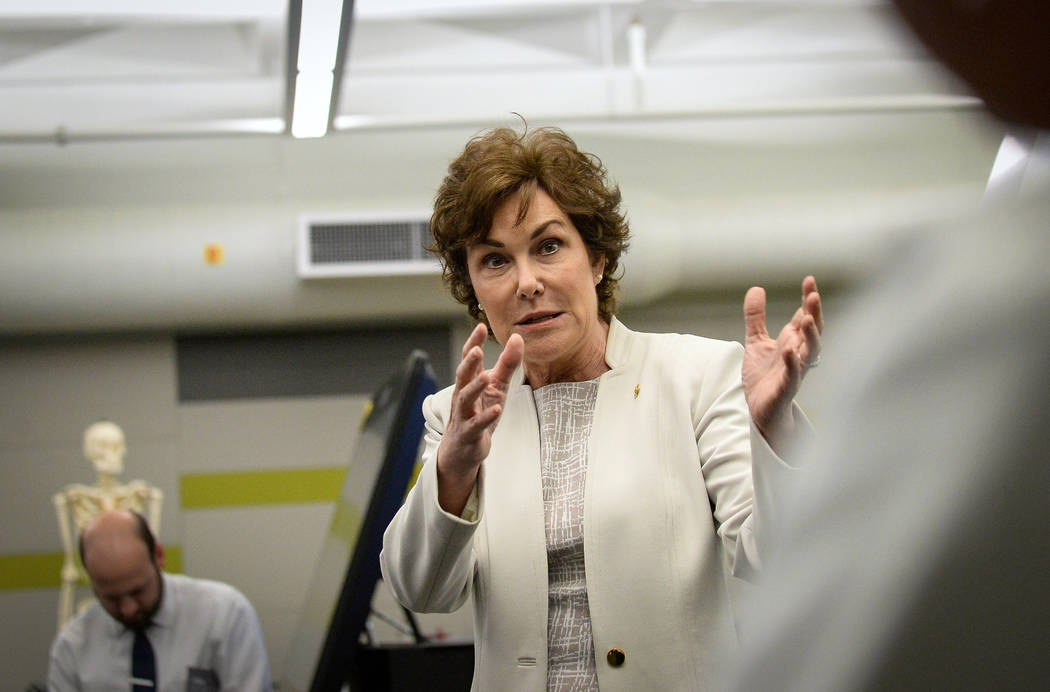 Sen. Jacky Rosen, D-Nev., speaks to a room of students and faculty members as she visits the UNLV School of Medicine in Las Vegas, April 15, 2019. (Caroline Brehman/Las Vegas Review-Journal) @carolinebrehman

WASHINGTON — Nevada senators said Monday they plan to testify against the health risks and dangers of transporting and storing nuclear waste near Las Vegas when a Senate panel begins consideration of legislation to resume licensing on the Yucca Mountain repository this week.

Sen. Catherine Cortez Masto and Sen. Jacky Rosen, both Nevada Democrats, are scheduled to appear before the Senate Committee on Environment and Public Works on Wednesday.

The hearing was scheduled to discuss legislation that would streamline licensing of the Department of Energy’s application to build a permanent waste facility in Nevada.

The two Nevada lawmakers said last week that Congress must respect the will of the state and its voice as the federal government tries to store waste within its boundaries over its objections.

In a statement, the senators said “scientists have already confirmed Yucca Mountain is unsafe and unfit for nuclear waste storage.”

Chairman John Barrasso, R-Wyo., said the bill would end the 30-year impasse over permanent storage of nuclear waste generated by power plants and U.S. Navy vessels, which is currently stored on sites in 39 states nationwide.

Proponents of Yucca Mountain point to scientific studies conducted by specialists who found the site safe for storage of 70,000 metric tons of spent fuel rods and other radioactive material from power plants.

The Senate bill mirrors one passed by overwhelmingly bipartisan majority in the House in 2017. That bill died for lack of action in the Senate, but another bill is expected to be reintroduced in the House as companion legislation to Barrasso’s bill.

Bills with various other programs and proposals are also expected as Congress looks to take care of the stockpile of waste around the country.

A bill being drafted by Rep. Mike Levin, D-Calif., would change current law and streamline efforts to implement interim storage to expeditiously clean up dangerous radioactive materials at decommissioned power plants, such as the closed San Onofre Nuclear Generating Station in Southern California.

Levin is expected to file his bill, with support from other California lawmakers, soon, a congressional aide said. That legislation would allow the quick removal of nuclear waste along the shoreline and sent to temporary storage site.

Alexander and Feinstein have yet to file legislation.

Congress in 1987 designated Yucca Mountain as they nation’s site for permanent storage of nuclear waste from power generating plants. The federal government has spent $19 billion to study and prepare the site.

The Energy Department filed an application to construct a site and licensing hearing began, only to be halted in 2012 when the Obama administration pulled funding for the process to continue.

Although private contractors want to store the waste at sites in Texas and New Mexico, current law allows only the federal government to take control and manage the radioactive material.

Barrasso’s bill would push implementation of interim, or consolidation storage, but only until Yucca Mountain is developed to accept the waste.

Without addressing nuclear waste storage, industry officials are concerned it could stymie efforts to bring a new generation of reactors online.

Nevada officials are concerned that opening Yucca Mountain, with the buildup of nuclear waste stockpiled around the country, would create a steady stream of waste traveling through the state and stored at a site located in an active seismic zone.

Former Sen. Harry Reid, D-Nev., who blocked federal efforts to open Yucca Mountain, suggested during a recent interview with the Review-Journal that waste stored on site at power plants should be buried on site.

Rep. Dina Titus, D-Nev., and Cortez Masto, have filed bills in the House and Senate that would require states and local communities to give consent before storage facilities could be built. The legislation would require approval by a state, local and tribal leaders to build a facility.

A similar bill by Titus died in the House in 2017.

Since then, Democrats have taken control of the House and elected Rep. Nancy Pelosi, D-Calif., as speaker. Pelosi has long opposed efforts to open Yucca Mountain as a nuclear waste repository.