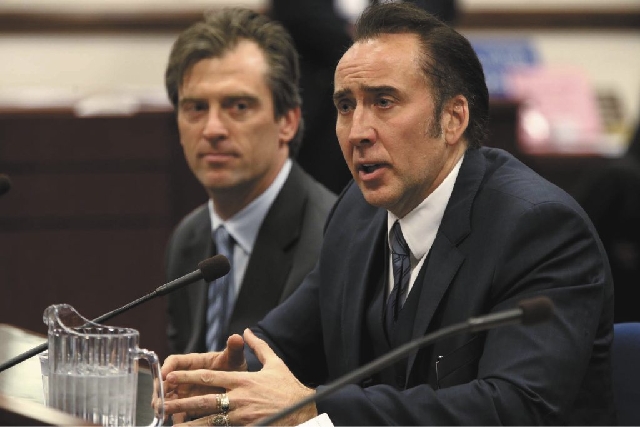 Actor Nicolas Cage testified in support of a bill proposing tax incentives to filmmakers at the Legislative Building Carson City, Nev. on Tuesday. Proponents of the measure say it will bring jobs and revenue to the state. Cage's agent, Michael Nilon, is at left. 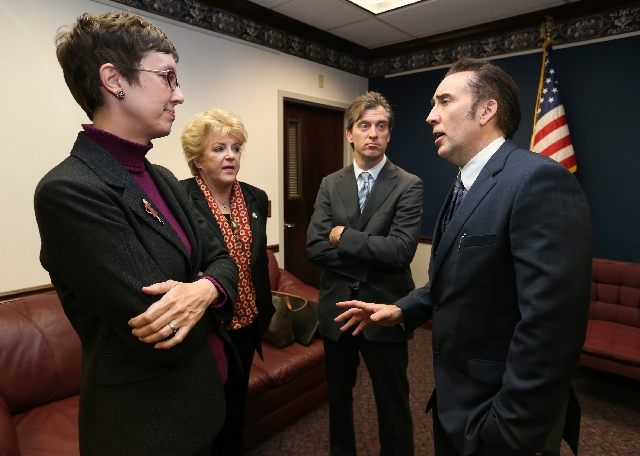 From left, Nevada Assemblywoman Heidi Swank, D-Las Vegas, Las Vegas Mayor Carolyn Goodman, Michael Nilon and actor Nicolas Cage talk at the Legislative Building Carson City, Nev. on Tuesday. Goodman, Nilon and Cage testified in support of a measure that would offer tax incentives to filmmakers in an effort to bring jobs and revenue to the state.

“Movies can introduce more people around the globe to Nevada,” Cage told members of the Senate Finance Committee. “We are close to Hollywood. It would be very easy to bring folks here. If we are successful, how about Nevada being home to one of the premier movie studios in America?”

They endorsed Senate Bill 165, sponsored by Sen. Aaron Ford, D-Las Vegas, which would offer as much as $35 million a year in tax incentives to companies that film in Nevada.  A variety of credits would be offered, including 17 percent on employee salaries and benefits.

Only Carole Vilardo, president of the Nevada Taxpayer Association, spoke against the bill, saying that tax incentives in Louisiana have not brought a positive return to that state.

“I believe this bill is on the fast track to move out,” added Vilardo, noting the amount of incentives the bill offers would equal a 1 percent pay increase for state employees.

But Finance Committee Chairwoman Debbie Smith, D-Sparks, denied there is a special push to pass the bill. She said she will consider Vilardo’s suggestion to limit the incentives to a one- or two-year pilot program to let the state assess whether the return is positive.

No action was taken on the bill, which must pass out of the Senate and Assembly by adjournment on June 3. A similar bill died in the 2011 session.

Cage’s appearance produced no special stir among the committee. The 49-year-old actor has a receding hairline and is no longer movie star handsome. In his suit, he could have passed for one of the lobbyists who attend the Legislature every day.

But Cage did bring a kind of local star power to the debate. Now a Las Vegas resident, he won an Academy Award in 1995 for his role in “Leaving Las Vegas.”

At one point in the hearing, Sen. Ben Kieckhefer, R-Reno, cracked that he would love to see “National Treasure 3 filmed in Nevada,” a reference to a sequel to two of Cage’s popular action films.

Goodman said she frequently is approached by producers who want to film in Nevada but instead go to states that offer incentives.

“The bottom line is determining whether we are willing to take the risk,” Ford added. “Nevada should be the top destination for films. We are letting other states pass us because we don’t offer film incentives.”

During the hearing, producers noted that the TV show “Vegas” is filmed in New Mexico and that a movie about Las Vegas is being made in North Carolina.

Louisiana offers a 30 percent tax credit. Forty-four movies and nine TV series were filmed in the state in 2011. But Gov. Bobby Jindal in March announced a plan to reduce the incentives offered companies.

The Nevada Policy Research Institute, a Las Vegas-based conservative think tank, released a copy earlier this year of the Louisiana Legislature’s fiscal analysis of its film tax credit program. It found a $48 million net loss for the state in 2011 from the credit program.

But Cage contended tax credits have worked in Louisiana.

“Just try it,” Cage said. “A year at a time even. I think we would be very happy with the results.”