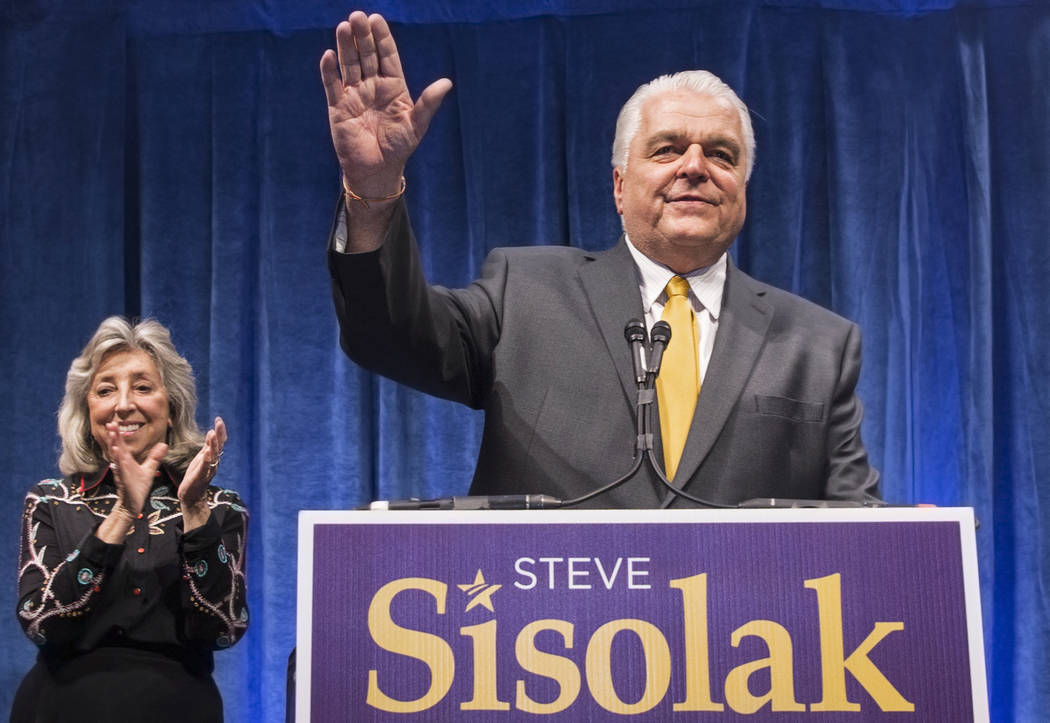 Steve Sisolak speaks to supporters at a watch party after winning the gubernatorial Democratic primary at the Aria on Tuesday, June 12, 2018, in Las Vegas. Benjamin Hager Las Vegas Review-Journal @benjaminhphoto 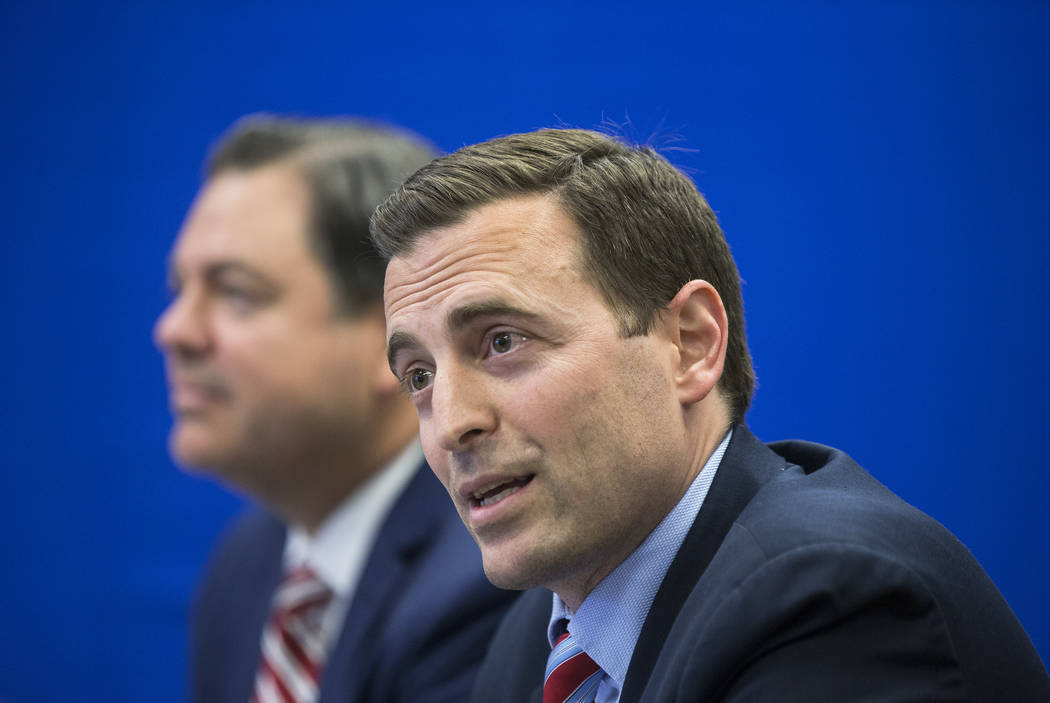 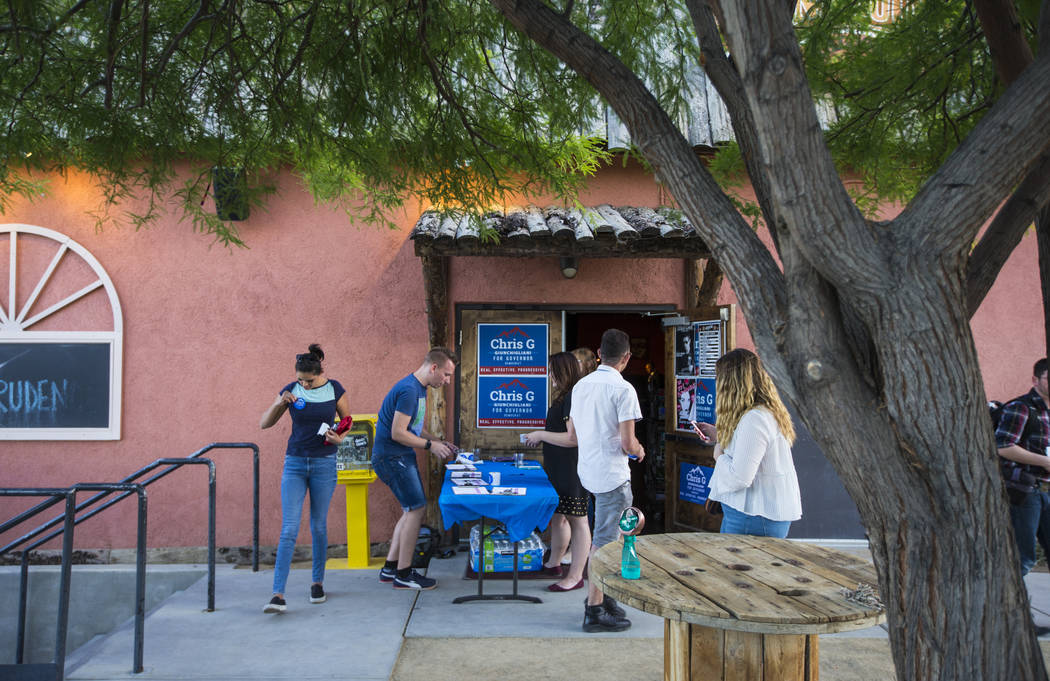 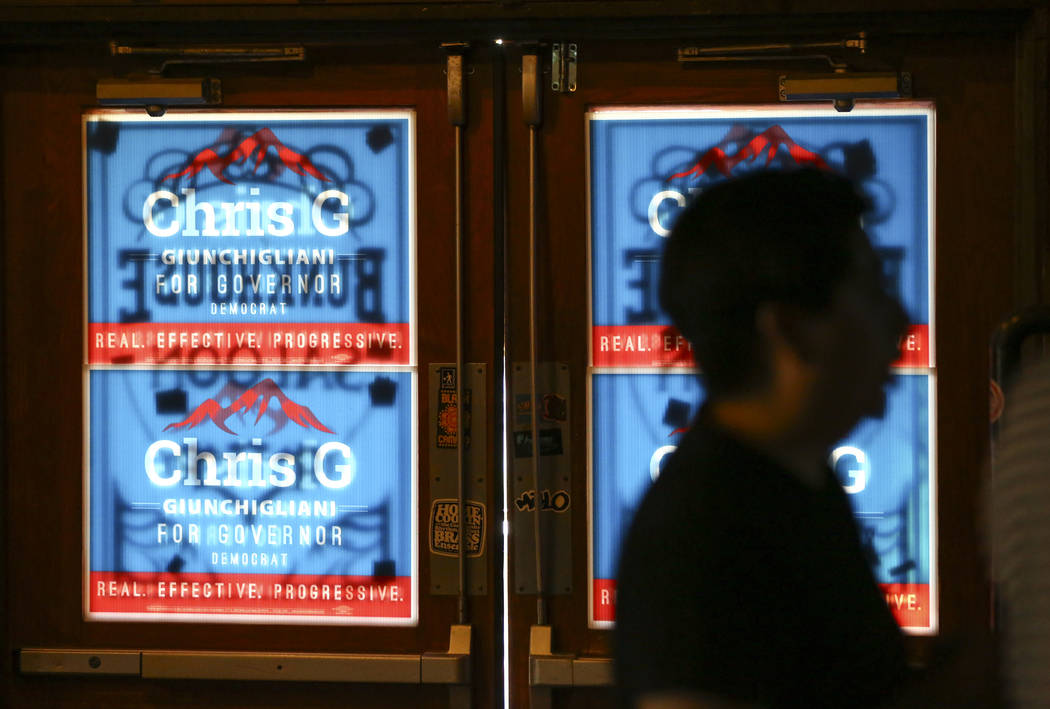 An attendee is silhouetted at the start of watch party for Clark County Commissioner Chris Giunchigliani, a candidate in the Democratic primary for Nevada governor, at Bunkhouse Saloon in Las Vegas on Tuesday, June 12, 2018. Chase Stevens Las Vegas Review-Journal @csstevensphoto 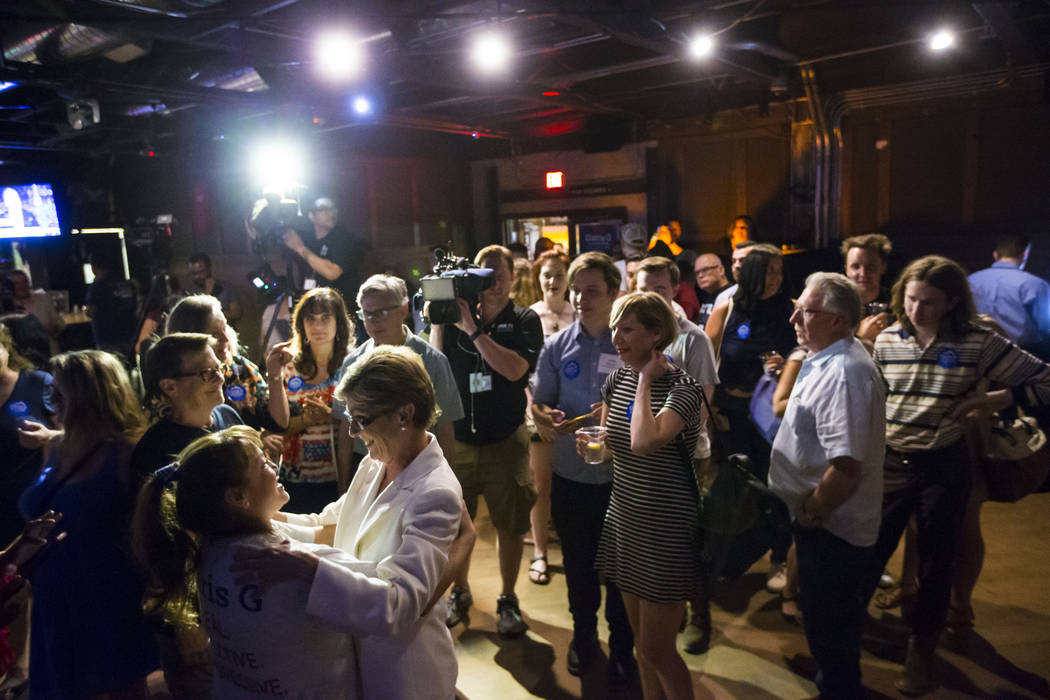 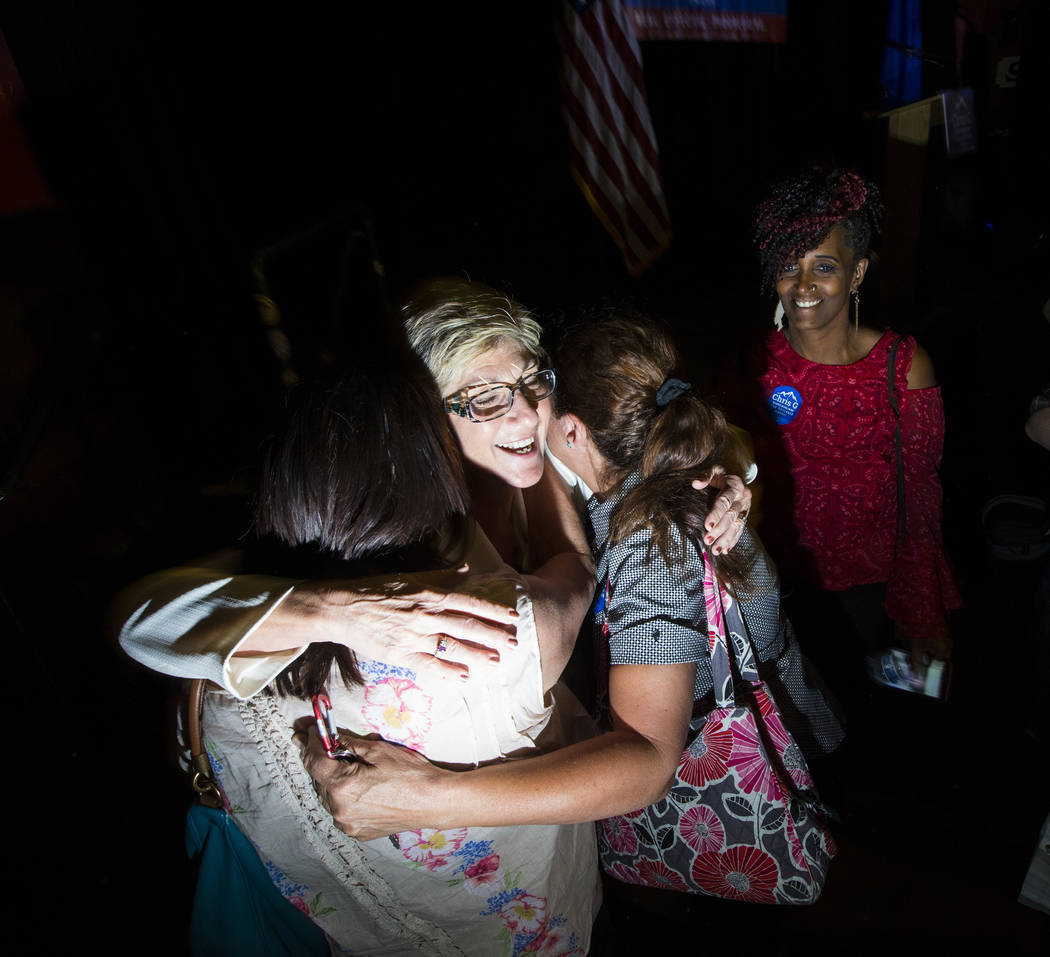 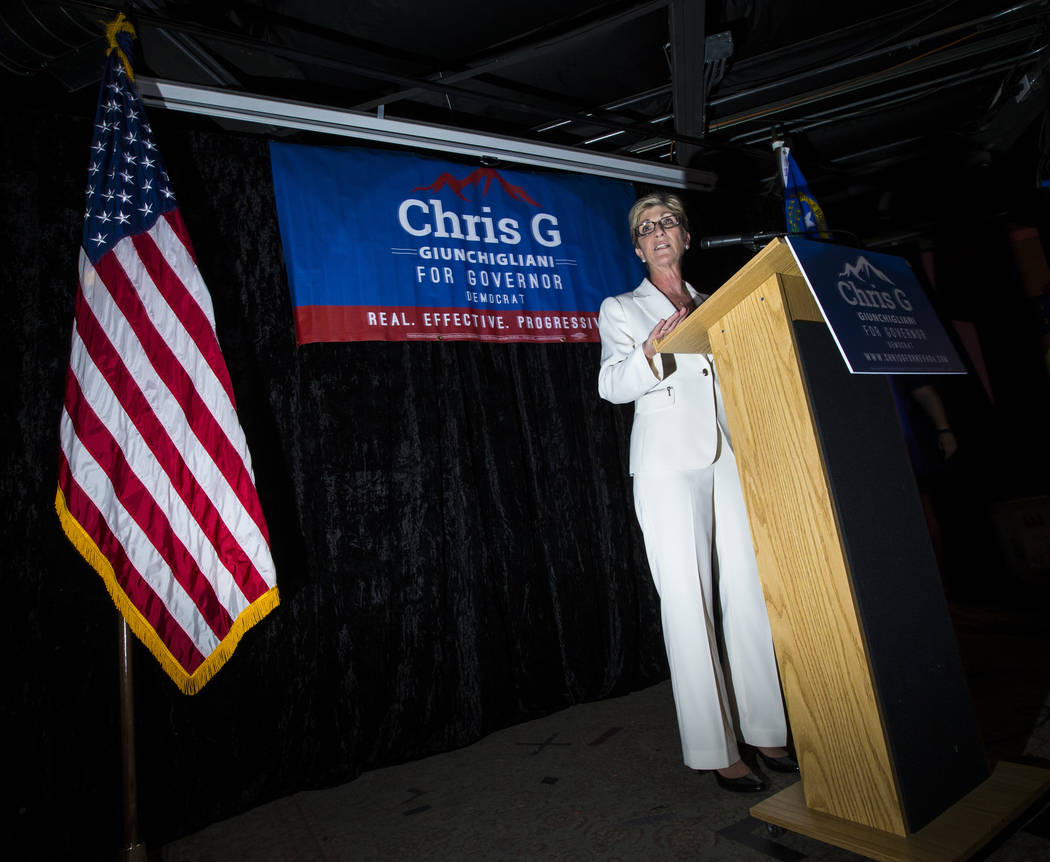 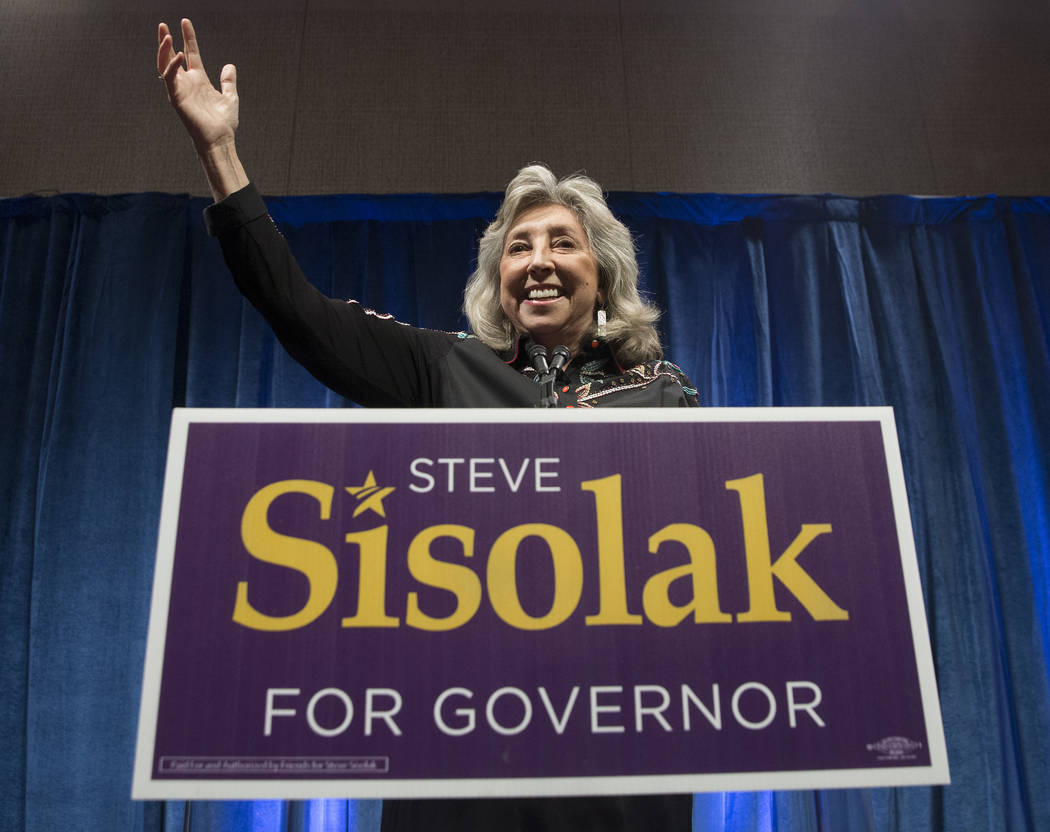 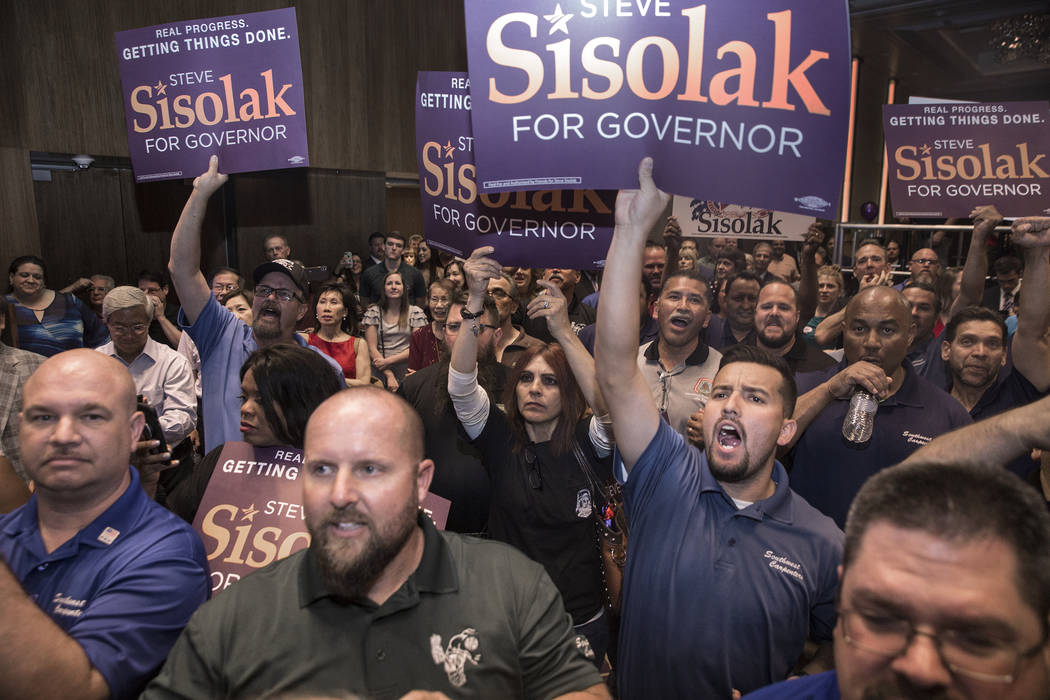 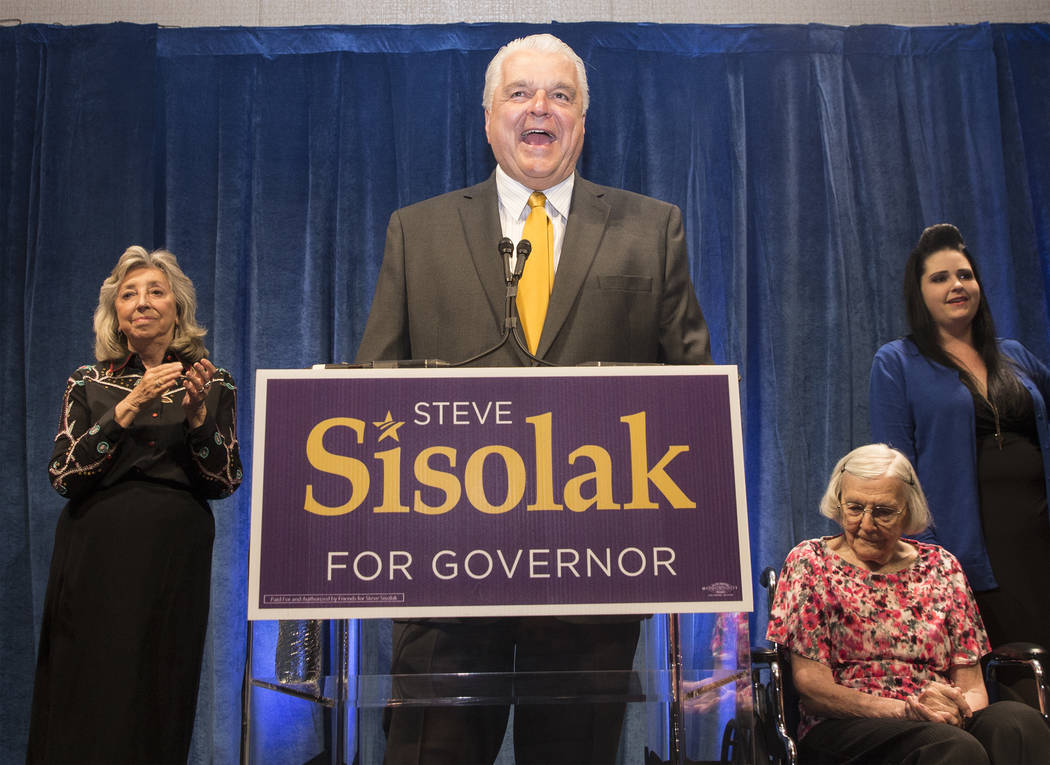 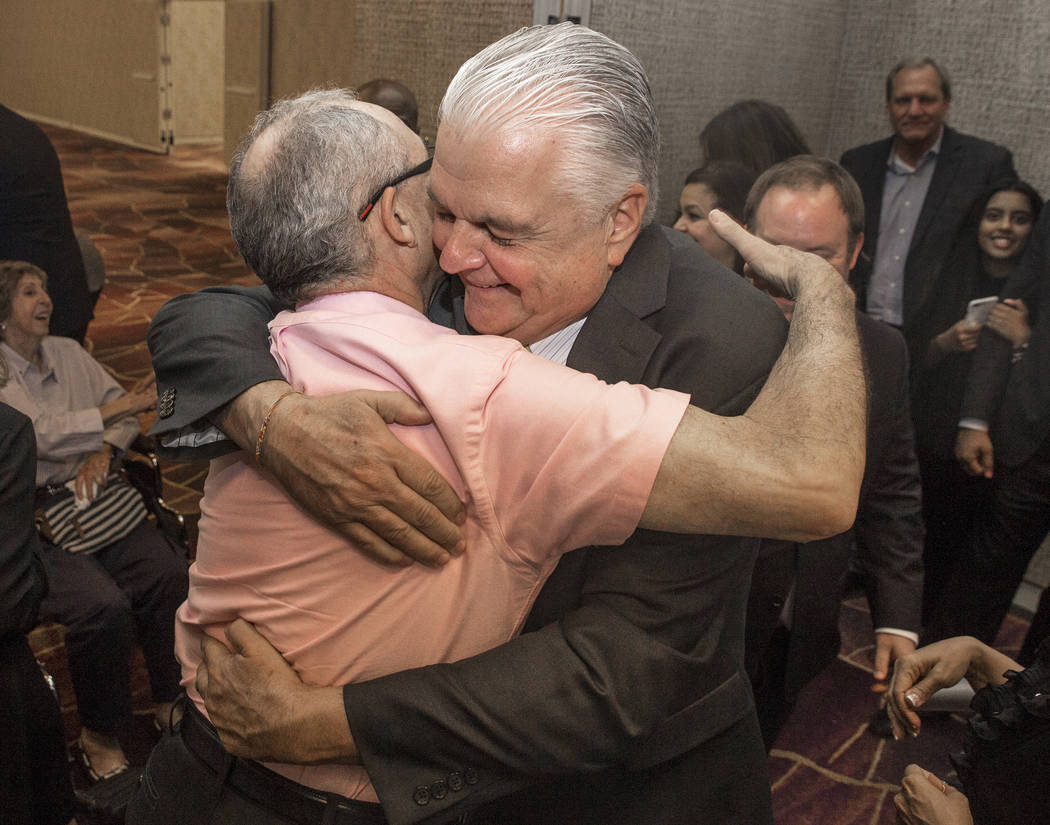 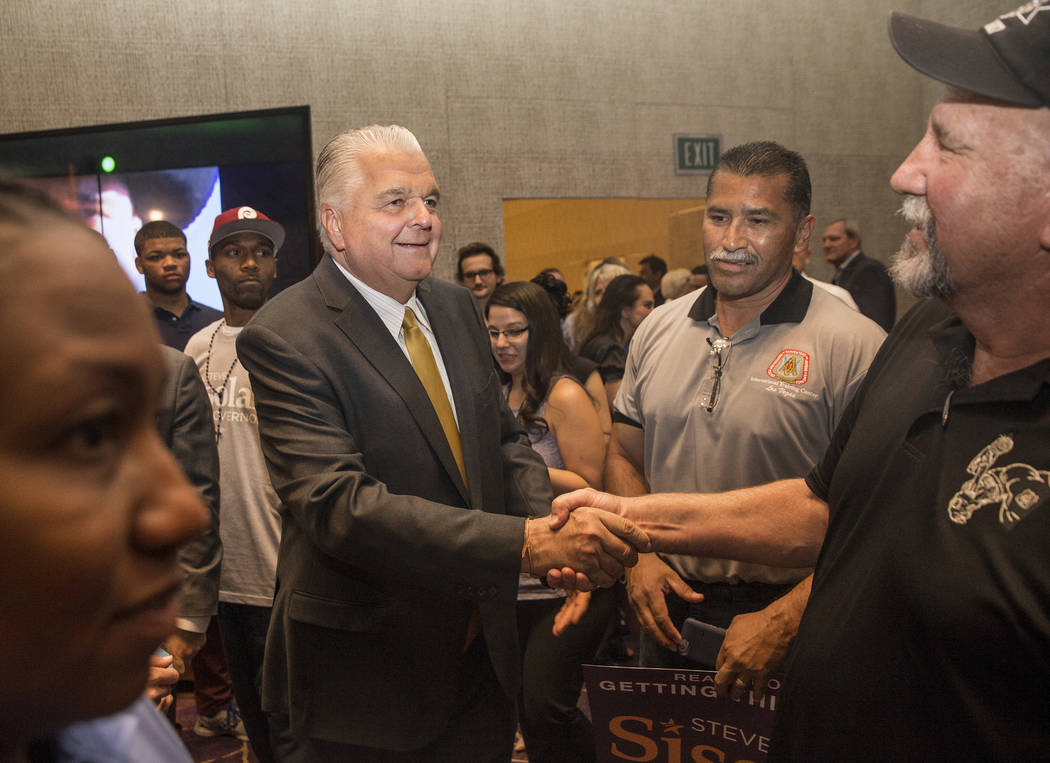 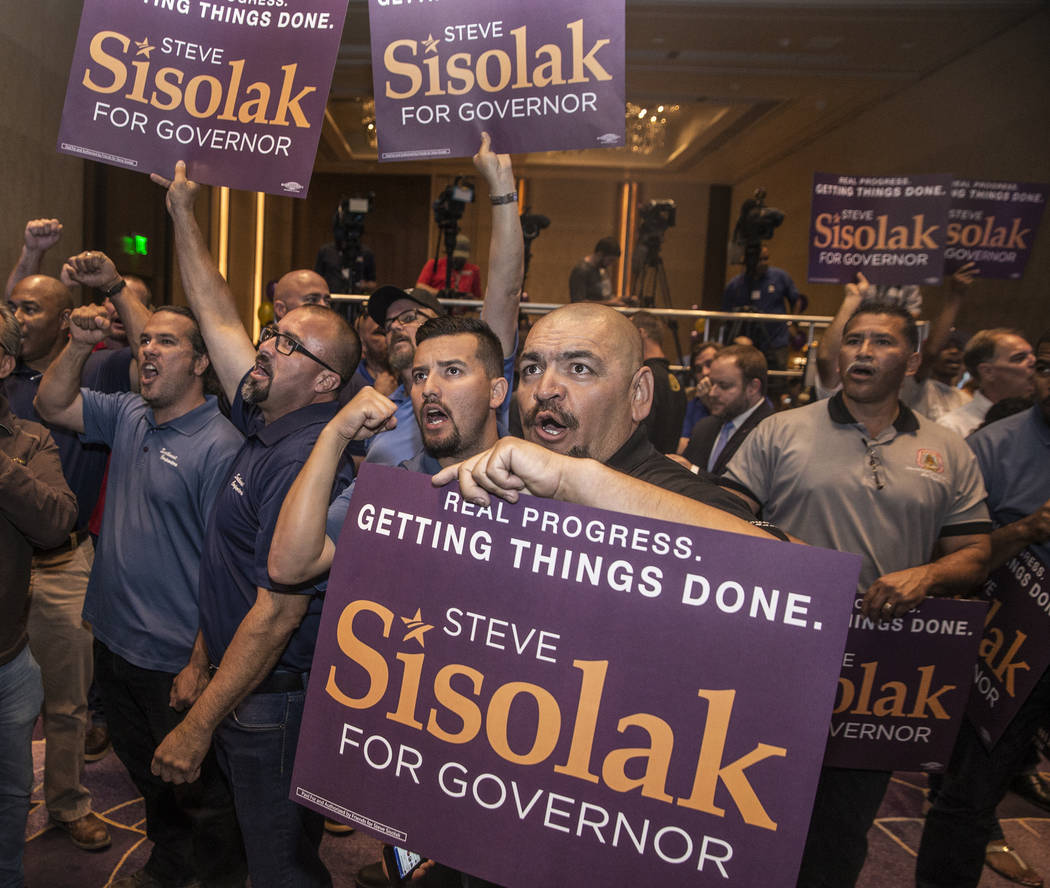 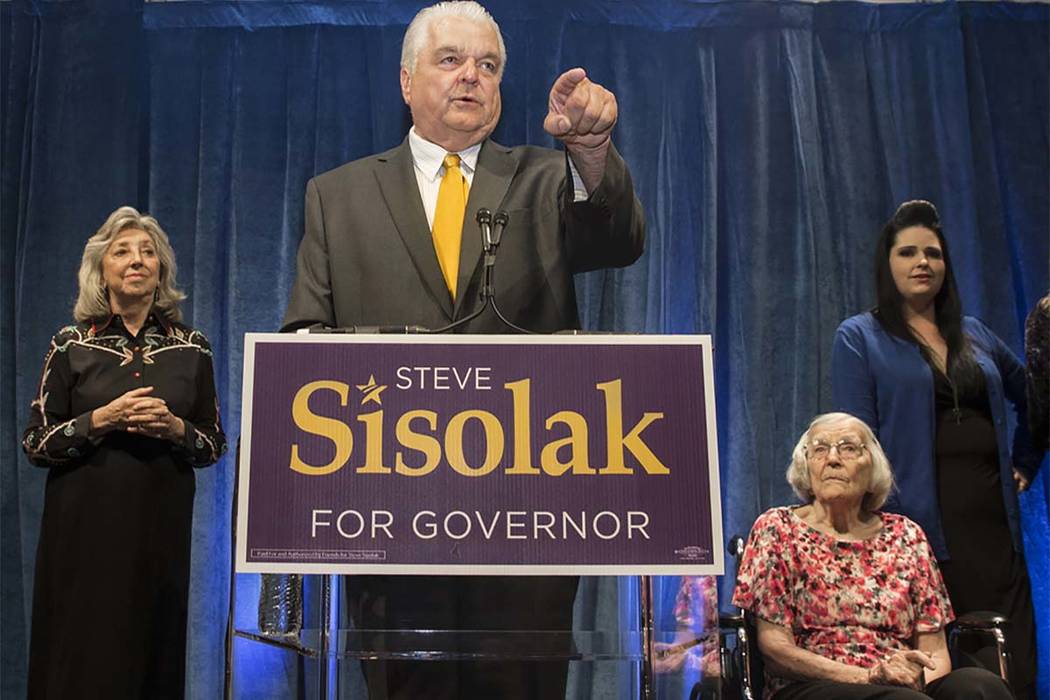 Steve Sisolak speaks to supporters at a watch party after winning the gubernatorial Democratic primary at the Aria on Tuesday, June 12, 2018, in Las Vegas. Benjamin Hager Las Vegas Review-Journal @benjaminhphoto

The Associated Press called the race at 9:16 p.m. With 100 precincts reported early Wednesday, Sisolak defeated fellow Clark County Commissioner Chris Giunchigliani by a margin of 50 percent to 39 percent. On the Republican side, Nevada Attorney General Adam Laxalt cruised to the GOP nomination after garnering more than 71 percent of the votes.

“I believe our next governor needs to be bold. You have to get things done; you have to deliver,” Sisolak told supporters at a campaign party Tuesday night at the Aria. “Let’s work together. Give me a chance to earn your vote and your trust.”

Sisolak, who announced his candidacy almost exactly one year ago, initially cast himself as the moderate in the race for the Democratic nomination. That changed once Giunchigliani entered the race last fall.

Sisolak has the backing of influential former U.S. Sen. Harry Reid and also managed to gain the support of progressive Democrat Rep. Dina Titus, and he came in with a massive campaign cash advantage over Giunchigliani. He spent an unprecedented $6.5-plus million in the brutal battle, in which the two traded barbs with a plethora of attack ads.

“I’m not going to pretend that this was an easy race. It was tough and long,” Sisolak said. “And while Chris and I have had our differences, and we aired them out on the public airways, we both agree on one thing: Nevada families cannot afford to let Adam Laxalt become our next governor.”

The candidates agreed on most major issues, such as increased gun control. Giunchigliani keyed on Sisolak’s early campaign comments, and the race quickly became about which candidate could prove to be the more loyal progressive for the Democratic base.

And despite more than $3 million spent from outside groups Emily’s List, a national group dedicated to getting progressive women elected, and the support of the Nevada State Education Association, Giunchigliani was unable to overcome the sheer force of Sisolak’s campaign coffers. Sisolak spent more than four times what Giunchigliani’s campaign did.

At her campaign watch party at the Bunkhouse Saloon in downtown Las Vegas, Giunchgiliani was upbeat, laughing and joking during her speech to supporters after the race had been called.

“This has been an incredible run. You always have to look forward. We can’t afford to look backwards,” she said. “I had so much fun on this campaign. I had the best team. I’m blessed.”

About halfway through the last day to cast ballots in the Nevada primary election, Laxalt received a major endorsement from President Donald Trump via tweet.

I strongly endorse Adam Laxalt for Governor of Nevada. Adam is smart, works hard, and knows how to win. He will be a great Governor. Also, will fight hard to lower your taxes and is tough on crime!

But with his closest competitor, state Treasurer Dan Schwartz, having received only 9 percent of the vote and quickly conceding, Laxalt hardly needed the boost.

In his victory speech, Laxalt quickly turned his attention to the general election, saying that whoever emerged as the Democrats’ nominee would bring higher taxes and more regulations, which he said are “strangling” small businesses.

Laxalt, who was the youngest attorney general in the U.S. when he was elected in 2014, told the crowd gathered in a Reno event hall that either Democrat would be “a corrupt career politician who failed to solve any problems.”

“My opponent will be someone who puts political favors above Nevada interests,” Laxalt said.