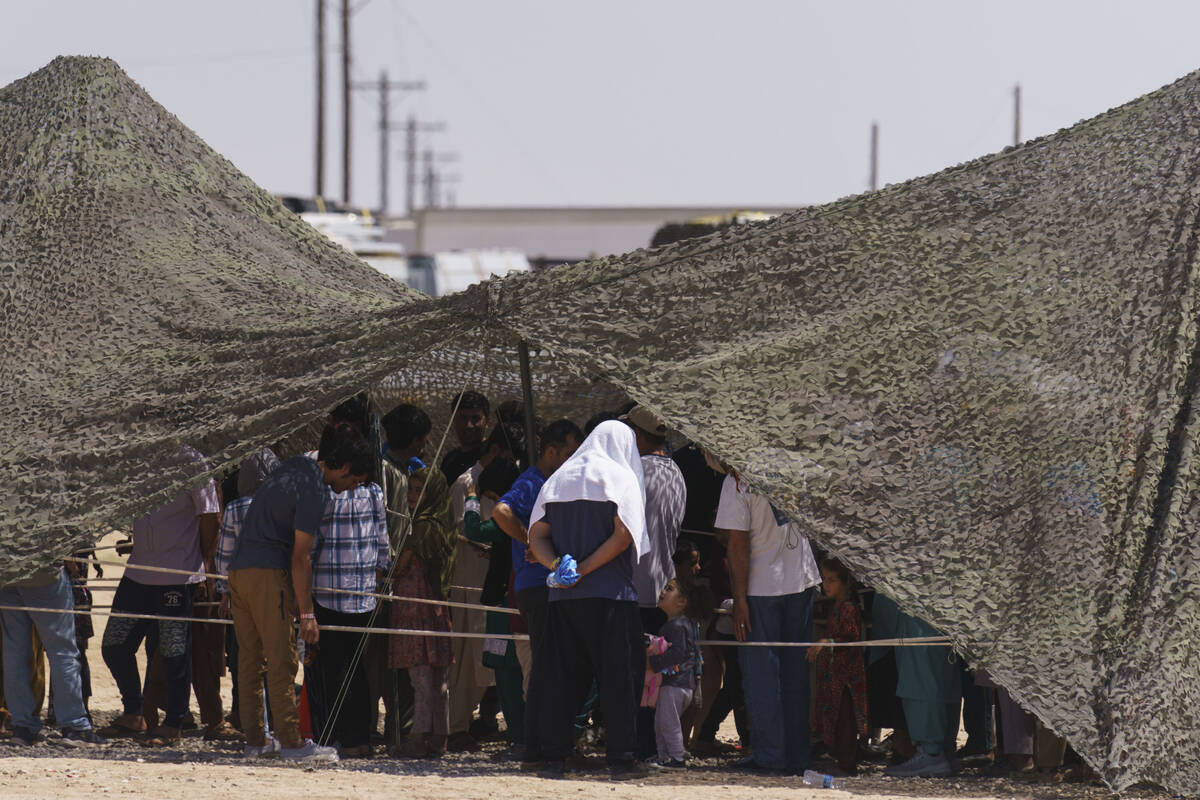 Afghan refugees line up for food outside a dining hall at Fort Bliss' Doña Ana Village where they are being housed in Chaparral, N.M., Friday, Sept. 10, 2021. Nevada is expected to receive about 150 Afghan evacuees. (AP Photo/David Goldman)

WASHINGTON — Afghan evacuees are arriving in states such as Nevada this week as Biden administration officials scramble to screen, place and seek federal aid to resettle the first wave of people airlifted from the war-torn nation, officials said Friday.

Nevada is expected to receive about 150 evacuees. Gov. Steve Sisolak said about 50 would be resettled in Southern Nevada and the rest in the north.

“I’ve said this before and I’ll say it again, Nevada is and will continue to be a welcoming state for all,” Sisolak said in a statement released from his Carson City office.

Biden administration officials, speaking to regional reporters Friday, admitted hurdles exist in the ongoing process to relocate Afghans who helped U.S. forces during a 20-year war that began after the Sept. 11. 2001 terrorist attacks.

Homeland Security Secretary Alejandro Majorkas said the evacuees were being screened at military installations abroad, before coming to U.S. bases to undergo further background checks conducted by officials from the State and Defense departments, FBI special agents and intelligence officers.

“If someone fails these checks overseas, they will not be able to board a plane to the U.S.,” Mayorkas told reporters.

The evacuees must also receive COVID-19 tests, and vaccinations for coronavirus, as well as measles, mumps and other communicable diseases. Federal officials also are working with state agencies to coordinate relocation and resettlement.

Former Delaware Gov. Jack Markell, tapped by President Joe Biden to lead the resettlement effort, said the number of evacuees sent to different states, particularly children, is determined mainly by the location of relatives and sponsors who will receive them.

Although the sheer volume and checks create a lumbering bureaucratic process, Markell said states have stepped up to help welcome those who left Afghanistan because of fear of persecution.

“Governors across the country have been welcoming,” Markell told reporters on a teleconference call.

In Nevada, the Governor’s Office for New Americans — with assistance from the Southern Nevada Catholic Charities and other charity organizations such as the African Community Center — are helping evacuees resettle into communities.

Biden also is pressing Congress to approve a $30 billion aid package to help pay for resettlement, and to expedite the process to issue special immigrant visas so that Afghan evacuees can access health and nutrition benefits.

But officials admit they can’t answer questions about the total number of refugees that each state will receive and when.

The Nevada Republican Party criticized the administration and Sisolak for the process, the screening, and the lack of specifics about resettlement.

“With so many risks and unknowns, it begs the question: Why would Governor Sisolak so willingly put Nevadans at risk without doing his due diligence?” asked Jessica Hanson, the Nevada Republican Party’s executive director.

Hanson noted the state continues to battle its own crisis with COVID-19, and has the nation’s highest unemployment rate at 7.7 percent. “Why welcome an unknown risk?” she asked.

Sisolak said in a statement that he is proud of the state’s long-standing tradition of helping refugees who flee persecution and seek safety for their families.

“We stand ready to support the resettlement efforts in our state and the Afghan families seeking refuge in Nevada,” Sisolak said.

Markell also applauded public officials in states led by Republicans and Democrats for their efforts.

Mayorkas told reporters the administration is still processing evacuees and must still determine how many additional refugees will be sent to certain states, based on criteria that includes services, support systems and possible employment.

He also said that any evacuee who fails background checks, or health and other screenings, would not be allowed to board airplanes from foreign bases to U.S. installations and eventual resettlement locations.

Most states will get refugees

So far, only four states — Hawaii, South Dakota, Wyoming, West Virginia and the District of Columbia — are not receiving evacuees during this first wave of 37,000 people.

But California, Texas, Virginia, Maryland and other states are receiving thousands of people.

Many of the people who were evacuated and eligible for resettlement worked with the U.S. military and non-governmental organizations during the two decades that American troops were in Afghanistan. The Nevada National Guard deployed 1,250 troops and 700 airmen in Afghanistan during the conflict.

Republican Rep. Mark Amodei said he was able to help locate and secure the evacuation of a translator, who was an American citizen, along with his wife and children, who were not U.S. citizens, in the last days of the war.

Meanwhile, other federal lawmakers from Nevada also worked to secure safe transportation for evacuees following telephone calls and pleadings from family members, friends and associates in the state.

U.S. veterans in Nevada have strong ties to Afghanistan. Of the 207,000 U.S. military veterans who live in Nevada, nearly 20 percent served in either Iraq or Afghanistan, according to Census Bureau figures.