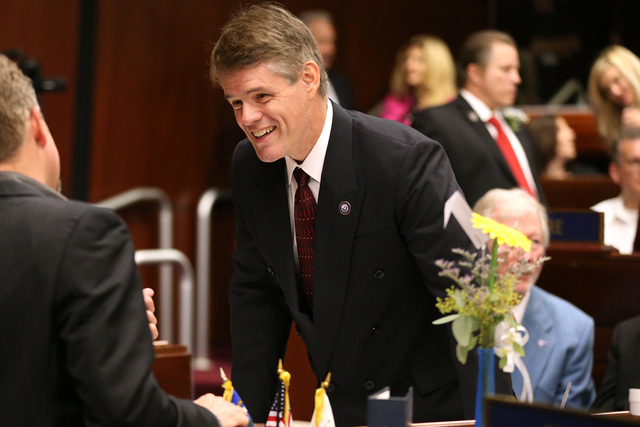 Republican Assemblyman Chris Edwards, the possible victim of an extortion attempt, is facing the potential prospect of a recall launched by Mesquite residents.

Recall Edwards PAC, a political action committee, filed paperwork on Jan. 25 with the secretary of state to explore the possibility recalling Edwards from District 19, which includes parts of Las Vegas.

The committee has three directors, David Ballweg, Kathleen Williams and Pamela Gillick, all Mesquite residents who live in the district. Its registered agent is Chuck Muth, a conservative blogger who has encouraged residents to consider recalls against Republican lawmakers elsewhere, including Assembly Speaker John Hambrick, R-Las Vegas.

He noted that Edwards’ campaign website voiced opposition to tax increases, calling prior legislative attempts to increase taxes on unemployed Nevadans the “wrong approach.” Ballweg stressed that no decision has been made yet about pursuing a recall election. A recall effort cannot legally start until 10 days after the session started, which is Feb. 12 at the soonest.

For a recall election to get on the ballot, organizers would need to get signatures from at least 25 percent of the district’s registered voters who cast ballots in the last election. That means they will need signatures from close to 4,000 people, he said.

Ballweg acknowledges that is a formidable task. The goal, if a recall is pursued, he said, would be to move quickly and get enough signatures to recall Edwards and replace him before the Assembly votes on big tax measures.

Edwards said he is working with Ballweg to resolve his concerns and head off any recall attempt.

“He and I have been in personal contact and we are working through his issues,” he said. “I think some of it is just a matter of me having enough time to communicate what is going on and what my thoughts are.

“I think they will see that I’m taking a very reasonable approach, a very rational approach, and we’ll be working with the good folks there in Mesquite,” Edwards said. “I have also been in touch with the Mesquite Women’s Republican group. They are totally on board with me.”

Edwards said that as a member of the Ways and Means Committee, he is working through Sandoval’s 6,000-page proposed budget. There are now competing budgets from the state treasurer and controller he will have to review.

“So I’m trying to give everybody a fair review and do my job to make sure we come up with the best policies for everybody,” he said. “I’ve been extremely responsive to the concerns of all my constituents. We haven’t had a vote on anything yet.”