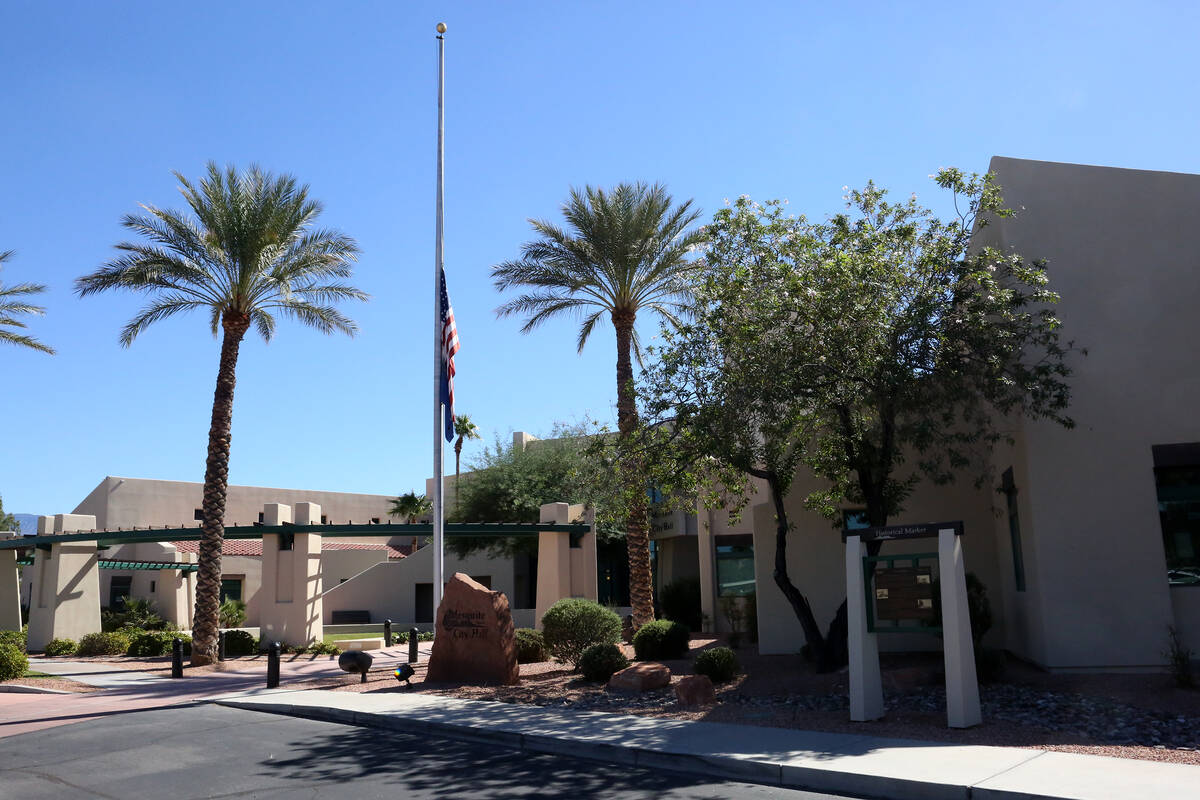 The U.S. and Nevada State flags fly at half mast in front of the Mesquite City Hall on Oct. 6, 2017. Michael Quine Las Vegas Review-Journal @Vegas88s

While three seats are up for election this year on the Mesquite City Council, only Seat 4 has more than two candidates and will appear on the June primary election ballot. The top two voter getters will face off in the November general election.

In the race for Seat 4, appointed incumbent Karen Dutkowski will have three challengers – Kim Walters, Paul Wanlass and Cathy Schiring.

Dutkowski ran for Mesquite City Council in 2020 but lost in the primary. She was nominated to fill a vacant council seat in December 2020. Upon her confirmation she said, “I don’t love Mesquite. I like Mesquite. I think it is a wonderful place to live.” She later clarified that saying, “I don’t love objects. I might really like a chair or I might really like a light fixture, or a city to visit, but love it, I am sorry. That’s me.”

In response to an emailed interview request, Dutkowski replied “Thank you for your interest and opportunity, but I respectfully decline your offer for an interview.”

Walters, Wanlass and Schiring called for more transparency on monetary issues such as the budget and spending associated with the American Rescue Plan. The council and mayor have not held any comprehensive public discussions of how that money has been spent. The city used almost $1 million in rescue plan money to provide a $3,500 bonus plus associated benefits to all city employees without public discussion or disclosure.

Walters and Schiring want to see more of that money spent to help businesses and private citizens affected by the pandemic. “I think the money could have been used in better places,” Wanlass said.

Walters wants to balance the budget without raising taxes. Schiring said it was a “total disservice” for the public to not have seen next year’s proposed budget before the recent hearings. Wanlass said if raising taxes “made perfect sense” then he would agree with it, if it was fair. “The impact of a growing city is that mill levies will increase,” he said. Wanlass was recently appointed to the Master Plan Committee.

All three candidates want a variety of resources used to pay for a proposed new fire station rather than have all of the projected $7 million cost funded from the city’s redevelopment agency, which has a $10 million balance. Schiring was disappointed that there wasn’t more pre-planning through the capital investment program to offset the cost over past years. Wanlass said more money should come from rescue plan money.

Schiring said she wants more economic development with proper zoning for businesses and increasing the number of full-time residents. She believes that would help businesses weather the hot summers better.

Wanlass, Walters, and Schiring are concerned about the rising cost of city employees which is forecasted to reach $1,000 per month per employee. They all want to look at different ways to reduce the cost to taxpayers.

Wanlass believes that one way to reign in those increasing costs is to set a base amount for benefits. If employees want more insurance over the base, for example, they would pay for the excess themselves. Schiring remarked that she has a hard time with union contract costs for employees but said the city must abide by those contracts.